The Charcoal House by rzlbd

Architect Reza Aliabadi from rzlbd describes the concept the Charcoal House like “a coconut” – harsh and strong on the outside, but warm and milky white on the inside. 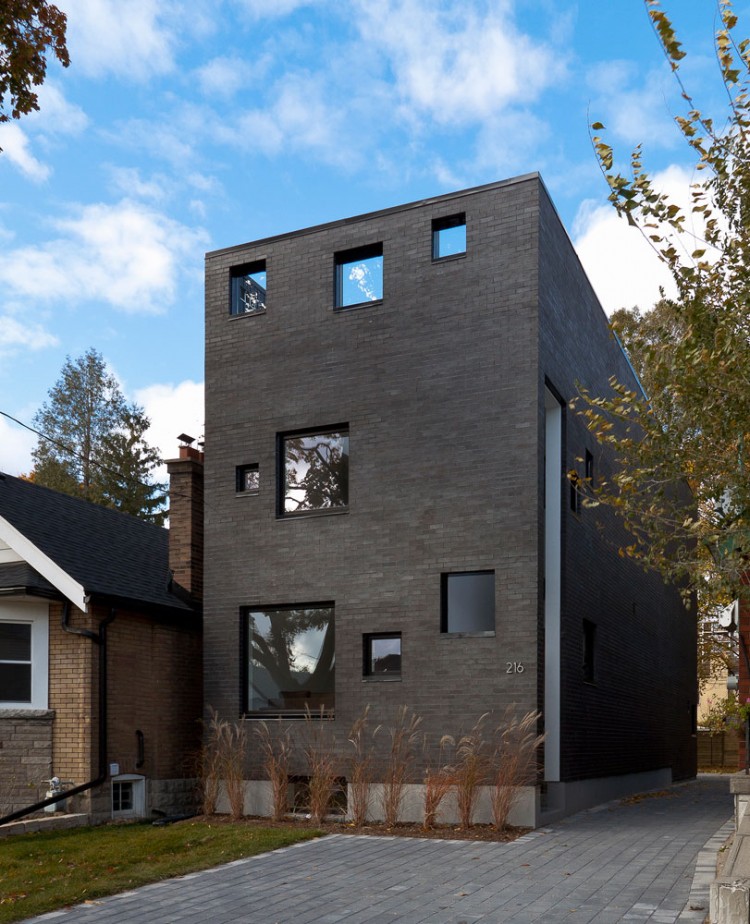 Windows have been ‘punched’ through the south-facing front facade, mimicking almost the defensive positions of a rampart.

Yet once inside, the three-story home is a play of light and open spaces.

Multiple skylights and extensive use of double-height space creates a welcoming and visually stunning home.

The Charcoal House by Atelier Rzlbd:

“Charcoal House, situated in Pape and Danforth neighborhood in Toronto, Ontario, is deceivingly presenting a raucous box. The randomly patterned square windows on its façade and the hidden entrance door at the corner of the building are elements that not only make it difficult to associate the building with a single family house, but they also trick the eye to an extend where the scale of the house is distorted and one might not be able to guess the number of floors inside.

Although the monolithic facade, the black brick cladding, states an asperous architecture, the airy spaces within the black box reveals the true identity of its functional spaces. The house as the architect describes, resembles a “coconut” which is dark and hard on the outside, white and delicious on the inside.

While it’s successful attempts to minimize physical connection to the front street creates a bizarre solitude for the building-such as the front door, which is carefully hidden inside an exterior corridor and melts into the facade around the corner of the building- this wood-framed single-family house of about 2,100 square feet suddenly transforms into a dynamic living space with a careful attention to openings and natural lights in each room, and once again deceives one’s immediate impression of disengagement from the outside by creating unexpected and glorious openings to the outside.

The Charcoal House sits on a small lot with a narrow plan. It is not a spacious house to live in, but an avant-garde mind that seeks an alternative living space is perhaps looking for a change in effects. A modern house is about a modern living style, and the Charcoal House is an attempt to provide that chance for Torontonians.”