The Bernier-Thibault home was designed by Canadian architect Paul Bernier.

Located in the Plateau Mont-Royal neighborhood of Montreal, Canada, the existing secluded townhouse was renovated and expanded by the architect to accommodate his family of four. 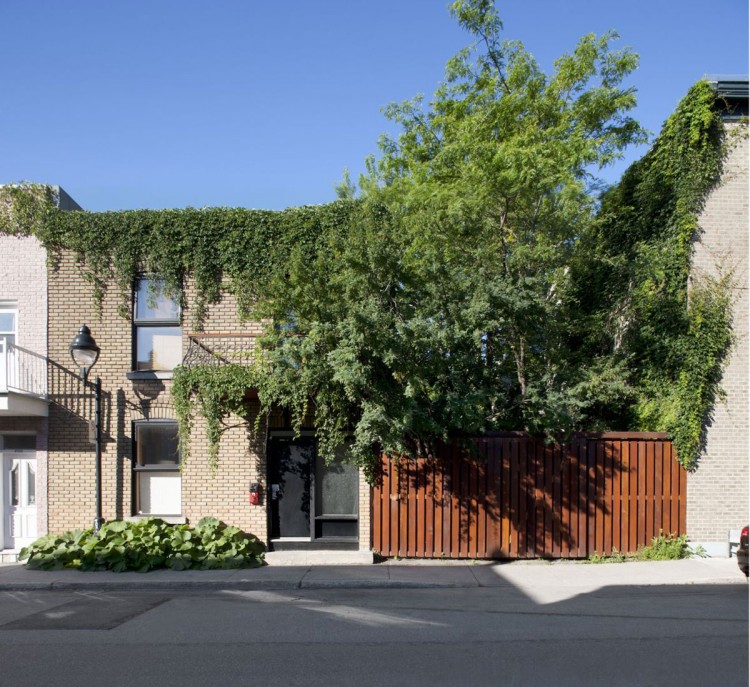 “The house is in Montreal, on a densely built block in the Plateau Mont-Royal neighborhood. An extension and a transformation of the house had to be made to allow for a family of four. Two rooms had to be added, one for the kids and one for the adults. The house also had to be rethought to make it a coherent project in its spirit and materiality. We wanted to create a house filled with natural light, appeasing, and thought with the day-to-day life in mind. So we had to extend the house and preserve the quality of the garden while working around the various zoning bylaws. The original house orientation was also a challenge since the façades that could receive windows were mainly oriented Northeast, therefore letting in little direct natural light.

Two boxes made of glass and wood, simple volumes of similar dimensions, were added to the original house. One box was placed on the roof and the other one in the garden under the big maple. A vertical slice of the original garden side wall was taken out and replaced by a wood structure wall that allows for openings on the garden and that acts as a formal link between the two boxes. The original house is veneered with brick and all new interventions are made of wood.

The box in the garden, a playroom for the children, is connected to the interior living spaces and opens up on the courtyard with wide glass doors as a pavilion in a garden. It is also covered with a green roof that blends it in the surroundings when seen from above. The box on the roof shelters the room for the parents, like a tree house for the grown-ups. It is a space lined with wood and from where we can see the city and the sunrise. That box on the roof acts also as a light well for the house below. The west corner is completely glazed and an opening was made in the floor below to allow the natural light to flow in and filter all the way to the ground floor through the semi-transparent wood trellis bridge of the second floor.

Sliding walls, semi transparent surfaces and openings allow for both the division and the interaction of the spaces.

The ground floor, the space for family life, is a ‘’L’’ shape that wraps around the garden that becomes an extra room in the summer.

The second floor, the floor of the bedrooms, is calm and airy. The bedrooms open on the circulation ‘’bridge’’ made of wood trellis that floats above the living room in a double height space filled with natural light and that offers views on the garden and the green roof.

The third floor is a refuge on the roof.

Opening up horizontally and vertically

The long wall made of sliding wood panels that separates the bedrooms from the rest of the house at night, opens up in the morning. The bedrooms then become vast and bright. They take advantage of the double height space that brings light from the third floor windows. From the bridge we can also see the living room through the semi-transparent floor and interact with the people below.

Also, in the kitchen, located at the intersection of the two wings of the ground floor, the person preparing meals has a 270 degrees overview of what’s going on through an horizontal opening that let’s you see the living room, the garden and a peek in the play room. Everywhere in the house we have tried to create openings or semi-transparent screens to let light thru and to allow spaces to interact.

Volume, the circulation bridge and stair

The stair made of steel and wood sits in this big volume opened up on three floors. We experiment this light filled space going up the stair that was designed with as few materials as possible (one central stringer, minimal railings, floating steps and the top landing in steel trellis) to emphasize this impression of an object that lets light go through.

In this space, the robust aspect of the cement rough coat wall and the steel stair reinforces this impression of ‘’being outside’’ given by the zenithal light.

The garden, an interior courtyard under the shade of trees, is defined by three buildings and a tall fence. It is a green room, the walls are clad with ivy, the ground is covered with shade plants, river stones and a flat stone path that leads to an outdoor shower. It is a space that is always cool in the summer. Its green surfaces absorb the urban murmur and give it an impression of an oasis in the city.”

A Home-Remodeling for a Young Couple in Brescia, Italy

One Comment to Bernier–Thibault Urban Home Remodeling by Paul Bernier