New York City-based studio Koko Architecture + Design has completed the transformation of a penthouse into a modern bright loft-like apartment.

Located in a 1950’s building on the 5th Avenue in New York City, the 3,800 square-foot residence with its second floor entirely dedicated to the kitchen is now a nice place to cook for an avid chef and his friends! 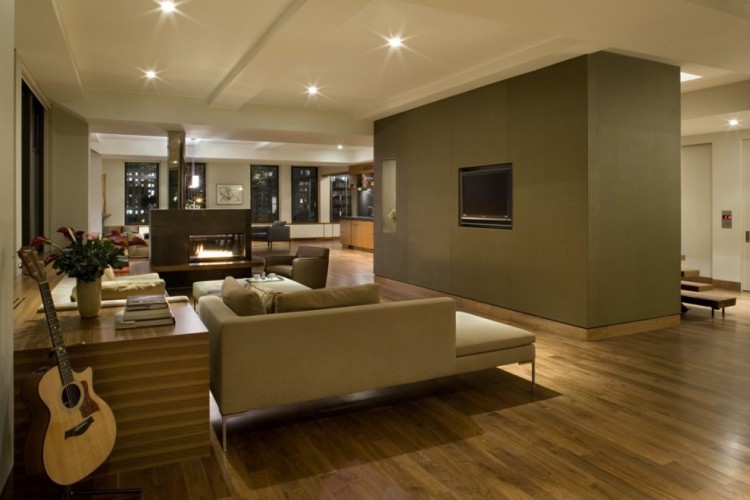 “Under the shadow of the Empire State Building, this existing Penthouse had been cut up into recording studios in the 1980’s.

Windows had been filled in with glass block, and the hot tub and sauna filled up the living room. The rooftop extension had been used as an apartment for sublet, and the rooms were dark and musty.

Interior demolition alone was not enough to transform the loft, its use had to be re-thought entirely. Rather than fill the loft with a typical residential program of bedrooms and a/v rooms, the only requirements were “a place to cook for my friends” and “a place for my books”.

The owner, an avid chef, was receptive to the idea of dedicating the second floor entirely to the kitchen. Surrounded by glass doors on both sides and skylights above, the kitchen and garden are the perfect escape from the noise of 5th avenue below. Unlike the New York City stereotype of food delivery, this kitchen is made for the pleasures of cooking.

By reversing the direction of the existing staircase, the Empire State view is brought into sharp focus. The cantilevered wood stair treads further emphasize the view, and pull light down from the two-storied skylight. On the living floor below, the entire perimeter of the loft was made free of any partitions. The windows framed by walnut cabinetry pull in the views of the city.

A new interpretation of the 1950’s built-in “conversation pit” seating is apparent as the perimeter millwork transforms from sofa to fireplace to piano bench to library seating.  The client’s extensive library of Chinese Political theory extends around the central core of the loft, and the master suite takes a secondary role to the books and food.”

The Loft of Frank and Amy by Resolution: 4 Architecture

One Comment to Empire State Loft by Koko Architecture + Design

The Living Cube by Till Koenneker