All the houses are extremely similar,  with an exclusive design and geometric shapes. 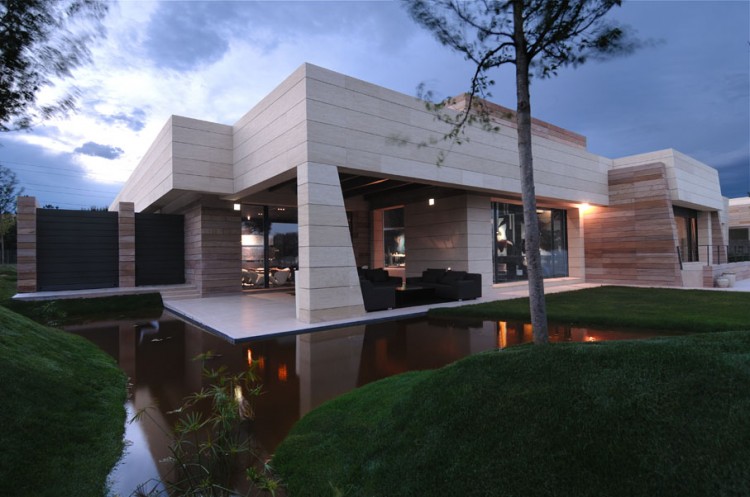 “The initial idea of this project is to integrate the house in the natural environment of the residential area in which it is. In that way, the house looks to the fantastic views of lakes and green extensions that spread over the common areas of the estate.

The structure’s house is based on game of two rectangular volumes. They are solving with clean finishes, good materials and exclusive qualities. The verandas and the pergolas, elements as volumetric as the housing, give personality to the facade.

The covering as such disappears turning into a flat roof as expression of the evolution of the creative process. The forms purity moves to the constructive scheme, to the materials and to the environment impelling the union between the building and the context where it is located. The housing, of 800m2 of surface, develops in a height. The principal access adapts itself to an area of average slope. Inside the following stays are located: foyer, room of kitchen is, dining room, office, larder, a cleaning of courteousness, seven bedrooms (with his respective baths, two dressing-rooms and a patio.

In the later part, across big large windows, there is lounge that is opened for the garden, the swimming pool and for the natural scenery that offers the urban development. It surrounds itself with a landscaping realized with attractive interventions composed by lakes, birds and a big arboreal extension. In the exterior the pedestrian ways and the central landscaped area incorporate a vegetation of indigenous character, resistant to the climate of the area. The stockades of every plot and the trees and shrubs planted along the same ones, they delimit perfectly the transit between the private ownership and the community one.”

Via Contemporist
Photos courtesy of A-cero

House in Madrid by A-cero