This amazing tram stop is located on Sergio Cardell Plaza in Allicante, Spain.

The two floating structures as well as the new traffic circle landscaping were designed by Spanish architectural firm Subarquitectura. 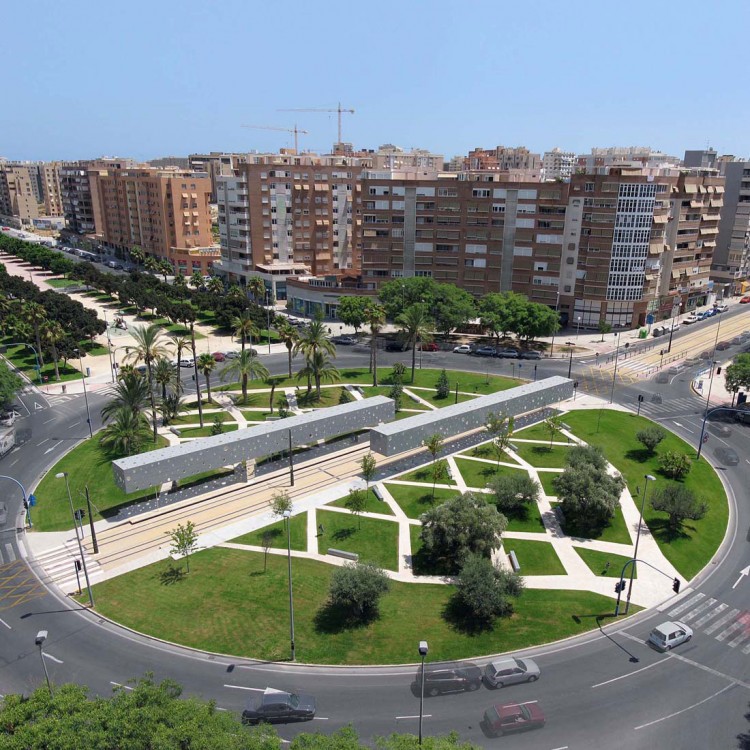 “Alicante is a 400,000 inhabitants city of the south-east Mediterranean Spanish coast. Over the last years, there has been building a new tram infrastructure, using the old rails of the local train. This line connects all the towns of the coast, ending in Denia, a northern city of the province, where ships departure to Ibiza.

This stop, is the central stage of a new line of the tram, that links the centre of the city to the residential areas of San Juan beach. The construction of the Tram Stop was the opportunity to bring back a stolen space to the city: to turn a traffic circle into a public space. Through a fractal access system deformed in each side to avoid the existing trees, the travellers can arrive in a frontal way to the platform in 32 different possibilities.

Over the platforms, 2 empty boxes (36 m long, 3 m wide, 2.5 m high) create a floating void slightly over the travellers’ heads. It matches the size of the train, creating an intermediate scale between buildings and urban elements.

There is no difference between structure and envelope, neither between roof and walls. It is an isotropic material in both conception and construction. The holes reduce the weight as increase the resistance to normal tensions, and equally decrease wind pressures among the surfaces. Light and air pass through, smoothing the shadow and generating a soft breeze in summer months.

At night the boxes are transformed into two giant lamps. Benches are spread over the garden close to the vegetation and the paths, creating a public place overlaying the quiet of the seated people and the movement of the people walking.”

Amazing Project has its Roots in Adaptable, Robotic Structures

Fernando Abellanas Designed a Small Studio Hidden Under a Bridge in the City of Valencia, Spain

The Loft #2 by The Playing Circle