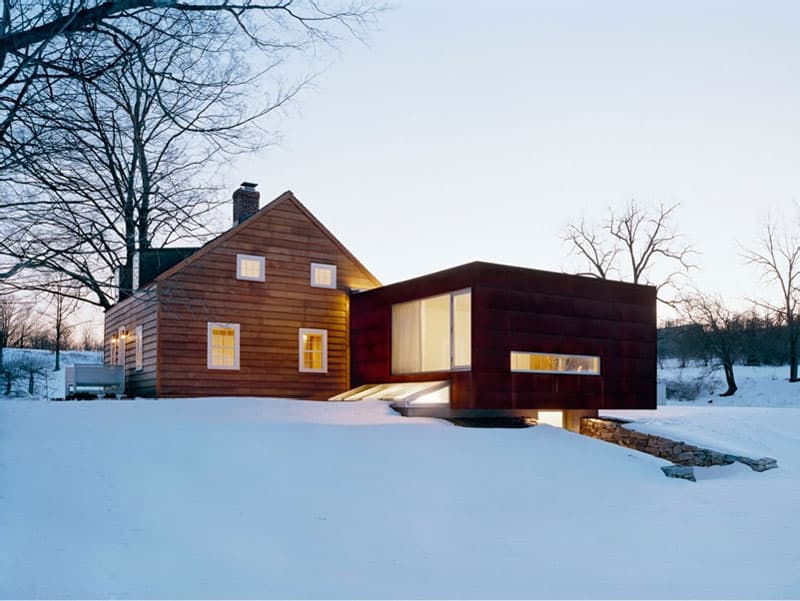 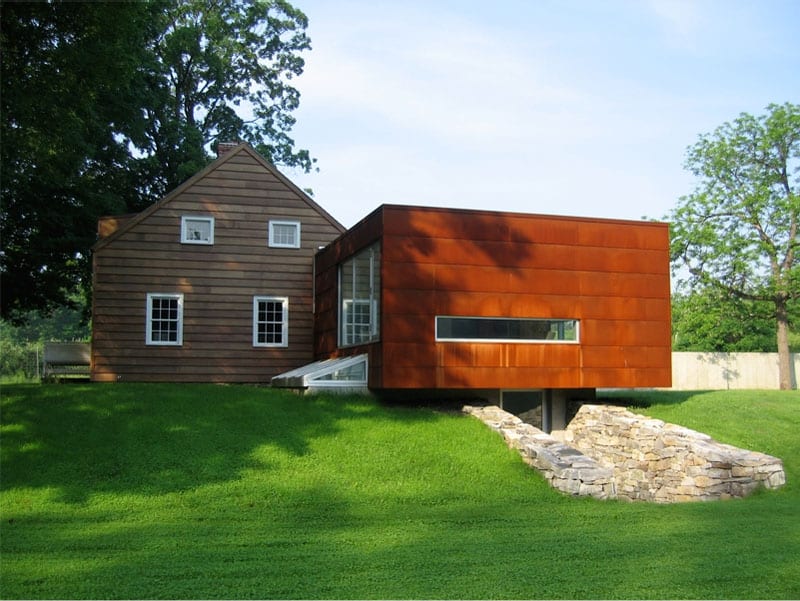 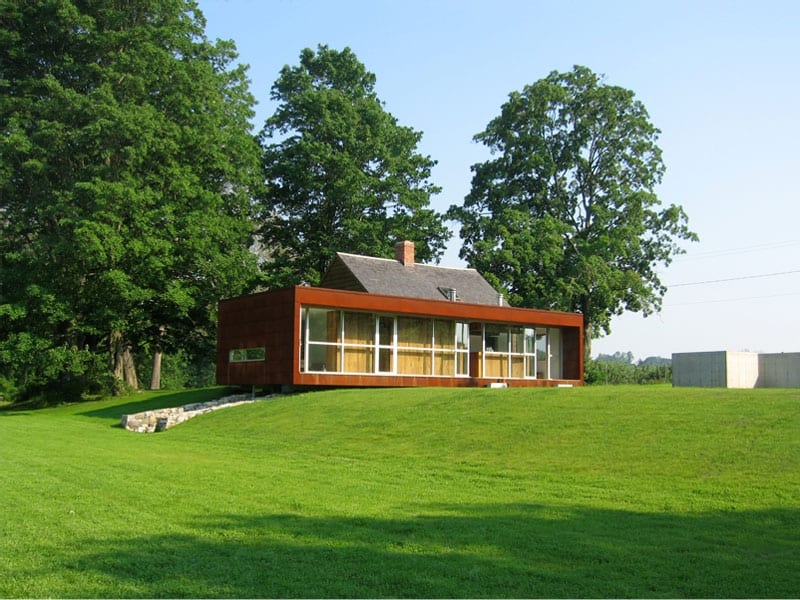 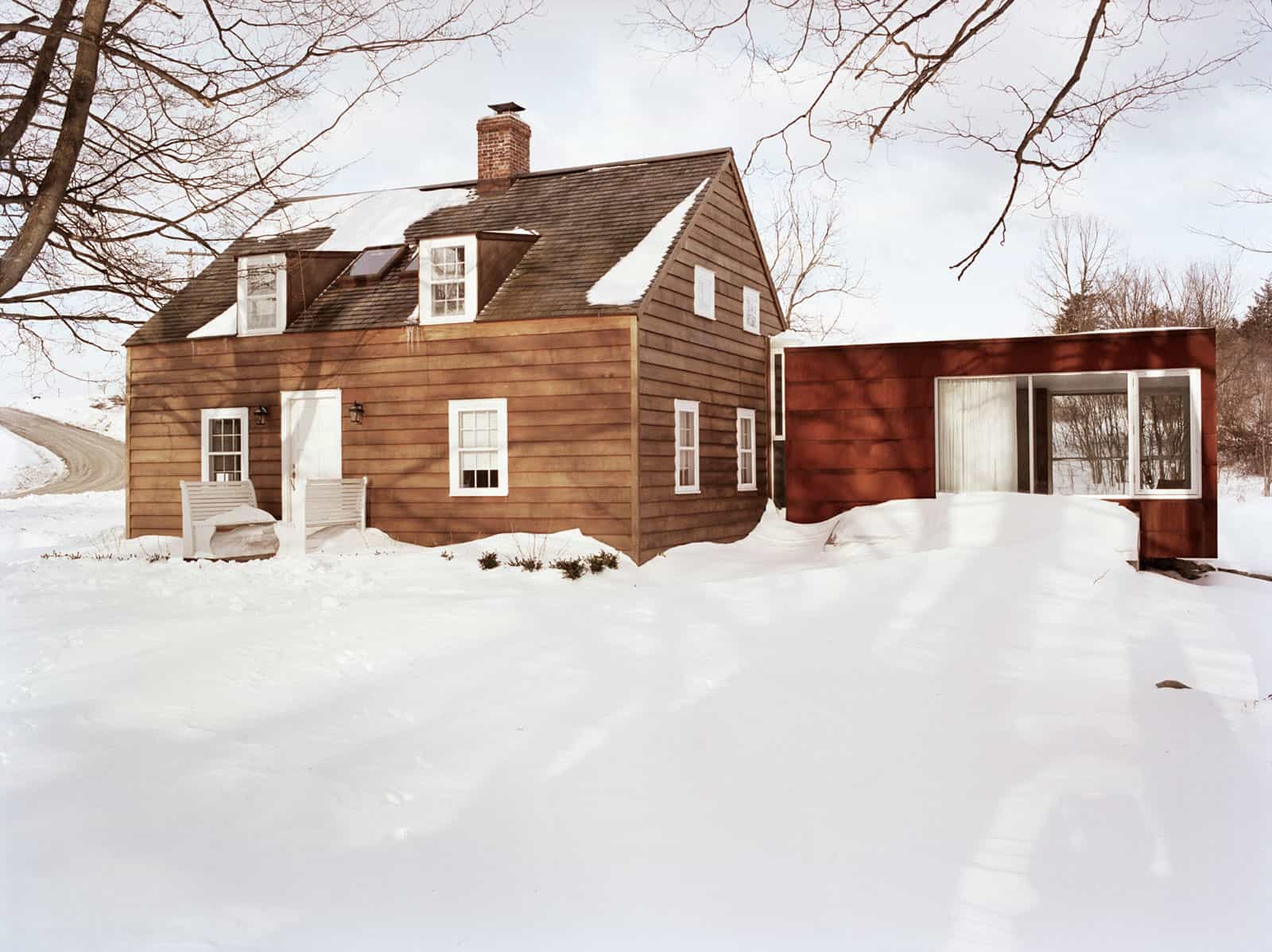 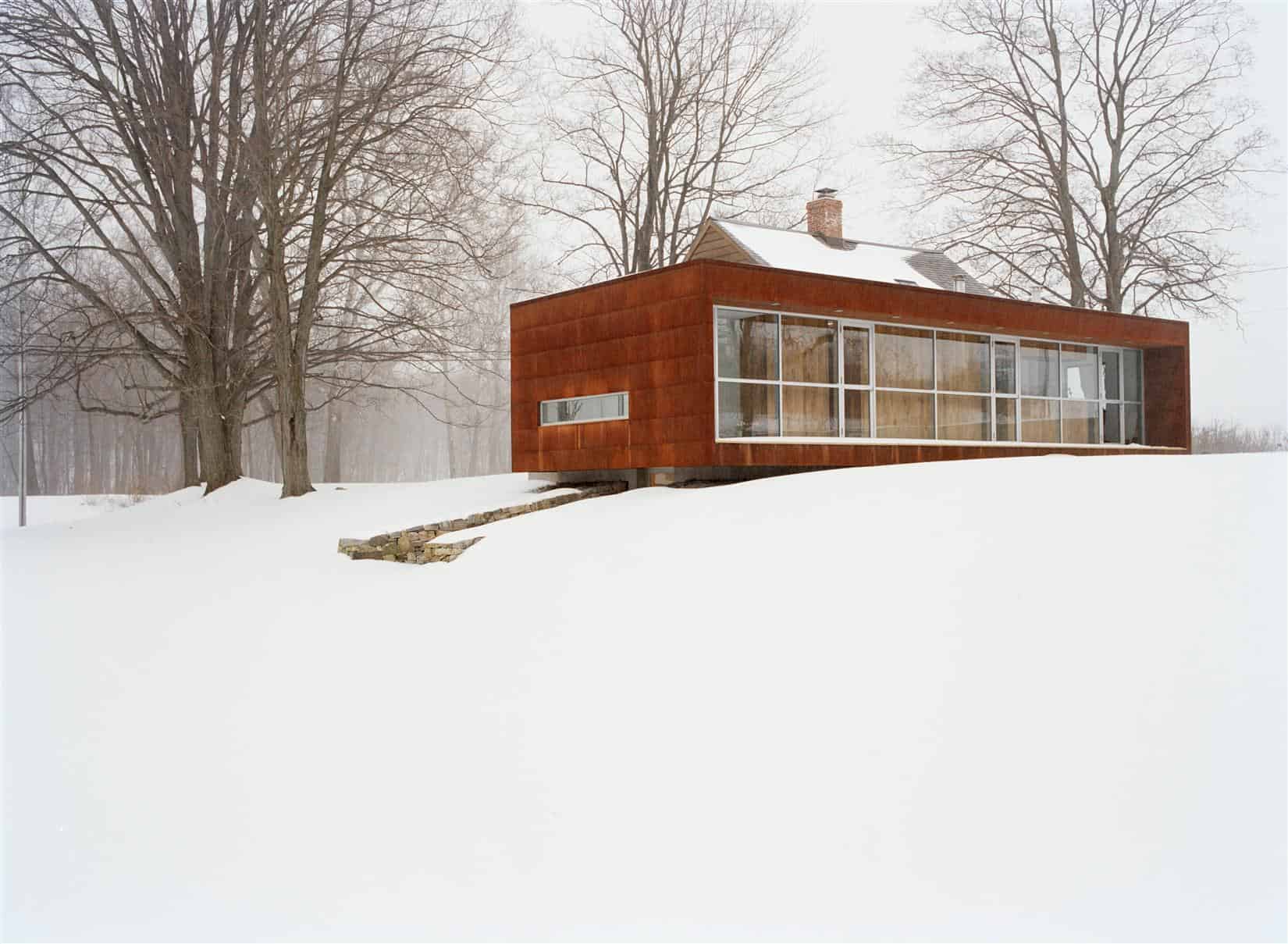 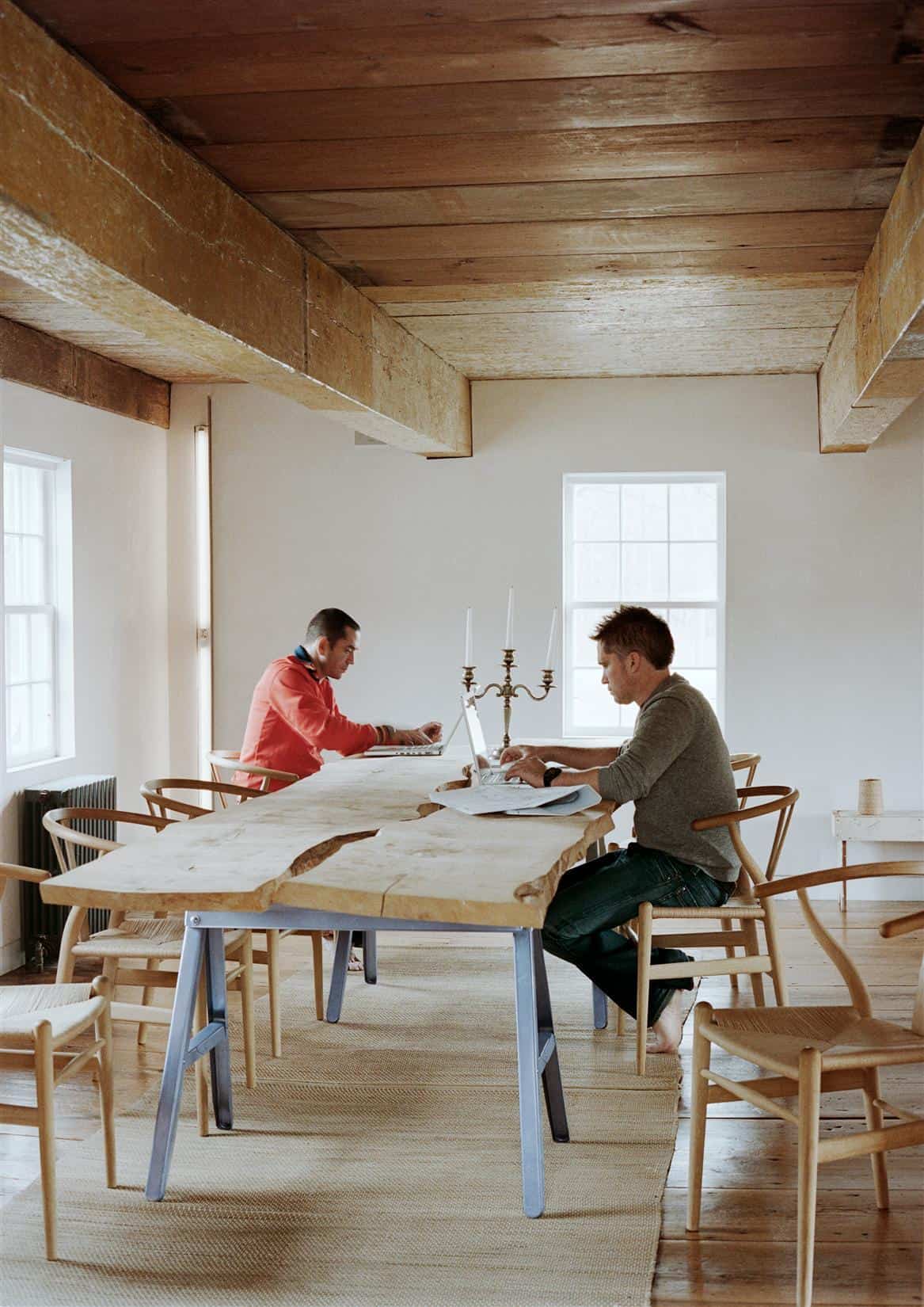 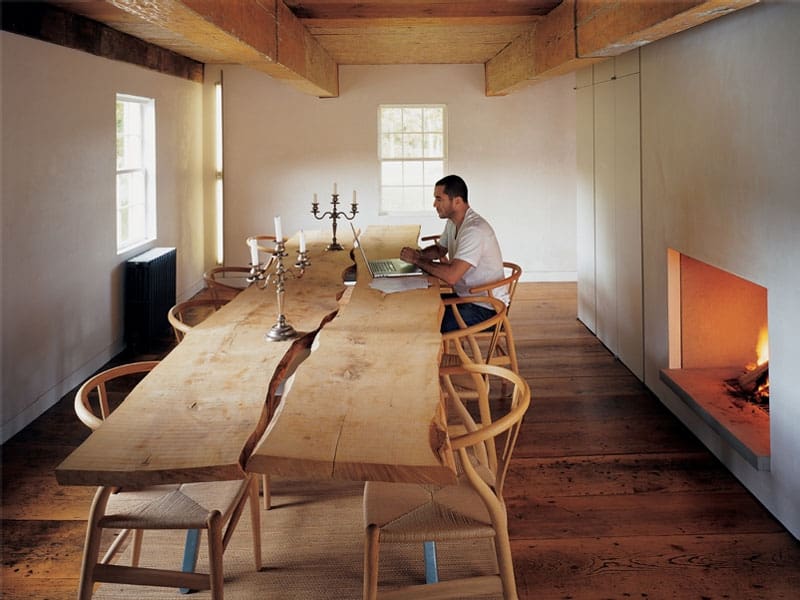 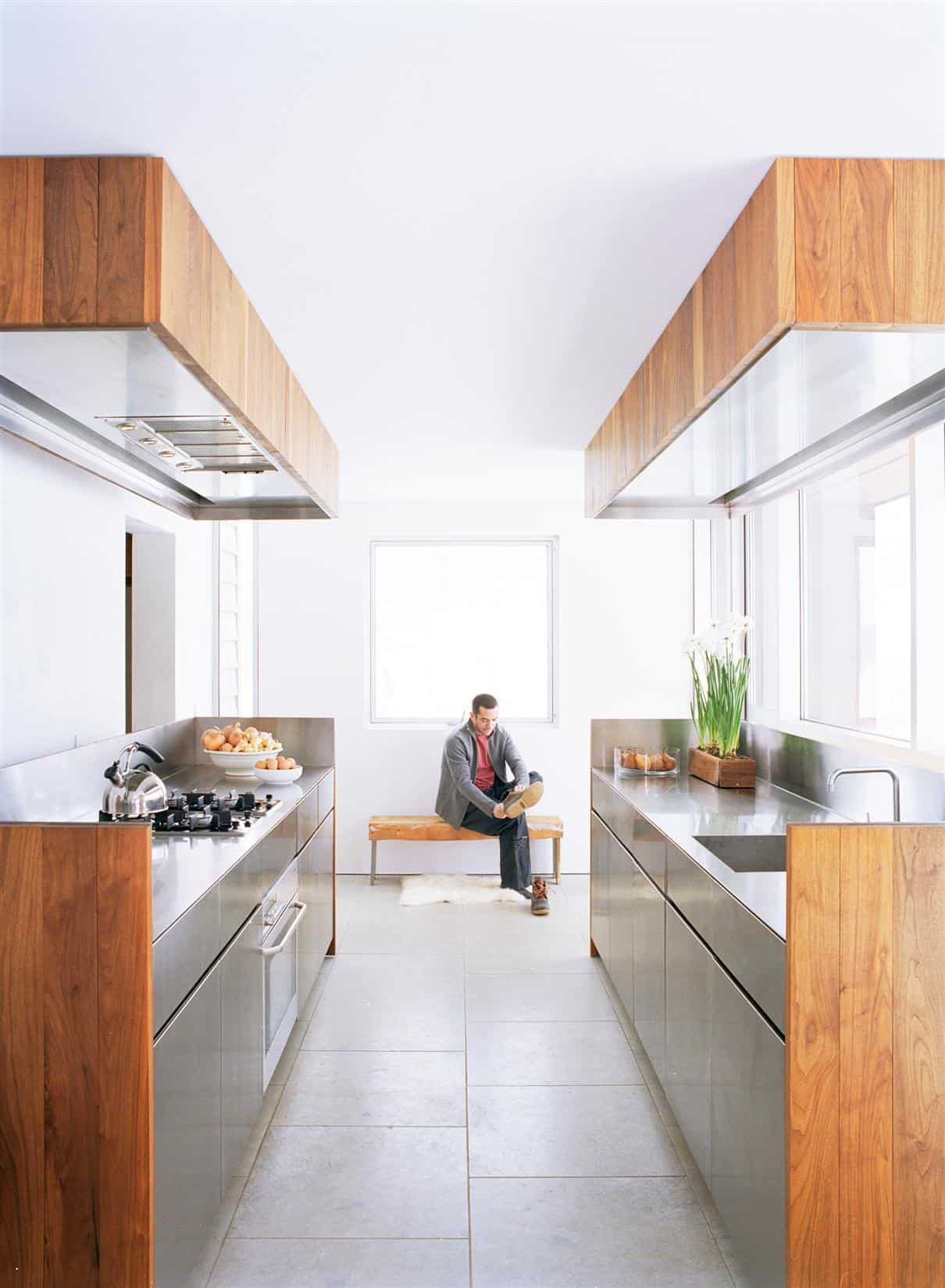 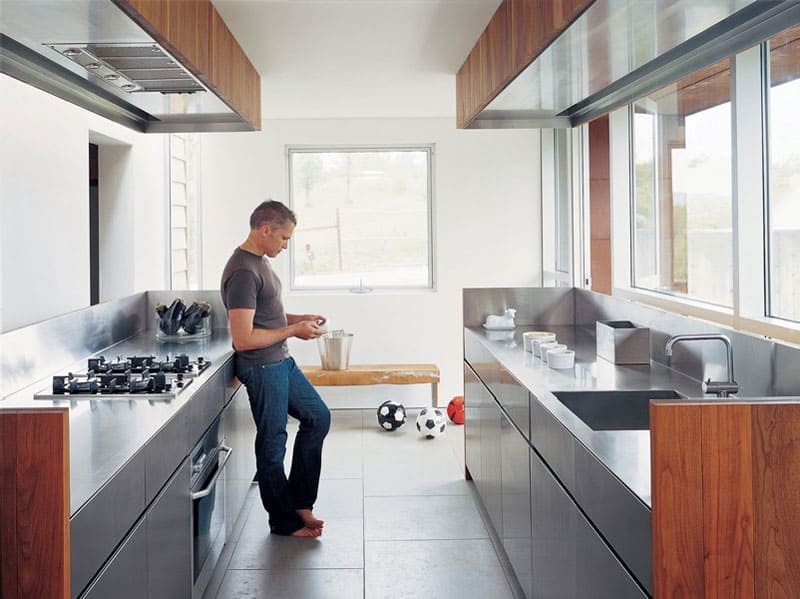 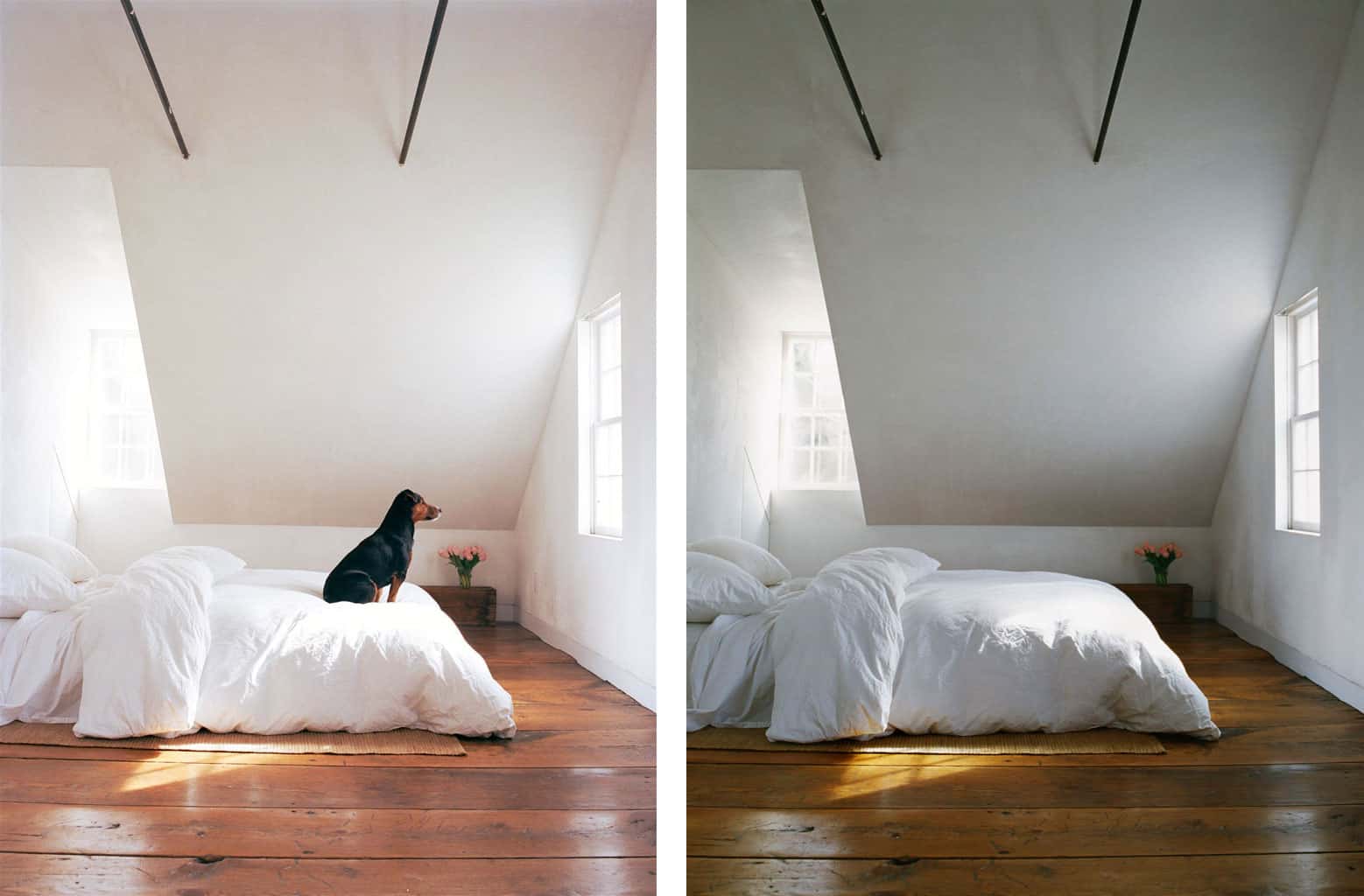 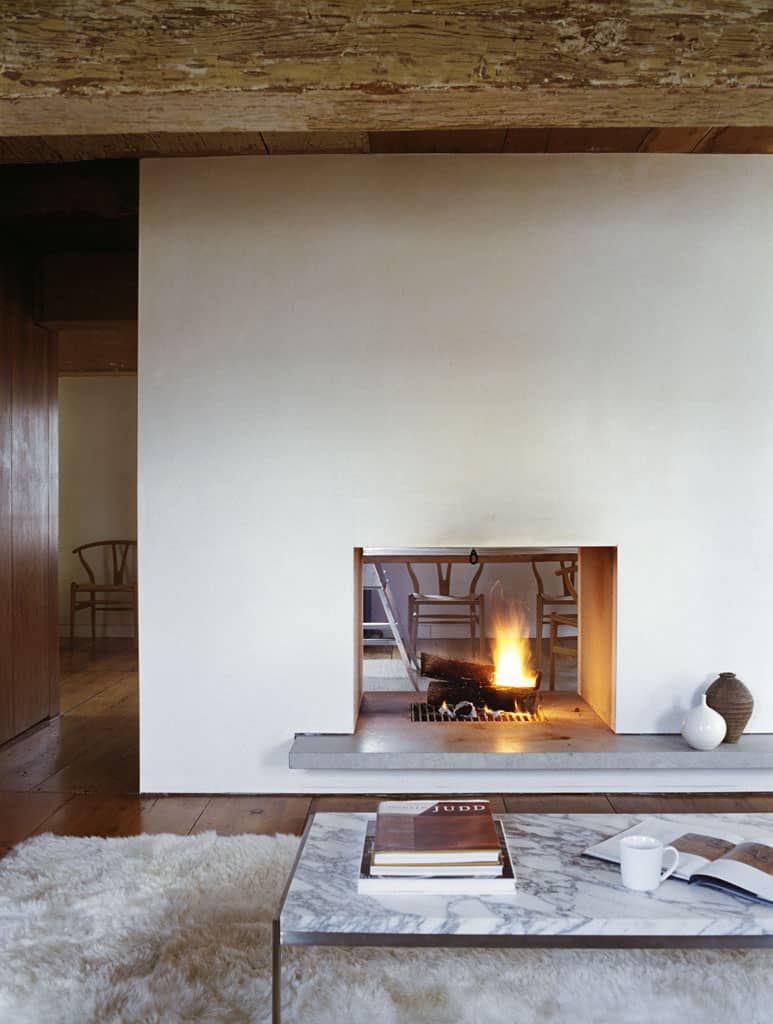 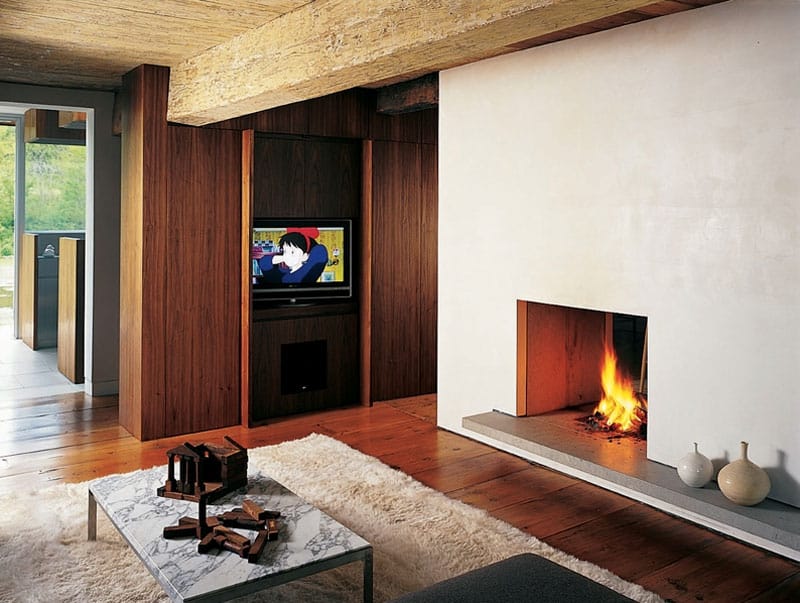 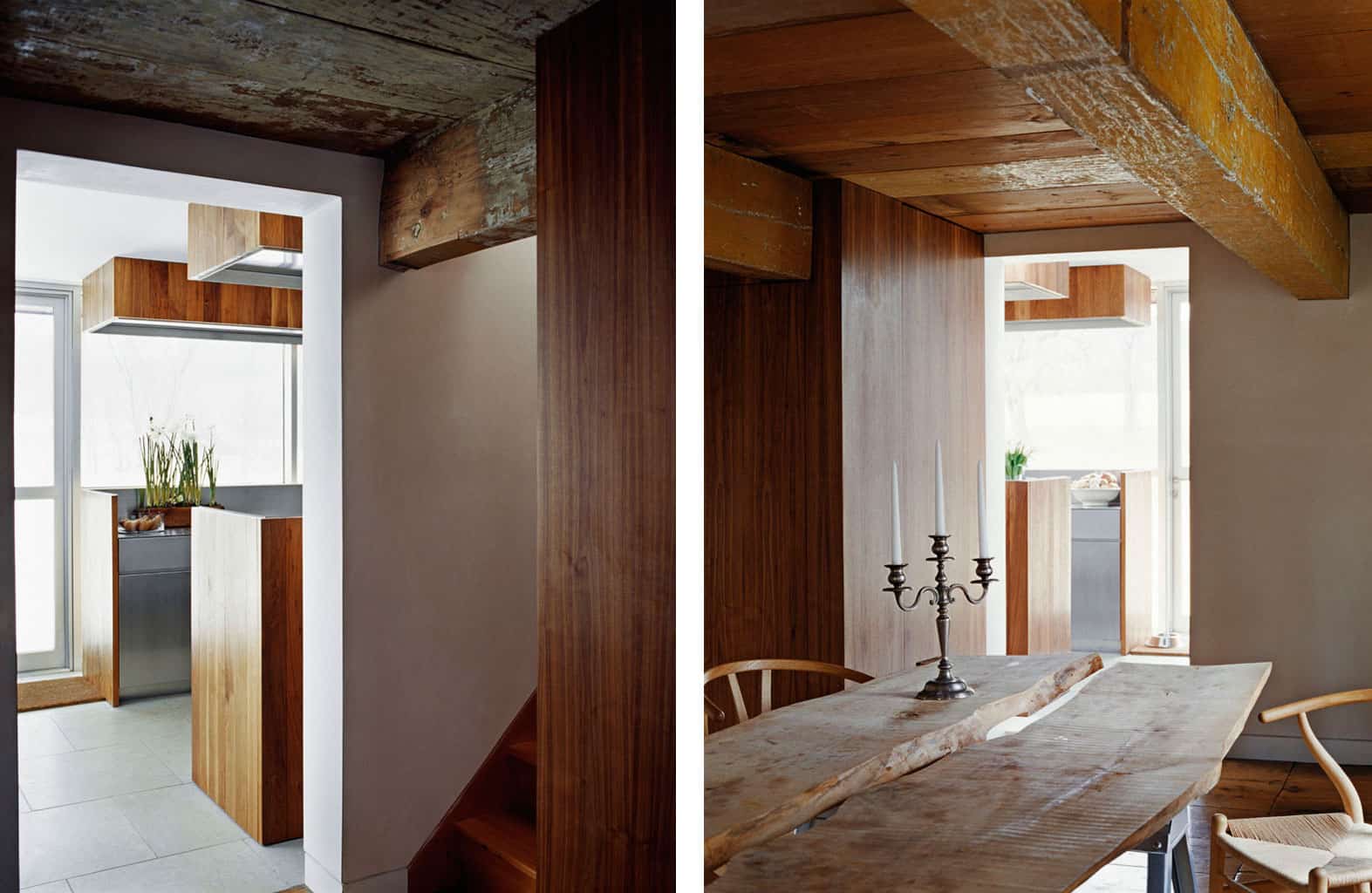 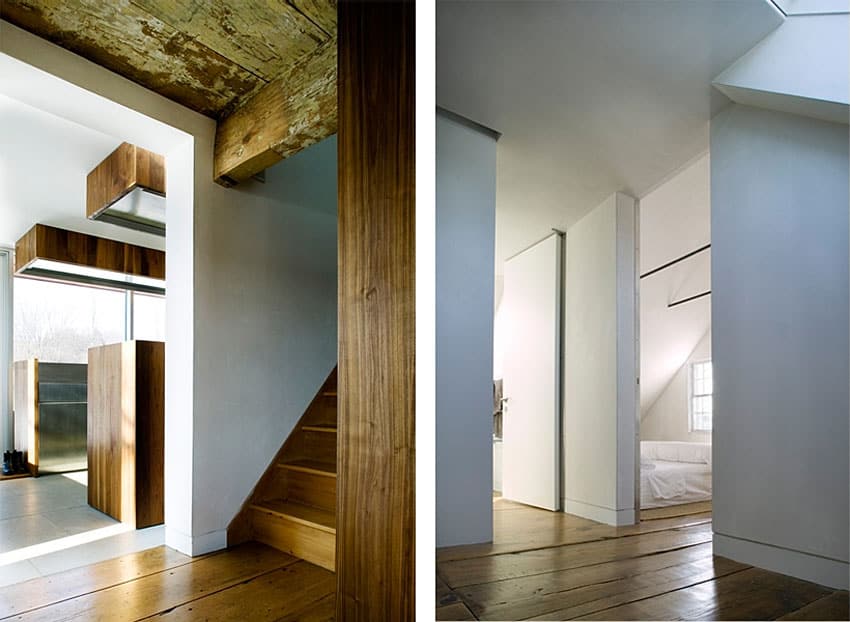 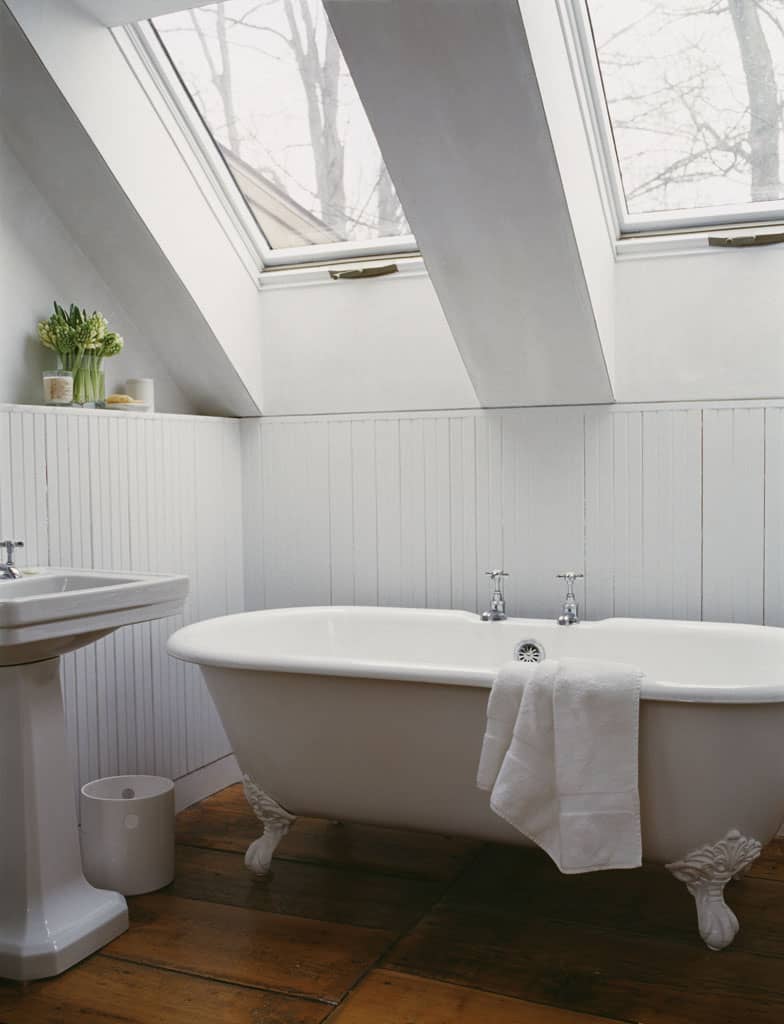 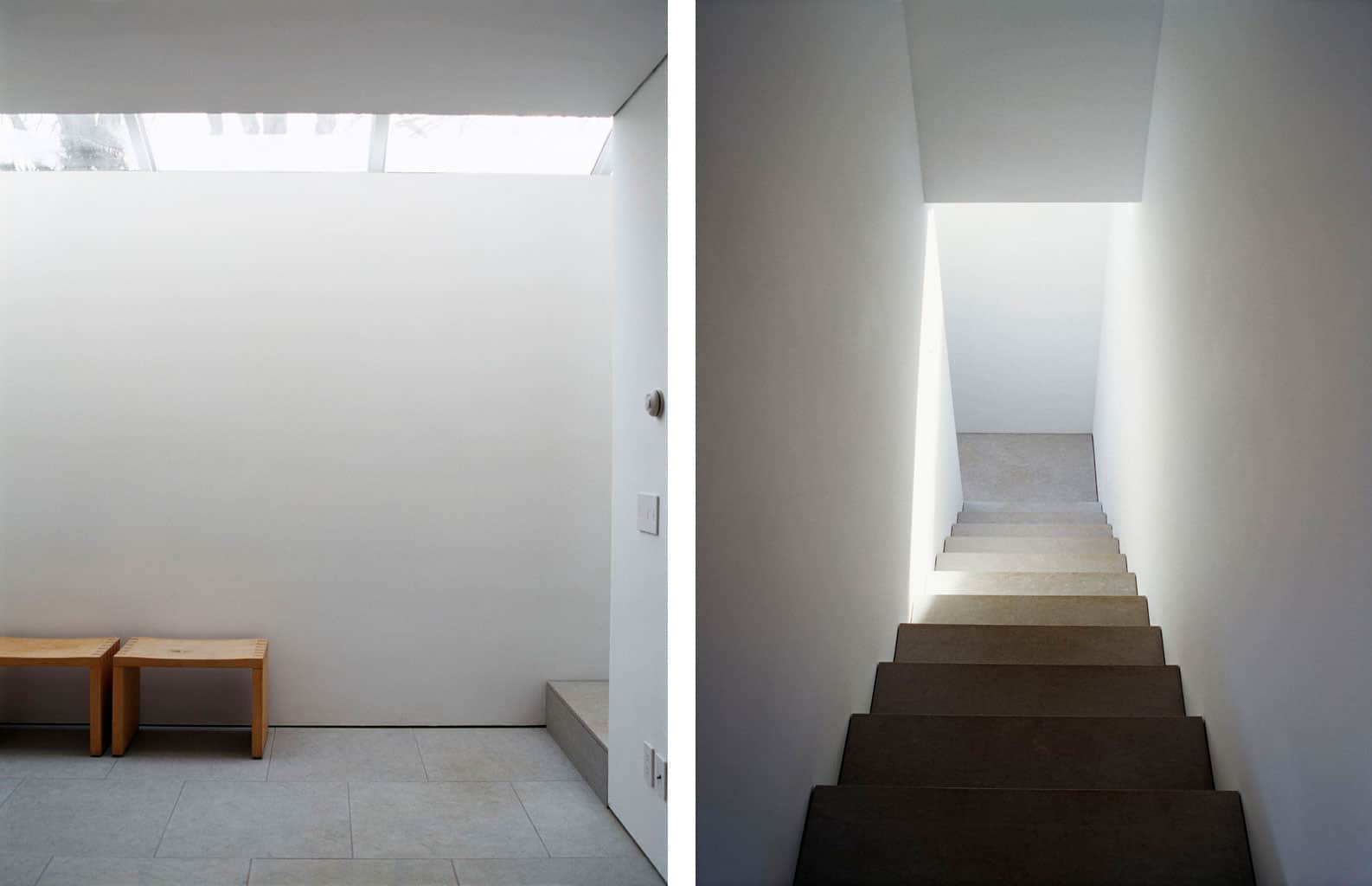 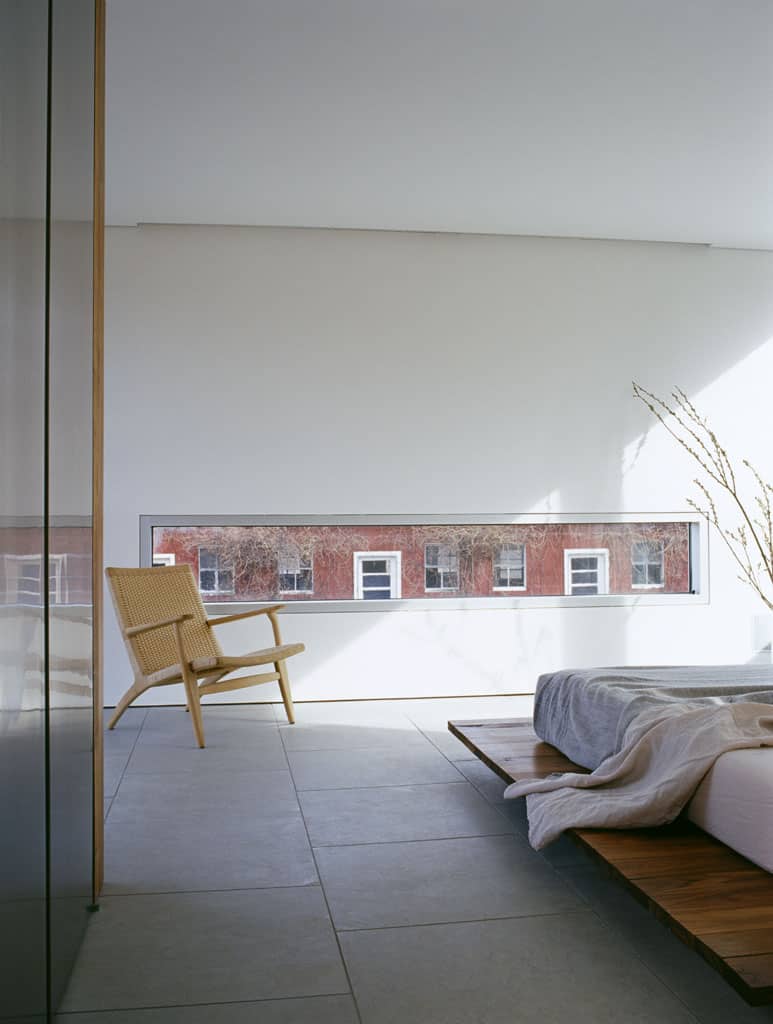 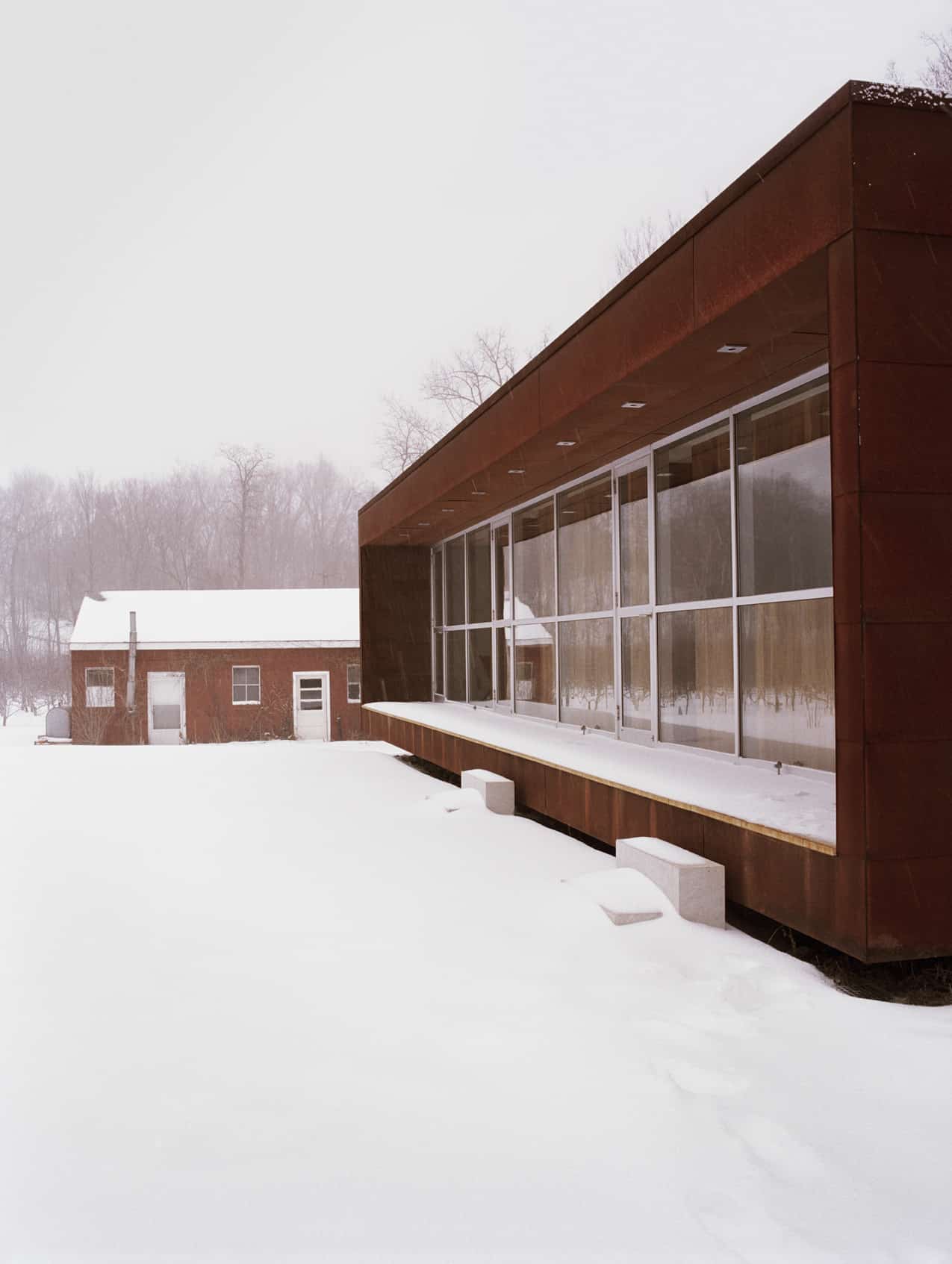 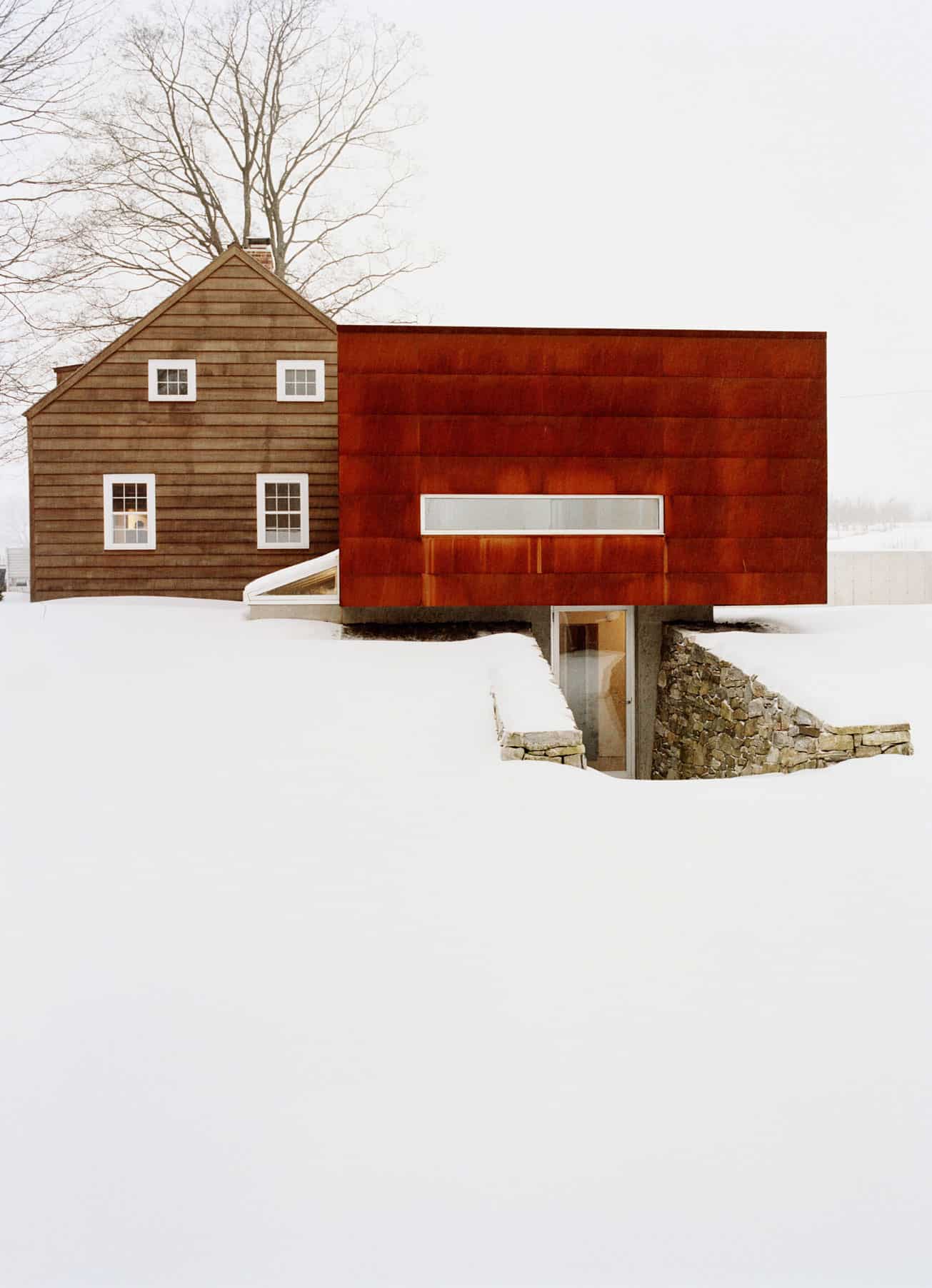 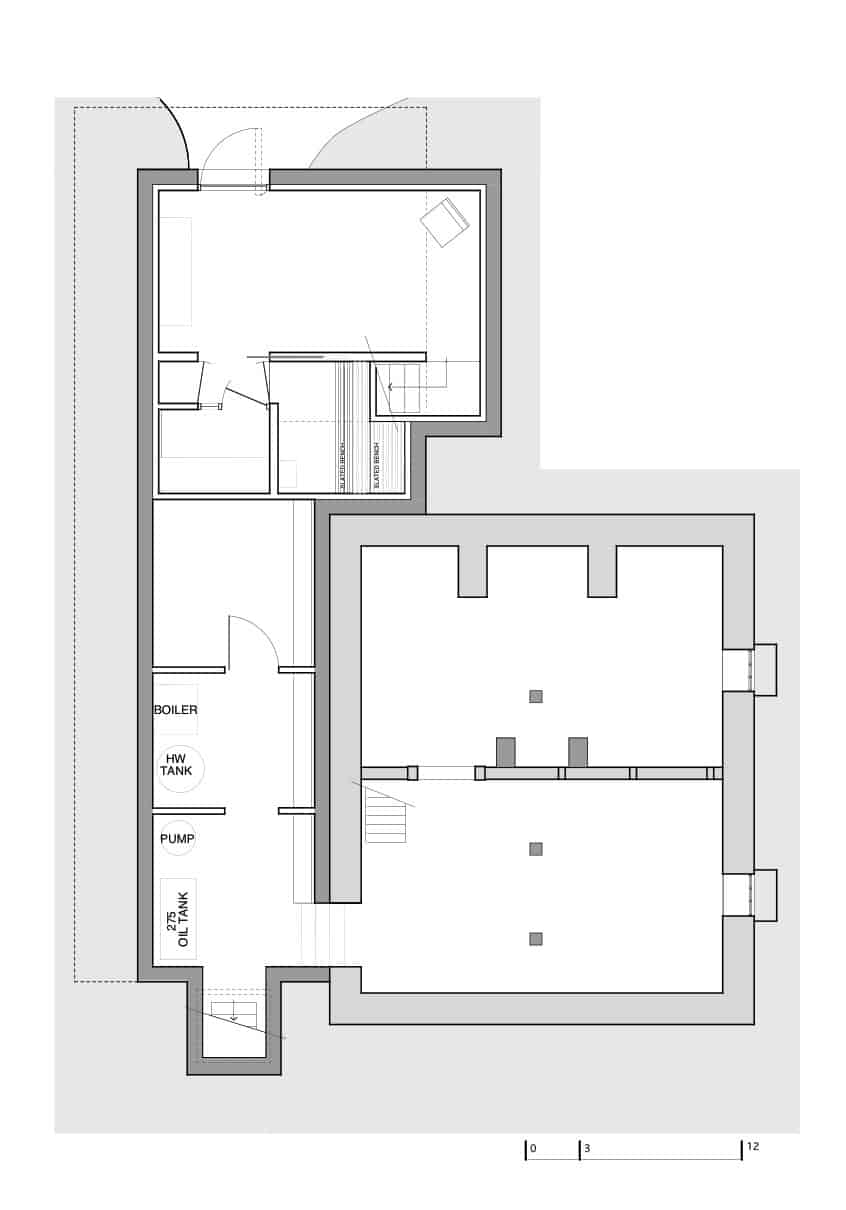 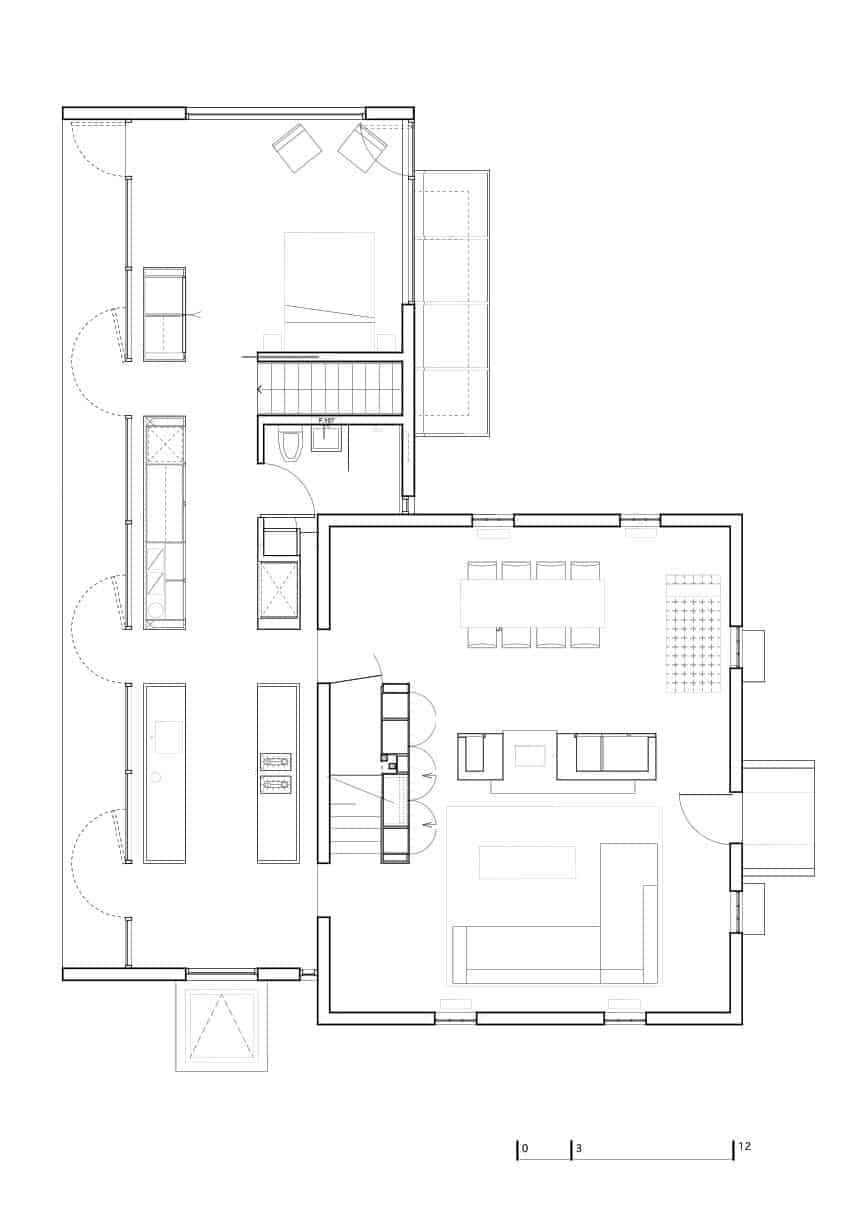 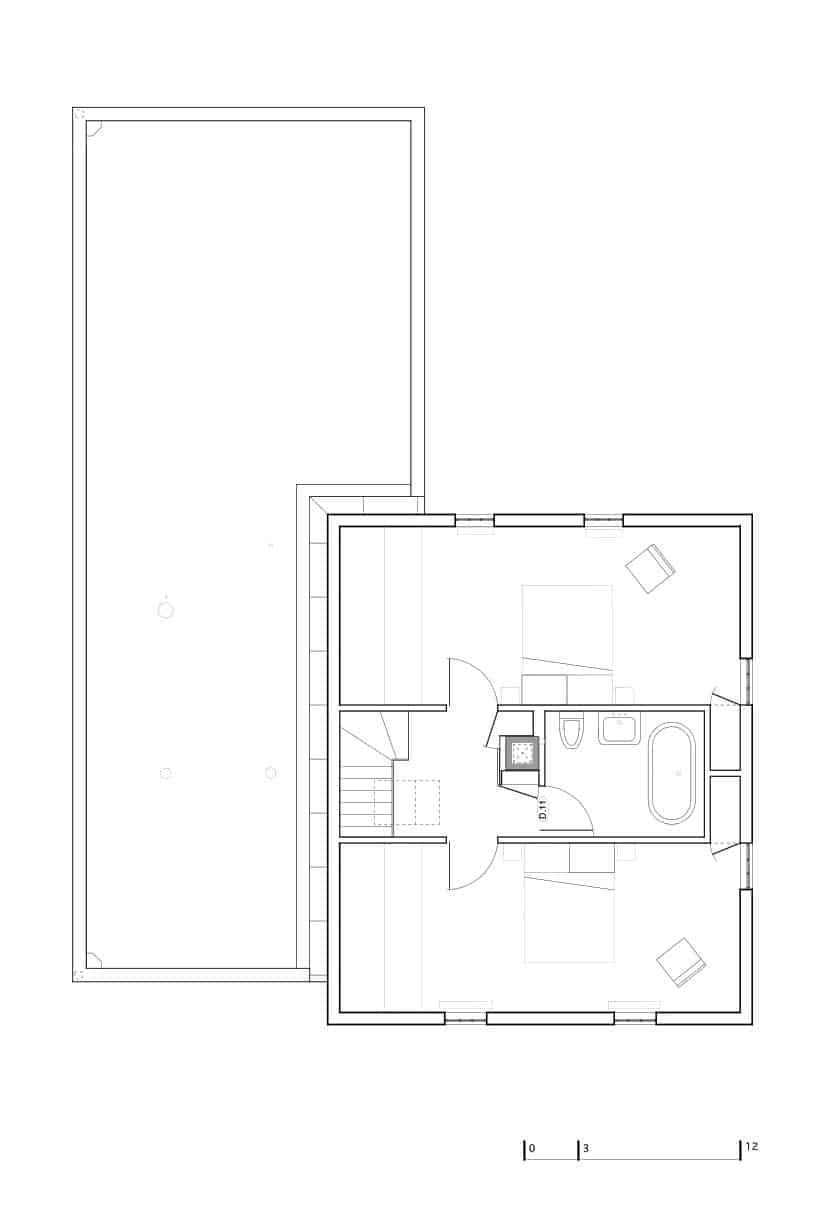 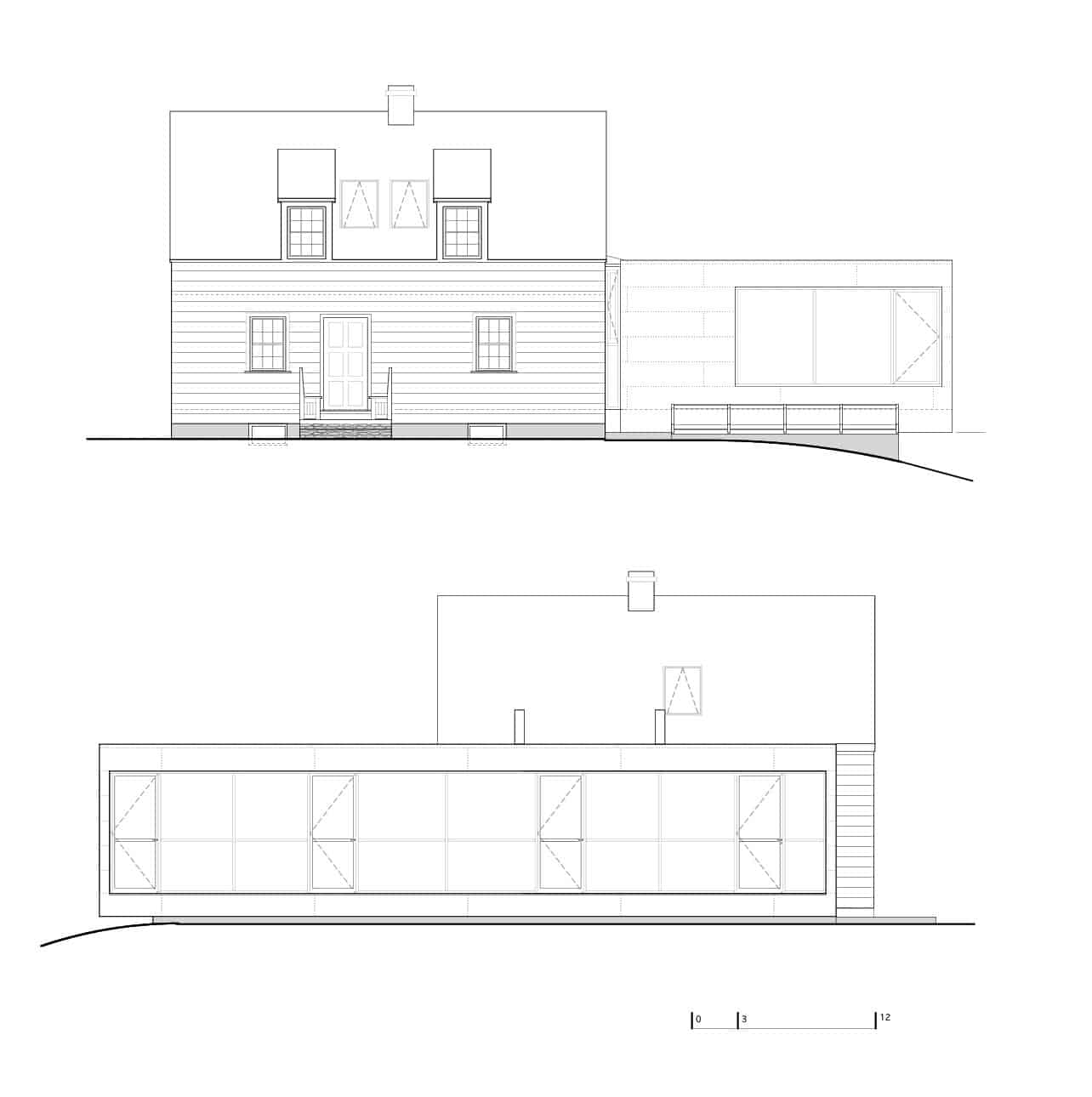 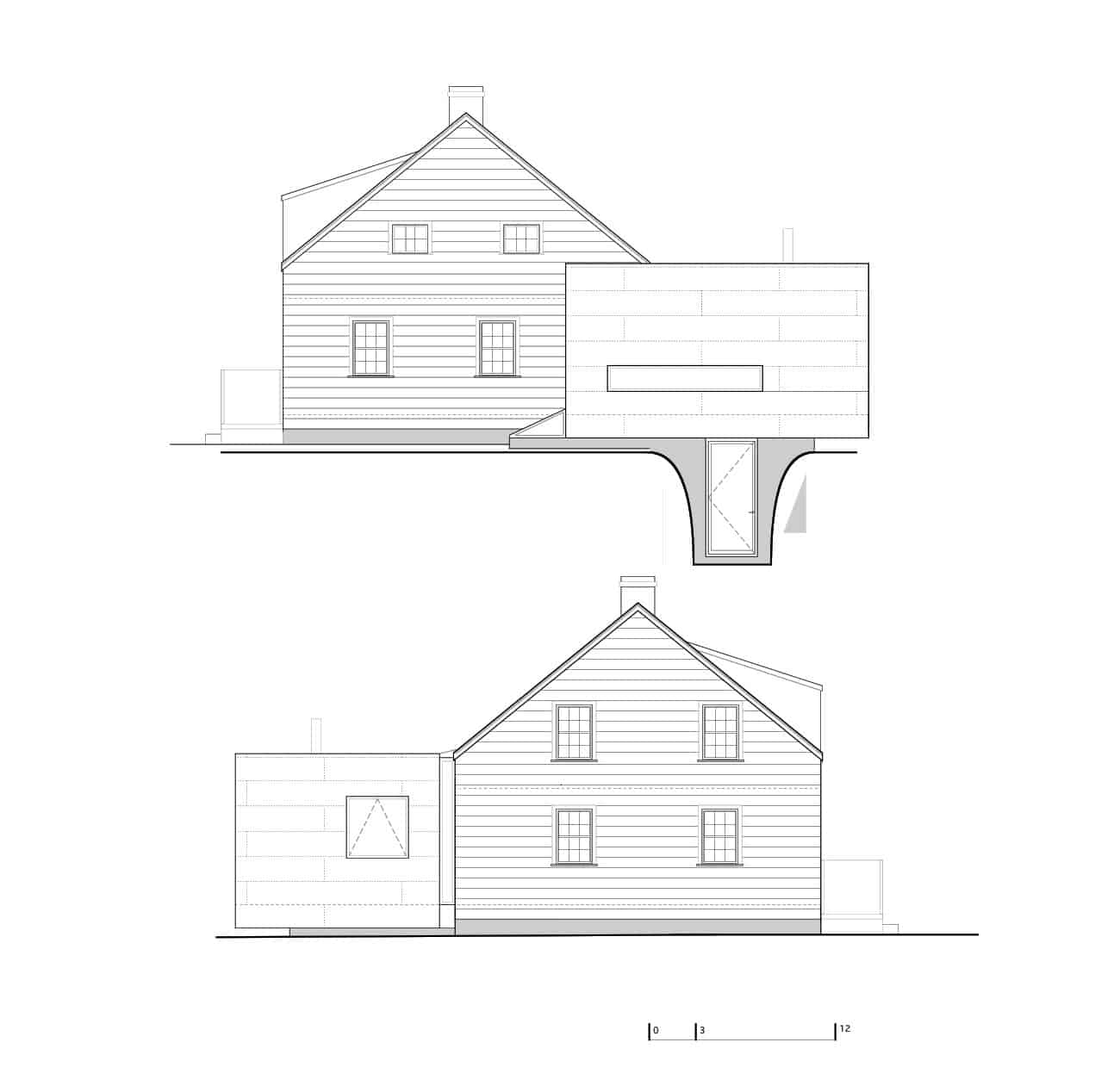 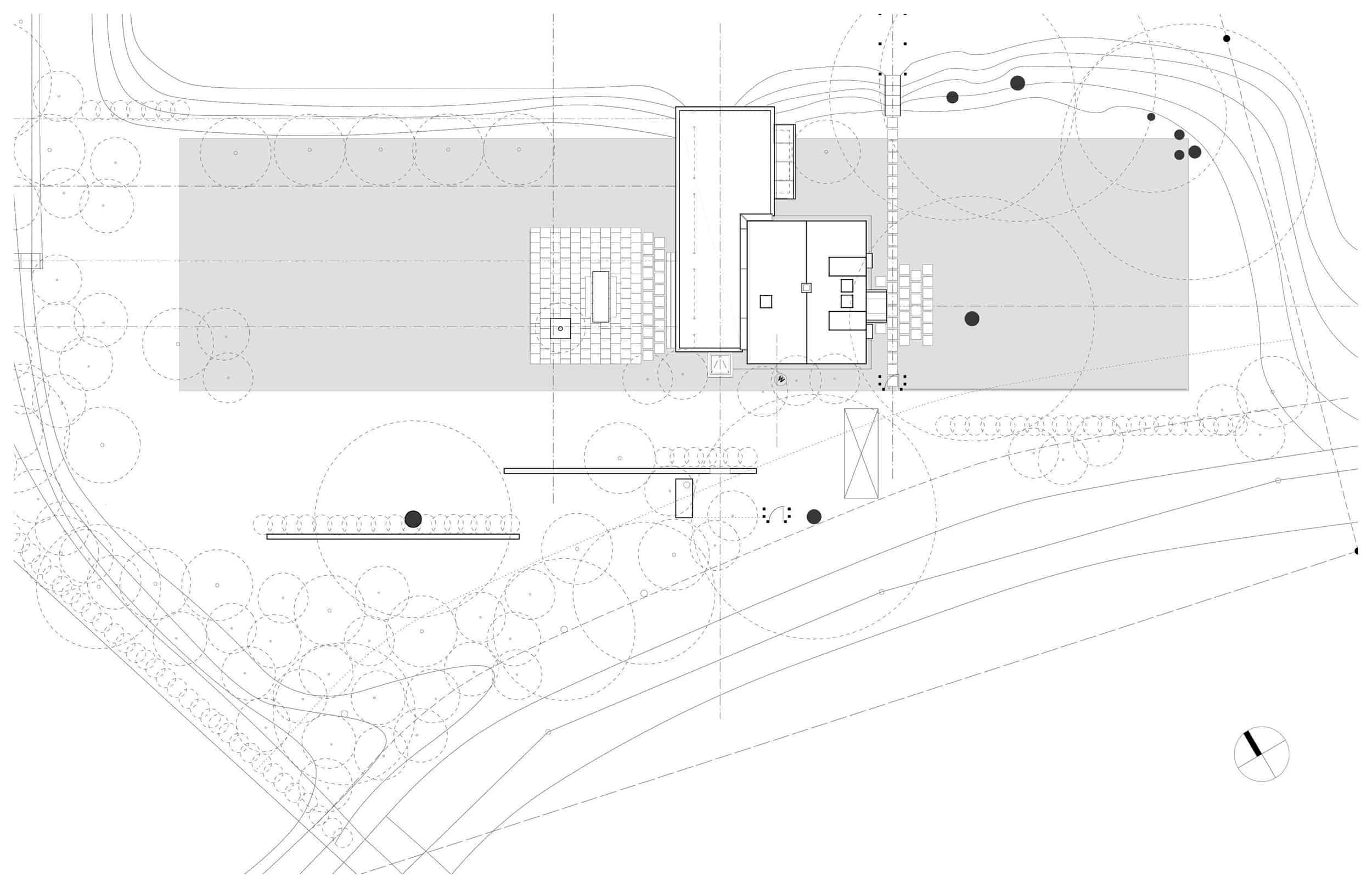 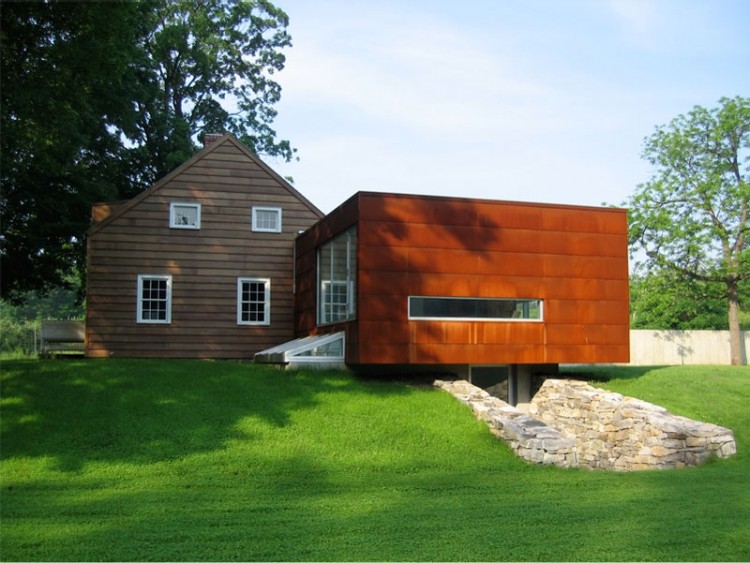 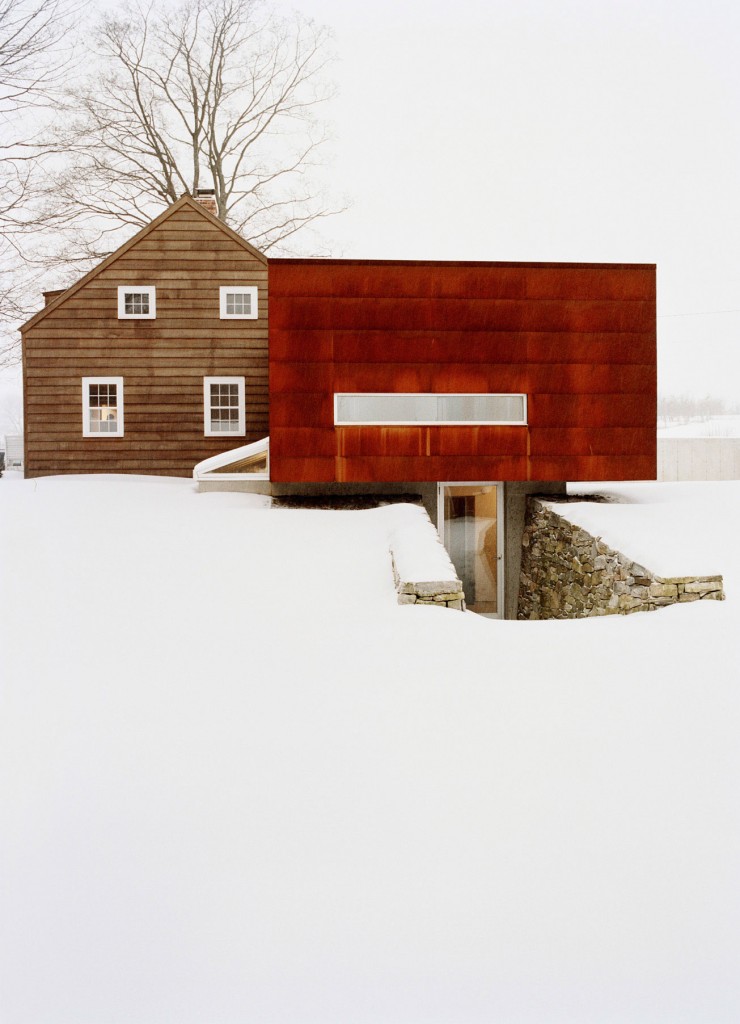 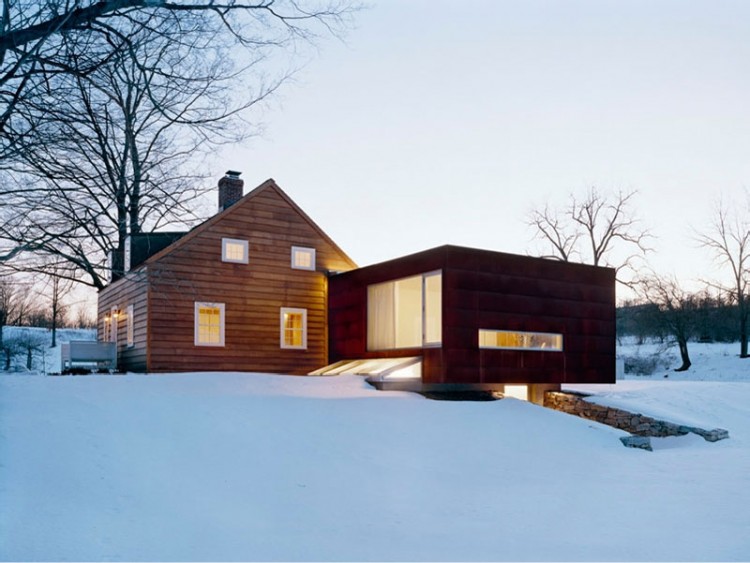 “The project started with the purchase of a much-neglected Eighteen Century homestead in an apple orchard located in Columbia county, NY. The earliest record date for the house is 1734, however, many years of use and renovation have made the actual date unclear. Fabricated in huge hard hewn timbers the basic frame and form of the house conforms to the bentframe consistent with Dutch settlers of that time. This, some wide board flooring and a miraculously preserved wattle and doub wall in  the field stone basement are about all that remained of the original house.

The brief was to develop a modern house within the existing frame and extend the house to provide additional accommodation. No restrictions were placed on the design except to respect the form of the original Dutch house. The Spartan living conditions of the early setters and the simple clean lines of their architecture were inspiration to formulate a minimal design solution.

The design for he house developed organically; stripping back various additions and removing interior partitions from previous renovations revealed a classic house form, emulating a child perception of a house replete with four windows, a door , and sloped roof with a chimney on top. The architects initial investigations for the addition were to produce a design sympathetic to the traditional style, but then the solutions felt so weak and uncomplimentary to the simplicity of the original form that a new approach was developed.

Trailer homes are a common site in rural Columbia County and while their aesthetic is generally of the lowest order there is something compelling about their simple rectilinear form; this became the conceptual catalyst for the addition.

It was impossible to determine what the original external appearance of the house was, so it was decided to respect its existing fenestration, which was probably initiated in the Nineteenth Century. The oldest surviving six over six sash window was removed and used as a template for the replacement of all the other windows, which together with new wide board cedar siding and roof shingles gave the original cottage on eternal image consistent with its Eighteenth Century origins. The addition rectilinear form is separated from the house by a continuous glass gasket, window are replaced by glass planes and the exterior walls are clad in Car Ten steel, which will rust to a point where they compliment the cedar siding of the house.

The house was planed with two bedrooms and a bathroom upstairs and a living room and dining room downstairs separated by a through wall fireplace. The additions contains the Kitchen, guest bedroom and shower room on the ground floor and an exercise room, sauna and steam room in the cellar. The cellar has a large glass door that looks out over the lawn to the orchard. Internally the house only surviving finish was about a third of its original wide board floor, which were beautiful 1 1/2 inch thick 16-foot long boards of white pine some widths of which exceeded 24 inches. A search around wood salvage yards and investigations of contemporary alternatives produced nothing.

Then out of the blue fourteen hundreds square feet of 18th century wide board flooring appeared at a local antique shop, having been salvaged from a house demolished twenty years ago and then left to gather dust in someone barn. The wood was procured and installed in the house. The floors of the addition by contrast are finished in limestone, which was also used for the hearth of the central fireplace in the house. Other interior finishes were shared throughout the house, plaster, exposed oiled wood, and stainless steels.

The juxtaposition of the classes “house” form with the unapologetically rectilinear form of the addition gives a clear representation of each without confusing the origin of each.”