French studio Christian Pottgiesser architecturespossibles has designed Maison L, a very unique residence for a six-person family, and was kind enough to send us some photos of the project.

Located half an hour’s drive west of Paris, the 9,360 square-foot residence sits on a roughly 54,000 square foot plot of old trees. 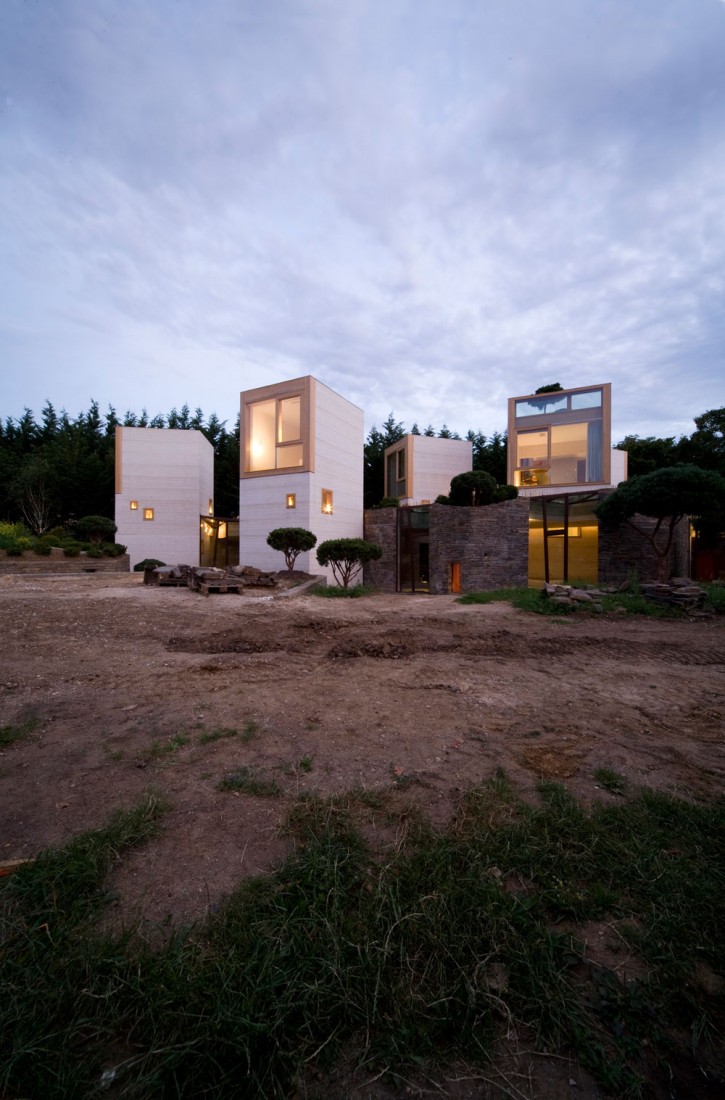 “Less than half an hour’s drive west from Paris city center is located the site of roughly 5000 m2. The rather flat ground slightly tilts to the north, just before the general topography drops abruptly to the river Seine. A gain of only a few meters of altitude would be sufficient to permit an ample view of the Parisian outskirts. The whole original setup resembles more a clearing in a forest.

The surrounding vegetation, mainly consisting of old trees, does not allow a view beyond the dense periphery. In the northern part of the plot one finds today an orangery of the late 18th Century, inhabited by a six person family. 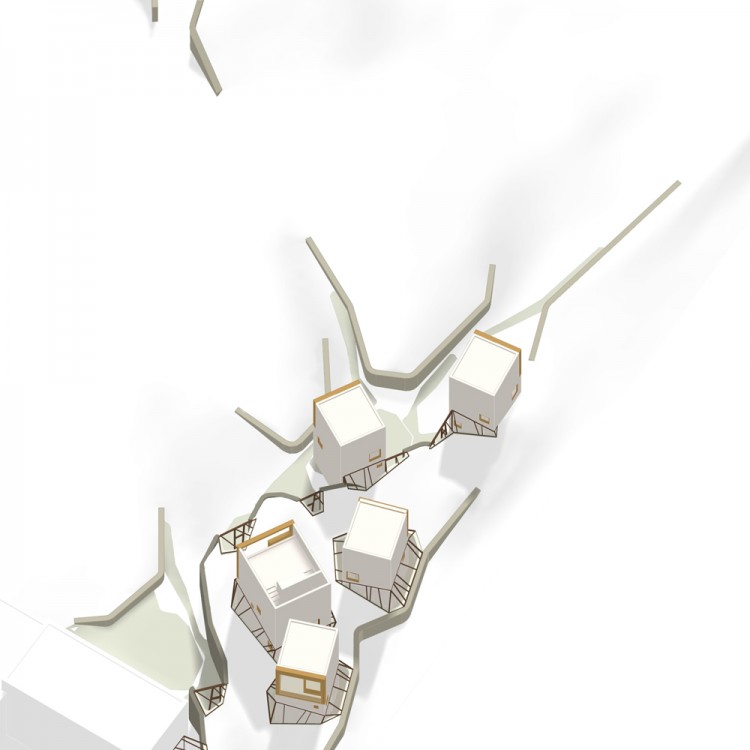 This building was intended to be enlarged by outsourcing the private areas of the family members into an extension, while reception, office and service areas remain in the former building. The spacious grounds had to be left untouched as far as possible, thus, only the north-western part near the boundary had to be the guideline for the main position of any new construction, which ultimately led to an “L”-shaped general plan.

The provisionally installed internals in the existing building of the nineteenseventies, meant for optimizing the use of square meters, will be dismantled. By this, the former seven-meter high ceilings of the original orangery volume becomes apparent again. Local specific site requirements allow only one single building with a gabled or hipped roof. Therefore only an annexe type of building is possible. Furthermore the maximum height of a construction is restricted to eight meters.
View in gallery 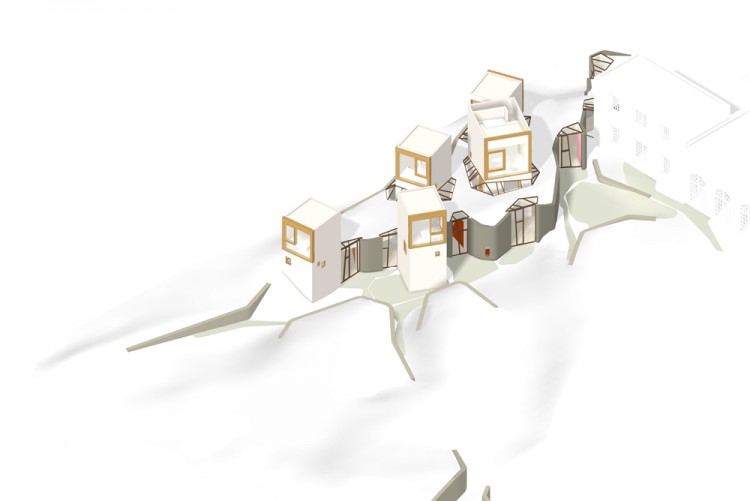 Without a specific geometry the roughly 50m long ground floor of the extension opens up from the north-western side of the orangery. Due to the stringent height limitations, the ground floor remains up to two meters below the original ground level. The whole flank of the building towards the boundary of the plot is covered with soil which is continued on top of the 7% inclined roof. On the opposite side, along the south-eastern facade emerges a complex topography between the house and its landscape. Carved towards every entrance in the glazing the river-bed-shaped, undulating terrain distorts to ensure an efficient access and exit.

The private sector, shared by the six inhabitants – four children and two parents – is fragmented into four different elements. Each commands a certain part of the ground floor which gradually develops into a more and more private zone, without doors, communicating with the other family members.
View in gallery 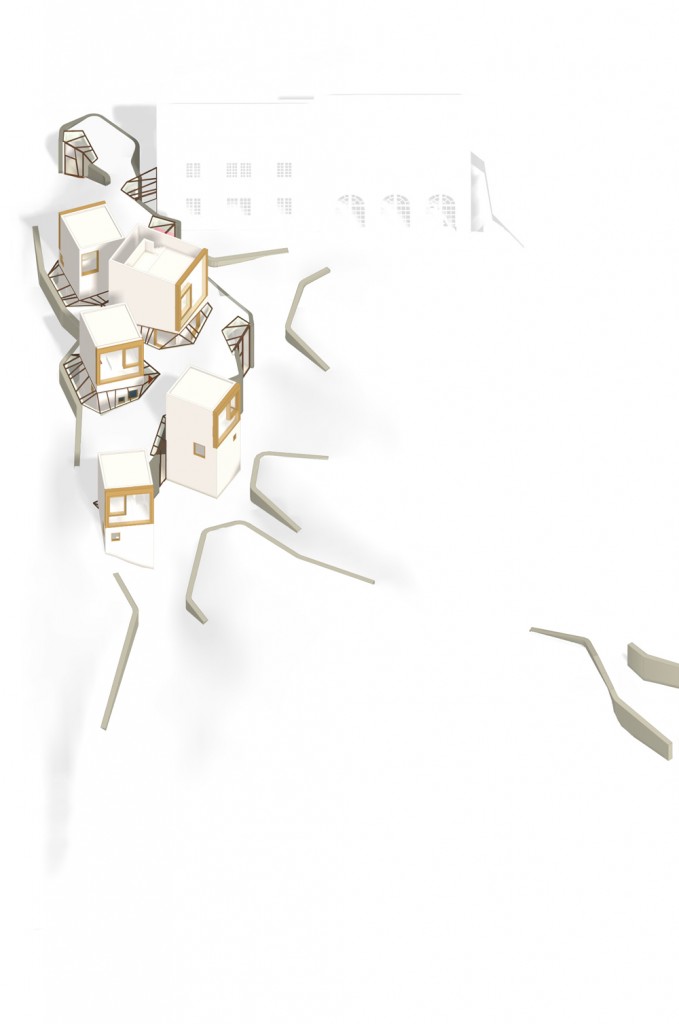 The local building code allows however, in exceptional cases flat roofs, as long as they do not exceed 25m2 each. Thus five three-storied tower-like volumes were implemented, stamping through the garden roof. Glazings around each “tower” provide natural lighting and an intriguing succession of perspectives between above and below, inside and outside. In each private tower are located at the ground level, a dressing room and storage space, the mezzanine, a bathroom and, finally, in the second floor, a bedroom. The slightly bigger tower for the parents has a rooftop garden from where one has a clear view to “La Défense”, the business district of the modern Paris with its sky scrapers.
View in gallery

Convent Conversion in North of Paris

Eitan Hammer Carries Out a Row Home Renovation in Paris

One Comment to Maison L, an Amazing Concrete House near Paris by Christian Pottgiesser