Loft in El Campello by COR

This 624 square foot one bedroom apartment was fully renovated by Spanish architectural firm COR to accommodate the needs of a young couple.

Situated in Campello near Alicante, Spain, the apartment is located in a building of small dwellings for seasonal use that was built in 2007, only a few step away from the beach.

One cool new feature is the movable glass panels of the terrace that can slide along the walls, transforming the entire apartment into an area open to the sea! 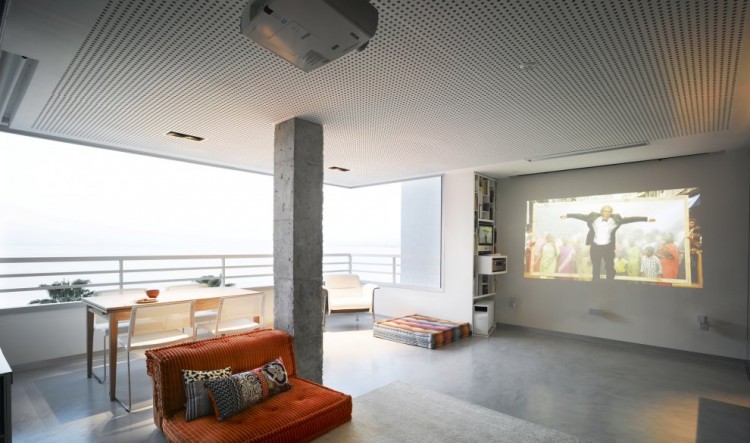 Loft in El Campello by COR:

“This is a housing project for a young couple about 50 meters from the sea in the Rincón de la Zofran, with a full view of the beach of San Juan de Alicante.

The beach of San Juan-Muchavista has become urban and cosmopolitan part of the metropolitan area of Alicante, where a large number of population has moved to live. This has been particularly important contribution in the implementation of the urban tramway network (TRAM).

A daily walk in intense sequences of work, leisure and rest from the bustle of the picturesque Old Town, to the whimsy of the beach and public urban space.

The previous distribution of housing corresponds to a second home in a typical building of small dwellings for seasonal use by the sea, built in 1987.

The houses are barely inside the 50 m² + 8 m² terrace. The boom of this type of construction clogs the Alicante coastline in the 90s and early this century.

The experiential atmosphere control is the big problem with this space. The use of the house is going to be torrential and rapid, almost as a base camp where shelter from the contemporary dynamics, in which their owners are constantly socio-cultural exchange with the world to prepare themselves to live and make their worlds.

The terrace like finding typological. Given the weather conditions in the area, we understand that the intelligent use of the property passes to deepen the concept of terrace, through the trim and movable floor heating-cooling air conditioning, transforming the entire house in an area open to the sea.

The “islands” and “polls.” The islands of zoning is given by the inclusion of the program and the adequacy of the general facilities of the building, allowing space to build a “fluid” where the route almost intuitive response to the use of the dwelling. Polls: objects make up our experiential memory. Clothes, books, food … take on special importance as they create the landscape of the home.

A continuous space for a family of housing dos. The end result leads to the continuous space by a complete formal simplicity and nuanced performance material, which promotes freedom of meetings, within a small, but nevertheless, reduced interior landscape.”

Apartment by the Beach by ZZ Architects

A Renovated Loft in Bucharest by TECON

Loft in Bratislava by Atelier SAD