This 4,600 square-foot single family residence was built for an art collector. 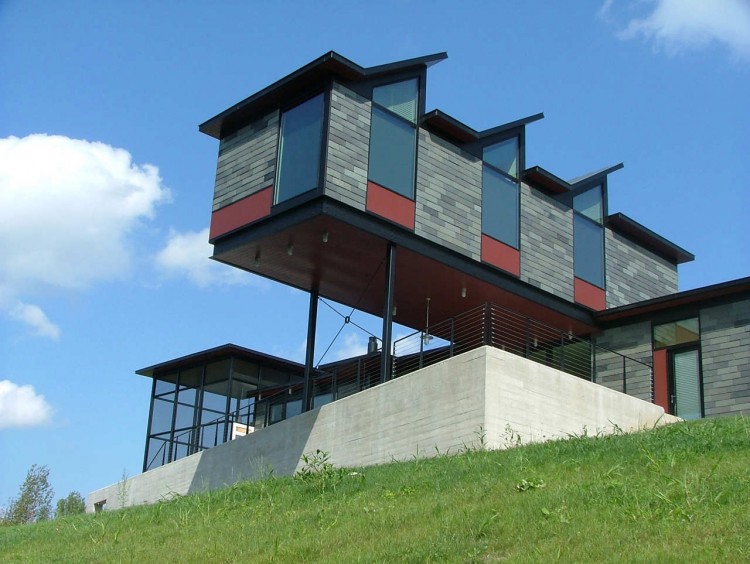 “This is a house built around an art collection. The need to maximize wall space while still having large windows led to our design solution: A rectangular box with windows to the view contains the major living spaces. This is broken in several places with cubes containing studies, the front entry, and the screened porch. These cubes push into the interior, providing walls for paintings, small “accidental” gallery spaces, as well as the separation necessary between private and public spaces.

A second bar contains the service spaces of the house, while a third, which flies out over the terrace, contains the guest suite and creates a covered “porch” below.

A favorite Breuer house inspired the stone wall penetrating the house and the view-framing openings in the concrete walls. We composed the exterior walls of the house entirely as rectangles, in three different colors and textures: the windows, red painted panels, and slate roofing tiles (mounted sideways).

The house has triple glazed windows, super insulated walls and ceilings, and geothermal heating and cooling. It received the Energy Star program’s highest rating. We located the building close to the eastern border of the property in order not to spoil the beautiful meadow that slopes down to Lenox Mountain Road. In addition, the house is largely dark gray on the exterior so that when seen from a distance it will blend in with its surroundings.”

The FLOAT House by Make it Right and Morphosis Architects

House by the Pond by Stelle Lomont Rouhani Architects