Located in Herzliya Pituah, a rich neighborhood on the western side of Herzliya, Israel, the 6,458 square-foot contemporary house was designed as a vacation home for a family living abroad. 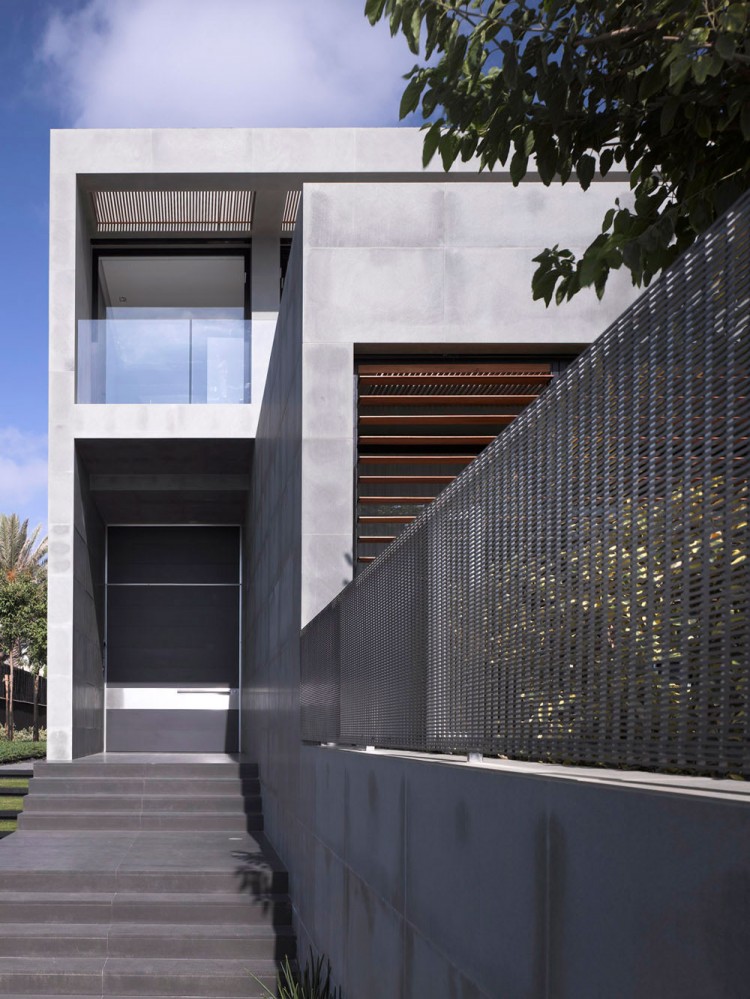 “A modern and minimalistic building that completely eliminates the accepted barrier between the inside and the outside and hides, within its restrained spaces, a dramatic atmosphere and wide open spaces.

The house was built as a vacation home for a family living abroad. It is situated directly on the coast in the center of the country. The buildings architectural design is based on three central masses that surround a large internal courtyard with a swimming pool at its center. The masses comprise the border and the barrier between the street, the neighbors and the home’s interior and between the internal courtyard and those same spaces. The central theme was to create dynamic walls that allow, on the one hand, the elimination of the boundary between the central courtyard and the internal spaces, and on the other hand, the creation of a changing and dynamic facade that allows for the total closure of the façade or different levels of exposure or concealment.

The central mass is bounded on the side facing the pool, by a seven meter long aluminum display with no supporting columns. Half of the display is divided into six large continuous units that are embedded in wall niche and are, in effect, concealed units. The encompassing mass becomes a floating one and the boundary between the kitchen and the long bar that extends along its entire length and between the pool and the surrounding deck is cancelled out in its entirety and so creates an open home with no boundaries. A space where the border between the inside and the outside becomes blurred and, in effect, creates a new space that is a cross between an internal and external space.
View in gallery 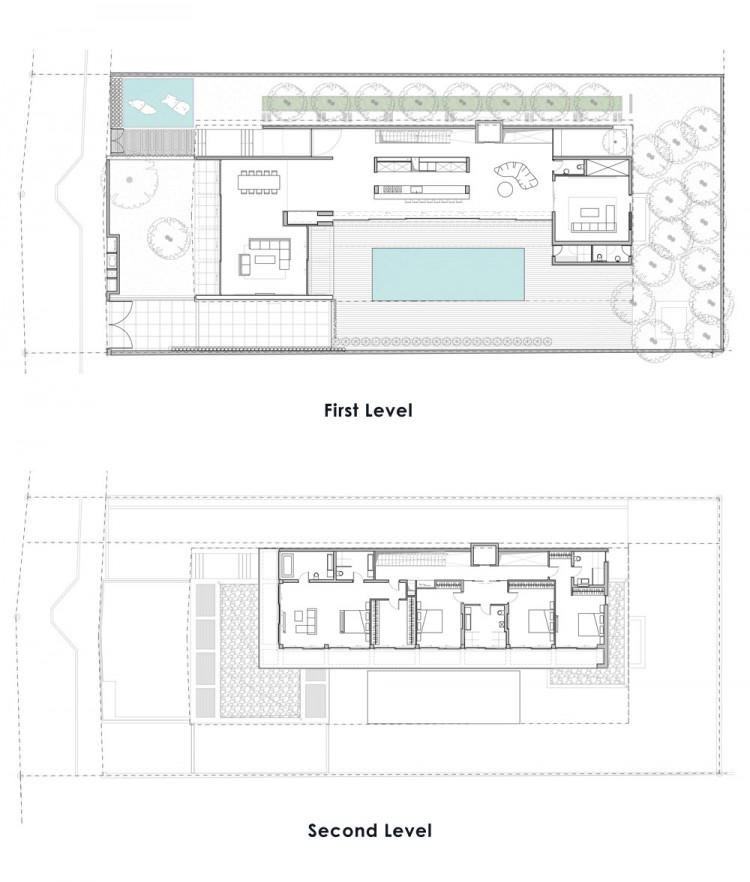 The side the sea to the west, allows for a richer relationship between the exposed and the concealed. A partition created from six equal metal sections and adjustable wooden slats allows for the total closure of the façade or different levels of blurring between the inside and the outside. The dynamism of the large accordion doors and the adjustable wooden slats allows natural light that enters through them, to play a central role in the homes internal spaces and for the creation of geometrical displays of light against the vertical and horizontal areas and so enrich the material restraint in which the homes spaces are fashioned.

The architectural idea comes to the forefront in a concrete fashion when all the buildings facades are opened and disappear. The structure, which looks like a solid and sealed structure, suddenly appears to be floating and produces a feeling of lightness and visibility. The house appears as if it were built from floating surfaces, with long moving pictures that divide and move between them.

The central motives that usually accompany the architect: reliance on fewer shapes, a reduction in materials and restrained colors are manifested in this project. But, what makes this project special is that, in order to strengthen the dynamics and the tension between the faultless and restrained masses and between the feeling of lightness and openness when all the walls are opened, two central materials are used that are the opposites of each other: solid, strong and restrained materials such as grey limestone and black basalt as opposed to clear and opaque glass and other reflective and reflecting materials such as water in a black reflective pool. The dialogue and the relationship between the materials and the meditative qualities, create, within the restrained building’s spaces, a unique and surprisingly dramatic atmosphere.”