French designer Frédéric Flanquart has designed the interior of this 861 square-foot loft.

Located in Paris, France, the apartment is situated on the top floor of a building that was heavily damaged by a fire. 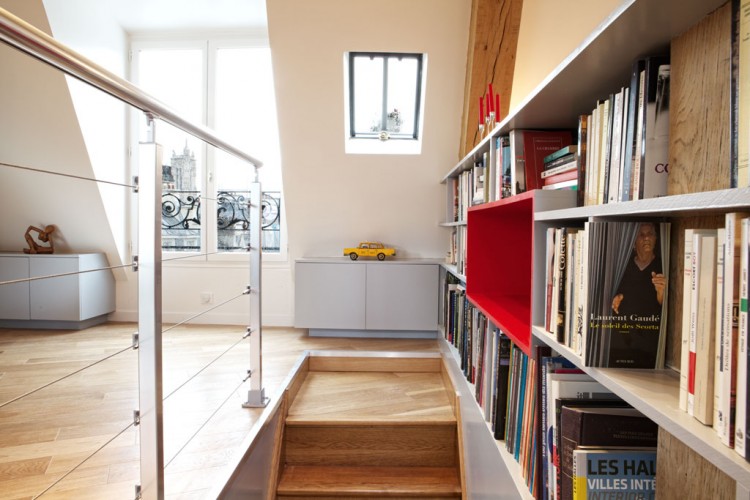 “It all started on a September night in 2009, when we all settled up there, on the roof, or at least what remained of it.

The building had been through a major fire a year before. The scene was set. The outlook of this area turned really fast into a crazy challenge: design and achieve a shell-free space with – as reference marks- only half-burned out staircases -leading to the lower level-, a huge scaffolding structure used as a roof, and a 360° view over Paris.

The client wanted something new, ambitious and creative, in order to turn over a new leaf after 10 years spent at the loft. Both concerned about the quality of implementation and about the layout and fitting details, he enabled us to make a true fulfilling experience out of this project. Not a single inch was missed out, the goal was to conceive an open and welcoming space with as much stowage as possible, while allowing a comfortable circulation. We came up pretty quickly with the idea of a quiet and relaxing place during the day switching to a genuine place of mystery and pleasure at night.

The dream came true 18 months later, on December 31st, and the leaf naturally turned over. A space where the filtered, aimed, tamed light designs the volume. Straight or slanting, geometrically random at times, the work of lines highlights every detail. The loft, a filled with emotions project, combining complexity, simplicity and lightness.”

The Yacht by Frédéric Flanquart

Convent Conversion in North of Paris

Scandinavian Design: A Relaxing Space Under The Roof