Designed by Rotterdam-based studio Ooze, the Rotterdam Villa 2 project is a complete renovation of an existing detached house built a few decades ago and extended several times since then.

Located in Rotterdam in The Netherlands, the now 4,300 square foot residence has six bedrooms and five and a half bathrooms. 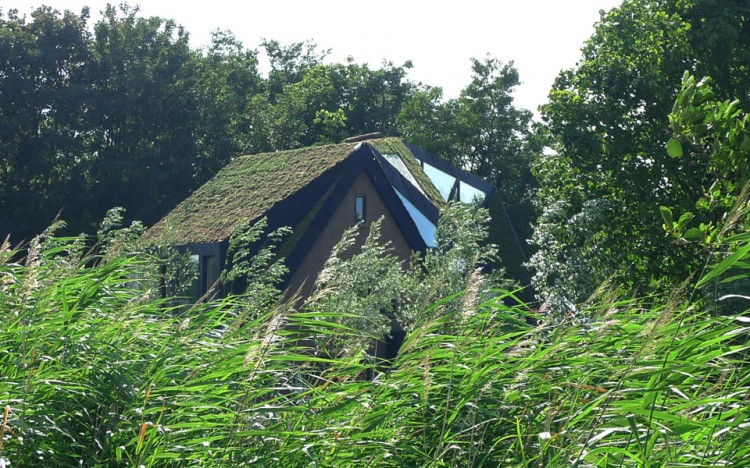 “This detached Rotterdam house had been extended several times in recent decades. Ooze architects translated the owners? desire to recycle the ‘soul’ of the house by transforming it in an unusual way. The young architectural firm began with a commission to design a kitchen that then evolved into a complete renovation. The design was based on the maximum building envelope: ridge height, as well as the depth of the extension was defined by the zoning plan. “We simply connected these points” says Eva Pfannes, the architect who designed the transformed house along with her studio partner, Sylvain Hartenberg.

The house on which Ooze began to work had gradually grown over the years. It now consisted of two perpendicular building volumes with a pitched roof, a lower semicircle building in between connecting the two parts, and several extensions on the other side in the angle of the hook-shaped house. The owners wanted to reform these incoherent parts into a logical and comprehensive whole. The pre-defined maximum envelope formed the guideline for a new skin that wraps around the old house and shapes new spaces for inhabitation. 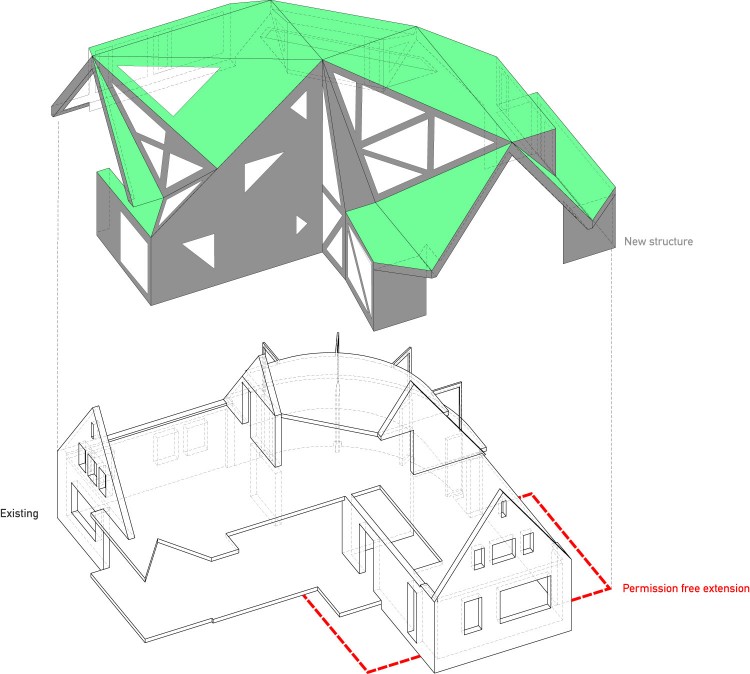 The new kitchen and a brief to increase the number of bedrooms were the launch for the redesign of the entire house of which the staircases form the backbone. The layout has been totally reorganized around a central void. A new staircase on the north wall is servicing first and second floor. Inside, the building manifests itself through a formal language based on prefabricated, solid wood triangles that have a direct reference to the old roof. Folds and facets were generated by an intuitive rationalism following what was permitted and what would benefit the space inside. This skin becomes the structure which sits like a hat on top of the existing one and works as a load carrier to bring down the additional weight burden of the new floors and roofs. The only construction method able to provide the precision and speed of delivery requested by the client was prefabricated solid timber panel (Lenotec) for the structure of the skin (roof, walls and floor).

The prefabricated, solid wood – LENOTEC – elements were cut and arrived as a 3D kit on the building site. This internal structure communicates a sense of the new and the old: living in a new structure as well as with the old walls. The transition between the two is subtle and gradual – as you go up in the house, the new gradually supercedes the old. The spaces generated for inhabitation become very different and very specific, enriching the life within in the house. The material also allowed the outer walls and roof to remain relatively thin. Within the given building envelope a maximum interior space could be realized. By varying the thickness of the single material, it could serve as outer wall, roof, interior wall, stair balustrade and stringer. The result is a succession of spaces where the difference between ceiling, wall and floor are gone and thus overlap. The intervention that started the process of transformation remains the most important. Through the creation of a void, the architects transformed the dark and cramped existing stairwell into a bright and social space.

The exterior references traditional Dutch farms through the use of sedum green roofs and black stained ACCOYA* planks in a standard width of 15cm. The lines of the cladding wrap around the house like a continuous new skin. Beyond style or architectural aesthetic, the aim was to engage in a process of rediscovery of the vernacular, to introduce a dialogue between the old and preserved and the new, and to explore a new language which reinterprets the old. It is not an object, it is a collection of very comfortable spaces which are intertwined with the landscape, an extended envelope which extends the possibilities of inhabitation. We are convinced that reclaiming the past is a form a rediscovery of a different future, away from the tabula rasa, a more sustainable and inspiring way of enriching the environment we live in.

“The house is a precedent in establishing a new culture of dealing with an existing structure. “Recycling” is another nature of work; therefore it is not a formalistic but a conceptual house. The new and old come together, in fact they are melted together. The old does not disappear, it is enhanced, and all shapes of the original are still there. The new reacts to it and explodes the space, and creates an interesting expression. Everything has its value and all shapes have a reason. An openness in both parties, architect and client, was necessary to make the project more special and more stunning. We went together through an incredible process and the project is the result of this. Both the recycling of the structure and the process can be seen as a sign of the times that will make it into a landmark.”

Transformation of a Barge into a Home by BBVH Architects Rotterdam