After a fire consumed their house on Fishers Island, New York, the owners asked Tom Phifer and Partners to design a glass house a long narrow glass and steel house that would take in views of both water and gardens.

The ceiling is only eleven feet high, the exact height of the pruned apple trees that border the front door on the south side of the house.

The new house is not only transparent to the gardens, water and sky. It is a glass pavilion devoted to art. 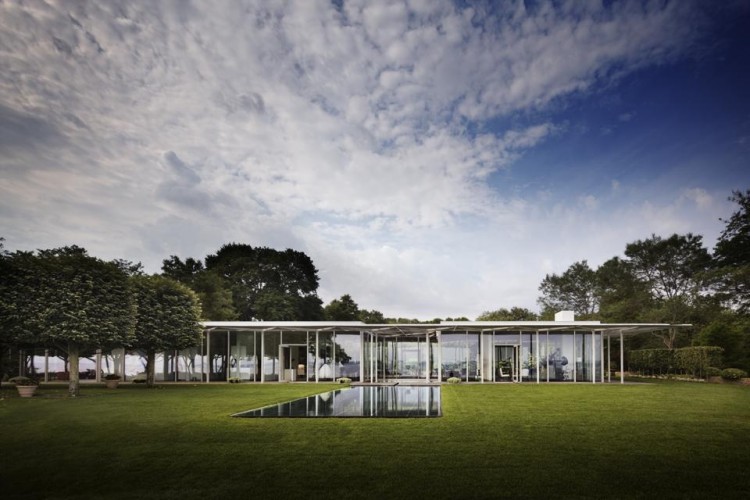 “Meandering gardens and woods, sparked with daffodils, peonies and daylilies, flank the straight drive in. Up ahead near the path’s end is an aperture framed by an arbor of apple trees, capturing an elemental view of sky and water: the horizon of the Long Island Sound. As you reach closer range, you suddenly realize you have been looking not merely through foliage, but also right through the house.

Just behind the copse stands a delicately transparent pavilion. Its light-filtering trellis—a horizontal tracery of slender aluminum rods extending the roof plane—aligns with the canopy of trees before it. Woven into the landscape, this is an architecture of subtlety, a precisely grounded yet quasi-weightless structure, an ethereal rectangle, planted between two existing woods. Like feathery fronds, the trellis reaches toward the bordering leafy branches, while the pavilion’s interior floor plane—fully visible through the glassy, Miesian shell—continues outward, its surface of ebonized bamboo transformed into an exterior plinth of Indian black granite, a walkway, finely striated with shadows from the diaphanous, metal canopy above.

Meanwhile, the entry axis penetrates the pavilion’s simple 4,600-square-foot volume, notching into its far side and emerging as a long, miraculously shallow reflecting pool, incising the lawn with a silvery film, its distant edge dissolving optically into the Sound.

A perimeter path lines the structure’s transparent shell. Freestanding in parallel alignment, the interior walls never meet the enclosure. Instead, they form a virtual box within a box, an implied inner volume. These parallel planes channel long vistas out toward water and garden, only allowing the seascape’s wide, rugged panorama to emerge in full view at the house’s far side.

More than a one-bedroom retreat for a former museum director and his wife, this is also a place of extraordinary 20th century paintings, sculptures, and glassware—much of it conveying a sense of buoyancy or levitation that echoes the pavilion’s lightness. The artwork always figures into view out, even if only peripherally. Conversely, from the gardens, this colorful indoor collection projects a presence outdoors.

In the animated interplay between landscape and art, in the shifting ambiguities between inside and out, the design achieves exceptional balance. An arcing swath of vibrant yellow sedum in the garden resonates with the golden footbridge in a Chinese screen inside; a mossy rock garden projects into the pavilion’s simple volume, while the bedroom nestles into a private apse of garden vegetation. You can look straight through the house without realizing it, but you could also mistake reflections of trees for glimpses through the pavilion. Morphing with the skies, flourishing seasonally, the dialogue evolves, nourishing the owner’s desire to live in the garden—with art.”