Circle Stone Ranch is a rustic southwestern style retreat crafted out of native rocks and boulders and completely “off the grid”.

Nestled amid the peaks of the Mule Mountains in Bisbee, Arizona just 82 miles southeast of Tucson, Arizona, the Circle Stone Ranch construction started in 2002 and was completed in 2006.

The three bedroom, three bathroom home is situated near the base of Mount Ballard, the highest mountain in the Mule Range at 7,370 feet elevation which helps to establish the average year round temperature of 72 degrees.

Currently offered at $2 million, this unique property sits on 62 beautiful acres of land with an additional 80 acres of shared surface and mineral rights to ensure complete privacy.

“On Labor Day weekend in 2002, my mother, Karen Snyder and her partner, Sheryl Records, began their four year long journey to build the Circle Stone Ranch.  Of course anyone would know this was a monumental undertaking but they had no idea what the next four years of weekends, holidays and “vacation” time off work had in store for them.
They owned 60 acres of land with a beautiful spot for the house right near the top of Mount Ballard just fifteen minutes up the road from Bisbee, Arizona.  Karen had just sold her house in nearby St. David which became the green light for starting on a new project.  They wanted to build a ranch style home that would be completely off the grid and that would be virtually indestructible in case of any disasters.  Karen came up with the layout and design of the house and drew it up herself on big sheets of drawing paper.

They knew they would primarily use rocks for the construction of the ranch since there were two different sites on their property that they called their “rock quarries.”  In reality, they were large areas where thousands of rocks of all shapes and sizes had accumulated over hundreds of years.  They really hit the jackpot with those quarries and didn’t have to spend a single penny on any of the rocks used for the construction of the house.  Sheryl would drive a back hoe to the quarry while Karen followed with a flatbed pickup truck.  At first, they were only interested in the smaller rocks to be used for the inside walls but any time they came across a massive stone they began to envision its placement along the outer walls of the house.  So, day after day, they would load the rocks from the quarry onto the flatbed and then off the flatbed into the sorting area at the construction site.  Once they had a good amount of rocks to start the project, they ordered their first few tons of sand and mortar and got to work.

They began by mixing the mortar in a small electric mixer, placing the rocks one at a time, and then using the mortar to hold them together.  The larger rocks on the bottom of the walls were placed using the back hoe but the smaller rocks near the top could be placed by hand.  Typically, a house is started by building the outside frame and then working your way in with inside wall framing, then drywall, floors, etc…But, since the back hoe was necessary to place the larger rocks, the house had to be built from the inside out.  The first wall they completed is called the center circle because it is a circular wall at the center of the house where all of the roof supports come together like a wagon wheel.  All of the inside walls in the house are about 8 feet tall but don’t extend to the ceiling to allow for proper ventilation.   All of the electrical and plumbing lines had to be put in as they went and they would rock and mortar around the vertical conduit.  They also did all of the door and window bucks as they went because these had to be mortared into the rock frame as well.  It was day after day of mixing mortar, finding and placing the rocks like pieces of a giant puzzle and then mortaring them into place.
They began to improve and streamline the process as they went and soon, Karen and Sheryl were rocking and rolling.

The construction of the Circle Stone house was well under way as wall after wall went up and the house started to take shape. After all of the interior walls were finished it was time to start on the exterior ones. This would be a considerably more difficult task because the rocks needed for these walls were much larger. In fact, the rocks on the bottom row of the exterior wall average over 2 tons each and even the smaller ones are over 500 pounds.
View in gallery 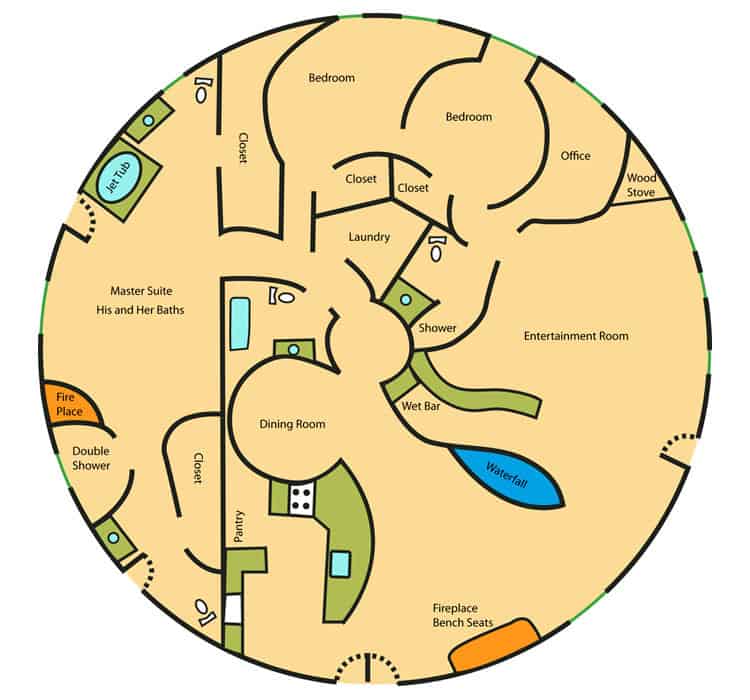 In order to build the exterior wall, Sheryl would use a chain on the back hoe and attach it around one of the colossal boulders. She would then drive the boulder over to Karen on site who would guide it into place. Once it was placed on the wall they would remove the chain, mortar it into place and start the process over again. After 2 years and 9 months, over 200 tons of sand and mortar and God only knows how many rocks, the skeleton of the house was finally done. The women rented a sandblaster to clean all of the excess sand and mortar from the stones, and then sealed the entire house with a special waterproofing product.

The next step would be to place the roof supports and for the first time since they began construction, the professionals were called in. The roof is supported by seventeen, thirty four foot wooden vigas set into a wagon wheel pattern. The vigas were set into special U-shaped niches built on top of the walls. After the vigas were in place, they rocked another one and a half feet up all the way around the house to make room for the roof. They were sure to leave three 6” canals that allow for proper drainage of rainwater. These canals each drain into a 1500 gallon storage tank for a total of 4500 gallons of rainwater storage.

The ceiling was made with 2 x 12 rough sawn Douglas fir planks set to follow the circular pattern of the house. Once the ceiling was up all of the upper electrical work could be done. Also, seven skylights were put into the ceiling including a sizable 4 x 4 one placed right over the area where a bed would occupy the master bedroom. Once the ceiling planks and skylights were done the professionals were called in once again. A four inch urethane foam with an R30 insulation was sprayed on top of the ceiling planks and became the roof of the house.

Next, all of the custom interior and exterior doors and the Low E Andersen windows were installed. Sheryl then connected the electrical to the “power plant”-the 24 batteries that stored the energy harnessed by the solar panels and wind generator. With the utilities up and running, the house was nearing completion and the only major thing left was the interior.

It might seem like the job was almost done but it took over one year before the project that began almost three years ago was finally completed.

Near the end of 2005, the construction of the Circle Stone Ranch was in its final stages but it would take a little over one year before the house was ready to be moved into and decorated.  The first thing that had to be addressed was the floors.  A three zone radiant heat system with a dedicated boiler was put down first to circulate heated water through the in floor tubing which heats the entire house.  The boiler is run on propane as are a few of the other appliances in the house and a large propane tank is situated on the property for these purposes.  After the radiant heating system was laid, it was time to focus on the adobe floors.

First, 55 tons of shaker fines were ordered to make the base of the adobe mixture.  A dry mixture of shaker fines, lime and straw was stirred together in a wheelbarrow then brought into the house.  Once in the house, water was added to the mix and the adobe was hand troweled onto the floors.  This was a very long and tedious process as the area of the house is almost 4,500 feet.  After the adobe was laid, it was covered in four coats of linseed oil and then a special adobe sealer.  In the bar area, Karen decided to inlay authentic horse shoes and install a 6 foot Saguaro cactus skeleton to add to the Old West atmosphere of the room.  Most of the house is just plain adobe floors but in some areas there is also tile or even flagstone.  The guest bathroom is covered in flagstone and the master bathroom has an enormous walk in, tile floored double shower.  The shower is over 8 feet by 5 feet with semi enclosed rock walls and a large window offering gorgeous views of the mountainside.

After the floors were completed, the custom built kitchen and bathroom cabinets were installed and then the counter tops were placed.  Some of the counter tops have tiling detail, others are flagstone and one is a custom piece of beautifully finished mesquite.  The main bathroom and master bathroom sinks are hand painted Mexican Talavera pottery sinks and the guest bathroom has a custom hammered copper sink.  Karen shopped all over the country and even into Mexico for the unique fixtures and accessories for the house.  There are two Rumford fireplaces in the house that Karen added her personal touch to by painting one with Calla Lilies and covering the other with geodes.

Finally, in October of 2006 the house was finished.  But was it?  There is always more to do when you build your own house and Karen and Sheryl have since added on 3,800 square feet of outdoor living space by laying a spacious flagstone patio.  Of that, there is 1,100 square feet of covered space.  They have also built a pump house for the well pump, carved a wine cellar out of the mountainside and made a “mini” Circle Stone Studio out of a 100 year old water tank.  Also, it should be mentioned that Karen and Sheryl were well into their 50’s when construction began which makes the Circle Stone Ranch the ultimate representation of girl power.”

Link House by The Ranch Mine

One Comment to Unique Southwestern Style Retreat in Arizona

Scandinavian Design: Home of an Interior Designer in Oslo by Steen & Aiesh