Completed in 2009, the house has been conceived as a relaxing retreat for its owners with an emphasis on entertaining guests. 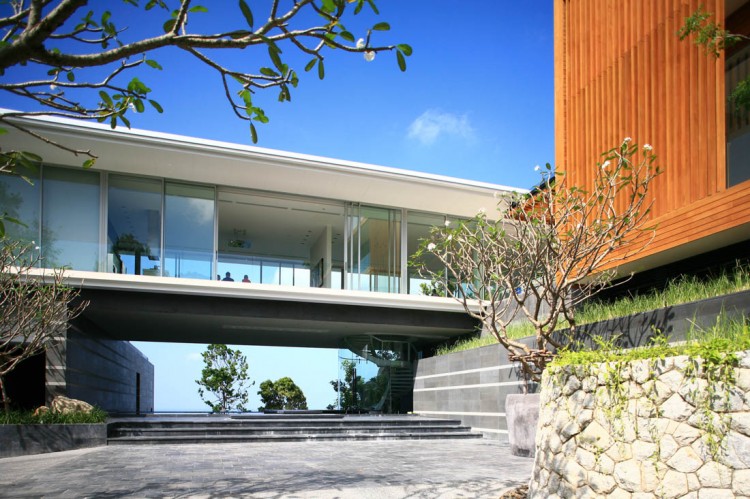 “Whilst dreaming of a singularity of vision, Tierra’s design for a private residence and landscape in Phuket embodies a multiplicity of seeming contradictions and nuances; site, brief, experiences and cultural typologies.

Located on the west coast of Phuket, the site is set within the undulating terrain of the island, remote from the established areas of tourist endeavors and within a secluded private estate. Whilst commanding panoramic views of the Andaman Sea and surrounding hills, the site also belongs to a lush tropical landscape sensitively established by the owner of the development.

The design reflects a combination of containment and expanse and the threshold of the in-between. The four level ‘z’ shaped form of the building is sited in the middle of the site, creating distinct spatial experiences.

The development estate’s granite cobbled terrace walls are extended to weave and form an arrival and podium for the residence. With the building elevated, a forecourt is created by the landscape, guest building and elevated living wing.

The entry reflection pond shadowed by the living span above, forms a threshold between the forecourt and the expanse of the ocean beyond. Limestone clad walls, with their expressive horizontal jointing pay homage to the beauty and clarity of the sea’s horizon. Interpreting the traditional typology of the Thai residences; with separate pavilions but having a unity as a whole, the living wing (connected by a glass enclosed spiral staircase from the pond), is distinct from the complex. The linearity of the volume, the transparency of the glass enclosure, light stone interior and the kitchen islands reinforce this traditional attitude expressed with modern articulation.

The adjacent two level guest wing separated by terrace, is experientially connected to the forecourt landscape and surrounding mountains. Views of the sea are intentionally limited by framing from within its’ teak clad and screen enclosure. Its’ separateness is part of the client’s brief to provide a private house within a house. The interior volumes are generous and well appointed with finely detailed stone floors and walls and fittings.

In contrast, the master wing obscured from the entry approach, firmly occupies the territory of the panorama. Similarly defined as a separate volume, the master bedroom, study and amenities below are expressed as a teak clad upper level on a limestone feature podium. The stone clad wall veils a separate entry for client and visitors and is expressed with a darker palette of timber and stone. Amenities also include separate living, guest amenities and kitchen.

A roof deck accessed by an open spiral metal and teak staircase is revelatory of the site’s position on the coastal headland.

Following the terrain of the site, the pool and social spaces are stepped below, offering privacy from the entry but open to views of the sea. The pool traverses the site and while generous in scale, is distinctly secluded by its connection with the site’s rocky outcrops and landscape.

From this vantage point, the scale of the house becomes readily apparent and its’ cascading landscaped pathways suggest a discovery of the coastal edge beyond.”

The House Cast in Liquid Stone by SPASM Design Architects

Villa Sow in Dakar by SAOTA

Home in Mosonmagyaróvár by TOTH PROJECT