This 3,102 square foot two-story contemporary residence is located in Guadalajara, Mexico, and was completed in 2003. 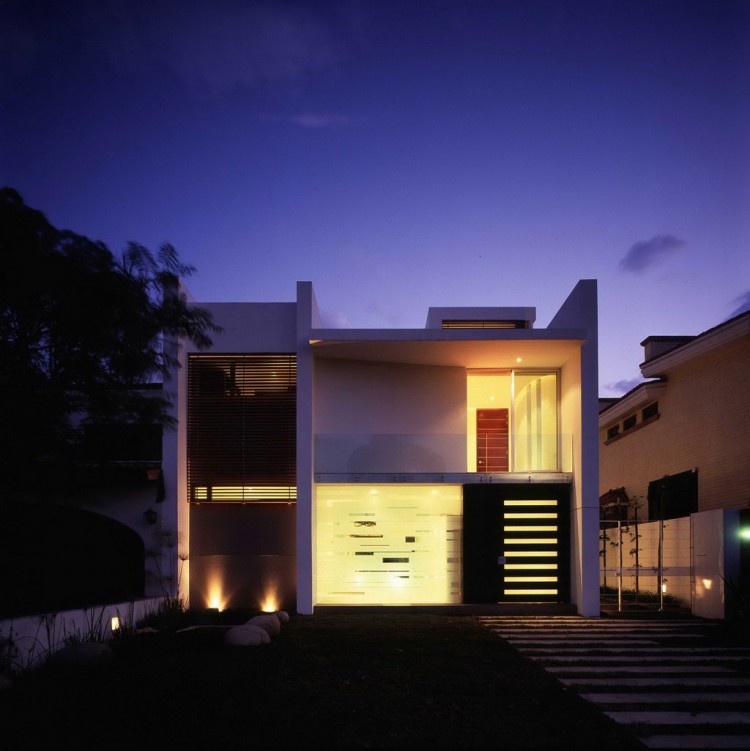 “Over a triad of walls which conform it’s architectural plan, and achieving a graceful geometry of three elements, the T House works and operates efficiently with aesthetic concepts as its spatial authority.

With a simple package program in each one of it’s floors, the T House raises from a rectangular scheme. Whereas packages on the first floor contain the services (kitchen, laundry, patio and service) and social activities (entrance hall, living room, dining room and bathroom), the double section on the second floor, encloses mostly private areas (bedrooms, TV room and bathrooms).

Based on the three walls that hold within the described packages, the T House responds to an architecture that reflects the back to basics. Subdivisions are much more than subtle, if not inexistent.

The main goal of T House is to satisfy the contemporary way of life scenario requested by a dedicated follower of design client.
View in gallery

This is the reason why the site plan is developed from this central idea. Spaces, material, and even details, were carefully planned around this global concept, exposing it easily as it can be. For instance, the marble had to be opaque for this house, and the shower accessories had to be selected from top designers.

Due to the symbiosis between architecture and thought, every single detail passed through a meticulous  selection process of its material and finishing, and the result ended up more than genuine: three parallel walls facing a background where borders dismantle themselves, becoming light filters from the gardens to the interiors.

The T House is, itself, a set of see through skins that shift life images and carry the opaque conditions of any material to transparency in a continuous movement.”