Two hours north of New York City, following the Taconic State Parkway through a picturesque countryside highlighted by orchards, horse farms and vineyards, the site is eventually accessed through Moore Road by a private driveway.”

“Situated on top of a gentle slope overlooking a pond, the house is surrounded by dense vegetation to the south and north, while commanding a vineyard view to the east, and a view of the distant Black Dome Mountain to the west. The 2,000 square foot house is designed as a weekend retreat from hectic city life, as well as, for entertaining friends and enjoying the nature and the countryside surrounding it. After studying the programmatic, functional, and budgetary requirements, the proposal formed the plan for a hybrid of the New England Salt Box typology: a 50’L X 20’W X 25’H rectangular box with 11′ high public spaces on first floor and 9′ high private rooms on second floor. In accordance with the local ground conditions and building tradition, the construction consists of concrete foundation/footings, supporting a wood framed enclosure with spatial layouts based upon standard modular construction dimensions. 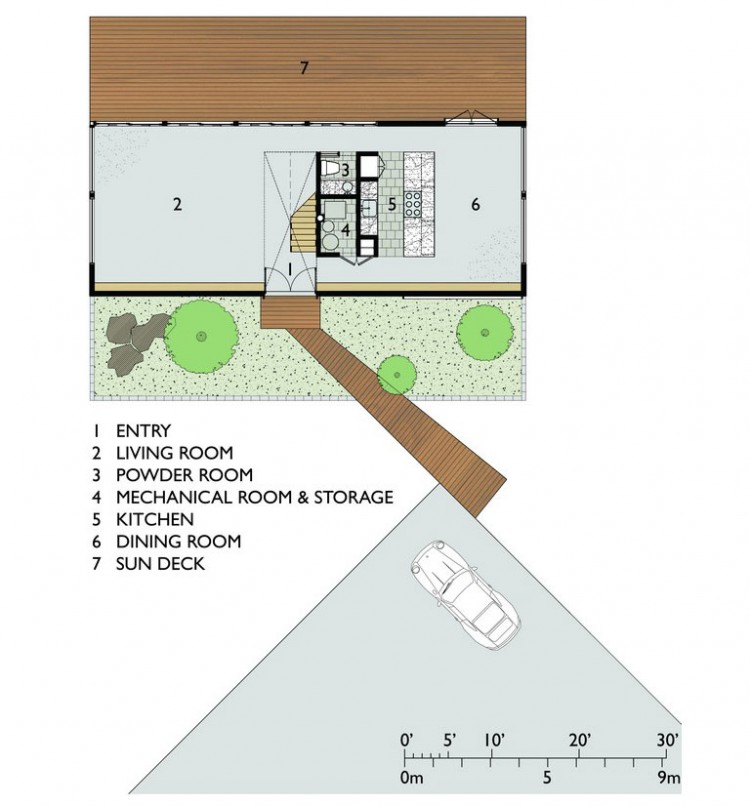 As one approaches the house, an elevated ramp cuts through the manicured garden, leading up to the entrance through the first floor concrete façade which is formed by the foundation slab folding up vertically, providing internal storage wall functions, and framing selected visual vistas through openings at different heights.

The first floor’s functional organization pivots around a square service core located in the center of the rectangular box. Composed of a Storage Closet, a Powder Room and the Kitchen, the service core divides the first floor between the Living Room on one end and the Dining Room on the other. Beyond the concrete entry wall, the southwest façade dissolves into floor to ceiling metal-framed glass planes encasing the Living Room and Dining Room, providing a panoramic view of the scenery on all three sides. Opening the sliding glass doors allows access to the Sun Deck which acts as an ethereal transition between the indoors and outdoors.

A two-story atrium with a staircase connects the ‘public’ first floor and the ‘private’ second floor. The second floor’s service core, composed of a Guest Bath, the Master Bath, and the Master Closet, stacks on top of first floor service core below. Anchored to the staircase along the rear of the house is the Bedroom Hall which provides circulation through the second floor. The Hall’s movement is accentuated by the light and sky filtered through a continuous horizontal strip window along the upper third of the wall, whereas, the Study and the Bedrooms command specific views framed by larger square and rectangular windows. The combination of horizontal wood siding around the running strip windows and vertical wood siding surrounding the square and rectangular windows, further reinforces the expression of the different window types, and introduces different textures which disintegrate the Salt Box typology visually, eventhough its volumetric integrity is preserved.

Attention to human scale and material detailing is integral to the design throughout the house, as evident in the spatial proportions of public spaces and private rooms, along with detailing ranging from corner windows to concealed cabinetry. Similar in spirit to Shaker houses built in the Hudson Valley, in years long past, the house’s functional and contemplative character can be seen as a modern reinterpretation of house on the prairie.”