According to the architect, “this project is an example of “liquid qrchitecture” whereby projects are designed parametrically using 3D softwares to respond to environmental issues”. 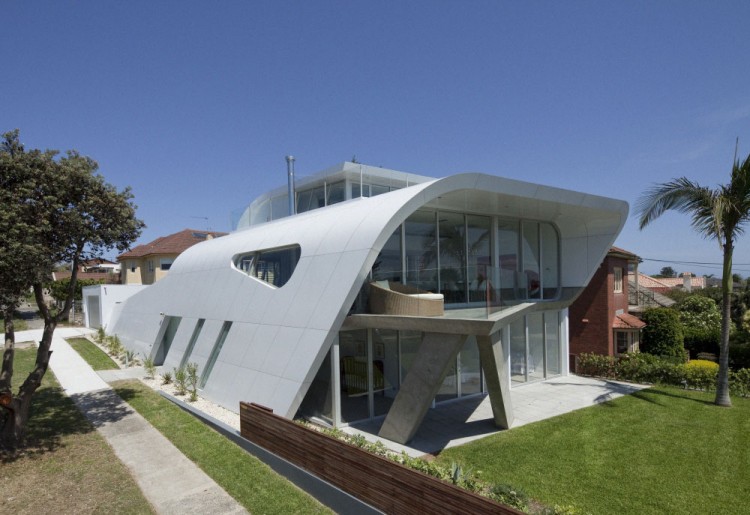 “This family house faces onto views of the Sydney Opera House and Harbour Bridge. The house explores a more environmentally sensitive form of design called ‘micro design’. Micro design utilises parametric modelling software which can respond to very small changes to design input criteria. The unique form is a response to the requirements to maintain view and solar corridors.

We started by responding to the site with a series of movements which folded and twisted the space in order to maximise the changes of level, view opportunities and potential for connectivity to outside spaces at various ground planes. We created a dynamic model capable of responding to changes in these variables and allowed the models to run in real time. We then stopped the model when we felt we had a model which satisfied our concerns.

The house has a fluidity of space which is a direct result of having a strong relationship with the surrounding landscape.

Due to the complex geometry of this house and the need for such fine tolerances, we had to evolve a completely new system of fabrication and assembly for this house.

We started off designing a house, but in the end the construction process more closely resembles that of a car.

Early on it became apparent that this house would have to be detailed and documented entirely in 3 dimensions. The steel frame house is being clad in metal panels which are being pre-cut in China. The complex curving structure is like the ribs of the human body and must fir within a very slim cladding zone. The tolerances are very tight so if anything is out by even a few millimetres, the ribs will stick out from the skin. It took about 12 months to finalise the steel chasis. This involved developing the structure as a 3 dimensional model and continually checking it by inserting it onto the 3-dimensional to make sure it fit. This model was continually checked against the computer model being prepared by the still fabricators until it was identical and all junctions were resolved.

In a traditional house the floor and walls are built first and the roof is added. The Moebius House is being assembled around a chasis like a car would be. First the chasis is assembled on site. Then the pre-formed metal cladding panels are attached to the chasis to create a monocot shell. The house is wired and plumbed like a car, with the electrical, air conditioning and services all wired through the chasis. The kitchen even resembles a dash board.

We are exploring an architecture which is more responsive to the environment, We refer to this as ‘Elastic Design’. This is architecture that is pliant, yet has an inherent structure and ordering principle. Elastic Architecture is an architecture that is capable of responding to all manner of changing variables. This includes spatial, programmatic, environmental and structural issues. We are designing spaces which expand to allow greater connectivity to the exterior environment to maximise light, air and movement flows, or retract for greater privacy and differentiation of uses.

These are spaces which respond not just to program and uses, but to patterns of behaviour which change through time. We are envisioning dynamic buildings which responds to variations in inputs and relationships. The result is an architecture which is ‘future focused’ in thinking, open and responsive in approach, and experimental in nature. This is an architecture which is supple and responsive, reactive to changing variables and assisted by new technology.”

House with Eaves and an Attic by On Design Partners

Apartment in Warsaw by Hola Design