Villa Sow in Dakar by SAOTA

This two-story contemporary residence was completed in 2011 and is located in Dakar, Senegal. 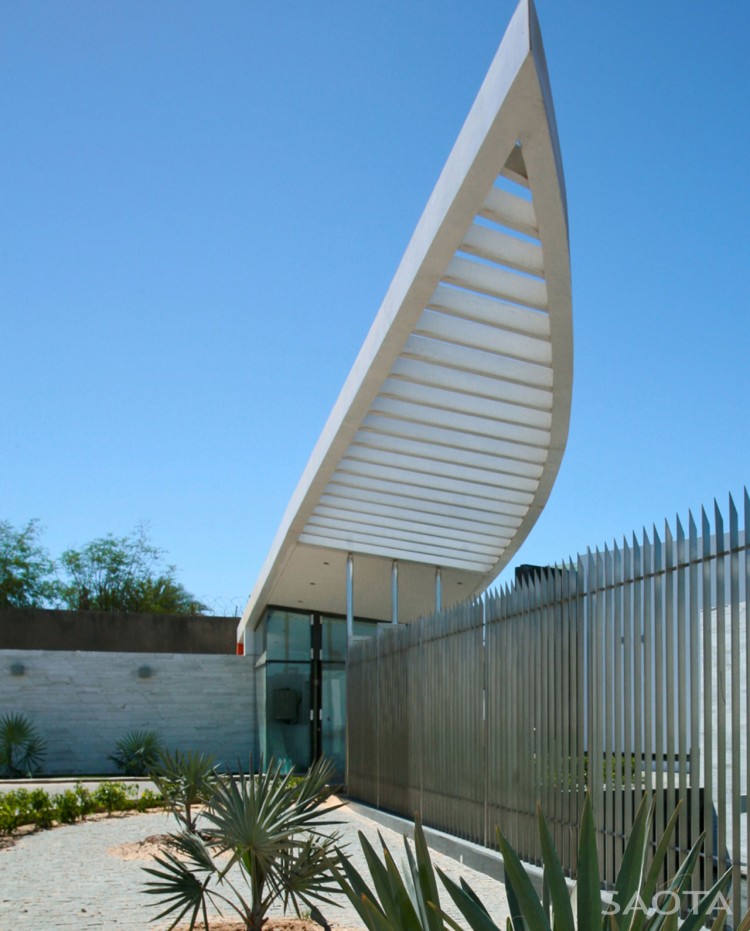 Situated on a cliff side overlooking the Atlantic Ocean, Villa Sow in Dakar was completed in 2011, with SAOTA (Stefan Antoni Olmesdahl Truen Architects) as the Architects and ANTONI ASSOCIATES doing the Interior Decor. The house was designed for a Senegalese businessman and his young family.

Built on the site of an old World War Two bunker and on the edge of a cliff, Villa Sow is the result of a careful analysis of the sites parameters and opportunities. Part of the old bunker has been retained and a portion of it now houses an underground cinema that opens up into a water courtyard in the entrance of the house, and is connected back to the house via a timber panelled walkway towards a spiral staircase that runs from the lower ground to the first floor level of the villa.

‘Whilst the cliff side site presented an extraordinary opportunity for a house on the edge of Dakar’s CBD the slowly eroding nature of the cliff face required a very carefully considered structural solution.’ says Greg Truen, resulting in a building design that seemed to float off the cliff’s edge.

The ground floor of the house is designed to facilitate convenient entertainment both indoor s and outdoors and is furnished to enjoy panoramic views of the Atlantic Ocean, and the pool terrace area. With articulated terraces, bequeathing each room an unfettered view of the sea, it’s no wonder that the main reference point of the house is the hallway from the study area to the kitchen, with all rooms extending from it. The orientation of the rooms in the house is all based on the best ocean views.

The study / office sits in a separate block joined to the main house by a hallway. Under the study/office sits a separate fully contained guest room, sitting on the very edge of the cliff, alongside which sits a private gym and reflecting pond. The main house has a lounge with a double volume space, a top of the range kitchen, barbecue terrace and pool terrace, as well as a gaming/family room.

A main feature in the house is the spiral staircase, clad in stainless steel, and the treads made of white granite. To add to the grandeur of this architectural element, there are 20mm in diameter stainless steel rods running from the first floor handrail to the lower ground floor, thus making the stairwell look like a sculptural steel tube.

The first floor houses the children and master bedroom. Clerestories and aluminium screens, coax illumination alongside the carefully framed north eastern views. A skylight above the stairwell and floor to ceiling glazing in the lounges add to the sense of transparency. The master suite opens up into a terrace with views of the ocean in the south western direction, and a private garden with an outdoor shower in the north eastern direction. The result is a cleaver and sophisticated hierarchy of spaces, each room situated to take full advantage of indoor-outdoor living.”

Cove 6 by SAOTA and Antoni Associates

Nettleton 199 by SAOTA and OKHA Interiors