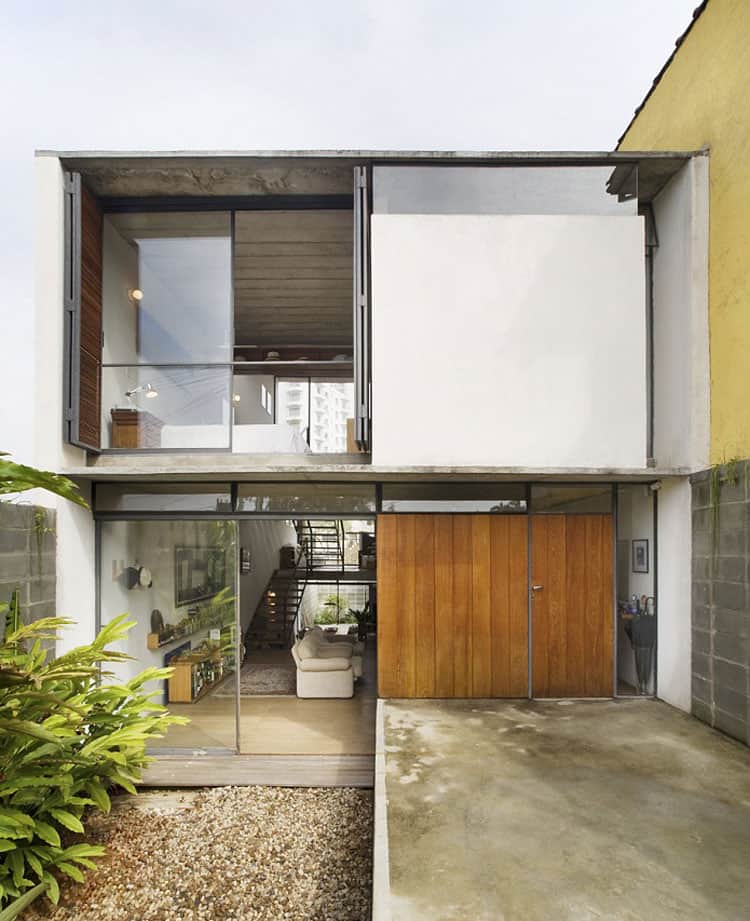 “In designing our house on an urban plot with dimensions of 6 x 24m, located in Rua Juranda, Vila Beatriz, São Paulo, we were forced to establish certain criteria for the construction of a house of approximately 150m².

As the terrain of the plot had an accentuated slope, the bottom of the plot being over three and a half metres below the pavement level, the building was distributed over half levels, separated by a three storey void which contains the staircase access to the floors. This void organises the spaces of the house: living room, dining room and kitchen on the ground floor as well as three bedrooms, two bathrooms, office and a ‘deck’ on the upper floors. The house is built up to the edges of the plot and consequently it is lit and ventilated from the front and rear.

The idea was to make the house as transparent as possible, in a way that would establish a relationship with the external areas. In order make this viable, we designed the openings at the front and rear of the house to be on the same axis and to be three metres wide. When open, the glazing elements slide behind the walls uniting the internal and external spaces. We sought to execute the construction work in the most economical manner possible. From the start, we tried to avoid as far as possible any kind of earth moving, which is always an onerous part of the budget of any construction.

For this reason, all of the slabs, including those on the ground floor are supported on the structure of the lateral walls of the house. The house is given structure by steel reinforced concrete cast on site with the slabs in prefabricated concrete remaining visible after construction. All of the brickwork is in ceramic blocks covered with a white render. We opted to put all of the house’s infrastructure on the lowest floor, making use of the nature slope, this includes: a water cistern, boiler and sewage treatment system.

Overall, this is a project that tried to limit the dimensions, to the strictly necessary, of areas such as bedrooms and bathrooms so that the communal spaces would be more generous even within this narrow plot, promoting communal living, preferably with friends.”

“Sun from the West Coast” by Alfonso Ideas

The Breezehouse by Blu Homes

Beautiful Mid-Century Home in Pasadena by McCarthy, Zemke and Hartfelder