Saint Emanuel House by Ronnie Self

Houston-based studio Ronnie Self has completed the Saint Emanuel House project in 2009.

This 1,600 square foot contemporary residence is located in in Houston’s Third Ward, Texas. 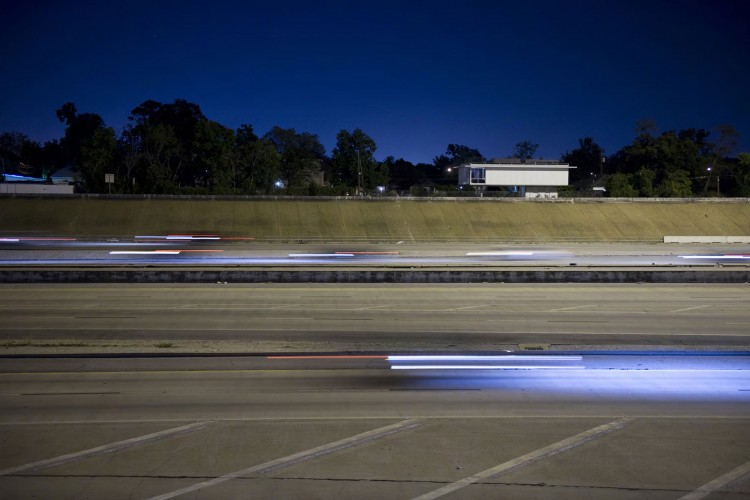 Saint Emanuel House by Ronnie Self:

“The Saint Emanuel House captures Houston: a city made of skyscrapers, freeways, single family homes and lawns and gardens.

The Saint Emanuel House is located in Houston’s Third Ward. In one direction, it looks over 16 lanes of depressed freeway (hypnotizing in itself – especially at night), toward a spectacular and unobstructed view of the downtown skyline. In the other direction, there is a traditional neighborhood of small wood-framed houses and dense vegetation. The house mediates between the two.

The site is robust. The house is likewise strong in its geometry and overall gesture. It parallels the freeway and is pushed toward it in order to preserve a large garden oriented to the neighborhood. It is lifted into the air on concrete walls and columns to take better advantage of the views. The tapered, cantilevered concrete slab that supports the building responds to the nearby elevated freeway ramps and bridges without mimicking them.

A roof deck floats over the house and functions like a giant parasol providing shade and a ventilated cavity above the waterproofing. The roof deck allows other, more distant views to the Medical Center and the Galleria areas of Houston, both several miles away. It also provides a wide open panorama of the ever changing Texas sky.

The house is modest in size with 1,600 square feet of conditioned space. The building plan is generally rectangular with one side splayed to follow an angled property line. Inside, public spaces are extraverted and flow around the stairwell that pierces the concrete slab at its center and threads together the ground, the home and the sky. Transparencies and reflections open and connect the living / dining, galley kitchen and study to each other and to the outside world. Private spaces are more intimate. The two bedrooms, conceived as sleeping chambers, are oriented toward the garden only. The bathroom, in the middle of the house, has no view out but is dramatically lit by horizontal clerestory windows that pop through the roof deck.

A circulation axis runs parallel to the freeway the entire length of the house and links all spaces. Full height windows at both extremities give a sense of endless space. In this small building, a wide variety of spatial qualities, views and vistas makes it more generous than its actual size.”