Casa Pezo is part of the Solo Houses concept, a small collection of a dozen of vacation homes designed by different young international architects still to be built.

Designed by Chile-based studio Pezo Von Ellrichshausen Architects, this unique 2,150 square foot home is the first of the series to be set in Cretas, a municipality located in the Matarraña comarca, province of Teruel, Aragon, Spain. 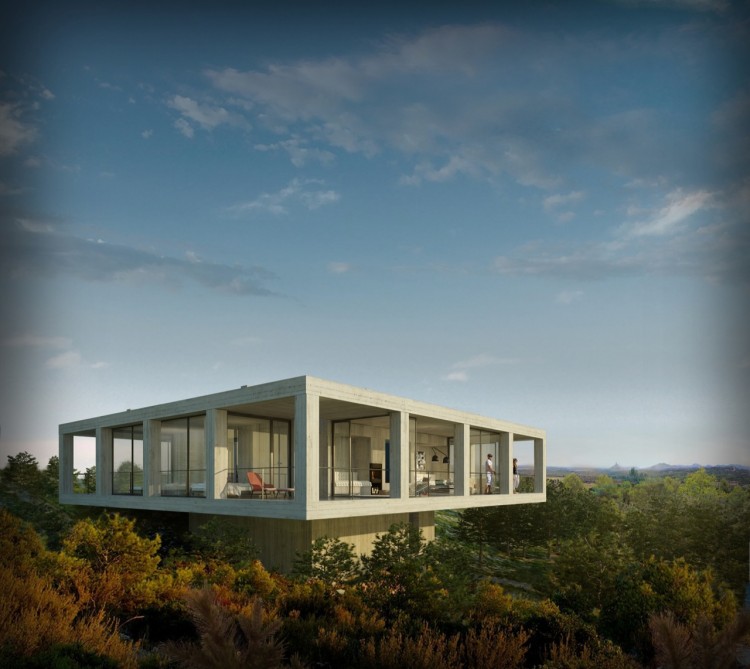 “This is a singular piece that occupies a dominant position in the landscape. It is a horizontal figure separated from the ground. A sculptural structure, unitary and monolithic, that is supported by a blind podium. An elevated condition visible from a distance and another that disappears under the foliage. The platform’s aerial world establishes its own cardinal directions. A perimeter ring, a panoramic rotunda measured by sixteen columns at regular distances, is occupied by a sequence of rooms with informally defined functions. Transparent and symmetrical rooms articulated by open corners.

A portico too narrow as to hold a static room and too deep as to hold a vigilance balcony. On the platform’s aerial world there is a single interior room. This room has no roof. It is barely perforated in all four directions of the landscape and its base is occupied by water, a volume of water as profound as the high that separates the house from the natural ground. This contained water, the softest patio known, always finds the way to move the sky to the bottom of the earth.”

An Ordinary House, Until You Push the Button! (Video)