Milan-based studio Federico Delrosso Architects has designed the interior of a triplex apartment located in an early 20th century building in the heart of Monaco. 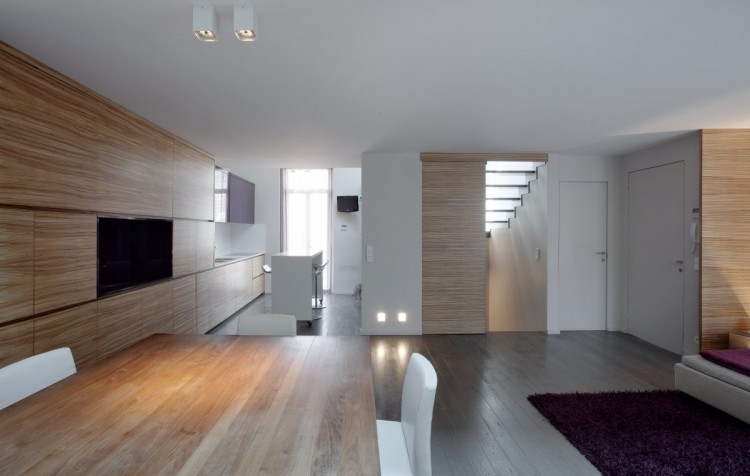 “The project for a private residence invariably has to take account of the client’s family structure. The house is a kind of exoskeleton in which human relations, even before family ties, develop and find their balance.”
The design of this new apartment by Federico Delrosso starts from the specific request for a house that could accommodate parents and children, some from previous relationships.

“Everything grew out of the fusion and radical restructuring of three existing apartments in an early 20th century building in the heart of Montecarlo. The first act was the creation of a new staircase, completely independent of the condominium stairs. I wanted this new internal staircase for the exclusive use of the family to create a clear link between the three levels, though they are aesthetically independent.” With these words Federico Delrosso introduces his project which was completed in 2010 after about 18 months’ work.

“For this apartment, laid out with a specific family vocation, I decided to differentiate the first levels in a generational key. The first floor, the most ‘crowded’, is devoted to the children. The second, more intimate and compact, is for the parents.The third floor is designed for living together and hospitality, hence the living room and kitchen. It ends in a loft space where informal and compact space become a place of happy anarchy for relations and activities: partly study and partly leisure area.”

“With this division of space I have created a home with reverse vertical development … The entrance is at the top, on the third floor, housing the living room and loft. Descending we come to the most private areas (night/study): the second floor for parents and youngest children, and the first with direct access from the condominium stairwell, the floor devoted to the older and more independent children.”

“The strong emotional relations between family ties and the independence of the subjects, then prompted the use of two elements – one aesthetically very conspicuous, the other almost intangible – which could be perceived as the common denominator of the whole home. This is zebrano wood, which I have used for furniture, doors, partitions … and an imaginary vertical line running through each floor and materializing only in the last section where it intersects the roof and becomes a slender steel cable attached to the central girder. It’s highly visible, deliberately given a very mechanical appearance. It conveys the idea of strength and lightness at the same time, being reliable yet not intrusive…”

“The grey oak, which I chose for the floors is paired with zebrano, its distinctive texture creating a very natural and warm ambiance with an almost wild character for the interiors. It manages to soften the rationally orthogonal spaces, and it works very well for ‘coloring’ at certain points the icy white of the walls (doors, shelves, paneling…).

The color of the zebrano goes well with both warm tones and cold, without limiting any subsequent color choices made by the occupants, in terms of furnishings and accessories. It’s an element that supports but does not preclude the evolution of this home … Almost a metaphor for family relationships.”

Renovation of a Private Home by Federico Delrosso Architects