This two-story contemporary residence is located in Pollença, on Mallorca, a Spanish island in the Mediterranean Sea. 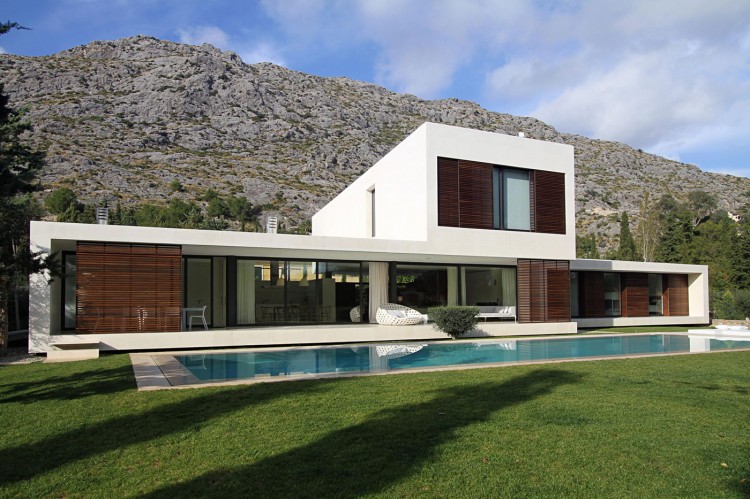 “Situated in an attractive place, in Pollença, Mallorca, the house is represented as a white rock, hollow towards the South, that makes it look lighter. Designed by the architect Miquel Ángel Lacomba who emphasizes the importance of the client as the fundamental part in the correct execution of architecture: ´Working for this family made me go further in my job, seeking essentiality and a straight language´- claims Lacomba, ´It has been a process in which the participation of the client was intensive. This is strongly related to my conviction that the architecture should be clear and balanced. Our dialogue has completed the project and opened it to different visions´.

The clarity and the balance are the result of this rapport between the client´s wish and the creative resources of the architect. Constructed in the back of the plot, the house seen from the garden appears in all its splendour of harmony, against the curtain of the mountains in the background, the big mass of calcareous rock. The volume of the house, longitudinal, is resolved in only one level, except the solid of the main bedroom that overhangs respect the rest of the building.

The construction transmits a serene unity because of the transparency of the geometry and the unique sandstone facing in the facades, pavements and inclined roofs. Beside the solidity of the house appear light sliding shutters made out of Iroko wood, setting regular, rhythmical and mobile intervals, providing protection and filtered light projection on the porch. 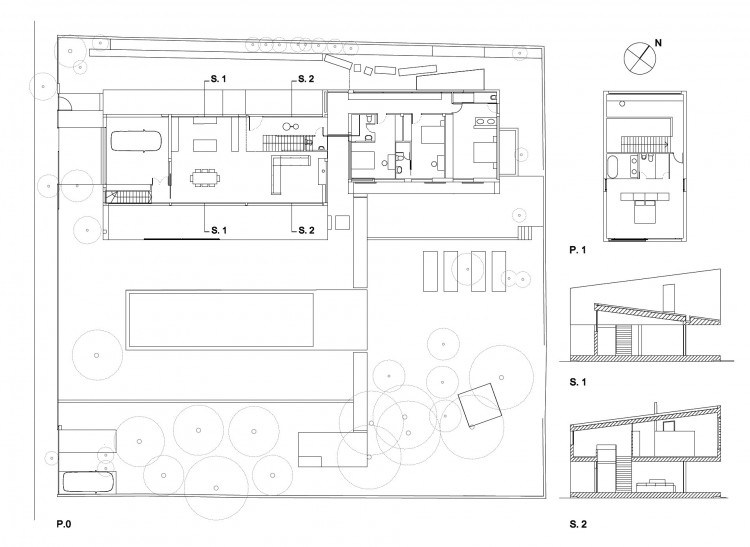 Next to the sensation of calm and unity, there is a touch of tension, at the point of the union between the day- and night- living areas, a void which separates in two pieces the volume that seemed to be one longitudinal unit.

The day-living area is formed from one side by the big space of the kitchen, the dining and living room, from the other it is situated in the pavilion destined for the night-living part of the house.

The sandstone floor applied in the interiors creates the same luminous effect that the exterior walls. The wooden stairs are a powerful detail inside this neat geometry and evanescent atmosphere that organizes the space on this floor and leads to the higher level that consists of the main bedroom and the open studio with cathedral ceiling.

Once again in the garden, glancing at the house for the last time, there is a remarkable particularity: The inversely inclined roofs of the lower and higher volumes, allow to perceive the mountain through the interior spaces.

House in the Garden by Cunningham Architects