Toronto-based studio Architects Alliance has sent us photos of the Green-Blais Residence.

This 3,500 square foot home is located on a rolling field overlooking Beaver Valley, a valley in southern Ontario, Canada. 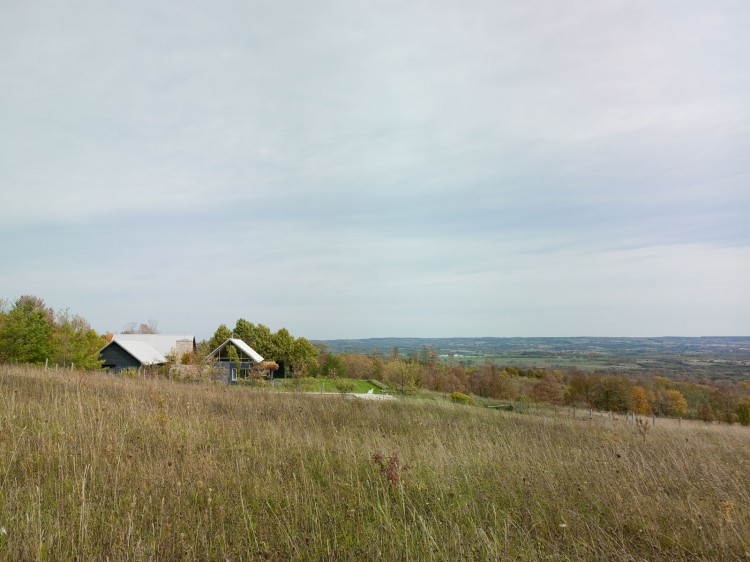 The Green-Blais residence is located on a rolling field overlooking Beaver Valley on the Niagara Escarpment, one of Canada’s most significant landforms and a UNESCO World Biosphere Reserve. The Valley was settled by European emigrants in the early 19th century, and was a major agriculture and logging centre throughout the 19th and early 20th centuries. More recently, tourism and recreation have overtaken these traditional uses, and the Valley has become a popular location for second homes owned by residents of the major cities of southwestern Ontario’s “Golden Horseshoe”. The owners of the Green-Blais Residence are one such family.

The Residence is sited on a rolling property, midway up a slope that rises diagonally across the site from northeast to southwest. The slope was regraded to create a promontory from which the house could partake of panoramic views of the Valley. An access road ascends from an entrance point at the southwest of the property, through an apple orchard, following an S-curving path up to the Residence. The main house and a stacked garage/studio stand on either side of the drive court, framing a spectacular view of Beaver Valley (plans are underway to construct a second outbuilding to provide additional sleeping arrangements for guests and the couple’s older children). An allée of trees extends from the drive court to frame a view of fields to the south.

The built form of the Residence, and the arrangement of the main house and out buildings on the site, are inspired by the 19th century farms still visible throughout the Valley. This vernacular architecture is characterized by strong, rectangular forms, and high peaked roofs designed to shed snow during the winter and vent heated air in the summer. Traditionally, the main house and ancillary buildings – summer kitchen, ice house, poultry and cattle barns – are organized around a central courtyard and linked by footpaths. aA streamlined and modernized these strong geometric forms, rendering them in native stone, wood, and aluminum cladding that echo traditional farm building materials. Glazed corridors connect the main programmatic elements of the house, echoing the traditional arrangement of footpaths.

In plan, the main house is laid out to create axial relationships between interior and exterior space, embedding the Residence within the landscape. The kitchen, dining and living rooms look out to a formal grassed yard with views of the Valley. These public spaces flow effortlessly from one to the other, in keeping with the owners’ easy, informal entertaining style. Sleeping areas are situated in two private wings of the house that shelter against the upward slope of the site, and look onto an interior courtyard space, which mediates between the shared living spaces of the east wing and bedroom spaces of the west wing.

An exterior fireplace serves as the fulcrum of the house, the balancing point of exterior/interior and public/private space. A large gate of finger jointed Douglas fir can be pivoted open to expose a view up the hillside to the property’s entrance gate – providing a beacon for visitors, and a view of the welcoming hearth that awaits at the top of the hill.”