Singapore-based studio Bedmar and Shi has completed the Cove Way House project in 2010. 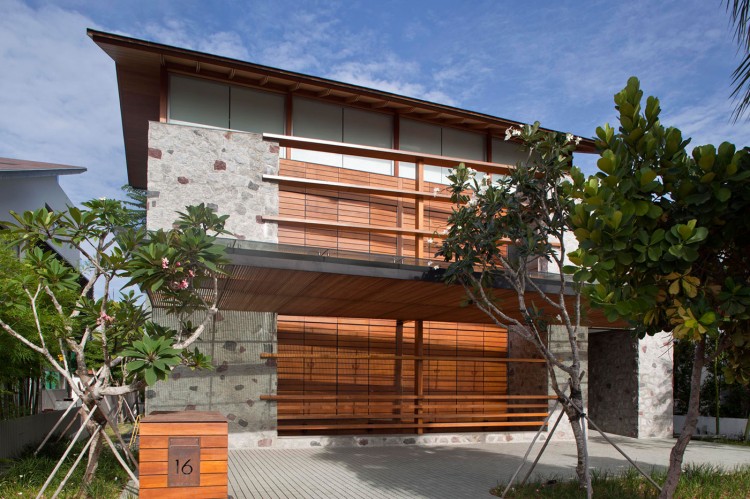 “With a seemingly casual transition between layers of local flora and natural materials, the front lawn of this understated house at 16 Cove Way on Sentosa Island in Singapore gently lures its visitors into its welcoming atmosphere and a slower paced island lifestyle. Two thick and roughly worked flanking walls of granite stones set in thick mortar beds embrace the front entrance of the house and its large over-hanging timber trellised canopy. Recalling somewhat the stone walled buildings in his native Argentina, Ernesto Bedmar is able with this project to redefine and modernize his tropical language and spatial organization while still echoing traditions of craft of the region.

The heavy stone walls grounding the front entrance of the house form a natural portal that allows Bedmar and Shi to recreate a sequence of circulation seen in some of their other projects whereby the house is revealed slowly and gradually to the visitor, with dramatic transitions of light and shadow, and enclosure and freedom. In making the front of the house heavier in language than the back, the designers have also taken advantage of the intrinsic planning reversal in all of the plots of land on the Island, where the front street entrances to the sites oppose the magnificent view of the ocean and canals at the backs of the properties.

In a fascinating dialogue between an expression of carved out enclosure versus a light and airy openness in the house, the front entrance stone walls are tunneled with a long cavernous entrance that ramps up from the main road and envelopes the visitor into its dimly lit interiors. With only slits of openings along the edges of the entrance space, the contrasting framed view into a sun basked rock garden at the end of the portal draws the visitor forward in a distinctly tropical experience of light. The tunnel allows the designers to conceal all the services of the house into its depths while the living spaces are free to face the ocean view at the back of the property.

Once through the entrance tunnel, the dualities in the house’s planning and language are revealed. In contrast to the cavernous entrance, the main Living Room is designed as a lightweight glass box that sits inside what feels like a larger garden room. This “room” is constructed out of full double height teak strip screen walls that pivot outward like a series of majestic doors to allow the room to breathe and become one with the external spaces. The roof of this double volume room is also made of teak strips with a glass sheet above them that make the space feel as airy and light as possible.

Bedmar designed the glass box Living Room to feel like an independent floating volume within a larger timber trellised garden room. The slab of the Living Room floor is pulled away from the floor of the garden room, creating a gap or void into the lower level. The visitor crosses over this void on light glass-floored bridges that accentuate the separation between the two structures. Toward the back of the Living room, a larger void opens up to a wide courtyard space that connects up from basement level to the attic and spans between the two stone walls at the sides of the house. This courtyard is also traversed only by the delicate glass bridges at each level. The openness of this space and physical separation between forms promotes the movement of light and air through the house which is, other than the view out of to the ocean at the back, mainly internally focused. Vertically and horizontally, the courtyard is tied together by a grid of large timber members that double as display shelves and bring the eye up from the basement to the attic as well as visually knit the two side walls of the house together.

The materials used in the house are a mixture of rustic natural finishes such as the roughly worked rubble walls, naturally finished teak, roughly finished textured plaster walls, as well as highly polished modern materials like stainless steel and glass flooring on the bridges between spaces. Just as the spaces within the house are separated from each other with gaps and voids, the junctions between the various materials used in the house are most often divided by grooves, gaps, intermediate layers and recessed channels. The separation of the finishes from each other allows the various materials to exist as independent entities, in a way, to breathe on their own.

The delicateness of the glass connecting bridges between the various volumes of the house is echoed in the vertical connections between floors. The staircase is constructed of a lightweight folding metal plate structure that is connected to the adjacent wall only at the landing and is otherwise separated from the wall with a narrow gap. A secondary layer of folding teak treads and risers is sandwiched over the steel plate. Although this steel plate is relatively thick, at the exposed edge of the staircase, the plate is recessed back from the timber layer above and only a thin plane of the steel is projected outward to further lighten the edge detail of the staircase.

In a clever re-definition of a traditional tropical housing planning arrangement where the rooms are expressed as separate pavilions that sit in a larger garden, this house by Bedmar and Shi operates in a more dense urban situation. The rooms are still expressed as separate entities within a garden but the physical expressions of the “pavilion” and of the “garden” are here modern reinterpretations of the traditional forms and spaces.”

Photos courtesy of Bedmar and Shi

House in Buckinghamshire by McLean Quinlan

2 Comments to Cove Way House by Bedmar and Shi