This 5,000 square foot contemporary home is located in Punta del Este in Uruguay. 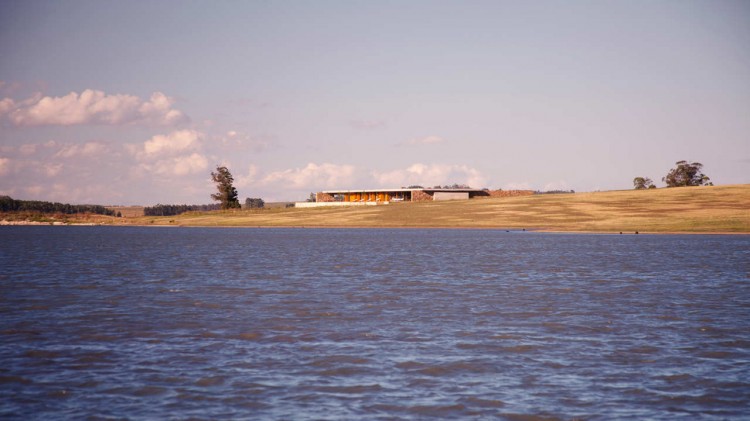 “The Punta House is located on an open lot, alongside a reservoir, in the countryside close to the city of Punta Del Leste, in Uruguay. From the get-go, the location of the residence on this open country wasteland imposed the challenge of creating private spaces and, to some degree, protected visually and climatically. The solution adopted, from the outset, was a one-level house which, on one side looked out to the waters of the reservoir; and, on the other, to an internal patio demarcated by stone walls, which end up defining all of the spaces of the house.

Another fundamental concept was the organization of a plan, clearly and simply, on a flat slab structured by rationally-distributed pillars and supported laterally by stone walls. Under this slab, a wooden box contains the bedrooms (looking out to the reservoir) and the kitchen and utility room (looking out to the patio). At the ends of this wooden box, two all glass enclosed living-rooms organize the collective program of the house. And, under the roof, near the stone wall that delimits the space on the southern side of the house, there is a barbeque and a covered veranda that opens to the reservoir and the patio. In the front of the house, facing the waters, a large deck and pool constitute the project´s principal external living space.

The construction used local material, such as the stone “piedras lajas” of the walls and floor. The wooden box is composed of folding panels of checkered mashrabiya, which enables internal control of lighting. These doors can be opened entirely. The flat slab was executed in exposed concrete, in line with the rationale of using rustic material even in the structural elements.

Little by little, the empty lot around the reservoir begins to take on the house. The wild flowers embrace the house and atop one of the stone walls an oven-bird makes his home, which, according to local tradition, is a sign of luck.”