The architects transformed a former stable building and warehouse into an expansive and elegant single family residence. 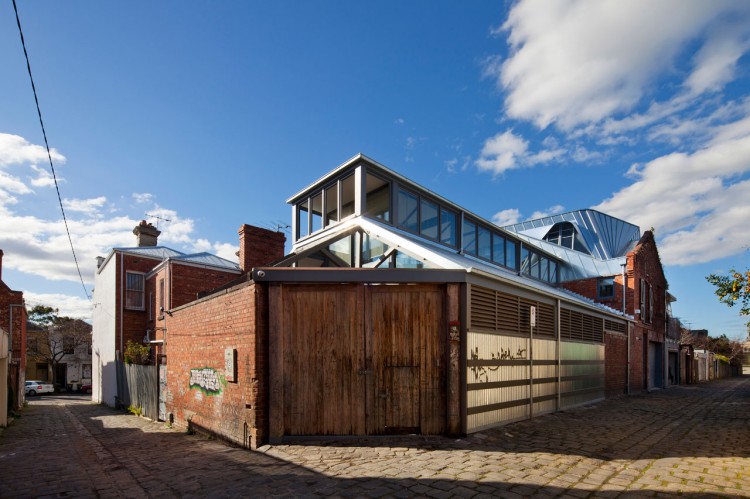 “This project involves alterations and additions to a historic 1830’s building located in the inner city suburb of Fitzroy. Originally operating as private horse stables for a nearby mansion, the triple brick building consists of a double height warehouse space with timber trusses and clerestory windows, adjacent to a two storey hay loft.

The conversion of the building to a single family residence required a response that balanced the heritage value of the existing building (which had been deemed individually significant), with the desire of the client for a high tech environmentally sustainable house that reflected their needs as a tight-knit family.

Although sited in a dense urban setting, the brief called for a “sense of the natural environment and the seasons with views to the sky from the interior”. The clients also commented that the family members “tend to gravitate towards one another from different areas of the house”.

Sitting on “cloud 9” refers to the 1896 International Cloud-Atlas in which, of the ten cloud types, cloud No. 9, cumulonimbus, was the biggest, puffiest and most comfortable-looking. Clouds exhibit both wave-like patterns and fractal geometries – one of which is referred to as an Apollonian gasket.

This geometry forms an underlying system of organization for the house in both plan and section. The main stables area is a large open plan volume where functions are delineated by 360 degree free standing joinery.

A winding mezzanine extends overhead, maintaining visual connection between the two levels to reinforce the notion that this is a house that celebrates “family” as a form of social engagement or gemeinschaft.”

House in a Warehouse by Splinter Society Architecture

Residence of Daisen by Keisuke Kawaguchi+K2-Design