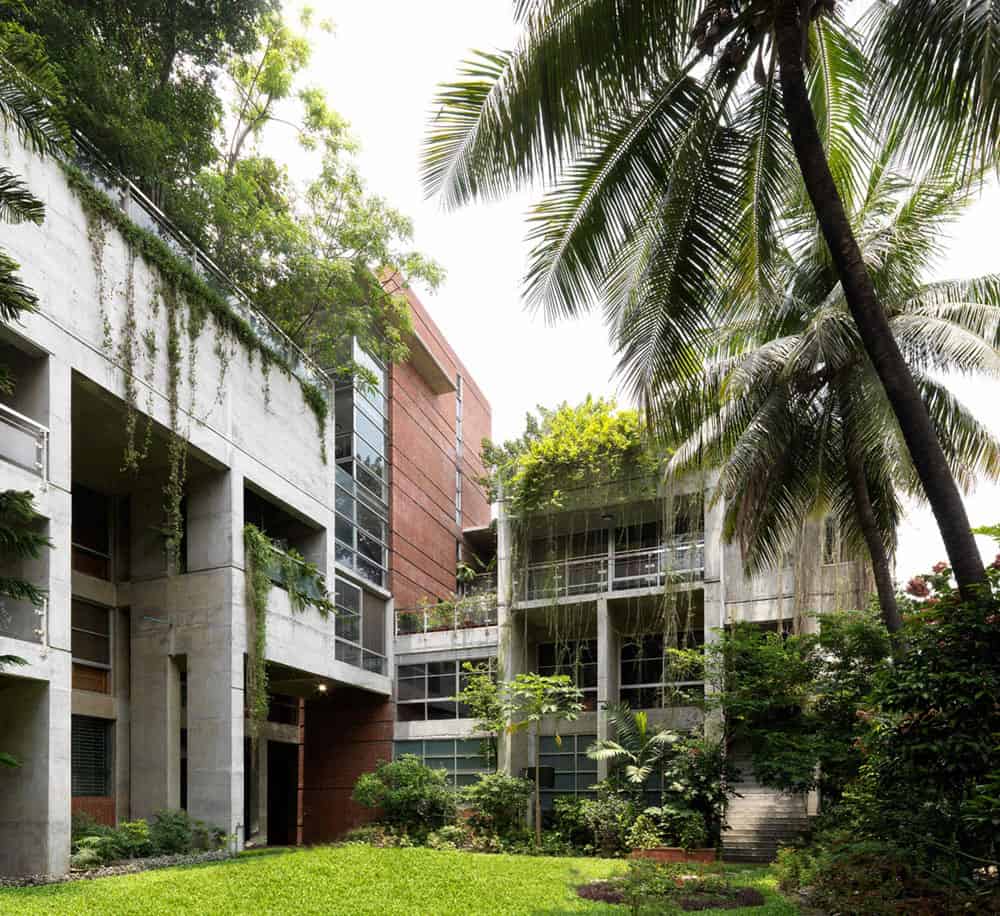 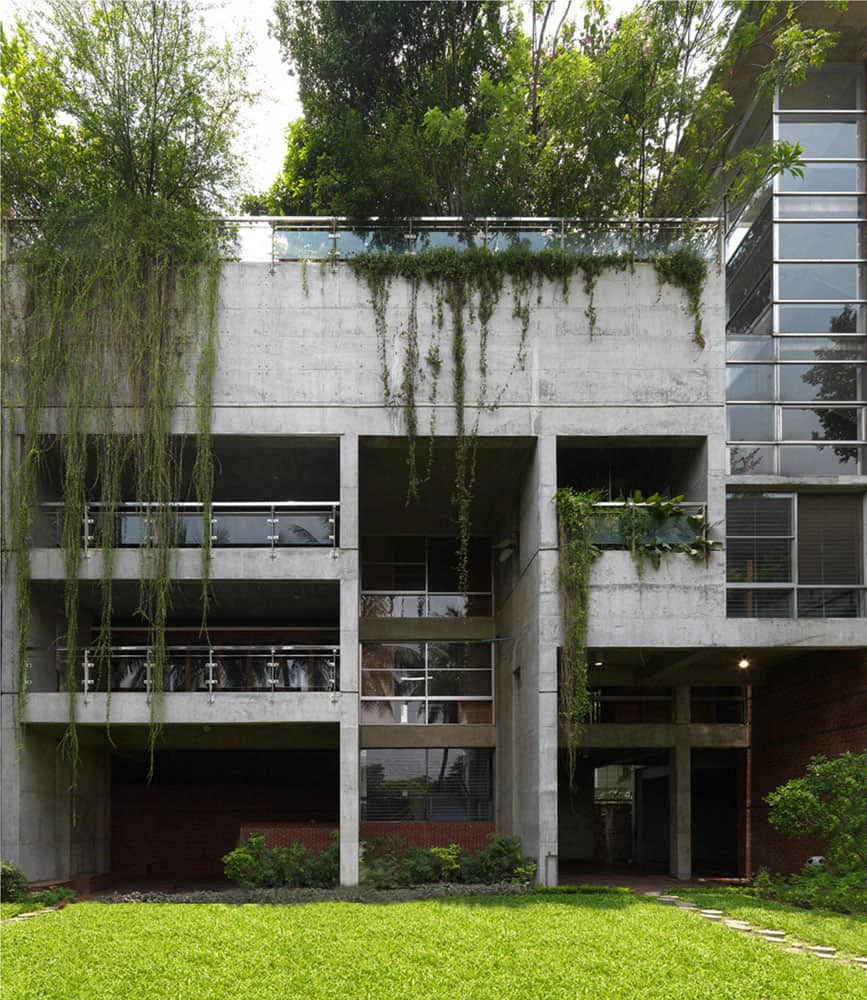 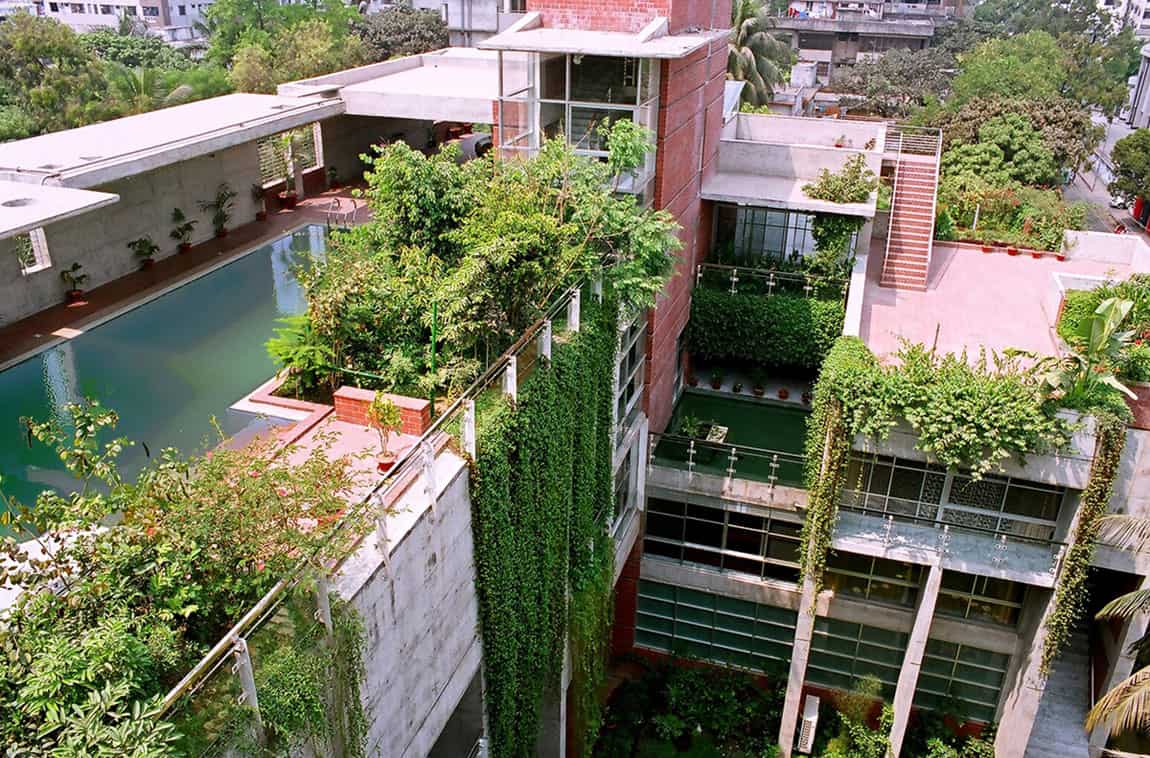 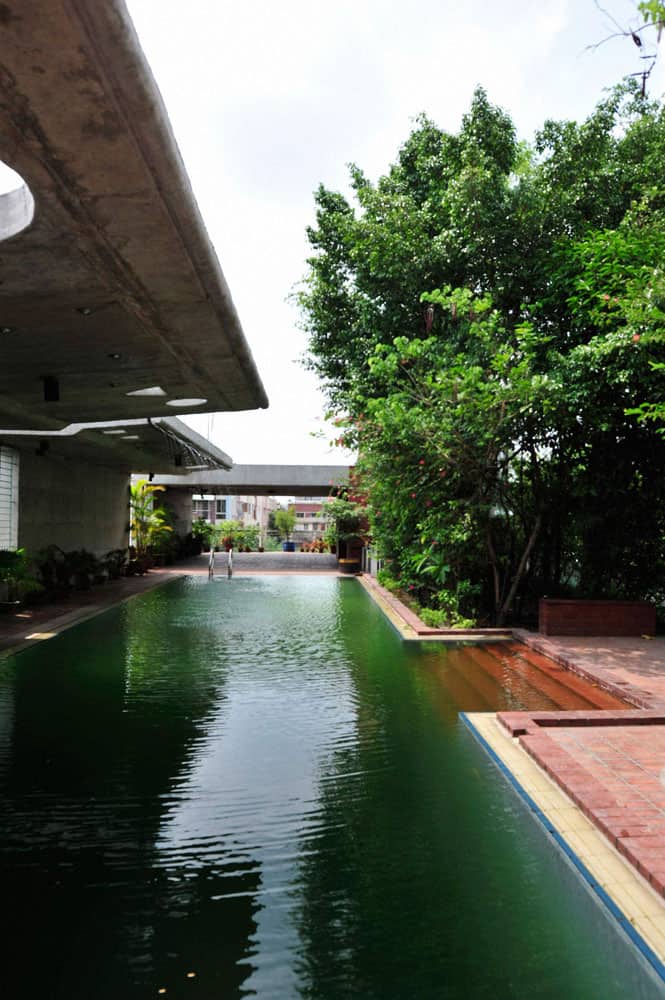 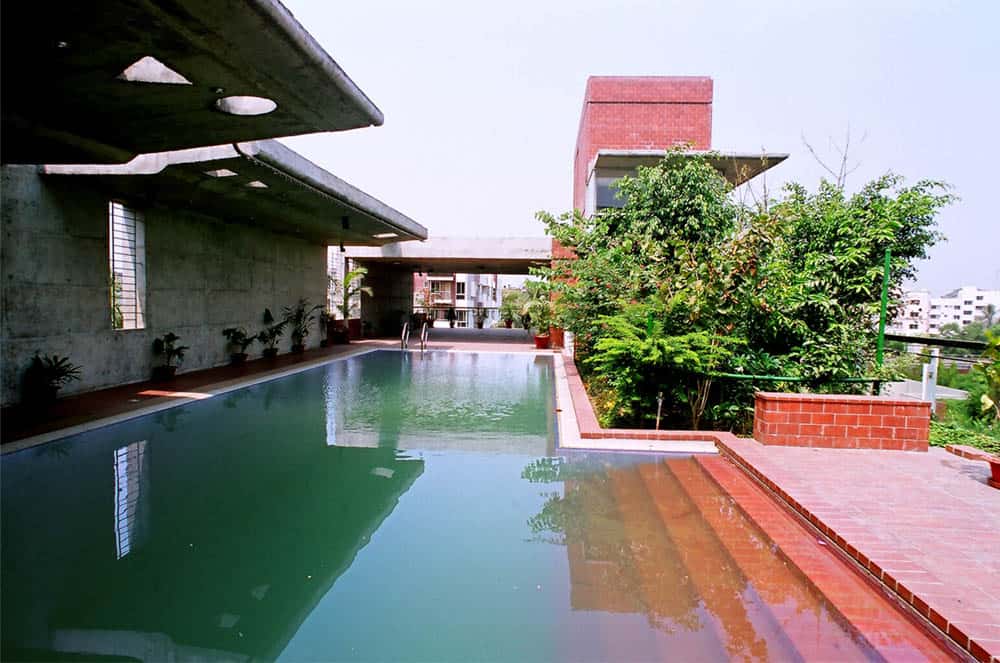 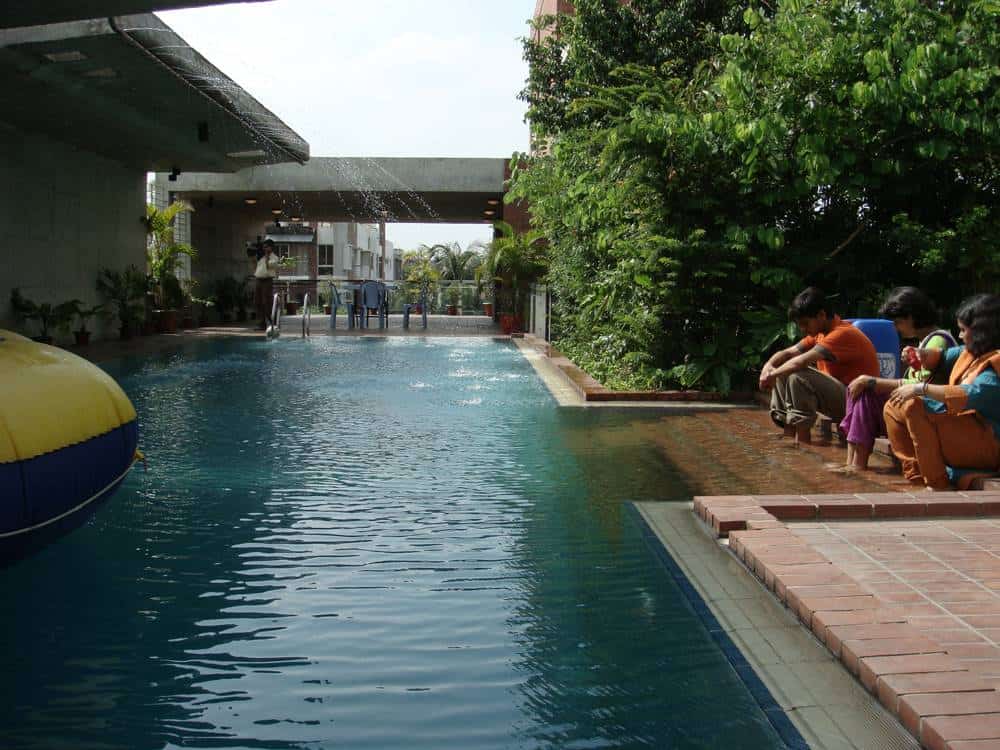 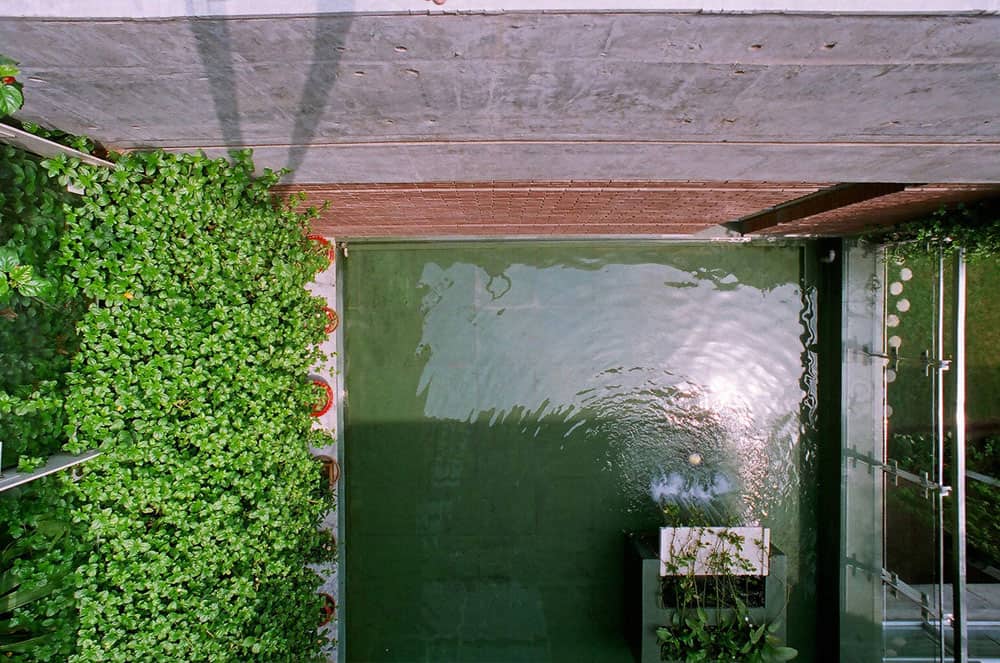 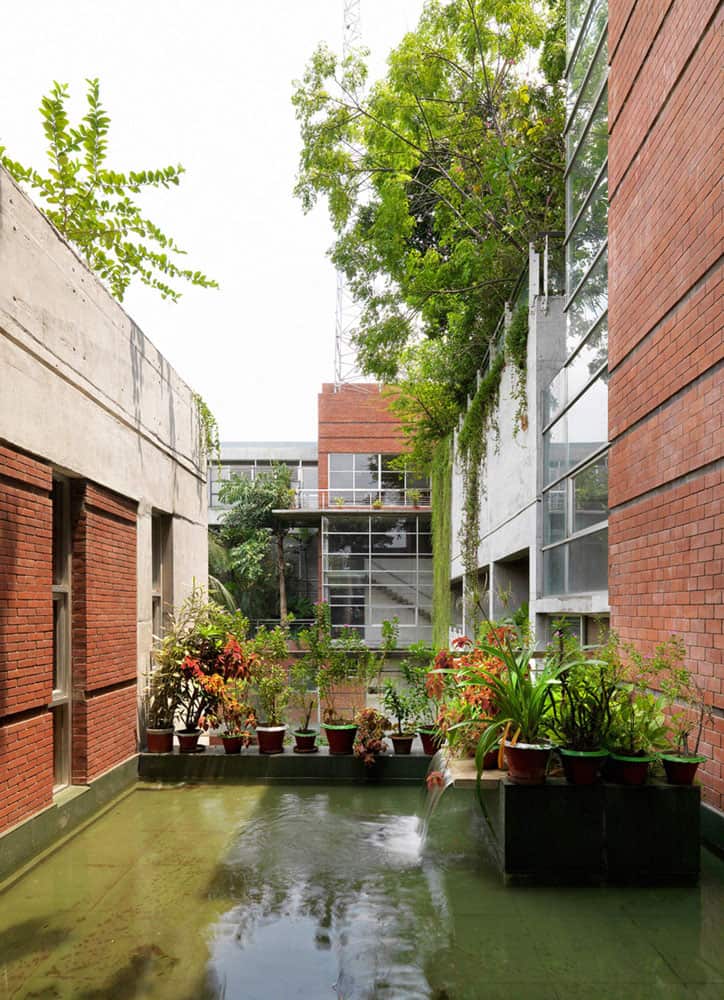 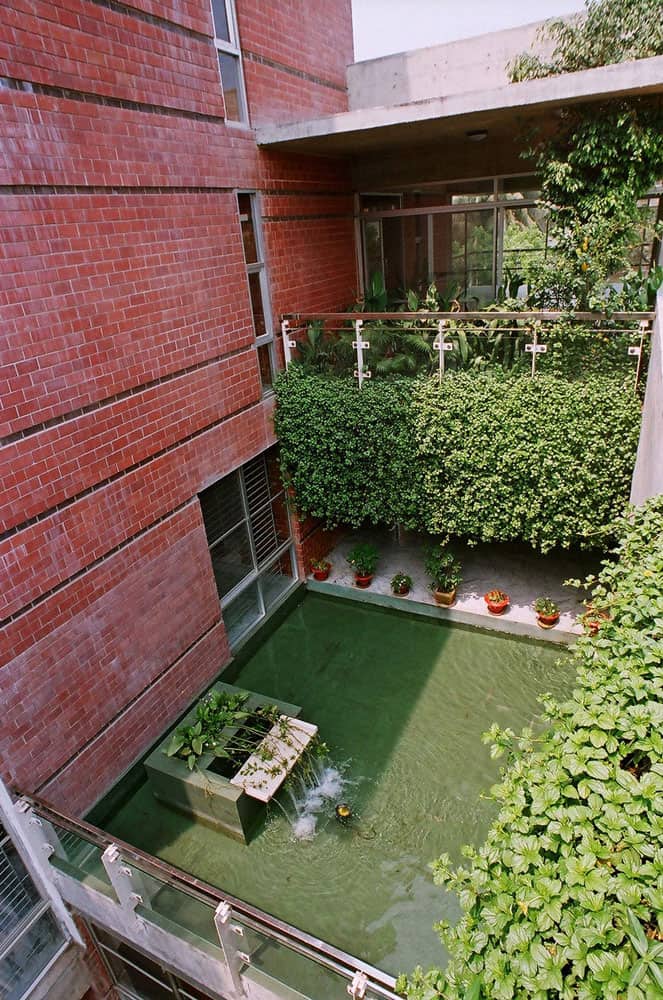 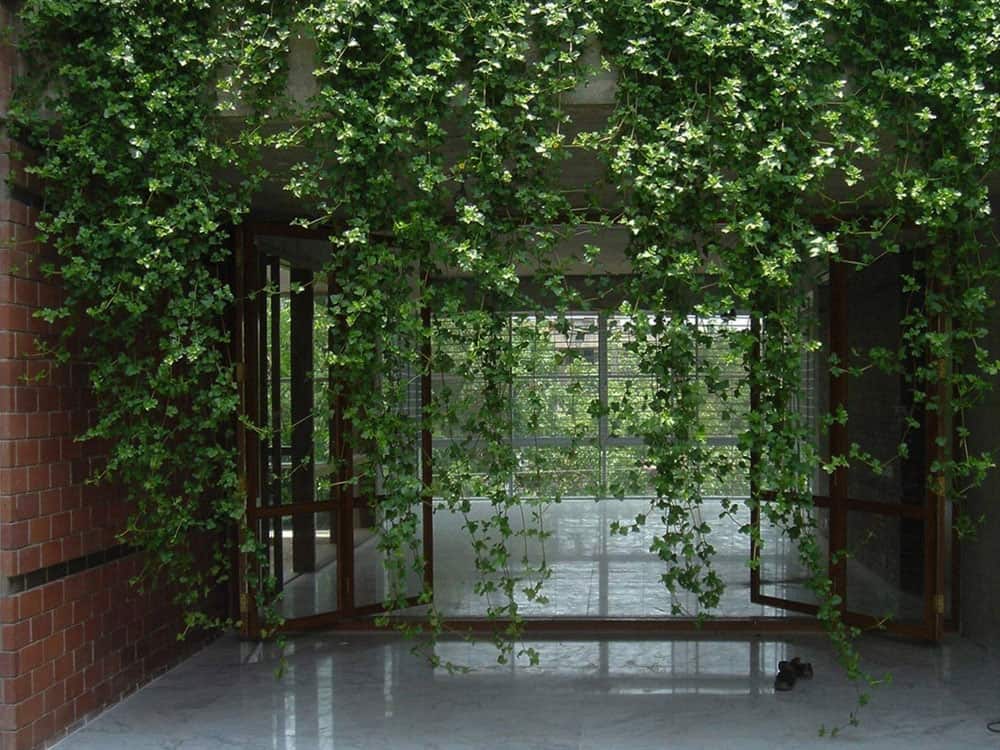 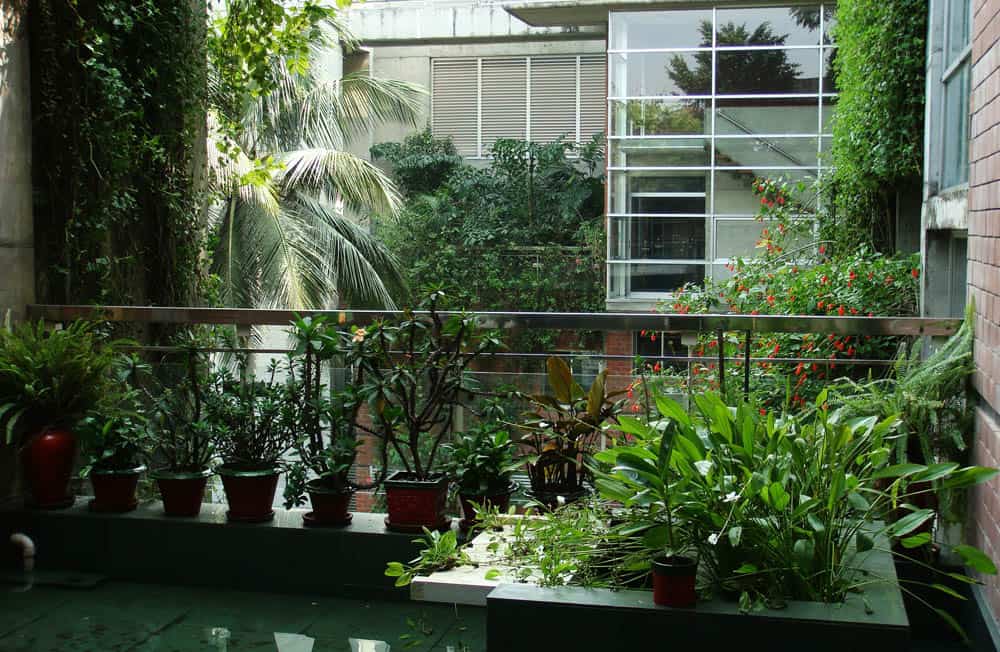 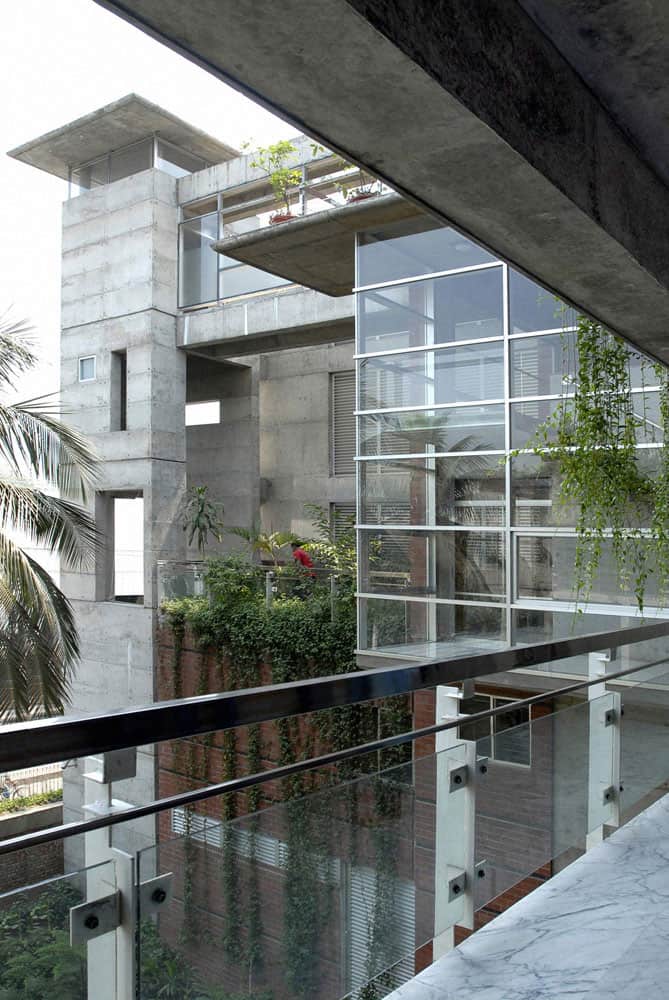 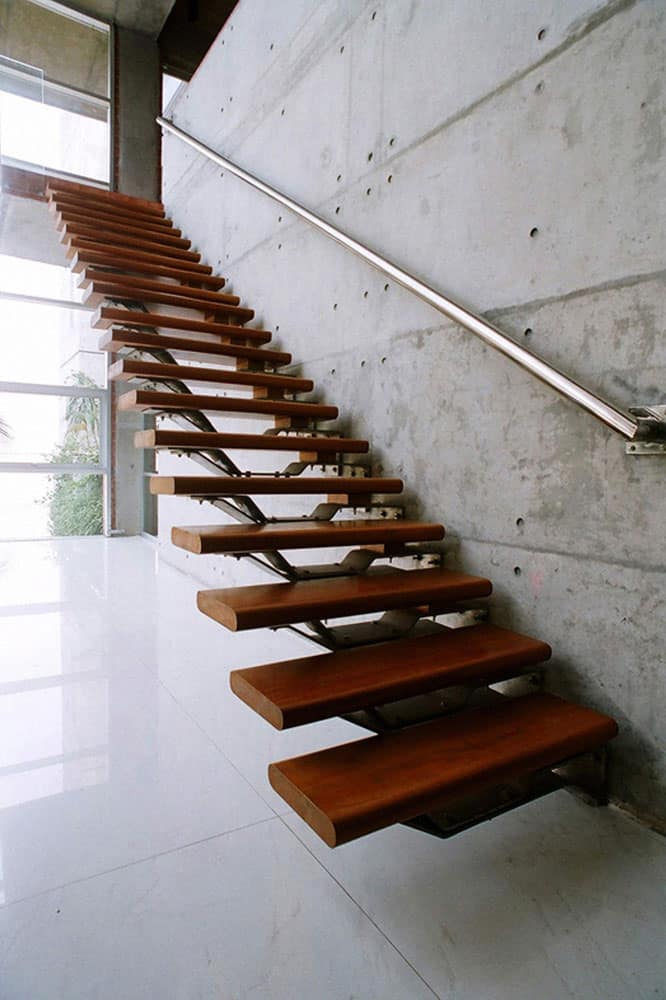 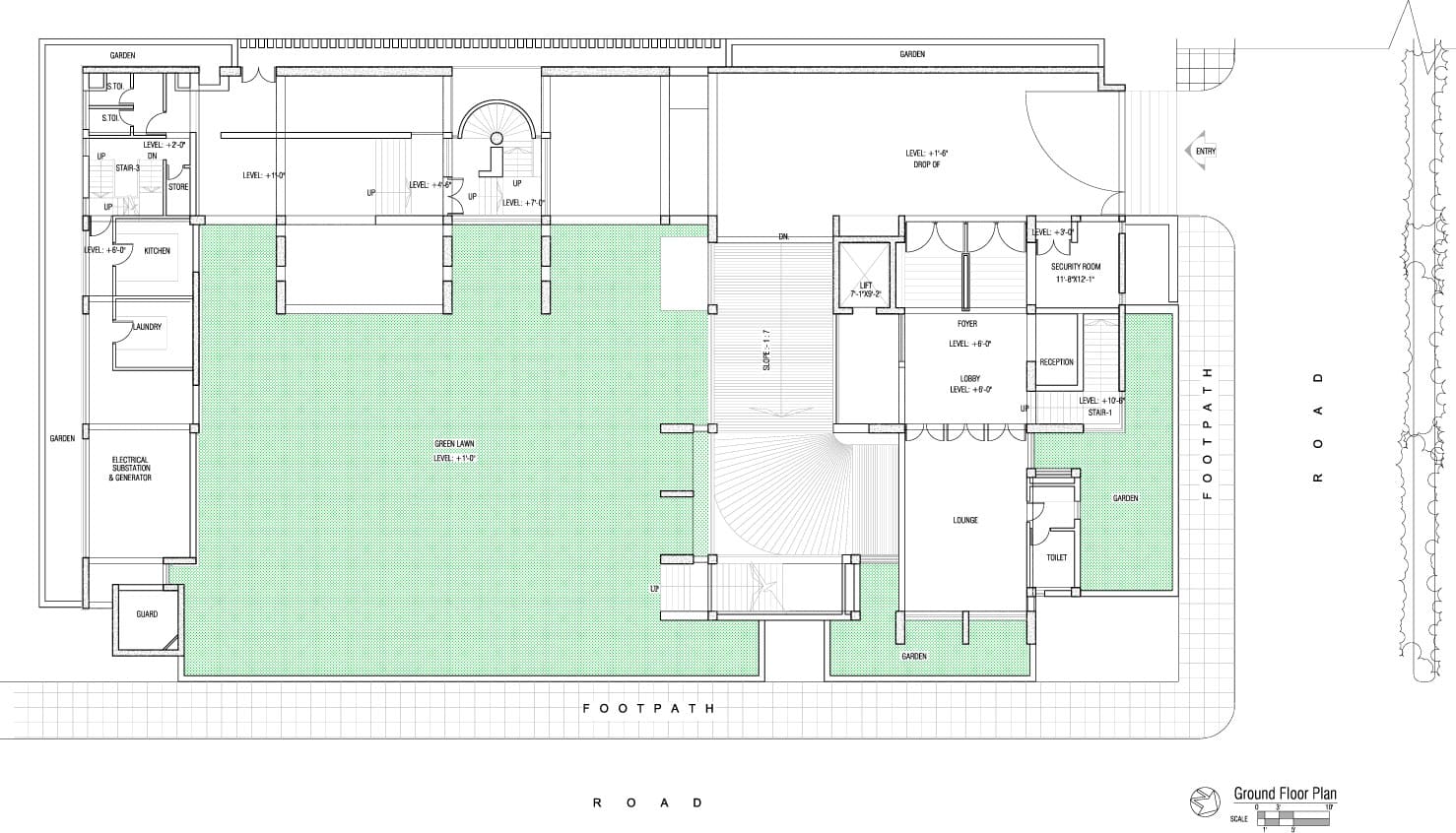 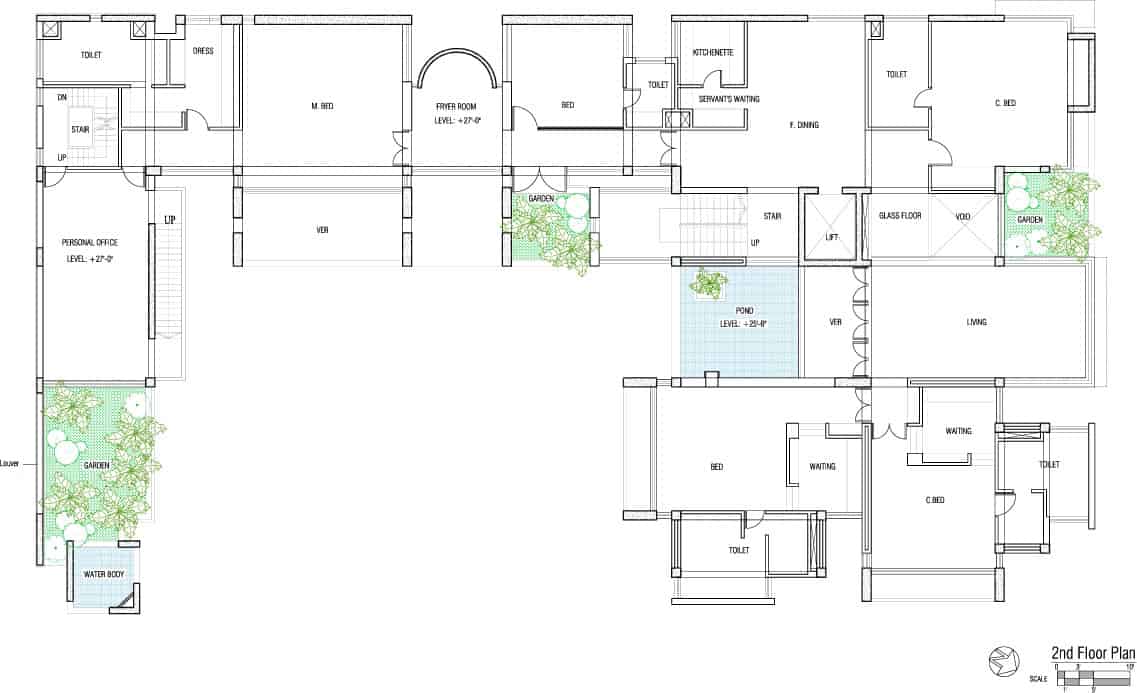 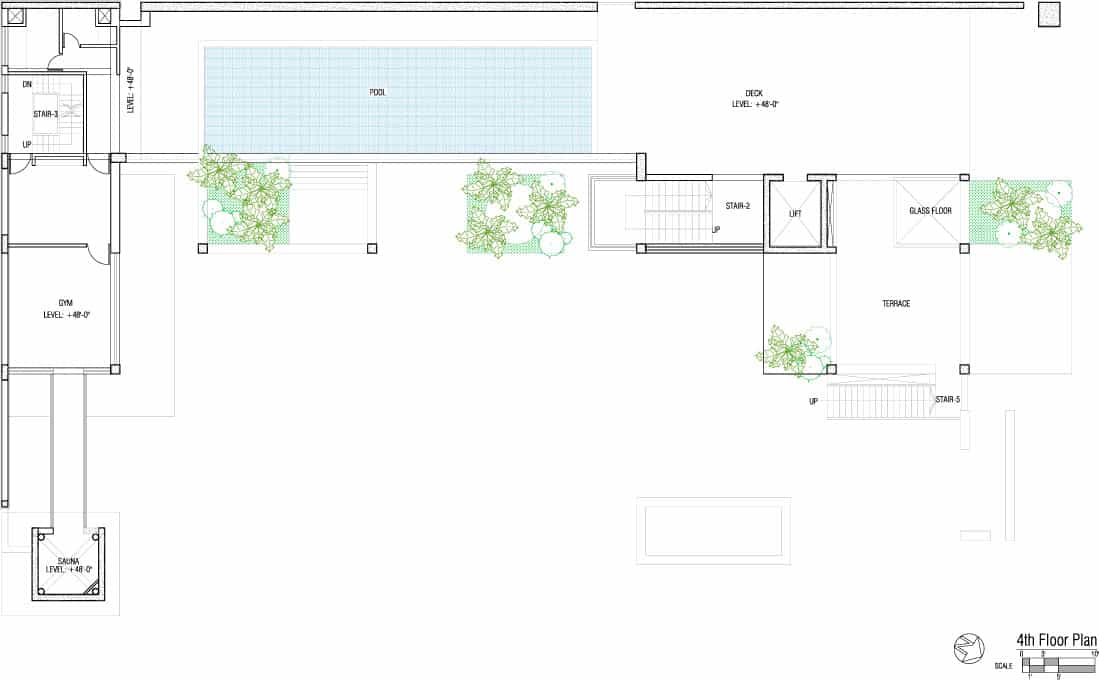 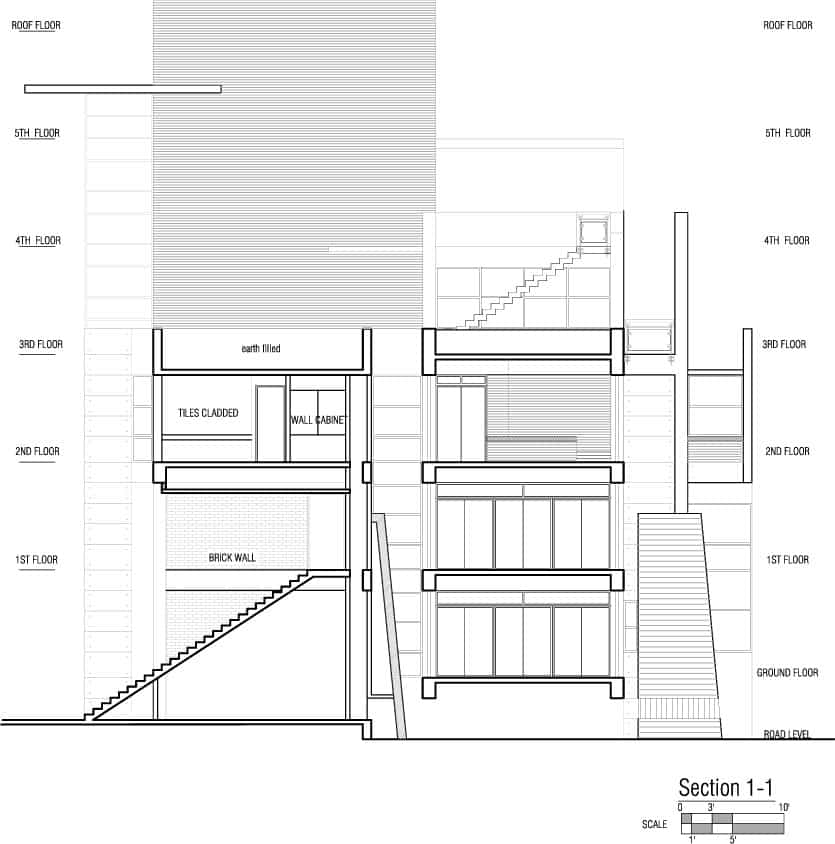 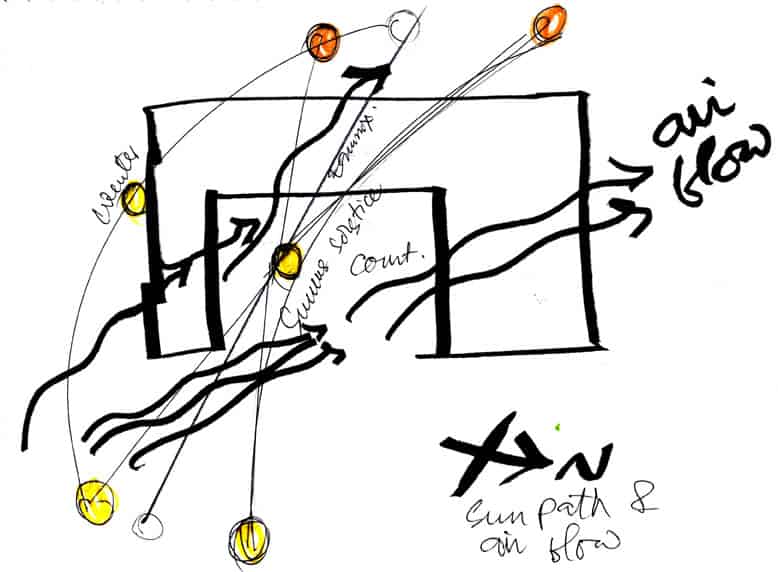 This 20,000 square foot contemporary house is located in Dhanmondi, one of the most densely populated neighbourhoods in Dhaka city, Bangladesh. 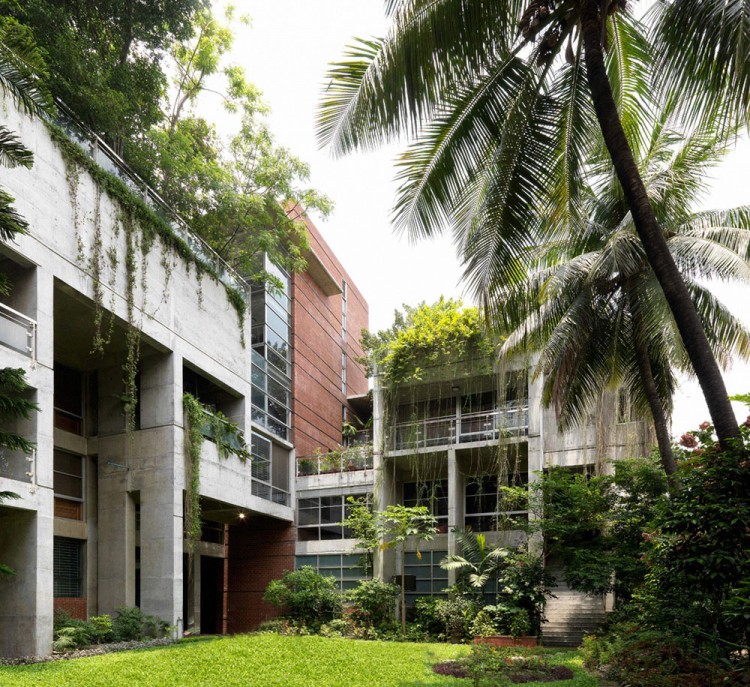 Due to lack of a proper master plan, construction rules and awareness, Dhaka, one of the most densely populated cities in the world has become a city of urban mayhem. Dhaka, having less than five percent green area for a city of more than 400 square miles with a growing population of disparity and persistent difficulties with other utilities, is fast losing its living ambiance.

Dhaka is a densely populated city where most of the single storied residential buildings with open green spaces are fast disappearing and multistoried (six storied) apartment buildings are replacing them.

The Meghna Residence is a single extended family house located at Dhanmondi-a planned residential area of the early sixties. This house has been conceived in three layers — its surrounding context, the climate, the traditional typology.

This is a corner plot connecting roads at the northeast and northwest. The northwest road has median with large mahoganies acting as a screen providing privacy for the house. The house is facing a large open play field and a swimming pool belonging to the women sports federation across the northeast road. On the southeast is a six-storied apartment with a facade having 49 windows peeping over the plot and a two-storied residence on the southwest with potentials of high-rise construction in future.

Dhaka is on the 24.5-degree latitude near the tropics of cancer. Having summer winds from the east, southeast and the south shift towards the southwest carrying monsoon rain approximately 60 inches yearly. The summer solstice does not seem to be critical that starts from the northeast to the vertex at midday to the northwest in the afternoon. But in winter when the sun inclines further towards the south needs careful intervention.

In Bangladesh the courtyard is a traditional typology creating space for living in privacy along with cross ventilation, ample daylight and vegetation.

To create a screen against 49 windows on the southeast particularly for guarding the swimming pool on the 5th level of the house with much privacy and to ensure winter solstice that is critical and summer cross ventilation for the living spaces that is mostly concentrated in the northwest and southwest side of the land was quite a challenge. The effort was further to achieve a traditional living ambience with layers of greeneries and water to achieve a deltaic condition. For this, a “U” shape configuration has been adopted.

Also a “stacking” design in different floors has been adopted to provide much space on the ground and other levels. The part-semi basement along with most of the ground level has been allocated for service provisions i. e. water treatment plant, pressure vessel system, power generation, parking and lift lounge etc. The second level for the formal spaces such as formal living and dining, guest lodge, client’s home office and the main kitchen and the third level is especially for private family spaces i. e. all bedrooms, lounges, dining, library, water bodies and the gardens. The forth level used for the swimming pond tray and other electro mechanical support facilities. The fifth level contains sauna, gymnasium, partly covered swimming pond, deck along with traditional “GHAT” and an adjacent large garden. In addition the swimming pond provides a beautiful view of the green field with large trees caught by the sight afar.

The use of exposed concrete both inside and outside in major walls along with exposed brick initially made my family a bit skeptical and uncomfortable in terms of its mat and raw look of the house. But my architect explained to us the appropriateness of the approach considering the ease of maintenance and the climate of Bangladesh. He also tried hard to make us imagine the house transforming gradually with the growing green that he kept in different levels.

Now after more than a year living in this house, I can see what he meant. Now I enjoy the privacy, movement of air and light, sound of water and obviously the warily messy bouncing green. If I need to be very specific then I will talk about the fourth level music room (gosha ghar) surrounded by the terraces and the gardens attached to the upper level swimming pool, large tree area and the deck by a open to sky stair, I like the fluidity. After my daylong exertion when I come back home and sit relaxed or stroll down this calm and quiet area in the midst of chaotic and noisy Dhaka, I become nostalgic to my early days in village and I love it.