Geneva-based studio Lacroix Chessex has sent us photos of the Villa Sabatini project.

Completed in 2009, this 4,628 square foot three story home is located in Saint-Sulpice, a city in the canton of Vaud, Switzerland. 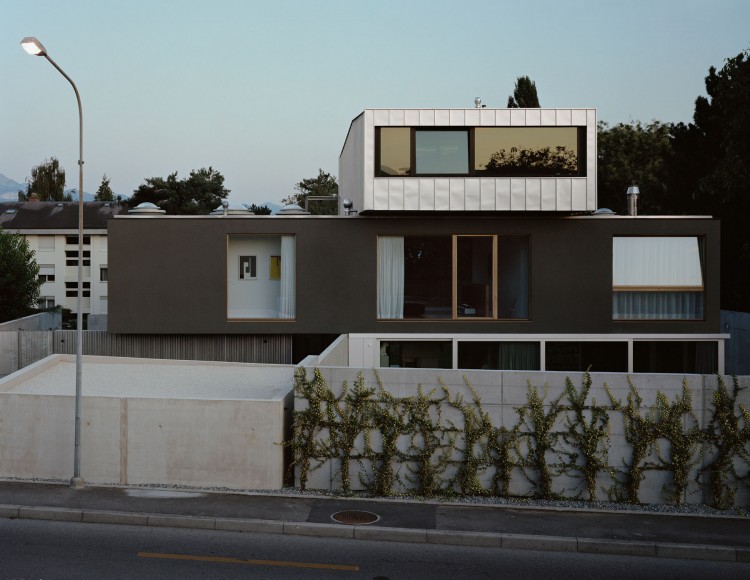 “A single family residence for young clients, lovers of design and contemporary art, who did not want a ‘minimalist’ house in the sense of an architecture frozen in a showroom-like tidiness as found in magazines. The simplicity of the architectural form should not constrict the richness of the living scenarios to be put into shape.

They had lived in New York and were fond of its urban patchwork. They also had a taste for the Californian architecture of the 50s and 60s and the Case Study Houses. In this minimalist architecture, the liberal association of contrasting materials – from the rawest to the most abstract -, the creativity of built systems left apparent, the participation of the exterior to the interior and, the spatial variety of these experimental houses, became the favoured area of architectural research.

The site, a slightly sloping plot of 1,500 m2, offered little in terms of view from the lower levels, despite its exceptional situation only 300 m from Lake Geneva. The rather ordinary surroundings of an hybrid peri-urban neighbourhood, typical of Swiss cities, are put aside in search of a different place, in the chosen architectural experimentation.

An earthy rough-cast box is lifted from the ground and cut to reveal its white interior. It is (un)balanced on a concrete swimming pool, a brick fireplace and the wrapped walls of the ground floor. Beneath it, a travertine floor runs across the garden and folds up against the sides of the plot.

It stretches the interior space to the limit of the property, between a terrace, an outdoor patio, the pool and, its decks. Above it, a lived-in stainless steel roof, the master bedroom, reaches above the trees for views on the lake and the Alps. The parts are juxtaposed, allowing to move freely from one world to the next; an assemblage.”

Villa in Génolier by LRS Architectes

Burkehill Residence by Craig Chevalier and Raven Inside Interior Design