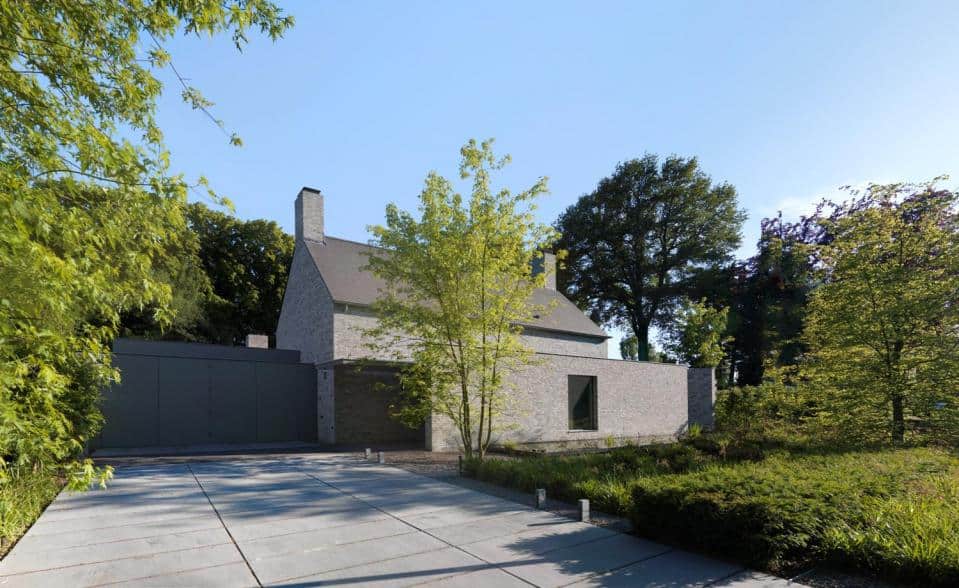 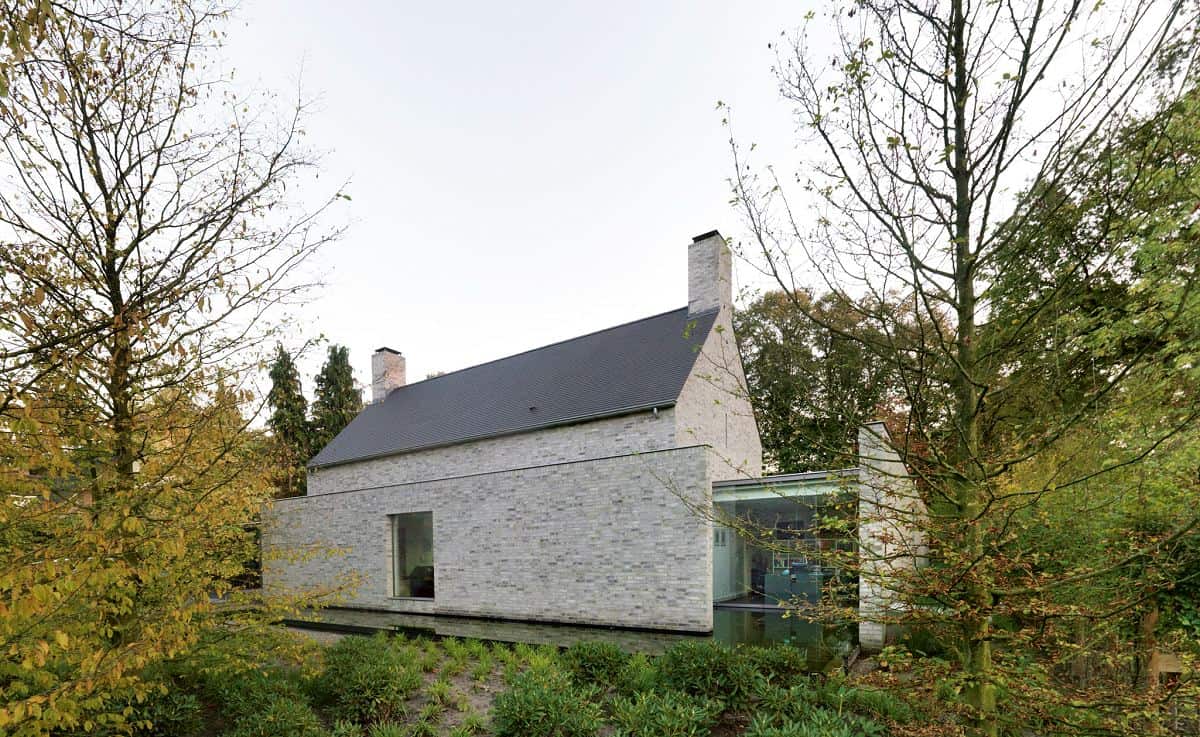 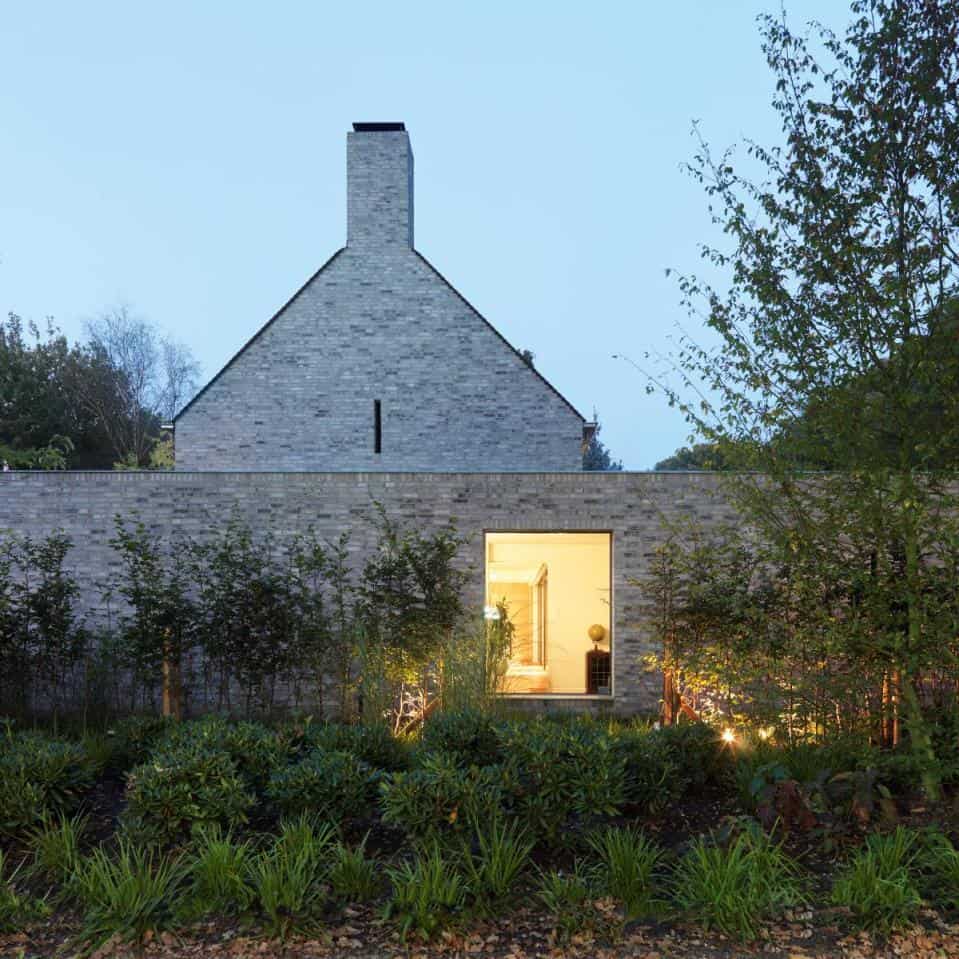 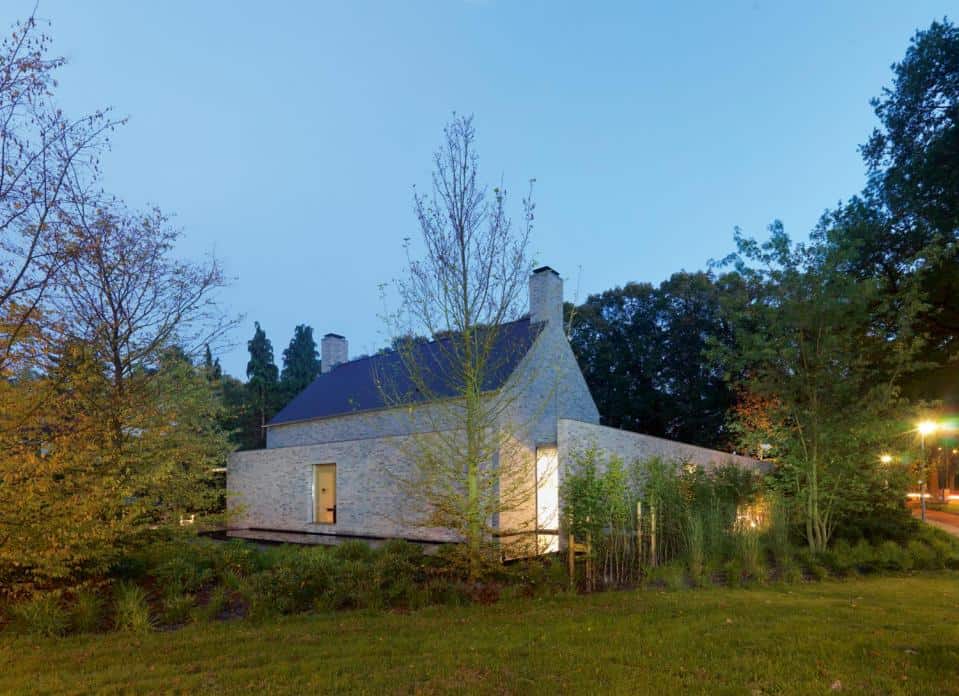 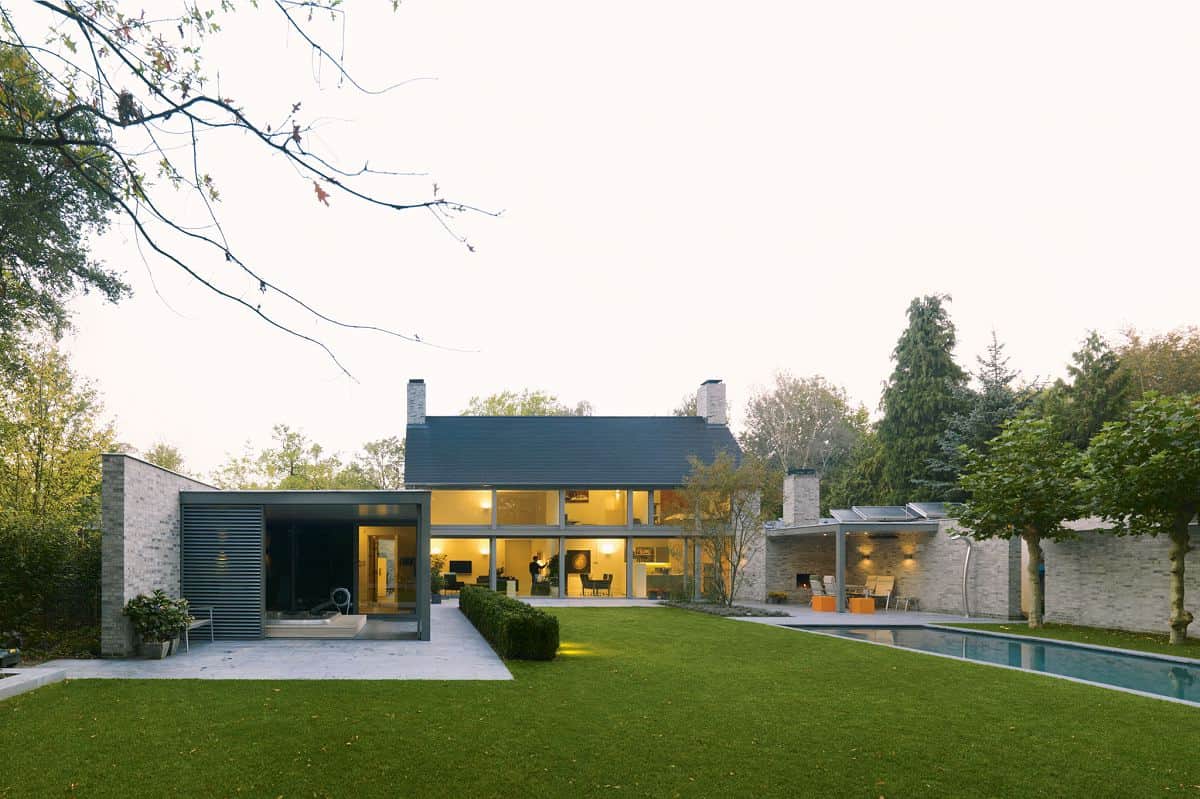 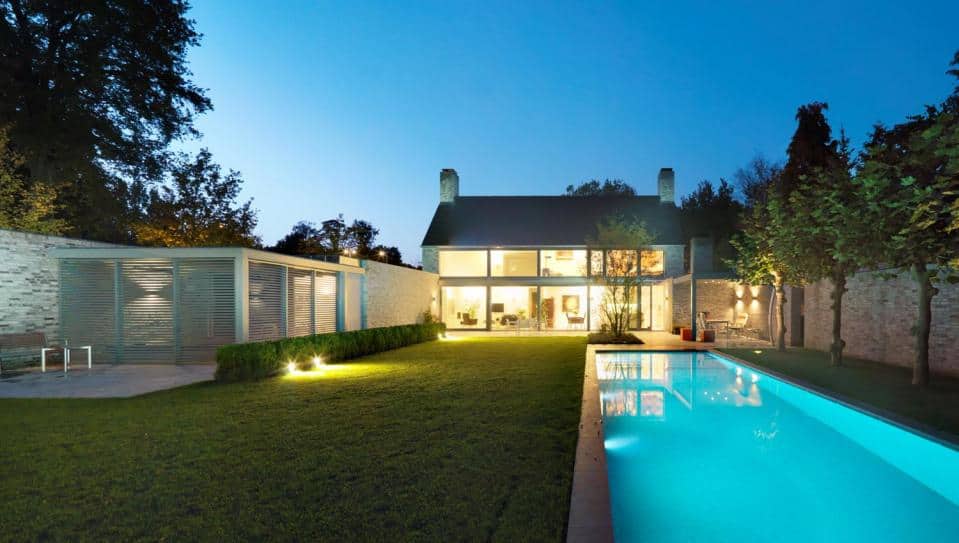 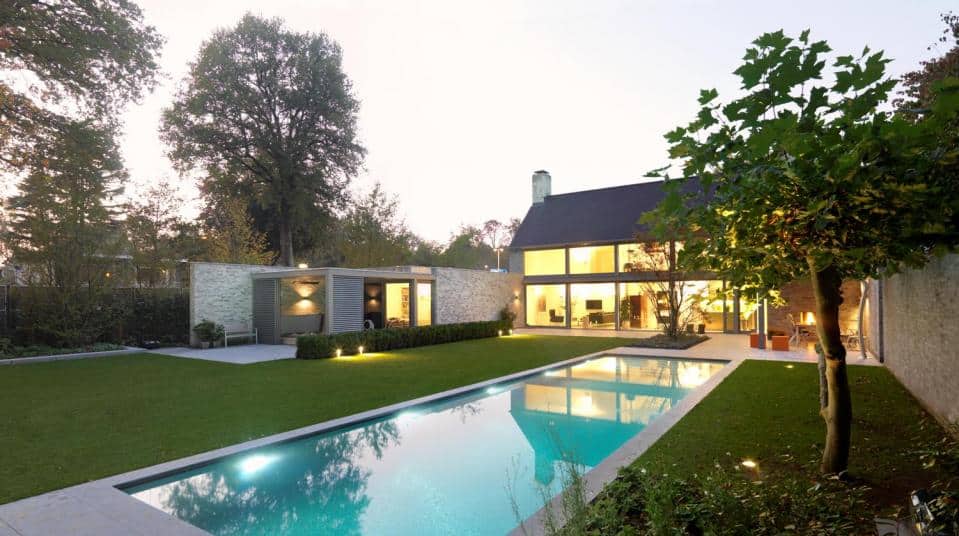 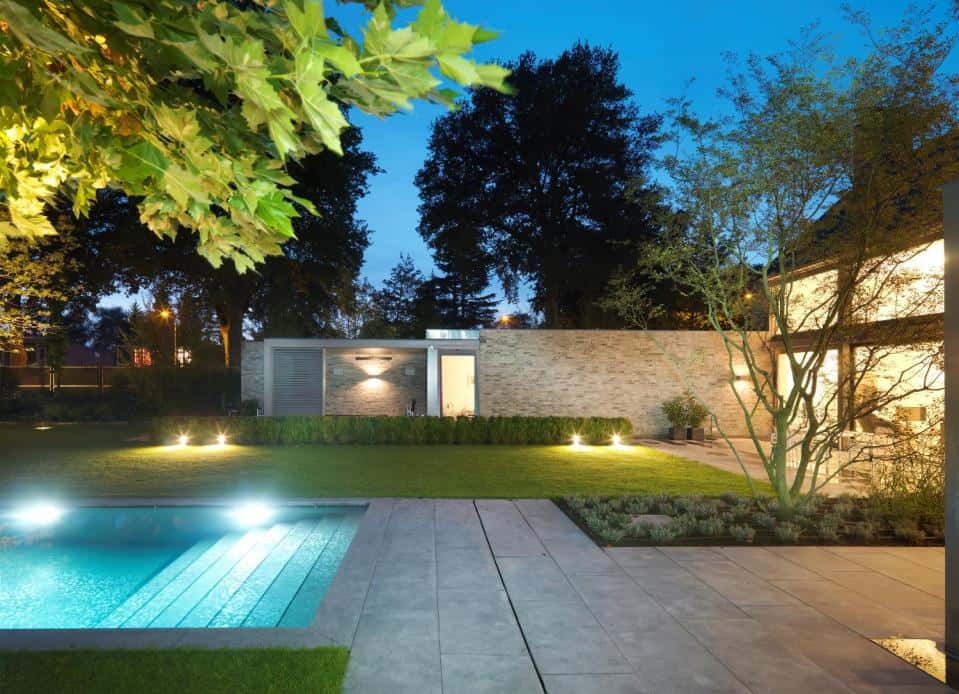 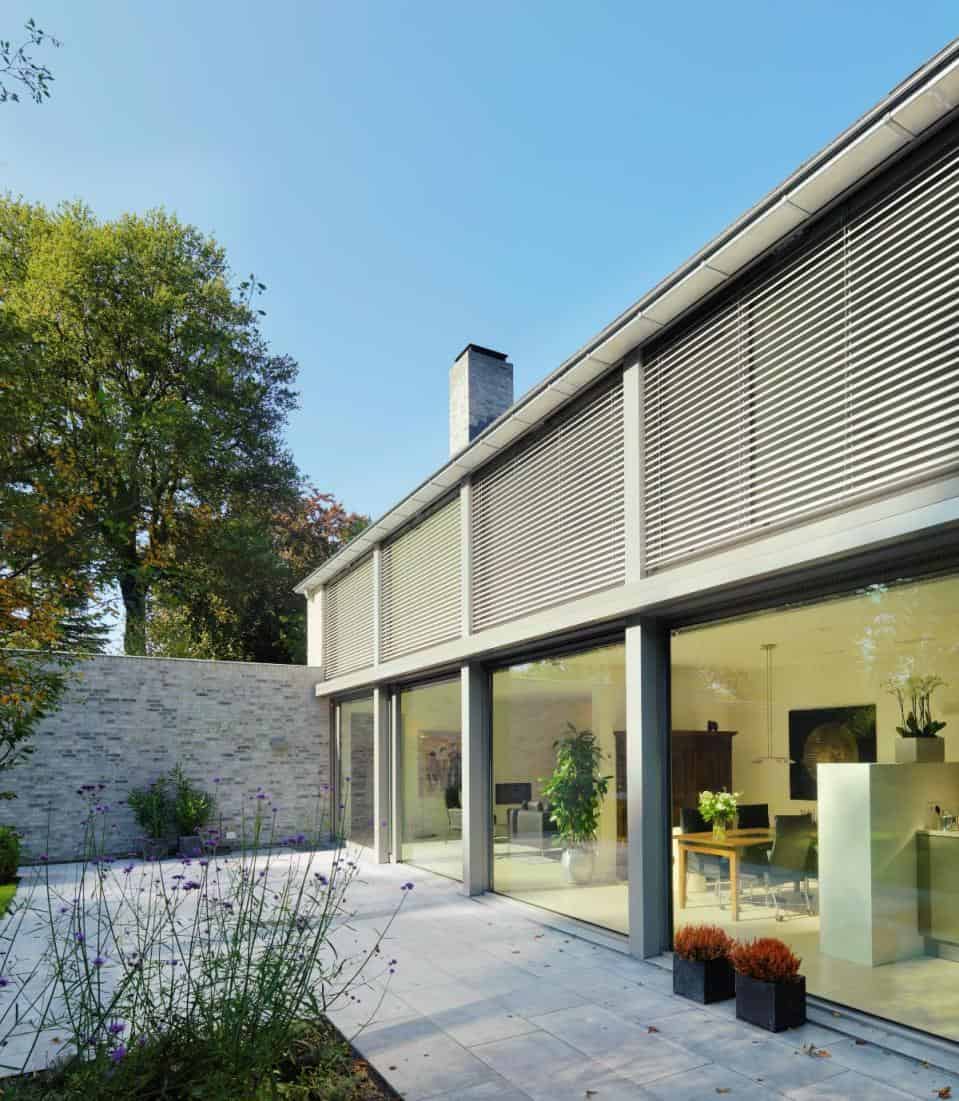 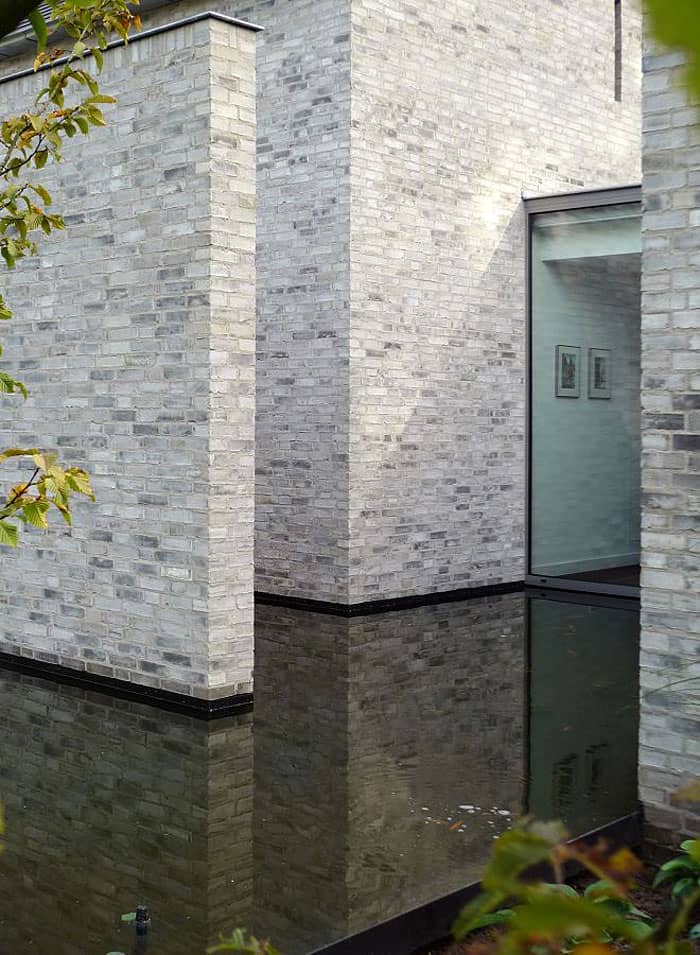 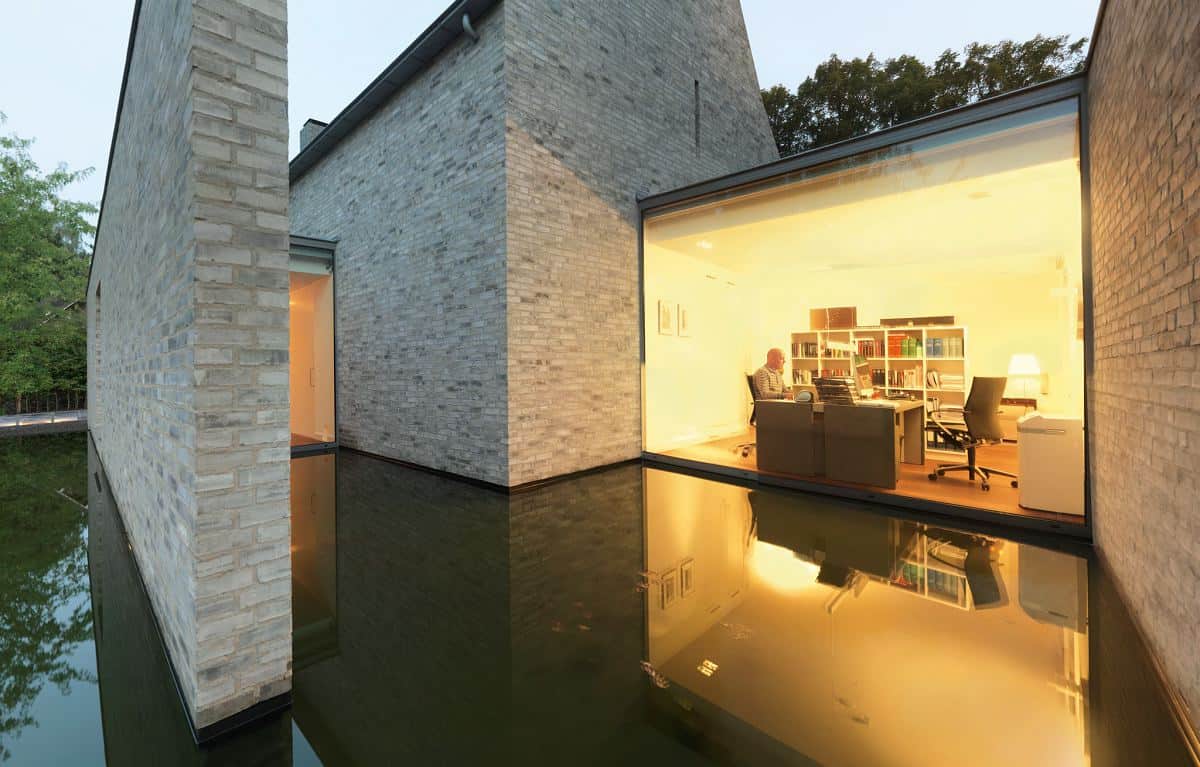 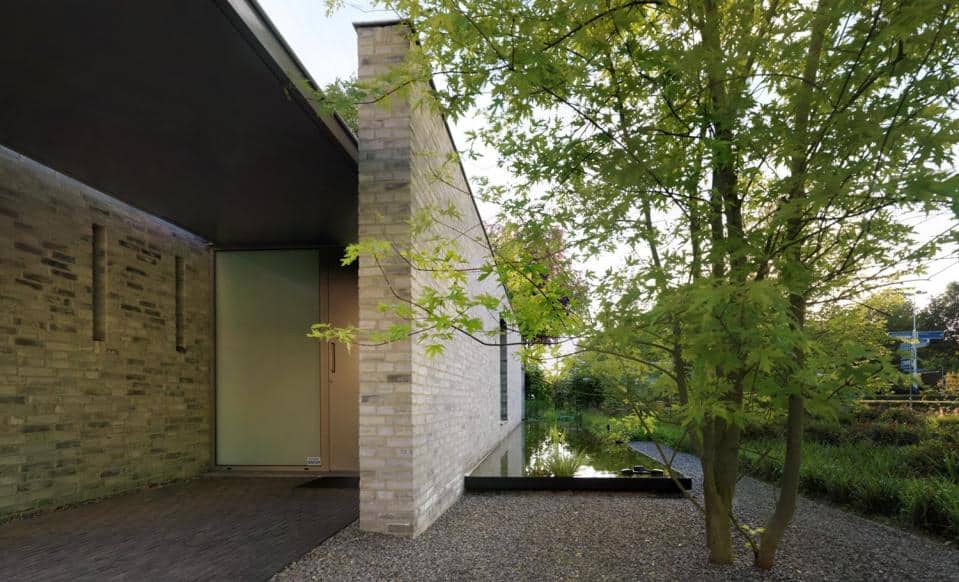 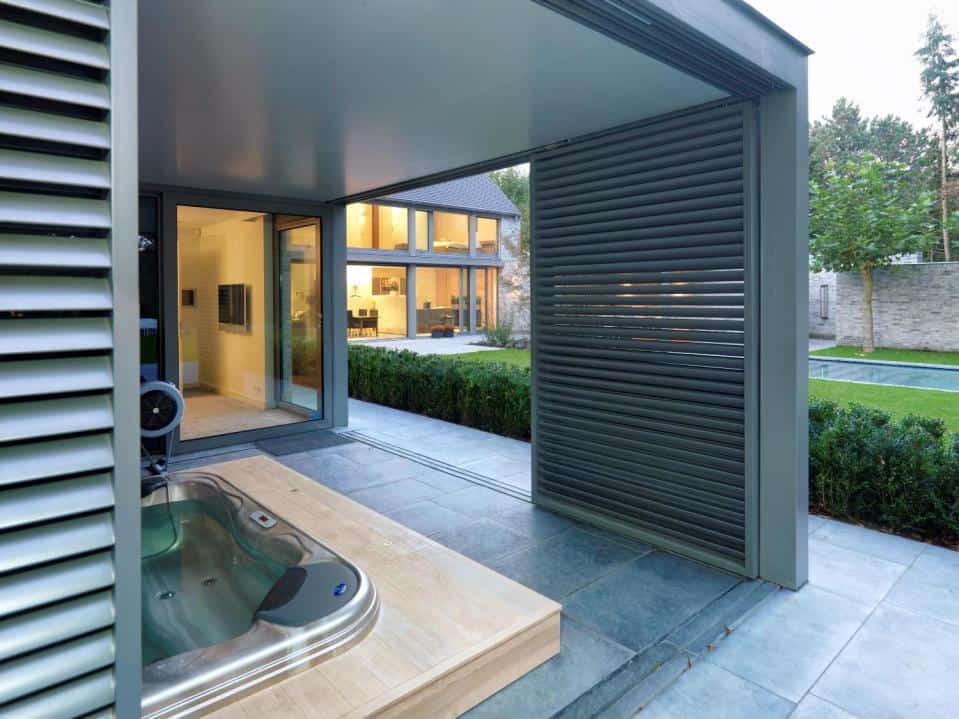 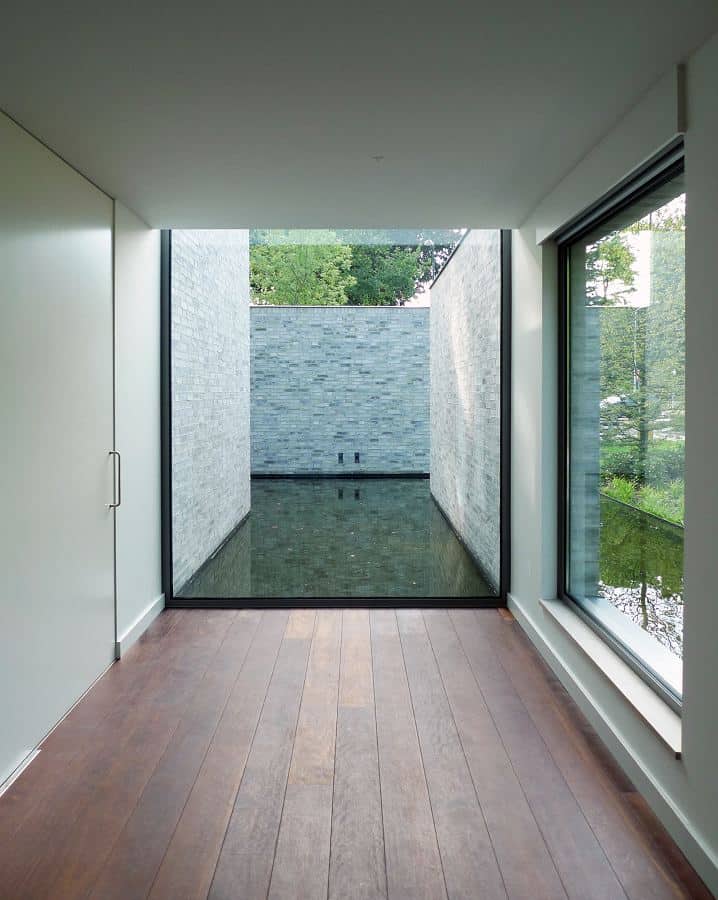 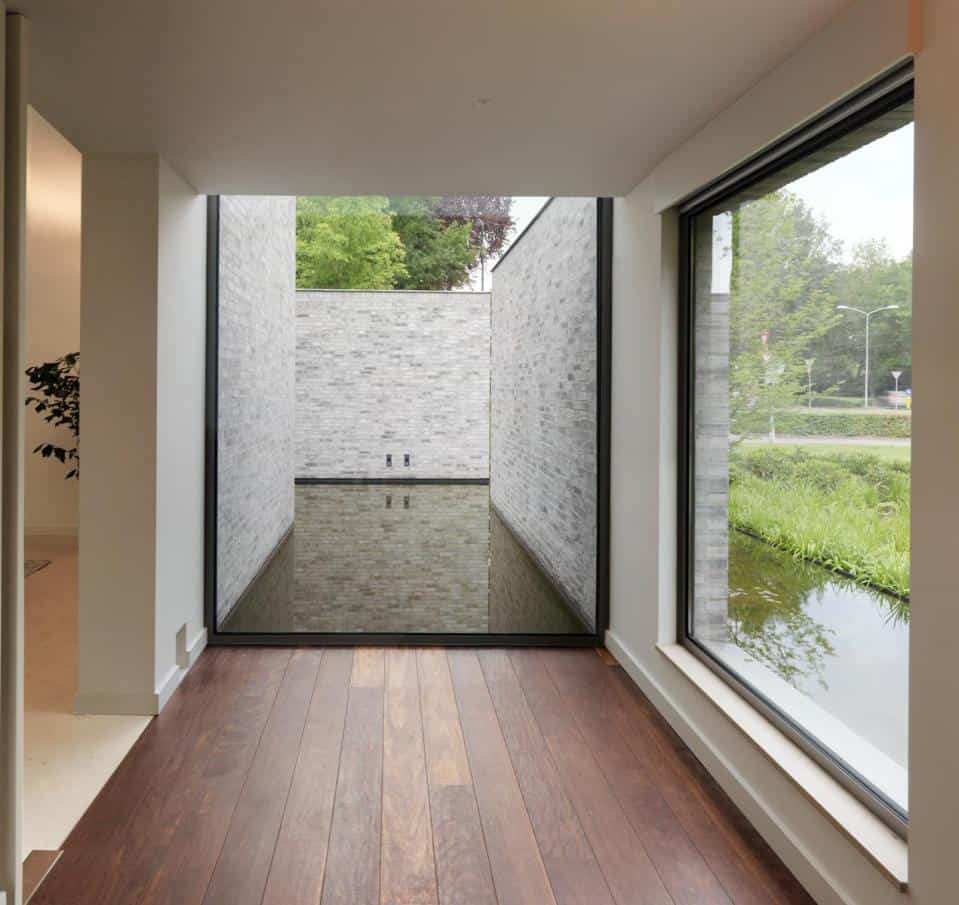 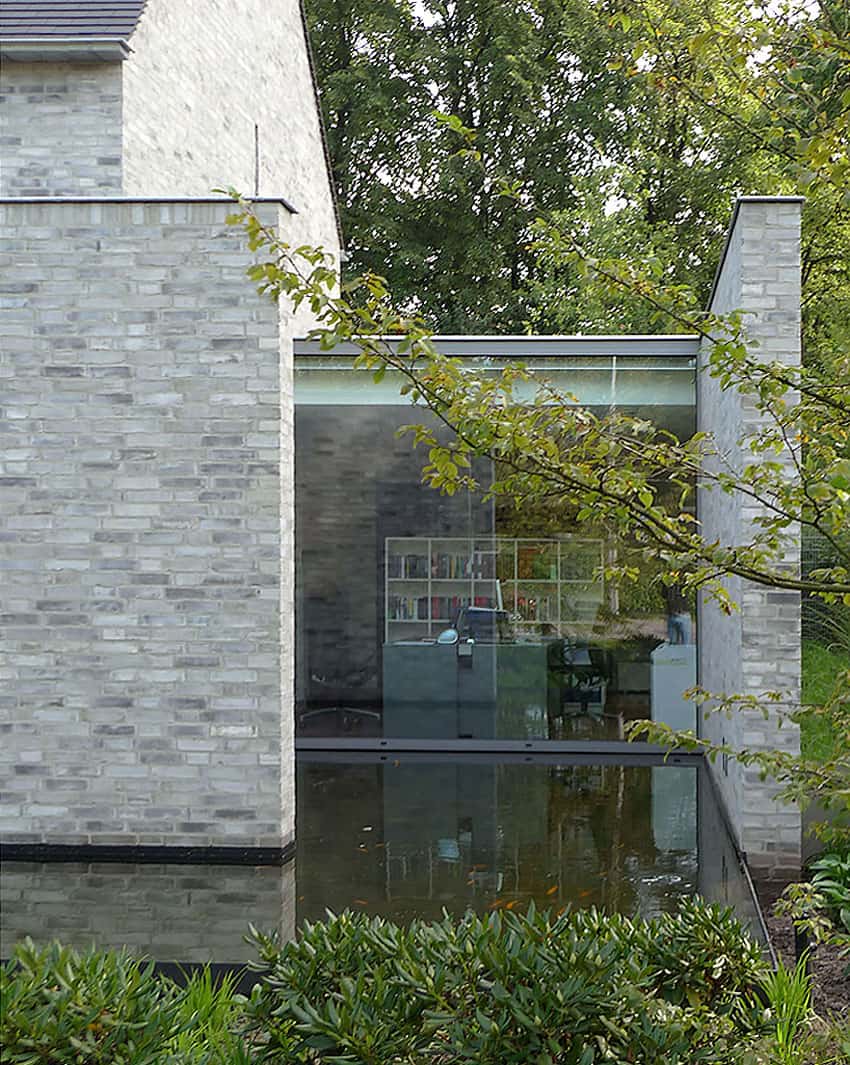 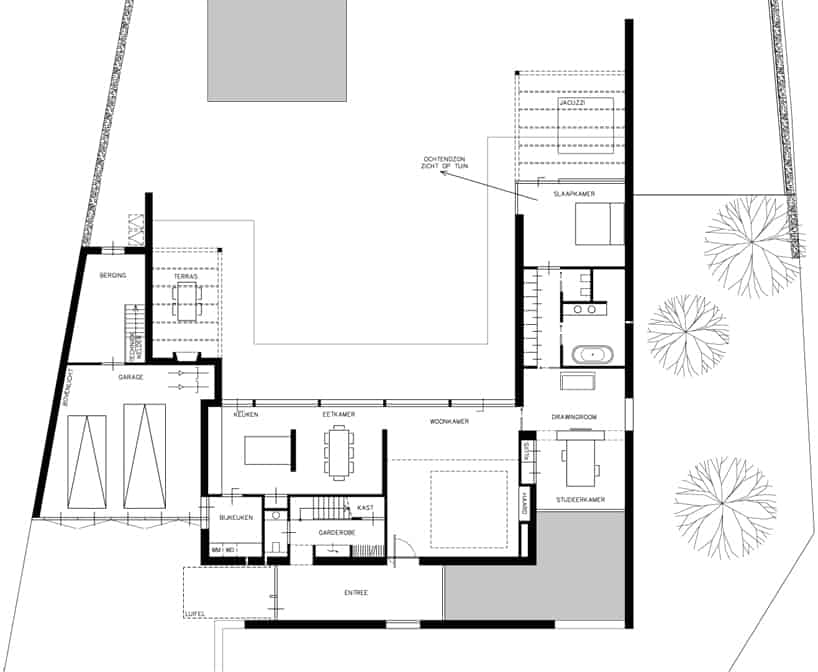 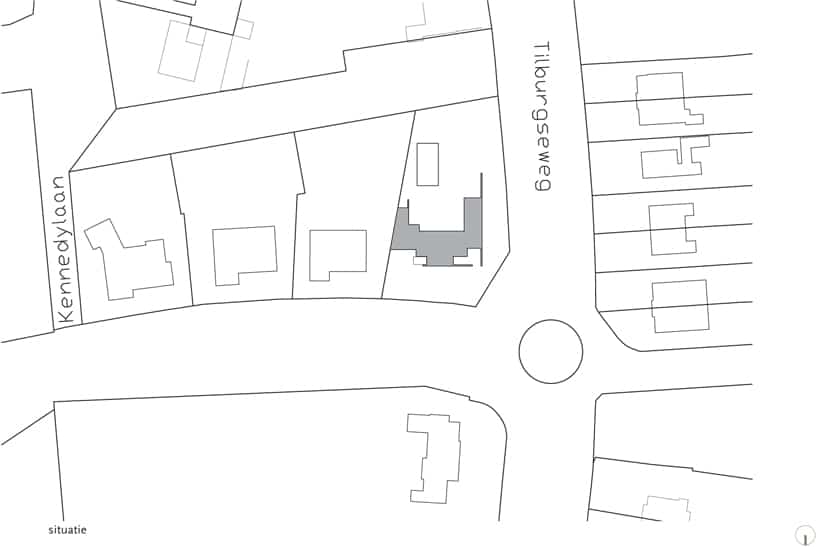 Completed in 2010, this 2,368 square foot two-story residence is located in Goirle, a town in the southern Netherlands, in the province of North Brabant.

“A remarkable fusion of contemporary traditionalism and artisanal modernism

The swimming pool, sauna, and hot tub are clear signs of luxury in this residence in Goirle, a municipality in the vicinity of the city of Tilburg, in the south of the Netherlands. But the comfort of this house is not only offered by these luxurious amenities, but primarily by its architecture.

Villa Rotonda was designed by the young architects Pieter and Thomas Bedaux, who are continuing the tradition of the bureau in Goirle which was started in the 1930s by their grandfather Jos Bedaux and taken over by their father Peer Bedaux. Since the 1950s, the bureau has been focusing on two streams: a contemporary traditionalism and an artisanal modernism. In both areas, security and comfort play a large part. From that point of view, the traditional houses with their pitched roofs and shuttered windows are not so different from the quiet, abstract architecture which the bureau has also been making for years. The residence in Goirle combines both directions.

From the street the house looks traditional and closed, from the garden it reveals itself as an open and modern space. The traditional look was dictated by the zoning plan, which specified a roof which would allow the new building to fit in with the rural atmosphere of Goirle – an atmosphere, incidentally, which has been determined to a significant extent by the work of the grandfather and father Bedaux. Except for two large windows, the house is closed off to the main street, protecting the residents from the noise pollution caused by the traffic from the nearby busy roundabout. This also explains the name of the house, Villa Rotonda. Rather than a reference to Andrea Palladio’s famous villa near Vicenza, Italy, it is an ironic commentary on the house’s location next to a roundabout intersection. The water partially surrounding the house reinforces its private, sealed off character.

On the street side, the house appears to be a variation on the archetypal Dutch residence, with a pitched slate roof and grey brick walls. On the garden side, that idea is toppled, and the atmosphere changes. The southern side of the house looks out onto the deep garden. Here, the façade is nearly completely transparent. The Reynaers sliding system CP 155-LS was usedfor the façades and can be operated automatically. This allows the living room-kitchen to be opened onto the garden so that indoors and outdoors form a continuous whole. The tilt-and-turn windows, made using CS 68-HV (hidden vent), can also be operated automatically.

The decision to use the minimalist variant of CS 68 with hidden vents emphasizes the abstract look of this house with its understated design, in which the appearance of simplicity is not only seen in the windows. This returns in the abstract detailing of the point where the wall meets the roof. The automatically operated sliding doors and windows are part of an impressive array of home electronics which serve to further increase the comfort level already inherent in the architecture itself.

Almost every room in the house faces the large garden. With the closed-off street-side façade guarding the rear of the house, it is possible to enjoy both utter privacy and light, open living. As such, with the design of the house, the two young architects have achieved an optimal combination of two worlds, modern and traditional, thereby proving that they are worthy of following in the footsteps of their predecessors in the office.”