This two story contemporary residence is located in Madrid, Spain. 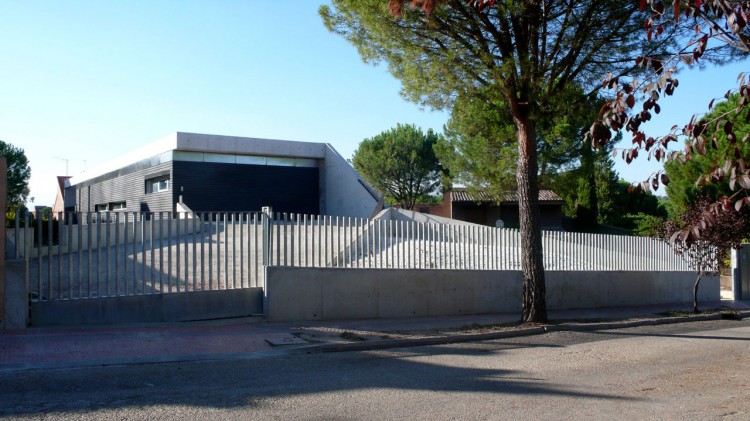 “Built into a slope, the project is a two-story house with distinct entrances on each floor. The property is developed as a narrow longitudinal scheme to make the most of the garden plot. The volume arises from the main street of the merger of the two branches of access and it develops as a concrete materialization in the first floor, which rises to close the volume weightless cantilever.

This house is perhaps the most expressive done by ALT arquitectura. They designed the house with huge concrete surfaces flying over the ground, without giving too many clues of structural performance. We were looking for a non-logical structure to provide spaces with something magical.

The volume setting has been designed to deceive the intuitive structural sense that tells us why things do not fall. Contemplating large and heavy volumes of concrete without knowing where they hold creates an odd and pleasant sensation. The heavy becomes light. The large glass skylight manages to create the feeling of being outside, and increase the lightness of the staircase. They used calibrated round20mm, and end result has a surprising rigidity. IPE200 beams that support the treads hanging were bolted to the concrete by a plate dimension of the head of the beam.

The space changes with movement and with the variable interaction of sunlight. The house is composed of overlapping spatial concepts. Some are more three-dimensional, others are more bi-dimensional, and everything is woven by one-dimensional vertical rods of the ladder.

The material that creates the main enclosure is concrete. What is not concrete, or fluted metal is polished stainless steel. The windows are aluminum finished steel. They selected a special profile of straight angles. The architects intention is that nature is reflected in the skin of the building, accentuating the flight of the large volume of concrete.”

House V by I + GC [arquitectura]

A Tree in a Living Room! Corallo House by Paz Arquitectura

House In Moreira by Phyd Arquitectura