São Paulo-based studio Isay Weinfeld has sent us photos of the Santa Amaro house, a project completed in 2009.

This 13,712 square foot two-story residence is located in a quiet residential area in São Paulo, Brazil. 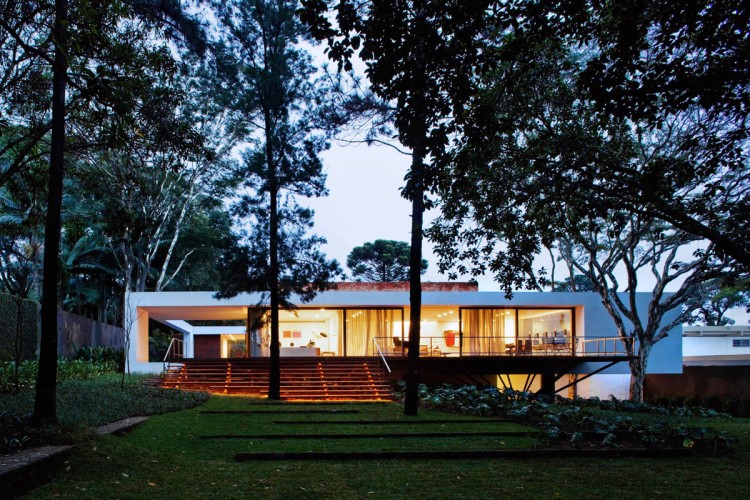 “Santo Amaro House was designed for a mature couple with grown-up children that no longer live in the house. It was built in quiet residential area in São Paulo, Brazil.

The homemaker is an amateur piano player who enjoys gathering friends at home for intimate musical recitals. For that purpose, a wide room with high ceilings was designed to accommodate three Steinway pianos – including a concert-grand piano -, spacious enough for small musical ensembles, such as, for instance, duos, trios or quartets. That environment also features a winter garden receiving natural lighting through a glass roof.

The living room and dining room are separated by a low screen, and a sliding door separates the living area from the den, thus allowing the husband to read or watch a film without disturbing his wife during piano lessons.

A deck that externally surrounds the living and dining rooms and extends along the swimming pool can also be reached directly from the main bedroom.

Service areas – garage, deposits, employees’ quarters, laundry, etc – were all set up on the ground floor.