The architects have refurbished and extended a now 689 square foot one bedroom, one bath cottage located in Dalkey, a suburb of Dublin and seaside resort in Dun Laoghaire-Rathdown County, Ireland. 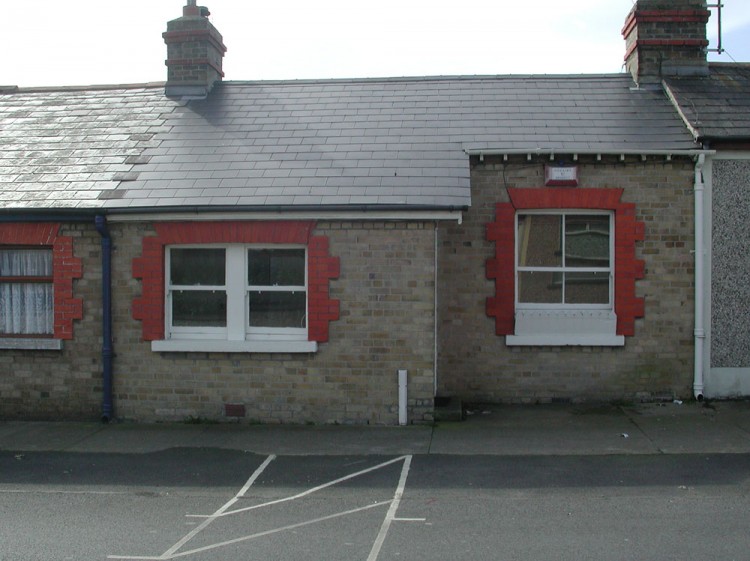 “Originally No. 31 Carysfort Road was a mid-terrace, one bedroom dwelling, with a single storey rear return and small back garden.

Our brief was to refurbish the existing dwelling and improve the connection between living areas and the limited external space, while providing as much extra floor space as possible.

The tight site conditions along with the strict planning constraints quickly defined the parameters within which we could work, but also began to suggest the basic form and shape of the new rear extension. This new structure was conceived as a simple form which connected at ground floor level with the rear of the main house. It’s ground floor rear elevation is completely open to provide a full height glazed connection to the rear courtyard while a similar opening is provided at high level to allow south light to penetrate deep into the building plan over the adjoining roof scape. In front of this high level clerestory a small office or study area has been provided on the mezzanine, looking down into the new living area below.

In order to ensure the new structure to the rear would not be visible over the ridge lines of adjoining structures, the rear extension has been partially sunk into the ground resulting in a complexity of form and volume both internally & externally. Externally this new structure is formed by a fair-faced concrete shell and a negative joint or external ‘shadow gap’ has been provided around its sides and base, helping it to hover over the rear courtyard and assert its own unique status within the surrounding context.

A single door provides access to the rear courtyard which has been given a glazed external finish, sitting flush with the adjoining fixed, frameless glazing section. Internally, a black terrazzo floor has been used throughout, set against white walls, ceilings and recessed, flush finishing units. The front bathroom walls are clad entirely with full height honed basalt stone slabs. The rear courtyard has been finished with simple white gravel and contains a fair-faced concrete deck/dog kennel and a mature olive tree.”

Urban Art: Before I Die… In Nola by Candy Chang