Completed in 2010, the two contemporary residences are located in the village of Goeblange, in southern Luxembourg. 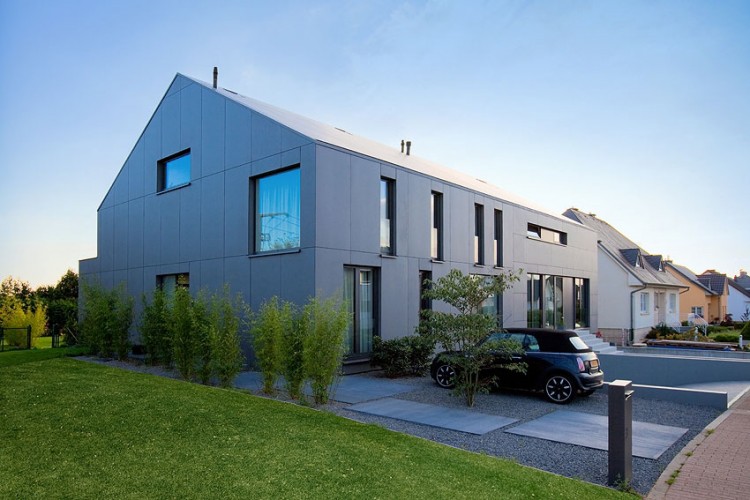 “The circulation space and they way the house has been divided is characterized by the glass slab on the first floor. It helps to penetrate the overhead light from skylights down to the entrance in the ground floor. Thus the disadvantage of an unfavorable luminosity due to the significant depth of 15m construction is removed.

The house is flooded with these skylights that are beaming from underneath in the evening and consequently avoids the use of prominent luminaries. A large glass aperture (10x3m) characterizes the interest brought to the outside light and landscape and tries to remove the physical boundaries of the house. The proximity and the orientation of the dock of water reflects the rays of sun onto the walls and ceiling of the central space, which is commonly used throughout the day.

The construction regulations, impose a double pitched roof, was the source of reflexion for the fifth façade; the roof deck. The idea to cover the façade with the same fiber-cement panels that reinforces the monolithic façade of the house and also raises the question of the relevance of a pitched roof that is too often imposed by the irregular construction regulations. The same treatment reduces or even erases the boundaries between the vertical surface (façade) and the inclined surface (roof).

The complex construction is based on a traditional frame with rafters and sheathing and a metal construction that is used to attach the fiber cement roofing panels. Putting aside the architectural and aesthetic considerations, we can reveal a non-negotiable advantage, due to the considerable height of the formation. It will present a kind of plenum that in summer is generously vented thus avoiding overheating of the structure and habitable rooms in the attic.”

One Comment to Two Row Houses in Goeblange by Metaform