Los Angeles-based studio Shimizu and Coggeshall Architects has remodeled and extended the 25th Street Residence, a 1920’s house that was in need of improvements and redesign. 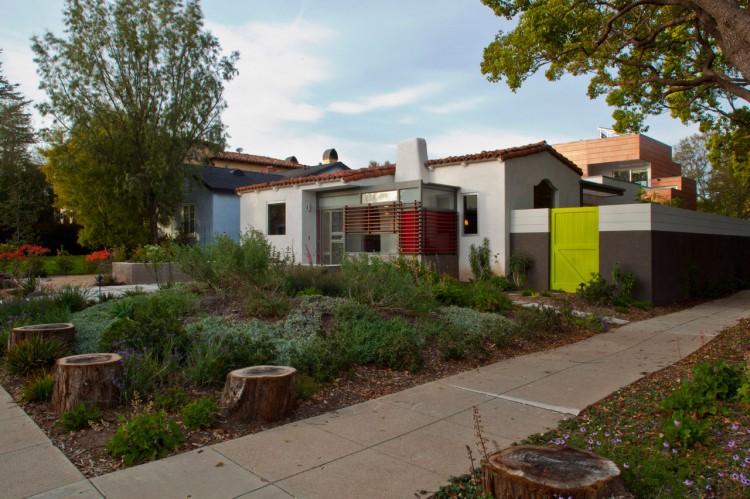 “The project hinges on five main ideas: the first was to insert a 21st century addition into a 1920’s structure in a way that would contrast and complement. Secondly, we had a strategy of reconfiguring small unused spaces, expanding space to handle a multiplicity of programs.

Then we set up connections and scenarios with the exterior, where every space has a unique relationship to the outside, sometimes framing a view, sometimes blurring the boundary between inside and out. The sustainable issues for this project were a mixture of passive and contemporary technologies such as hydronic radiators that are fed by solar pre-heated water, rainwater harvesting, edible landscapes, cool roof, LED floods, phase changing drywall, and photovoltaics.

Simultaneously there was a material agenda that not only contrasted new from old but also lined existing spaces in order to define separate programs. Materials were re-used on site: beams became benches + counters became fountains. Salvaged walnut slabs became a counter and framing harvested from a demolished factory in Vernon became the living room floor.

The result is a high-performing home that has been completely transformed while respecting the layered history of the house.”