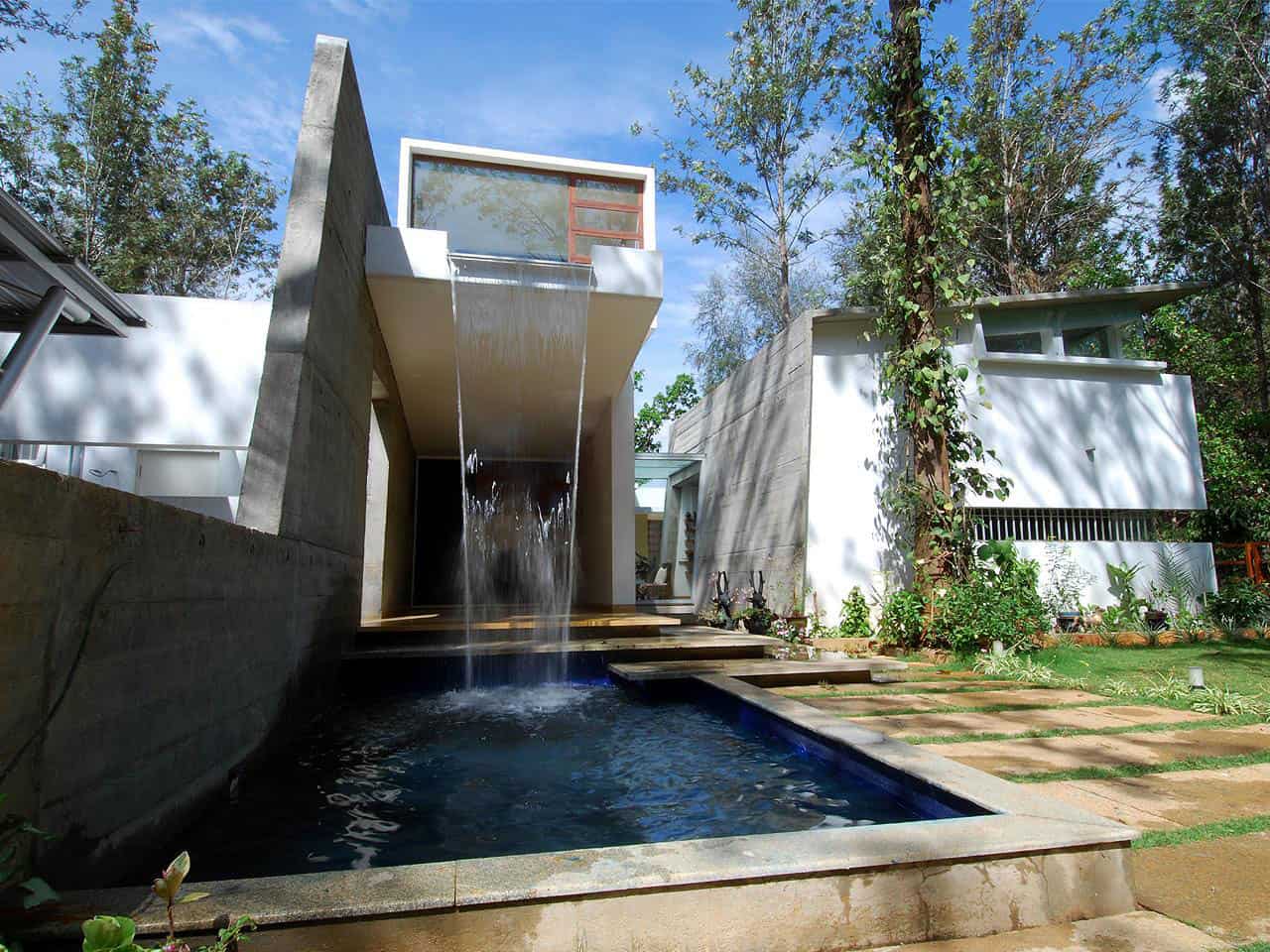 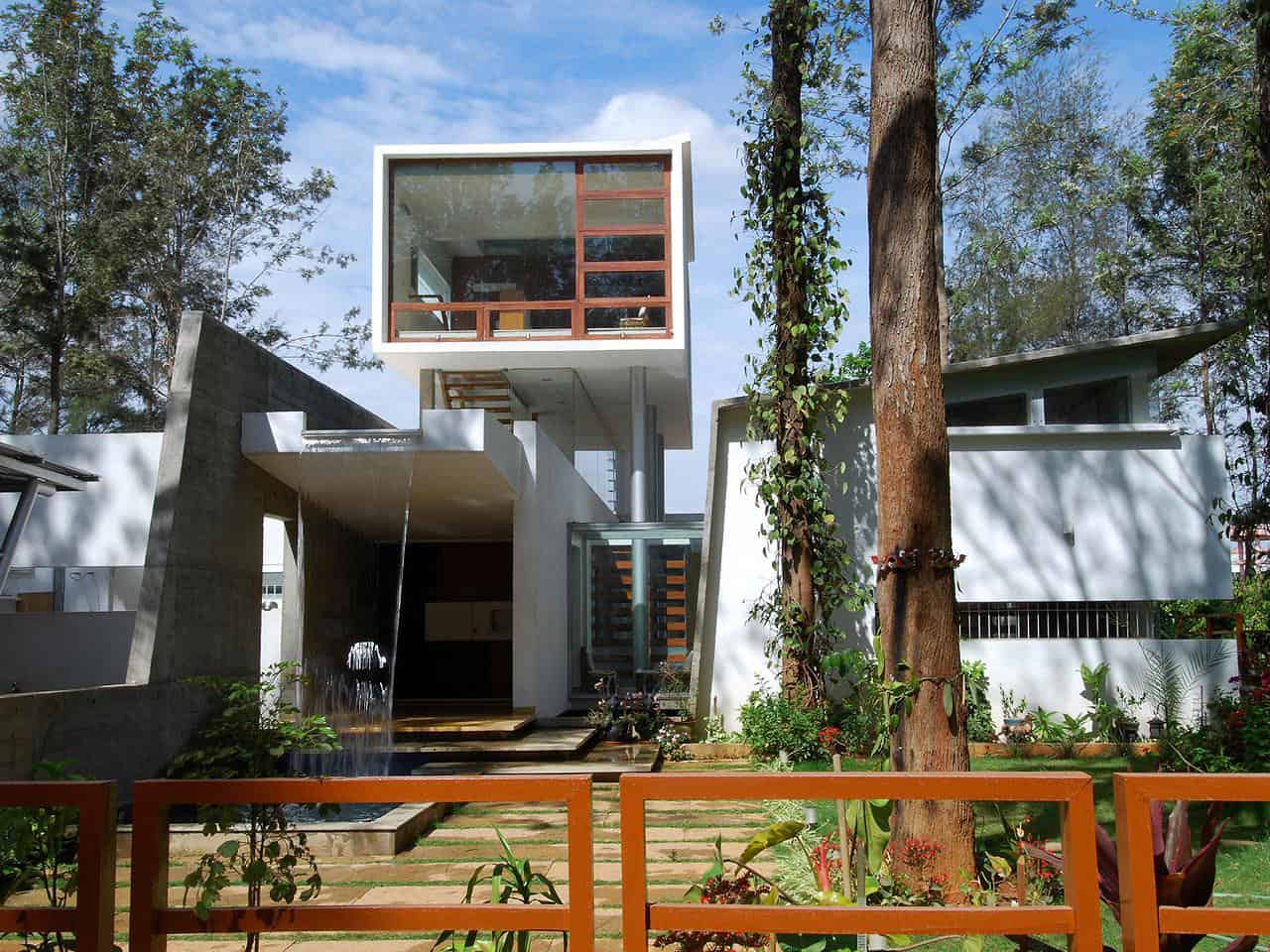 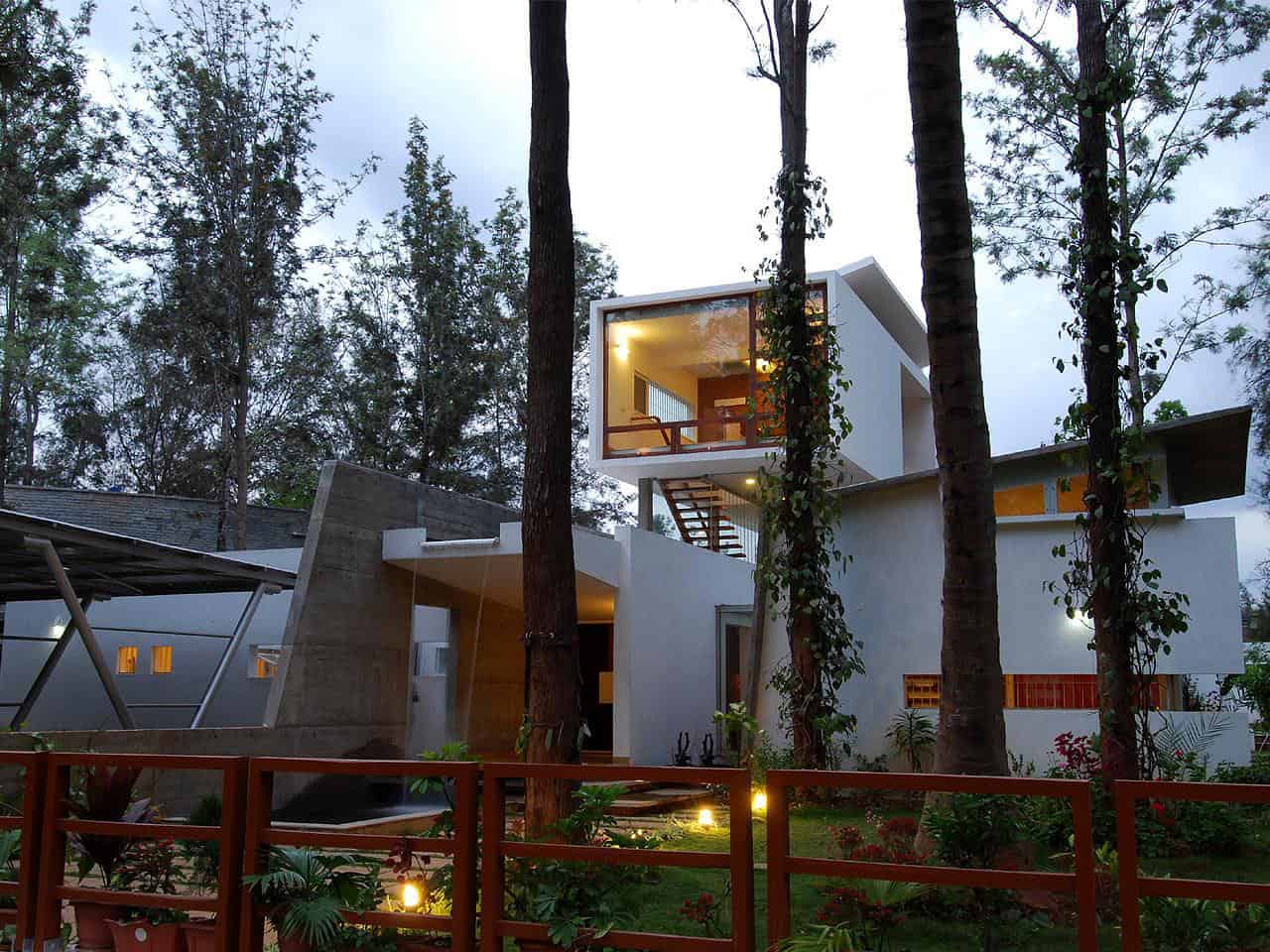 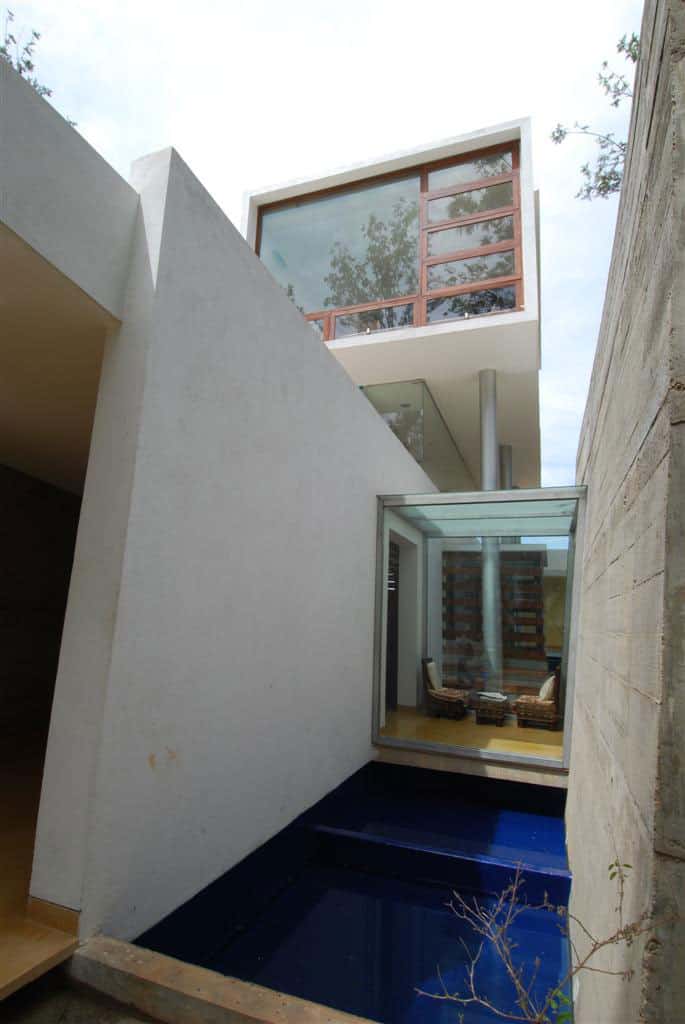 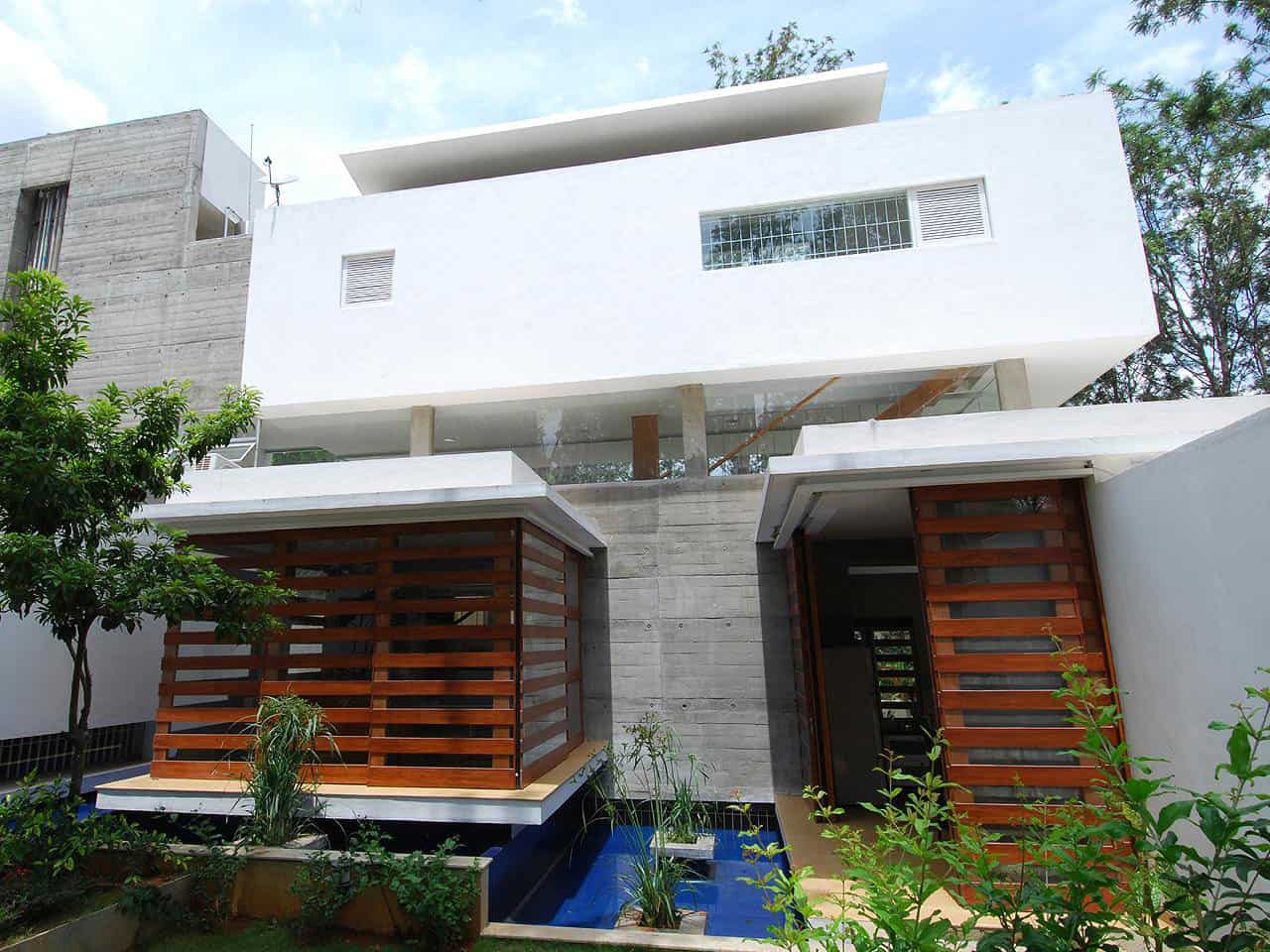 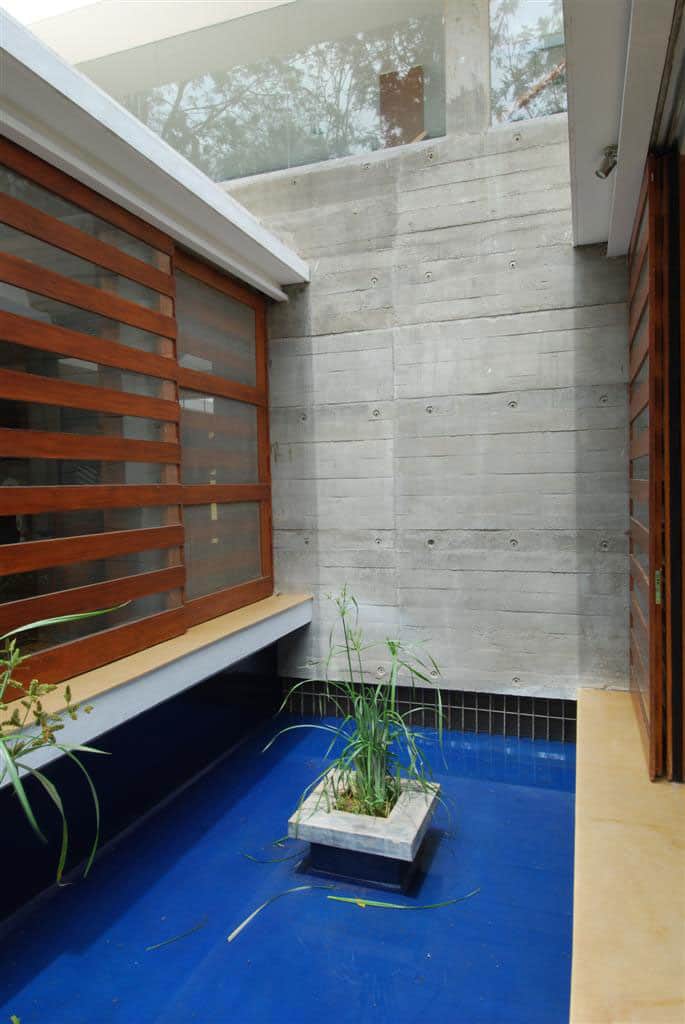 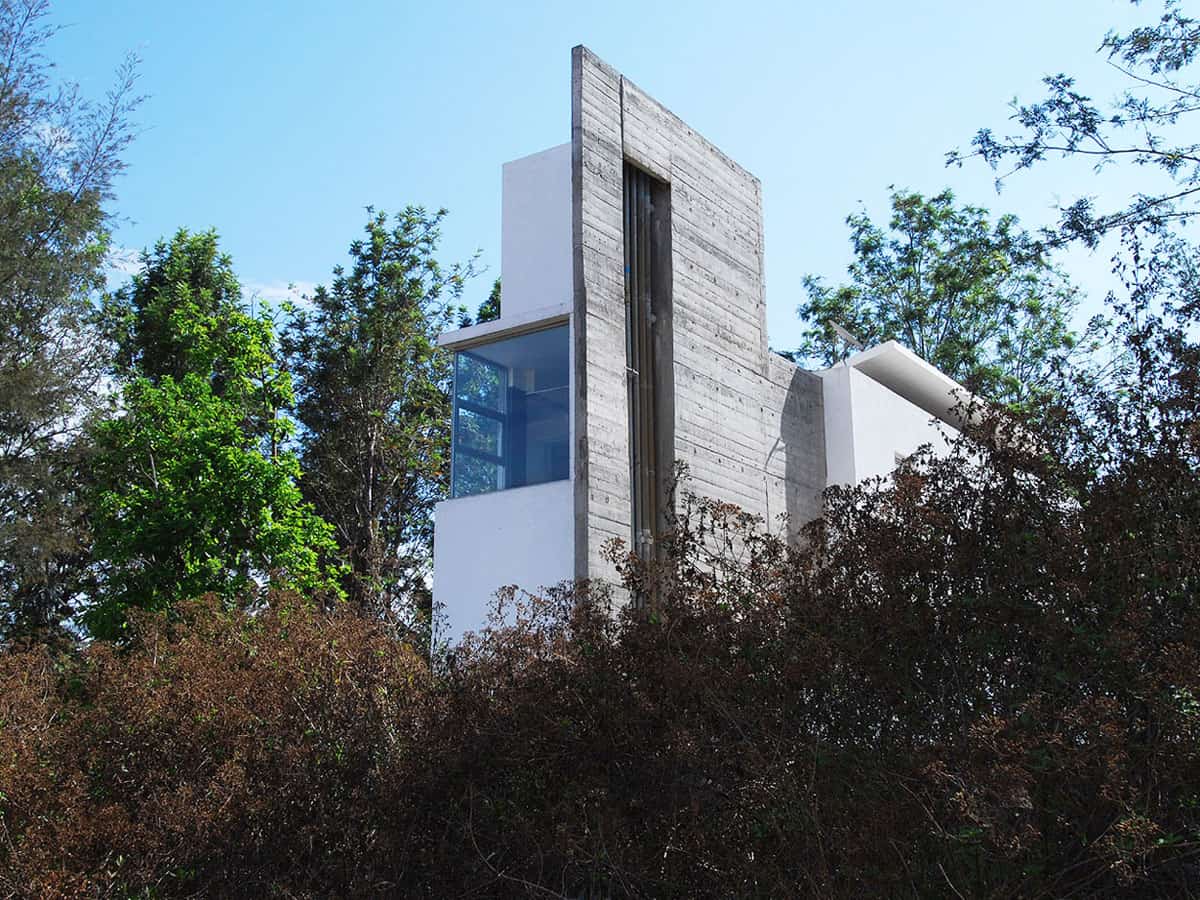 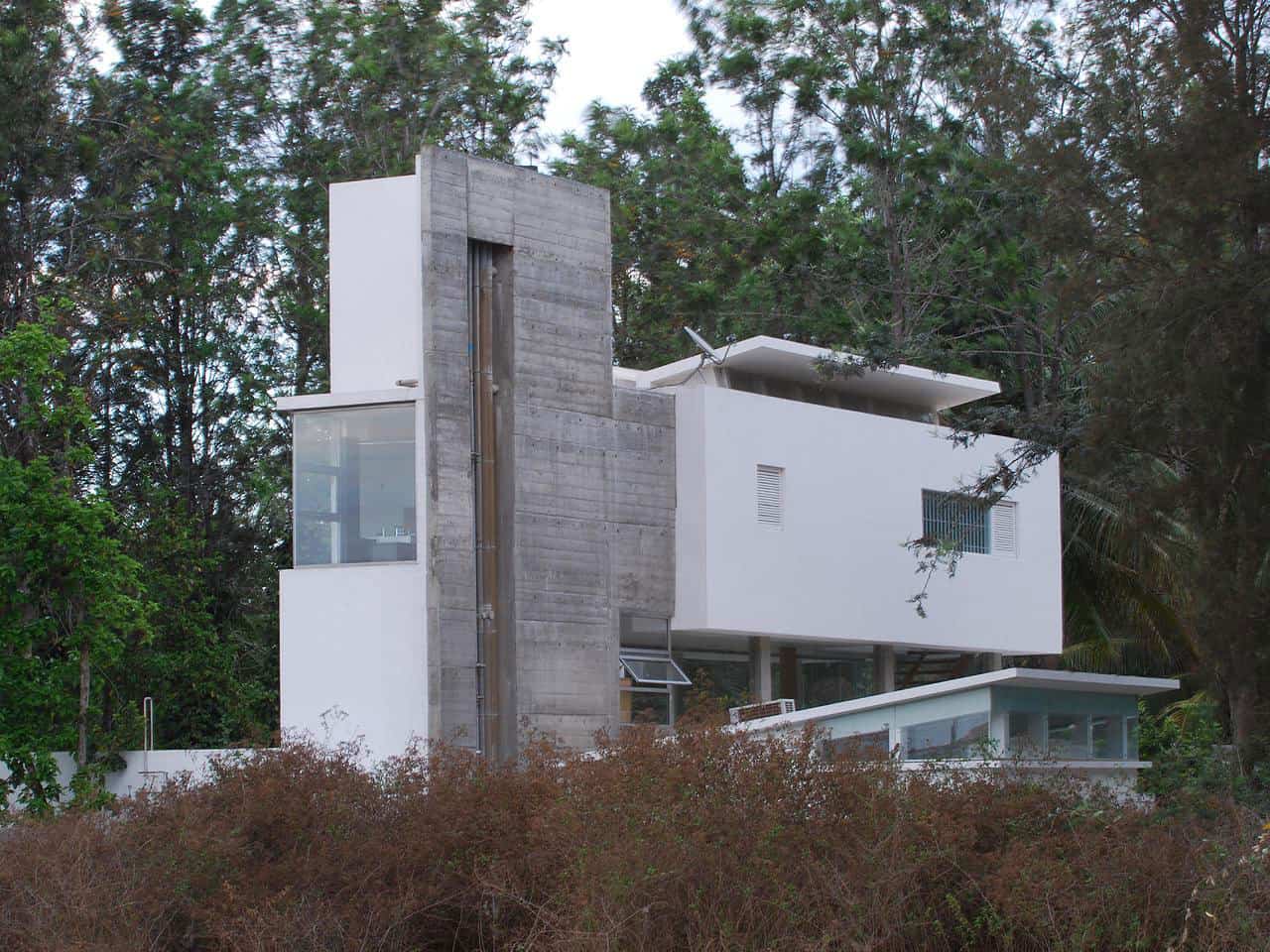 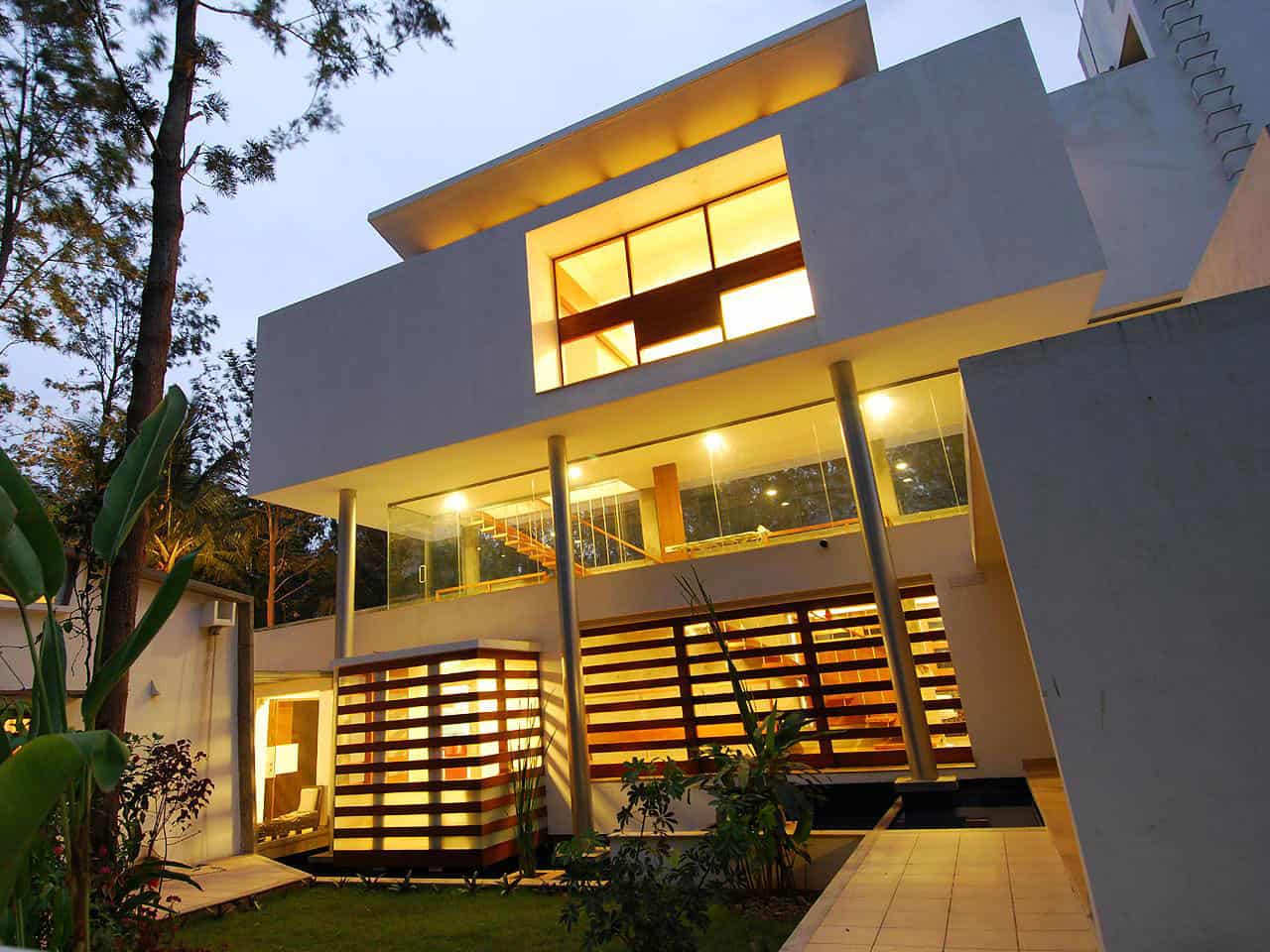 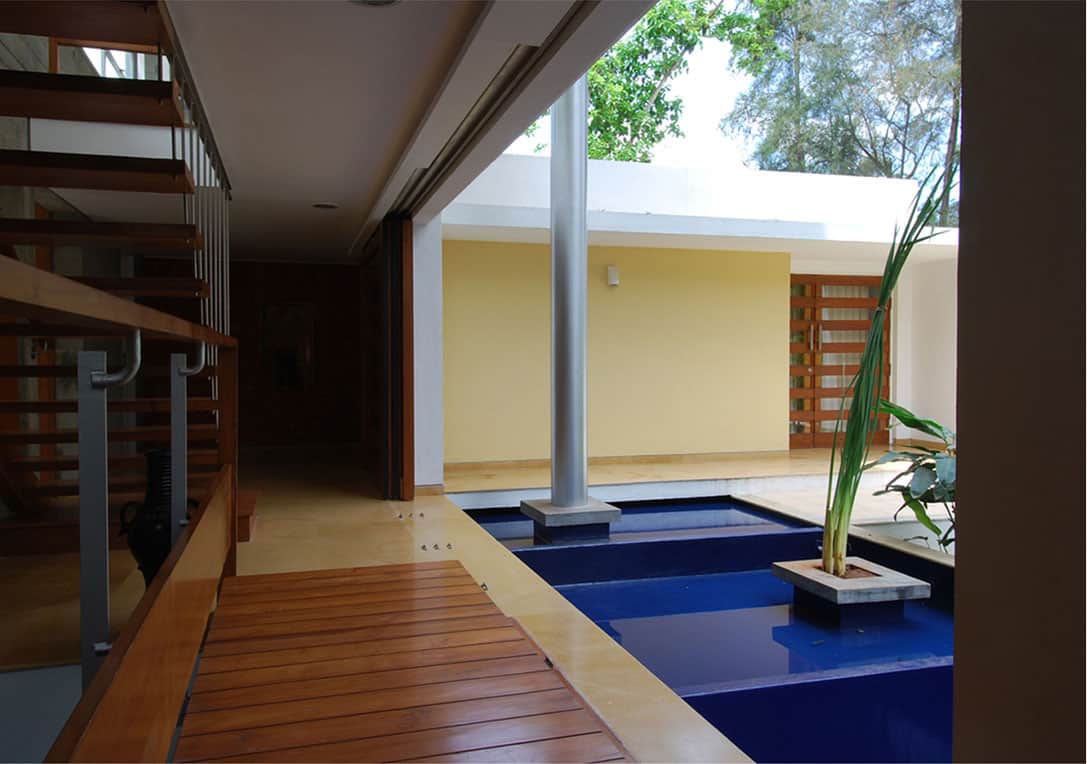 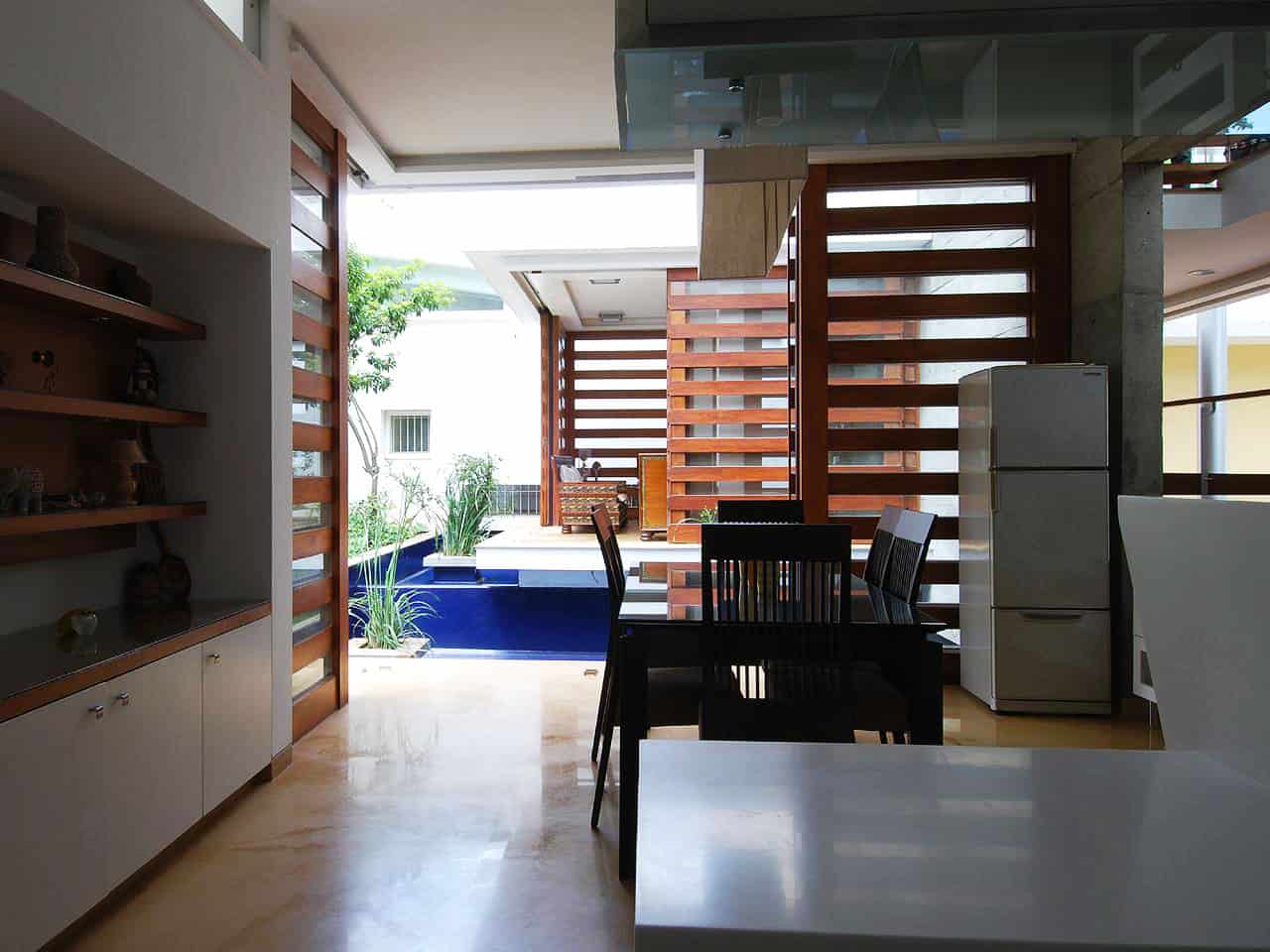 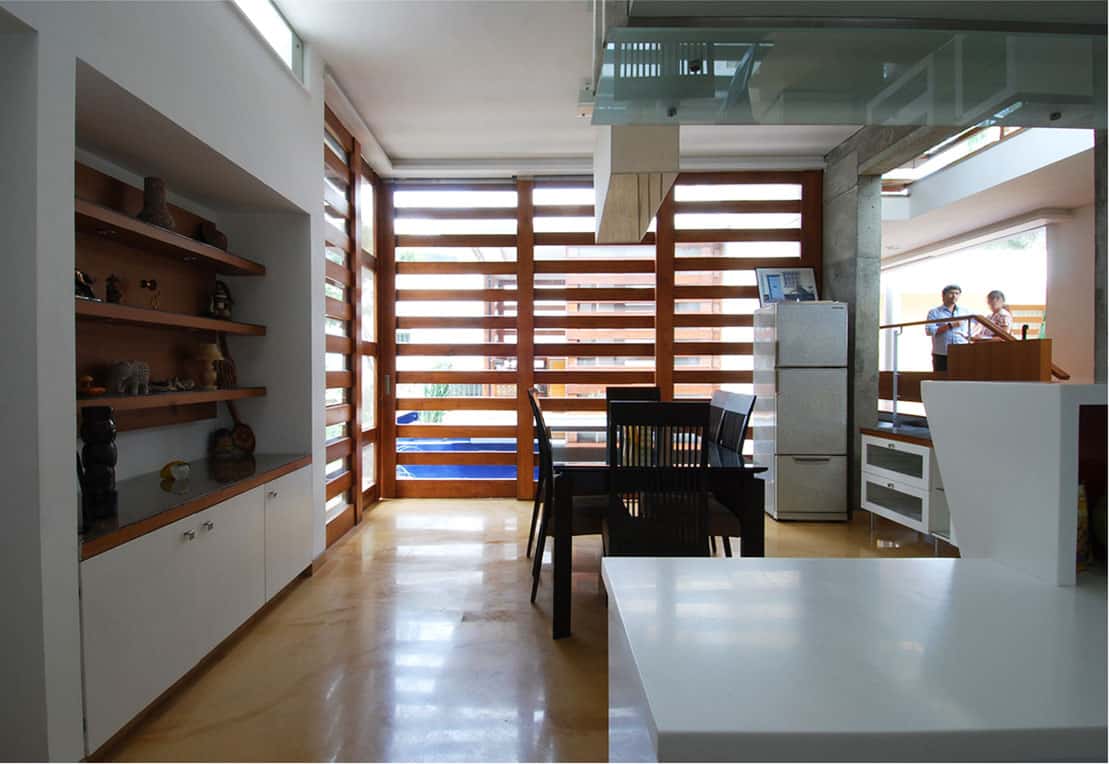 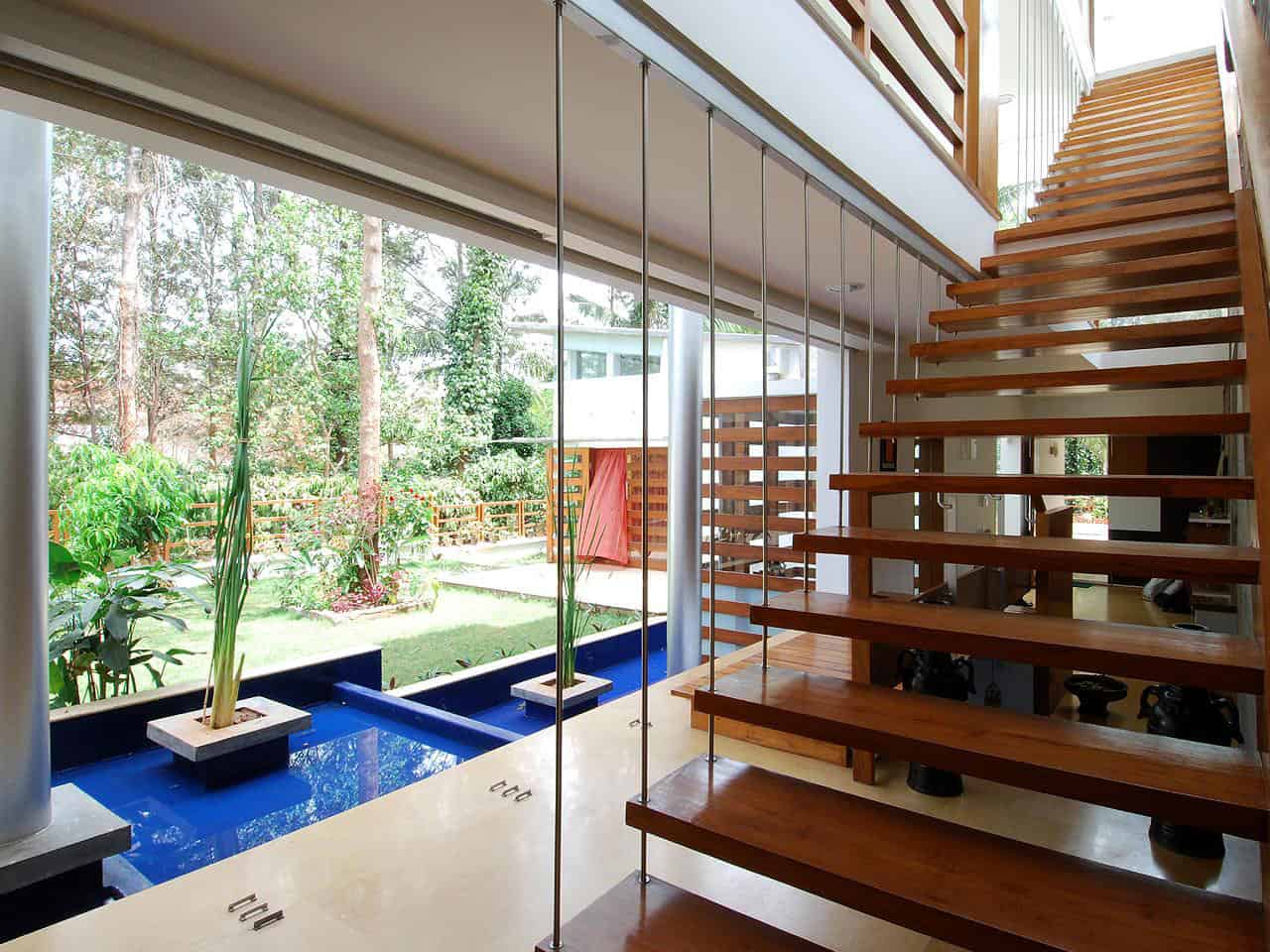 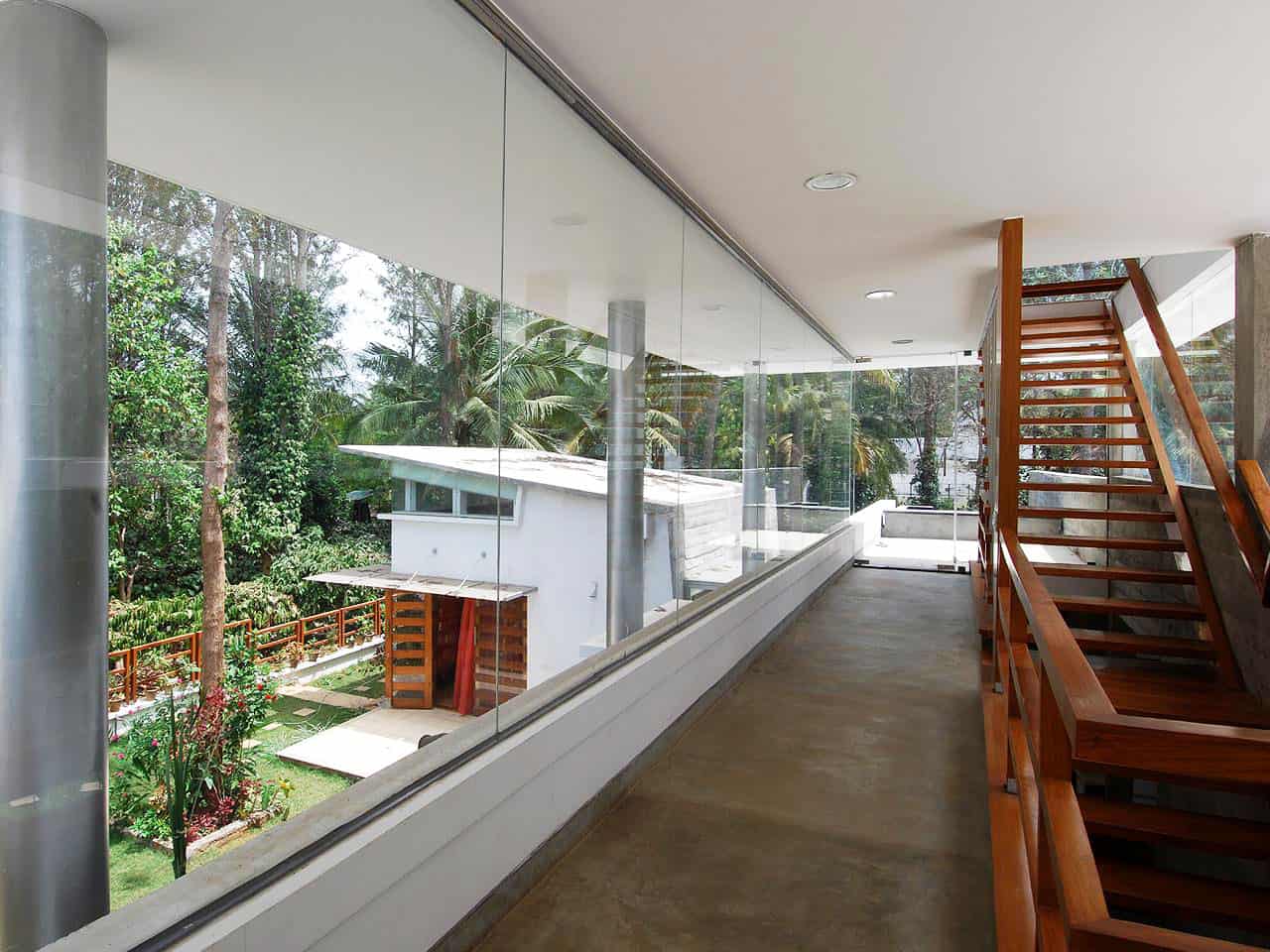 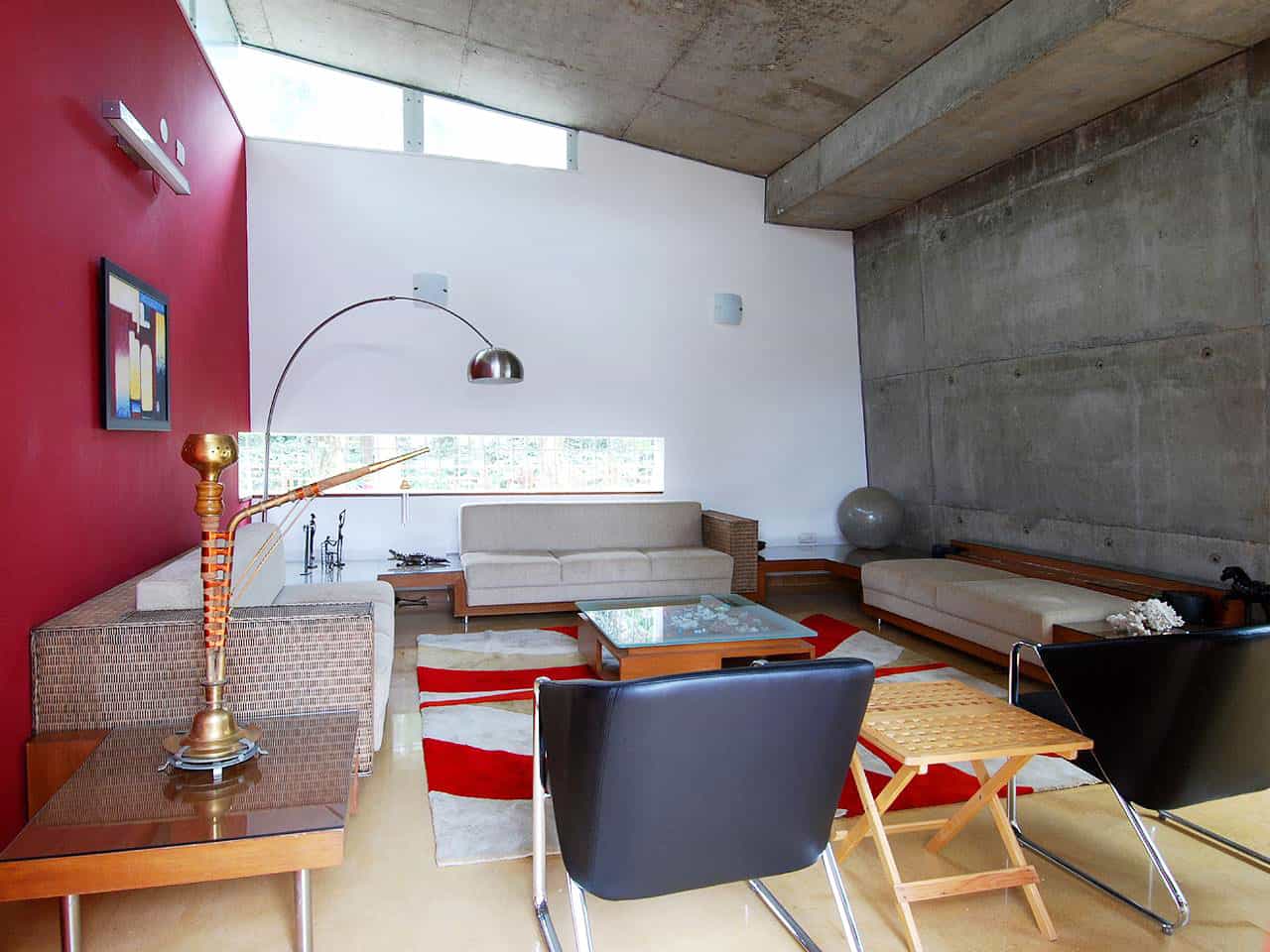 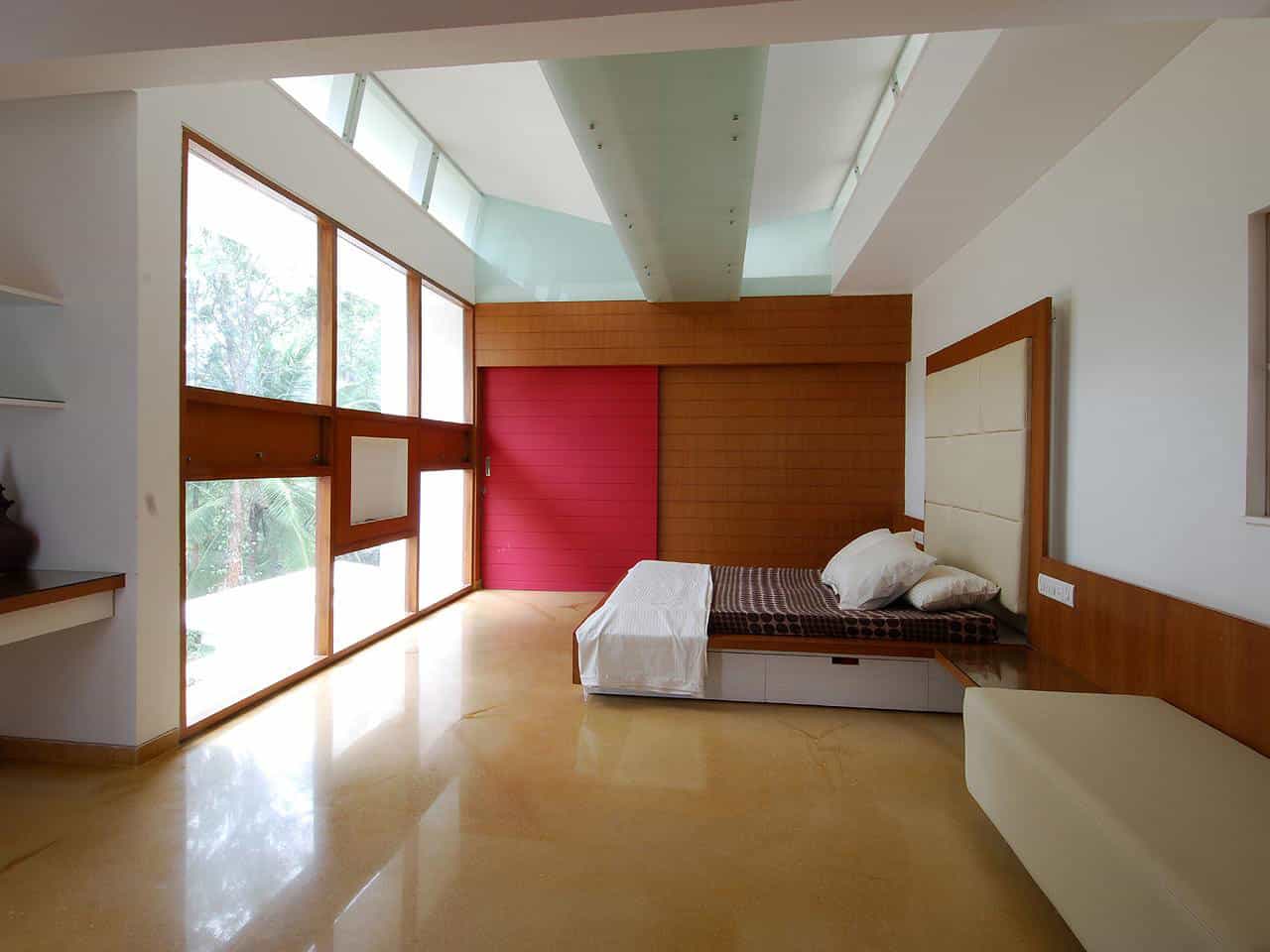 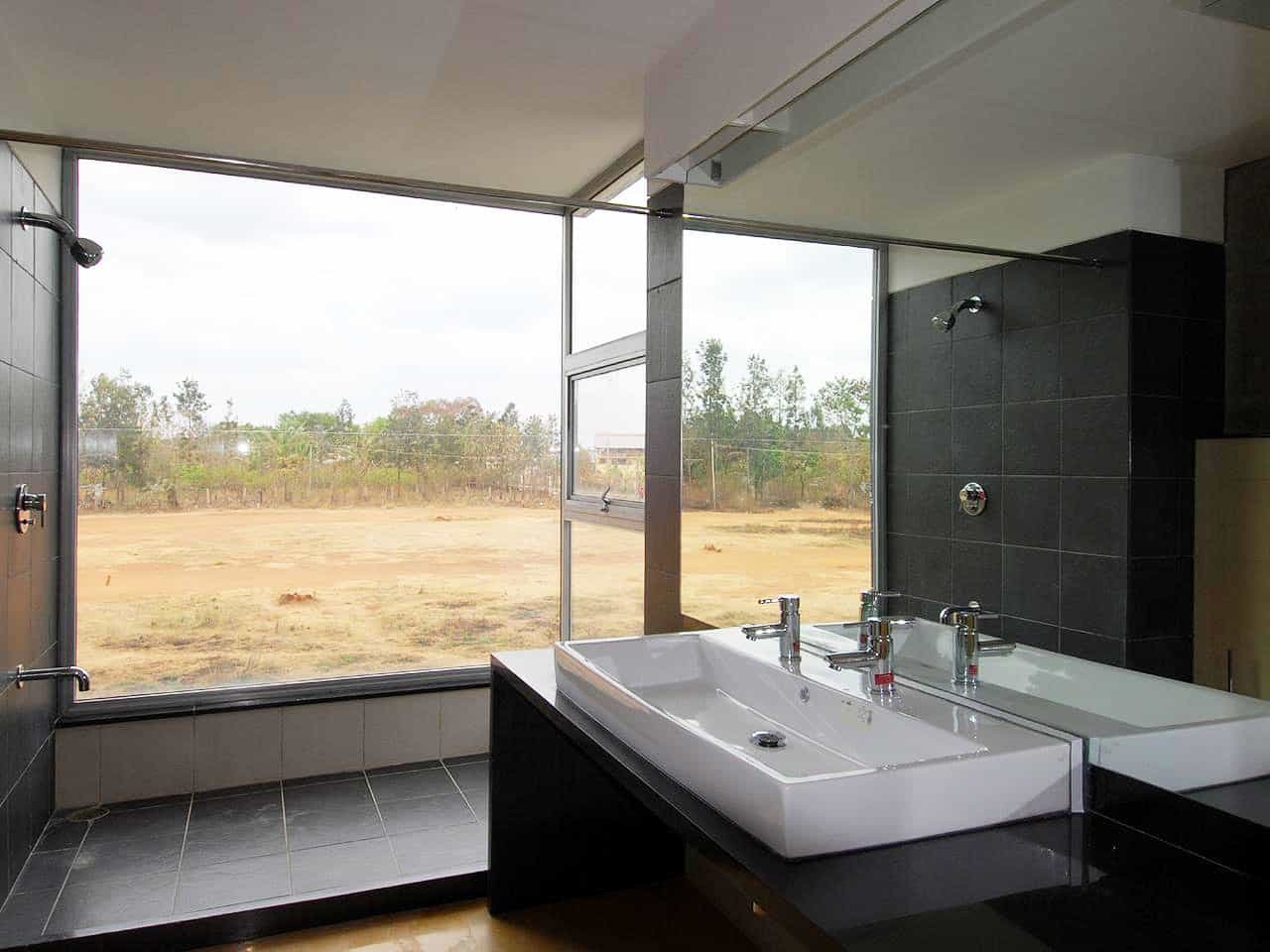 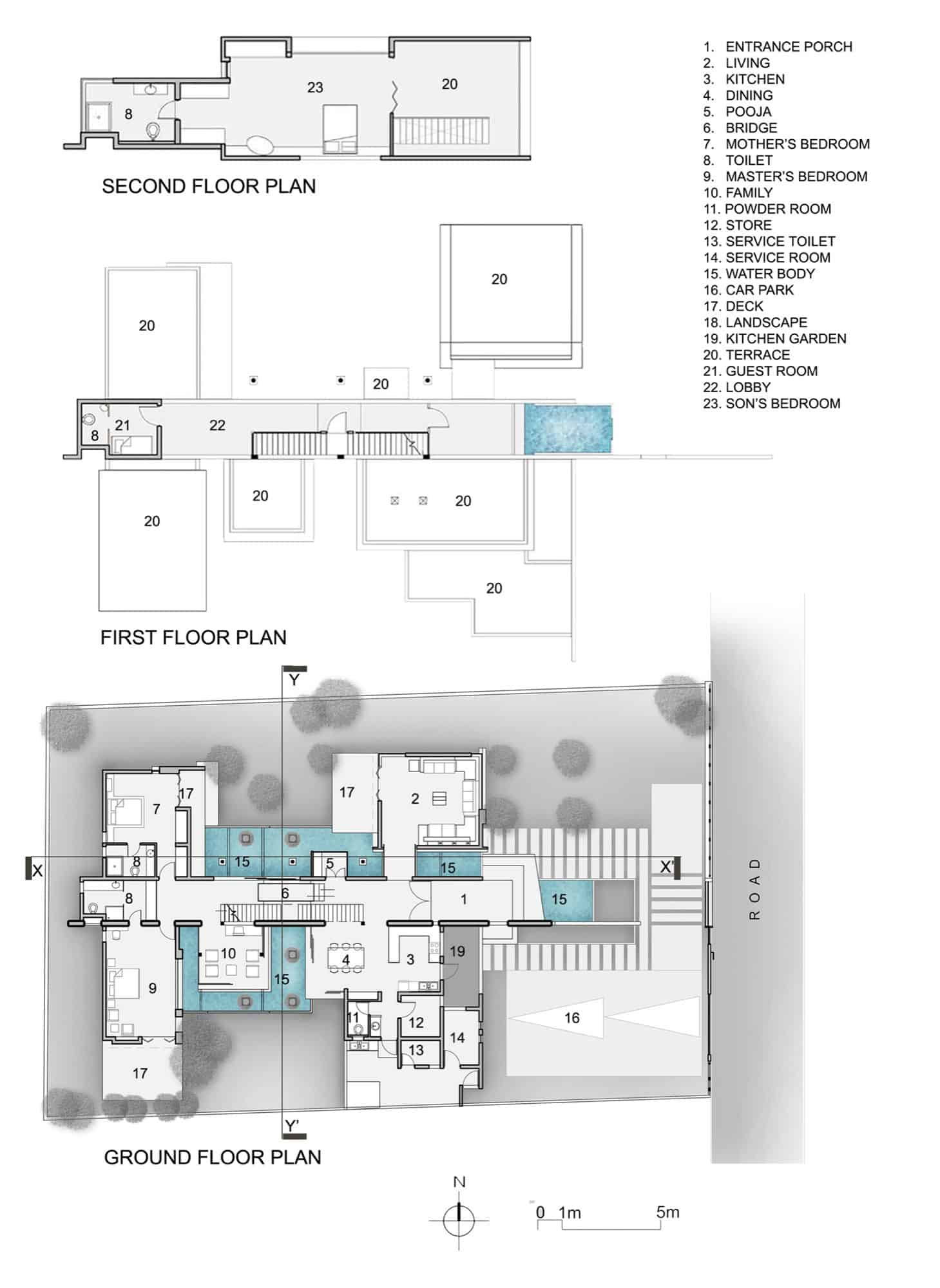 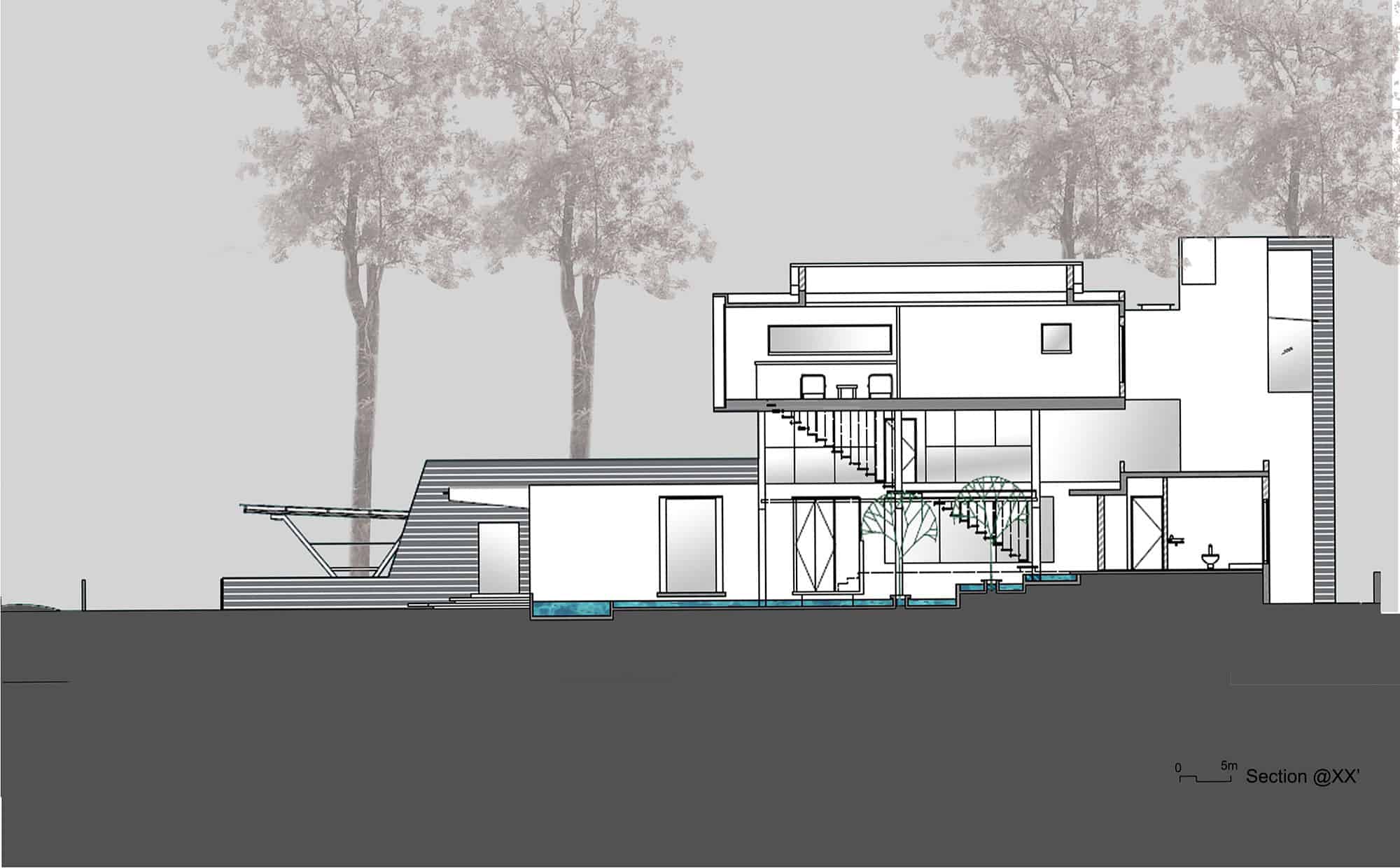 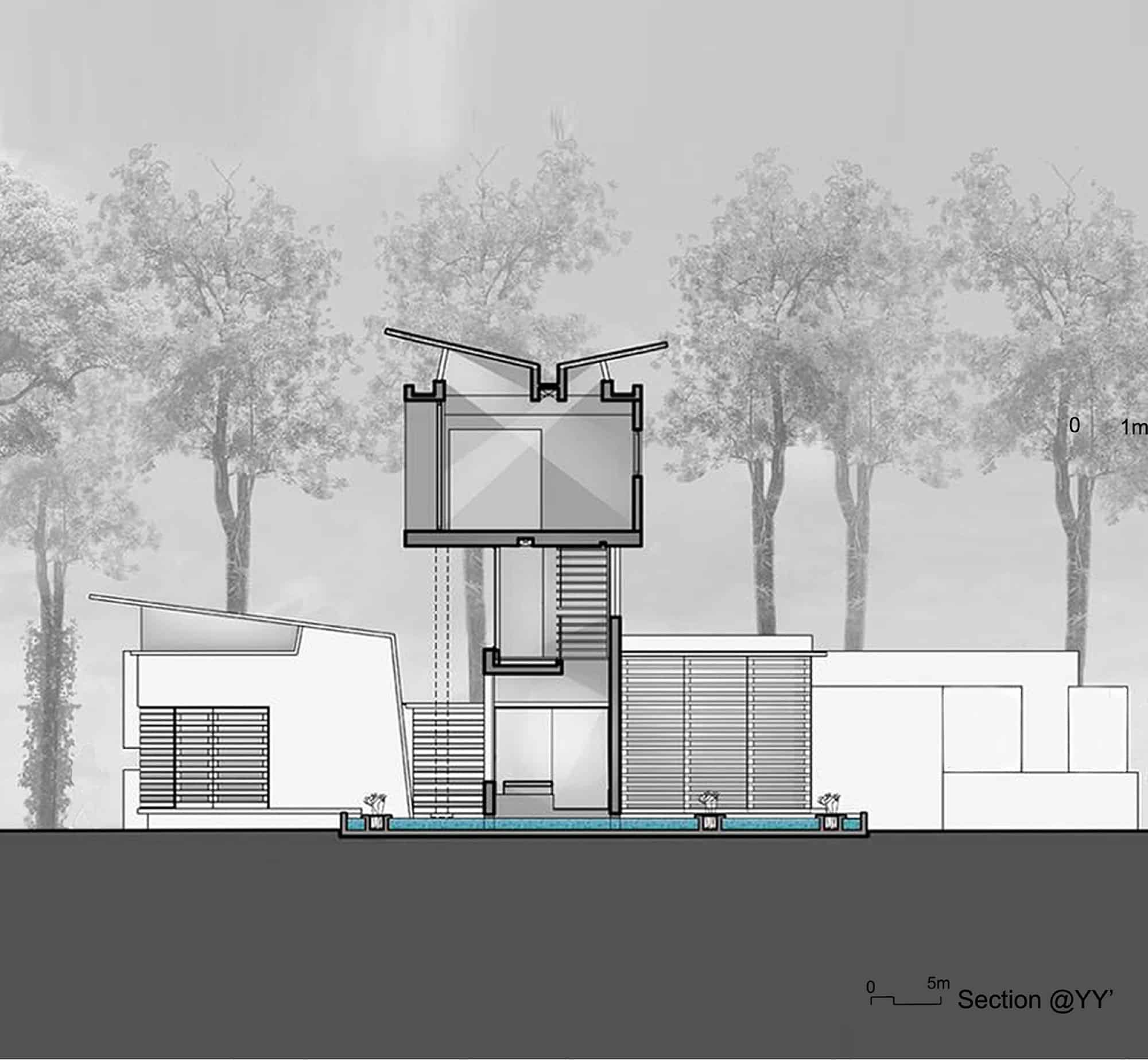 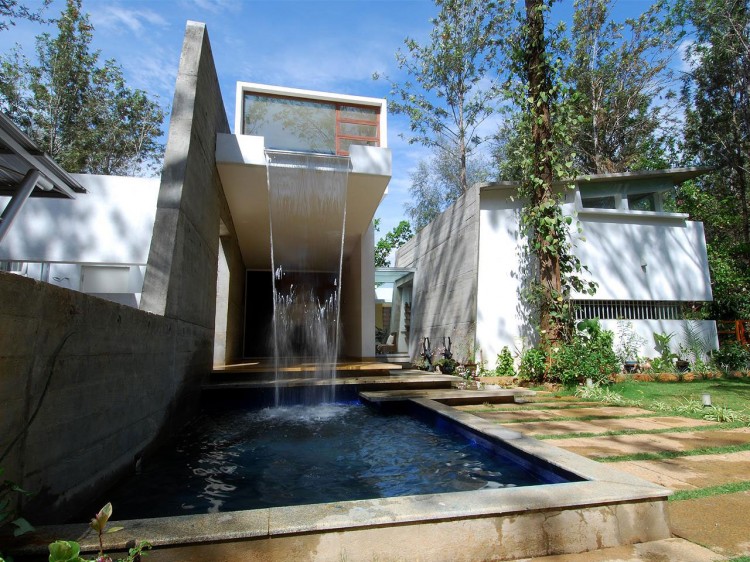 House of Pavilions by Architecture Paradigm:

“Bangalore is an open ended city having a nonconformist cultural agenda unlike other cities in India. It offers a sense of conceptual freedom which allows us as architects to explore the diverse conditions arising out of juxtaposition of histories and different cultures. We strive through our work to give an expression to the layers that so vividly characterizes this landscape.

Idea of a residence here in the urban context needs to accommodate and address concerns arising out of its multivalent conditions. Here issues of density, deep rooted cultural orientations, security, privacy, pollution, modest budgets and the labour intensive building industry are seen as potent local forces shaping architecture in the subcontinent in an age where the notion of globalization has entered the political, economic and cultural discourse.

Designed for three generations living under one roof which is a common experience here, the house of pavilions is an attempt at exploring emerging conditions. The three generations also implies an accretive attitude that allows slow accumulation or addition of things which makes it their home eventually. Being located in a gated community on the edge of the city offers opportunities to explore this relatively new phenomenon which promises an escape from the hostilities of the dense city while still being connected to it. These communities are sought after and are desirable places for luxury lifestyles which demand a strong connection to the outdoors.

Idea of a shelter in Bangalore could be as minimal as an open pavilion with just a roof over it owing to the favorable climatic conditions. There are few examples of these temporal structures used as markers, places of rest or as summer palaces in the past. Though the setting here in this case is not rustic isolation by the beach or a river front or in a forest clearing, it still offers the possibility of opening out to the landscape compared to the city house amidst dense and tighter conditions.

These readings of the place posited the possibility of pavilion like structure which engaged with the outside as much as the inside. Open spaces in the context of traditional Indian houses have always played a crucial role usually seen as extensions of indoor spaces or as outdoor rooms which supported a wide variety of functions. Ideal example would be the courtyards which served as gathering spaces or sleeping areas during the summer or as the family room while at the same time helped in controlling light and temperatures keeping the houses cool in the hot summers.

The familial need for distinction between the public and the private spheres supported the idea of a house as a series of programmes which were seen as identifiable pavilions exploring the flat 1000 sq m plot and its surroundings. This structuring of spaces also helped in negotiating the silver oaks and other trees existing on the site. this could be seen as a departure from the consolidated and introverted model of a city home. The process records a series of informed decisions which leads to the expression and the experience of this house. The need for differing degrees of privacy is explored through two horizontal bars along the north south separated by large open space in-between. The public zone includes drawing, dining and kitchen areas whereas the private zone largely caters to bedroom spaces. Each of these volumetric bars is modulated to accommodate the necessities. The two zones are connected by a movement spine which flows to become the family pavilion in the private part of the house. One of the spaces is taken to the upper level to explore the surroundings and also bring in a sense of personal space considering the requirements of his son. We considered lifting it above the conventional height of 3 meter to a height of 5 meter to explore the surroundings and in the process generating multidimensional space in-between the ground and the upper levels which serves as studio library and also a store over the spine connecting the two zones. The idea of the landscape becoming a part of the structure is not only about the experience along the horizontal plane but also along the vertical. Water is introduced as a thermal regulator to cool the house naturally through evaporative cooling during the hot summers and also to accentuate the outside inside experience, as in the house sits on a plate of water which weaves into the spaces and lends to the quality of experience. The resulting model presents an inversion of the courtyard house model where the central inward looking open space becomes an open ended courtyard on either sides of the spine. This allows for privacy to be maintained at the lower levels while allowing the upper levels to visually connect with the outside.

The living spaces that these pavilions accommodate mediate with the immediate surroundings through envelopes of dynamic and static planes. The dynamic planes are sliding panels or hinged doors which when open to bring the outside in blurring the boundaries between outside and inside. Depending on the nature of program and their location in the landscape these spaces are defined by envelopes with varying degrees static and dynamic panels. The opening panels are made up of timber and glass where the wooden strips help in regulating the quantum of light entering the house and also replace the traditionally used grills as a security measure while recalling the traditional jaalis (screens).

The experience of moving through the structure is heightened by the tactility of the spaces and the overlapping sequences of built and unbuilt. One is greeted by the water body which continues through the house flanking the central spine defined by an exposed concrete wall. The spine is a space that forms the back bone of the experience where one has to pass through it to get to any other space. The indoor outdoor experience is further heightened by interim spaces connecting the various pavilions.

Spaces such as the glass encased bridge connecting the drawing room and the spine or the space between the upper and ground level which acts as a studio/ library space enables an engaging visual connect with the outside. The studio opens out to a viewing terrace space flanked by water which flows down to the lower level water body. The drawing, dinning and the two bedrooms at the lower level open out to the garden courts flanking their edges. The steel columns supporting the sons bedroom disappears merging with the tall silver oaks allowing this volume above seem like a hovering entity. This bedroom can integrate with family at this level to become a larger flexible space. Vertical connect in the form of partially suspended steel and wood stair case weaves through to link the various levels. The roofs of the living , master bedroom at the lower level and the sons bed room at the upper level are modulated to form slopes which helps lighting and ventilation  in the. This helped in maintaining favorable quality of light even with curtains drawn for privacy or to just control the quantum of light entering the space. The resulting roofscape adds to identifiable and the experiential aspects of these pavilions.

Sensitive planning and orientation strategies encourage predominant dependence on natural light and ventilation while at the same time also adopts passive strategies to cool the building and heating water. Rain water harvesting strategies like ground water recharging pits helps in regulating the surface runoff. It uses local materials and people for construction. This inside outside experience captures the essence of living amidst gardens in a rapidly developing place like Bangalore which is on the verge of losing its sobriquet “the garden city. Elements such as the verandah, jaali screens, sloped roofs which form the vocabulary of a traditional house is recast to express the familiar yet new experience reflecting the changing conditions around. The use of local materials and conventional building technologies along with industrial materials, juxtaposition of interiority and exteriority, lightness and heaviness, traditional preferences along with contemporary organization lends this project a spirit reflecting the multiplicity characterising the landscape of Bangalore.”