This contemporary home is located in Los Feliz, an affluent, hilly neighborhood in the Hollywood district of Los Angeles, California, USA. 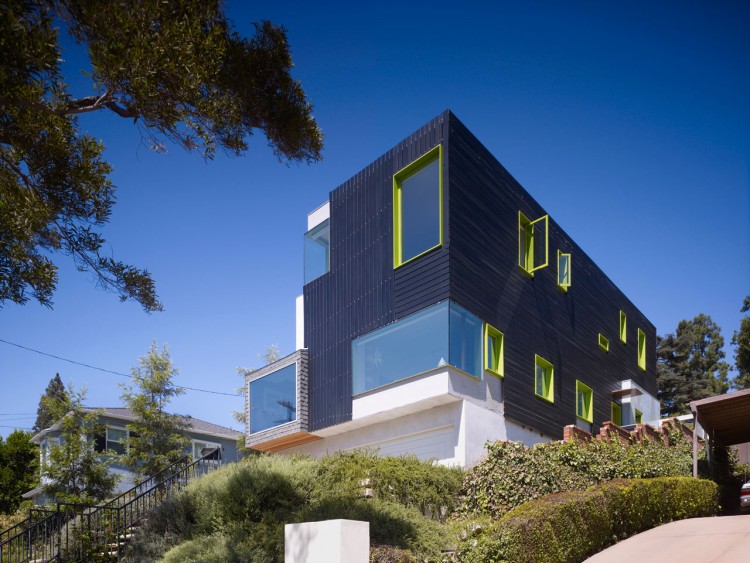 “The house is designed by Warren Techentin, AIA and is situated in Los Feliz, CA an old Los Angeles neighborhood built in the 1920’s, known at the time for its lush, heavily-landscaped estates. Since that time the estates have all been subdivided into a dense array of smaller lots while its trees have grown to full, mature heights. The house seeks to integrate the surrounding views, trees, and neighborhood while maintaining privacy within. Several design strategies were pursued in parallel including the implementation of sustainable systems, traditional methods of natural cooling, the display & conservation of an art collection, and the orchestration of flows during parties and other events. In most cases, it is the overlap between these that allowed unexpected design moments.

The primary architectural strategy was to invert the continuous inside-outside relationship of Los Angeles Architecture Lore – typified by the sweeping, dematerialized walls of Richard Neutra – into a closely choreographed set of relationships between interior and exterior through carefully modulated windows, placed alongside art (as windows unto themselves), which simulates, augments, and mediates the effect of this indoor- outdoor relationship while simultaneously providing privacy in a dense neighborhood. The house is built on a submerged rock out-cropping, placing the main floor of the house directly at the level of the surrounding tree canopies and the upper level overlooking the neighborhood canopy to the city beyond. But the proximity of the neighboring houses made large openings problematic. Instead, analogous to Dutch theories of “dry” design, diagrammatic form and materiality were used to segment the life of the home into discrete ‘performative boxes’ casually riddled with windows. Openings were placed to orchestrate a series of vistas between the interior landscape of the home and specific trees in the neighborhood. The windows help create a ‘telescopic effect’ whereby the occupant feels an active connection with the trees aligned beyond. Liquid Ambers in particular are populous in the neighborhood and several windows are dedicated to framing these trees and their foliage transformation throughout the year.

Montage vs. collage: The foundation was virtually the only portion of the original home that remained and served as the starting point for the remodel. The plan and flow of the house were re-worked to develop different loops and circuits. An upper, third floor was added as well. In the new 3,000 square foot layout (300m), the different activities of the house were separated, latent domestic boxes were defined and five ‘essential’ boxes were characterized: 1. life spaces (bedrooms and living rooms), 2. live/work ( offices and media room for owners – one of which is a television writer), 3. kitchen, 4. embedded pool bathroom, and 5. the semi-underground support and storage spaces. Joining these volumes is a loose, faceted enclosure which connects the boxes, squeezes between them, and creates a double-high space around which the activity of the house moves. Like the windows creating connections with the neighborhood, the rooms were each formed and proportioned to create an interior web of connections. Yet a sense of differentiation was maintained between each. The different materials of each space lends their own personality to the spaces – each butting up to the next, but without exposing the seams between them. The result is a quasi “mutant Victorianism” where each room has a coherency of its own yet informed by and part of the views into the adjacent spaces.

Flow was developed to encourage circulation among the differently scaled rooms during parties. The house was developed to encourage natural ventilation – as the upper “tower” heats up, it helps create draft pulling the hot air lower in the house up and out. The materials and colors were all selected to reinforce issues of sustainability as well as effect. The black siding was raised off the wall to help shade it, drawing the heat away from the surface of the house. As before, much focus was placed on windows and in particular the glass. UV filters, ultra-clear, insulated panels, low-E mirrored surfacing, and other glass technologies were laminated to modulate the performance of the glass: protecting the artwork, reducing heat gain, or otherwise transforming visual perception. Other materials include greenhouse plastic, platinum tile, glow-in-the- dark plexiglass, poplar, wool carpeting, felt, stainless steel, wallpaper, pool tile, leather, and overpainting.”