Space Architecture has designed the K+JC House project for a family of four. 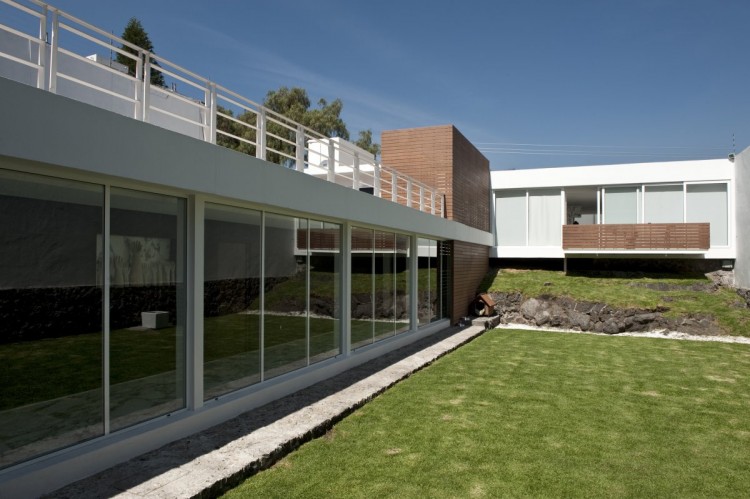 “It would seem that house k+jc2 was destined to be what it is today. The owners, a young couple with two daughters, were looking for a spacious place, full of natural light, with a garden and open spaces.

The Pedregal was an idyllic place. This residential area was initially planned in the mid ’40s, in a development by Luis Barragán which became a point of reference for the modernist style in Latin America.

From the outset the clients were looking for a house that would represent the original style of the Pedregal and that its state would require complete renovation. Not an easy task given that many of these original jewels of the fifties have been demolished to give way to small gated communities. And so after a few months they found something that epitomized the original bright and light spirit of the Pedregal.

The house is articulated, with two intersecting parts. The first rests on a great volcanic rock approximately twenty meters long. In the form of a rectangular prism, it houses the living room, dining room, television room, kitchen and the study belonging to the client’s wife, a writer and booklover. The second part, a half-level below, contains two bedrooms and a games room. A large exterior terrace was designed on the upper part of the house.

The design concepts were simple: to make the most of the good distribution of the original house but to lend it a contemporary style and to make it environmentally friendly. Equally it was important to create a space in which art would take centre stage, that the lighting should exploit the design qualities and generate agreeable atmospheres and a furnishing specification in line with the quality and style of the rest of the house.

In general, the design was created around very bright open spaces, giving views of the garden from the house.

In the first part of the house, a stainless steel mesh was used to divide the living room and dining room from the rest of the spaces. These two areas were furnished with classic pieces by architects of the era of Le Corbusier and Mies van der Rohe. In contrast, the table at the center is made from a wrap of one of the stainless steel meshes, and owing to the quality of the chosen German wood, it gives rise to a contrasting aesthetic.

These spaces were decorated with works of art and objects which the couple had been acquiring as much in Mexico as in other countries.

The study, overrun with books of various colors, shapes and sizes, has bookcases covering the walls and with an orange leather desk specially made for the space; a courtyard provides natural light and ventilation to the study.

The second section which contains the bedrooms has a great walkway which on one side provides access to the rooms and on the other uses a large window onto the garden. The wall that surrounds the rooms is covered in hand-stitched leather which gives a feeling of warmth in contrast to the sheets of Italian arabesque marble on the floor. The finishing for this walkway is inspired by a small section of the same type of marble upon which rests a sculpture by the Mexican sculptor Javier Marín.

In the main bedroom, a second exterior terrace is created as an extension to the room, divided solely by a door-frame which practically disappears upon opening up this space.

Part of the bedroom was designed as a reading area and a dressing room which give us the feeling of being in a boutique hotel.

Regarding the palette of materials, the intention was to use the fewest possible but with great creativity. All the floorings of the house are of a combination of marble and oil-treated wood.

In the television room floats a white crystal and the side wall is covered by suede, which give great quality to this living area.

The house relies on a system of rainwater capture, which after cleaning is used for bathrooms and irrigation. The project was designed with low VOC content materials. There are also solar water heaters and Lutron lighting controls which are energy saving as well as having the ability to create pre-programmed scenarios.

House k+jc2 represents a lifestyle which marries art, design, play and the sense of being a home. We can find a work of art in each space, including bathrooms and kitchen. The family living areas are strategically situated for light to provide quality and comfort. Play and fun, represented by means of shapes, colors and objects, are things which without doubt the smallest member of this household enjoys.”

MVRDV Architecture Designs a Home Around an Olive Tree in Rotterdam, The Netherlands

A Unique Urban Garden in Kuwait

Remodeling of a Cincinnati, Ohio Loft to Achieve a Comfortable Space Full of Natural Light

Magnificent Remodeling and Extension of a Californian Bungalow

Magnificent Remodeling of a House in Australia