Australian studio 4site Architecture has designed this 419 square foot south facing extension at the rear of  a cottage in Melbourne, Victoria, Australia. 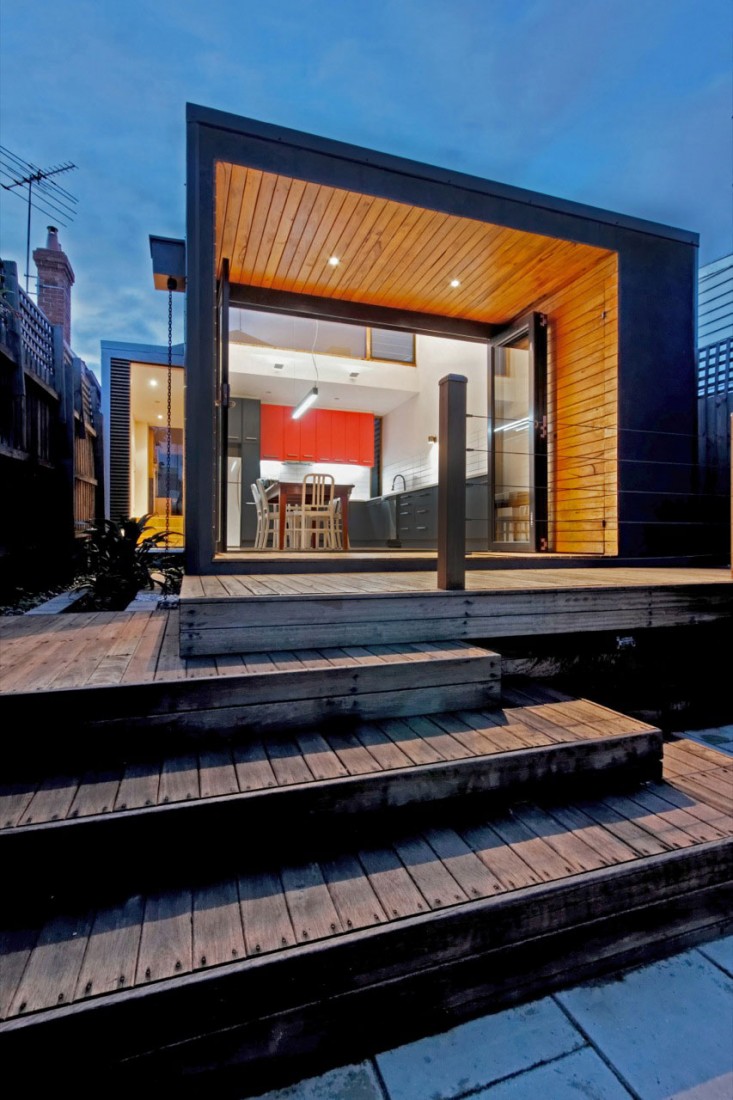 “The existing property was typical of an early-20th century worker’s cottage, with a poorly planned series of gloomy, dysfunctional lean-to additions, no access to natural light and no direct connection to the rear yard. It did however provide two amenable bedrooms at the front and a functional, small living area. With this, the client’s brief asked for the re-inclusion of a new bathroom, laundry, kitchen and dining area into a more livable manner.

The difficulties that the site presented consisted in the property’s south-facing orientation, hampering direct solar access and its the limited access to private open space.

In response, the planning logic was to create a compressed centralised service core containing the bathroom and laundry, allowing a higher volume that is the kitchen/dining room to connect to the yard at the rear.

Formally, the addition consists of two elements connected by a small hallway. The first is a white box, containing the new bathroom and laundry; the second being an open plan kitchen and dining area, a black metal clad box which is setback one meter from the boundary and reaches up over the white box for northern sunlight.

Upon entry one is presented with a view through the house to a small courtyard given over by the one meter setback of the addition at the rear. This vista, created by a full height window at the termination of the connecting hallway gives an immediate sense of light and flow through the house. The inclusion of a side timber slot panel also provides the ability to cross-ventilate whilst providing insect screening and security, a simple and economical device that was inspired by the simplicity of 50’s Modernism.

The transition from the existing cottage to the new addition utilises a compression and release effect in the ceiling heights. The high ceilings of the existing cottage transfers to a much lower ceiling through the connecting hallway. This compression is then released again upon entry into the kitchen/dining area. The visual shift amplifies the sense of height and openness and strengthens the delineation between the new and the old.

The kitchen/dining room is a simple shed-like structure, a skillion roof that terminates at its apex with a clerestory window facing north. The use of this highlight window maximises the amount of sunlight, both direct and bounced off the sloping ceiling, giving the new addition a warmth and openness that overcome the constraints of the site.

The continuous laminate kitchen bench element becomes credenza and a small work space with computer, unifying the whole kitchen/dining space as a whole.

The connection to the outside is amplified by the framing of the rear yard by a low, beautifully proportioned timber clad verandah that acts as another compression device before being released to the small backyard beyond.”

Extension to a Small Cottage by Innovarchi