Mexican studio Agraz Arquitectos has sent us photos of the House X project. 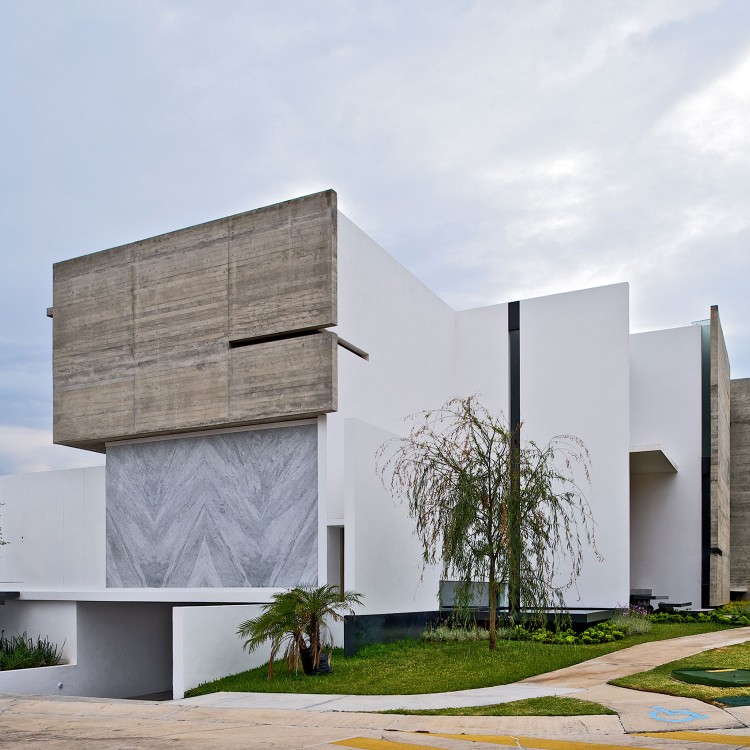 “A corner shaped terrain is always an unusual practice for architectonic design. This is why a different solution was required for this house, which is adjacent to another house project of the firm, allowing the opportunity to establish an architectural dialogue between them.
It is also a project where special emphasis was given to the architectural concept and language of the house. Amongst this, the automobiles placed beneath the dweller as customized. And because it is in a corner shaped piece of land, the short front is destined to them in a mid level basement. Therefore, principal façade disregards the vehicles from all sight, granting the rest of that level for service room and a stairway that leads to the lobby, which can be accessed also by the main entrance.

The terrain was divided by the floor setup into three similar size areas. One strip is given for the garden patio where a small tree-lined plaza turns into an extension for kitchen, living and dinning gallery. In the middle comes the central axis of the line stairway going up from the basement to the first floor and in another flight, to the second floor. And then comes the third area given over to studio, bathroom and main entrance.

This first floor is within itself one single area with retractable windows that add up the patio to the central space of living, dinning and kitchen. Whereas the second floor is divided into two bedrooms with bath and dressing room each, and a main bedroom that seizes the largest part of this surface, also with bath and dressing cornered room looking into a large window.

X House is, in itself, one basic diagram with a simple scheme that gives out a strong faced house. It is a combination of white concrete bodies, marble plates and design metallic shutters.

Knowing it is the last piece on the block X House turns out to be the hinge that pulls it all together by offering façades on both of its sides.”

4 in 1 House by Clavel Arquitectos