Valerio Maria Ferrari and Cinzia Mazzone of French studio VMCF Atelier have completely remodeled this duplex apartment in the heart of Paris for themselves and their family.

The architects originally bought a sixth floor apartment in a 1850 building, plus 10 former maid’s rooms in the attic directly above. 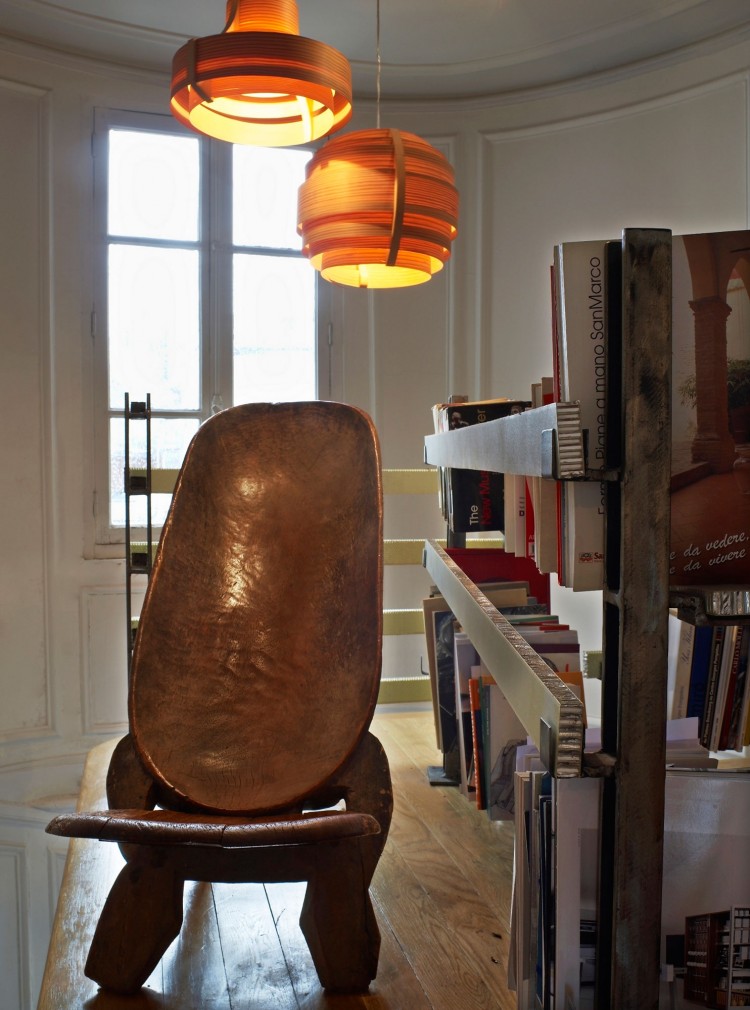 Although the building was constructed as early as 1850, the apartment designed by Valerio Maria Ferrari and Cinzia Mazzone was officially created in 2003. That year saw the purchase of the 60 square metres of the home on the 5th floor of a classical building on the Rive Gauche (Left Bank) and the 10 chambres de bonne*  on the top floor.

By incorporating the common areas (staircases, corridors,  etc.) the apartment was enlarged to its current size of some 220sqm.

Removing to Discover
“Eliminating to clear away the encrusted interventions that had followed each other over 150 years, and so returning to the original structure,” explains Valerio Maria Ferrari “was almost an archaeological gesture, as well as being conceptual and material. The most fascinating and surprising discovery was that the structure was designed by Jean-Baptiste Lesueur (architect of the Hotel de Ville, destroyed by fire in the late 1800s) and was of iron – instead of the more common timber – at the request of the owner. At that time there was much talk of a new means of urban transportation called the Chemin de Fer Métropolitain (the Métro), which was to pass not far from there. I preserved this structure, restoring it, leaving it exposed and highlighting it as a series of dark lines that pattern and order the sequence of spaces.

The restoration process brought to light a wall en pierre de taille (dressed stone) with some fossils visible in the stones. From these details observed in the stones it seems very likely that they were removed from the excavation of the nearby Roman Baths, where the Hôtel de Cluny was built.” V.M.F.

Secrets
“The conviction that family and domestic space should preserve secrets to be discovered suggested to me the importance of the mobility of certain elements that could redefine the space to which they belonged, depending on their position.Treating the Interiors in which we live as fixed and unchangeable reduces the fascination and excitement of the relationship we have with this setting. So I thought that in the total redesign of the spaces, places, features, details … I would also spatially define some unexpected obstacles that would compel the occupants to refocus in different ways on things.” V.M.F.

Obstacles and incongruencies
“The most obvious elements of this design approach are the doors which I positioned not just so as to open/close the rooms, but to create unusual, non-orthogonal routes through them which dilate the entrance to the next space (see in the plan office1 and office2). And again on the same floor I created a forced crossing, with low walls that are in part outsized, so as to access the heart of the house with the kitchen divided into a “cooking area” and “preparation area” , so as to create objectively not very easy passages to be traversed. To highlight the circular route through the home I rounded the walls in order to guide the gaze first to the body of the building and then pass from one room to another. In the games room (for the young daughter) I kept the roof dangerously tilted like a tepee, which requires some care when you move about” V.M.F.

A 1:1 relation with art
“In this house are collected many works of contemporary art, by modern and old masters, and many of the finest international design products (CANTA armchairs by Toshiyuki Kita and ORANGE armchairs by Gerrit Rietveld, to name only two). Their position is designed not by virtue of their “decorative” role, but because of their proportional relation to their setting: it is a distinctive form of cohabitation.
For example, the large panel photo by Fariba Hajamadi, covering almost the whole wall opposite the bed, makes it difficult for people to pass by there because  it has the same proportions as the bed and therefore has a ratio on a scale of 1:1 with the only other object in the room.

Under the oil painting by Wilfredo Lam instead I placed two seats purchased in a market, which I later discovered were by Ole Wanscher, covered with a fabric that would relate to the picture, and not just chromatically.

Even in this unusual relationship between recognized works of art and anonymous products I sought to add the element of surprise. I like to think that the value attributed to an object is not automatically derived from the fame of its author, but the role of the object in its setting.” V.M.F.

* A small attic (about 10 square meters) generally intended for the domestic staff living in the building.”

Renovation of an Apartment in Paris by Atelier DCCP Architectes

Apartment in Paris by l’Atelier d’Archi

Apartment in the Historical Heart of Paris by Tatiana Nicol

Reinventing a Hausmannian Apartment in Paris