London-based studio DOSarchitects has sent us photos of the Duncan Terrace project, an extension at the rear of a listed Georgian terraced house in Islington, a neighborhood in Greater London, UK.

This contemporary addition provides a new kitchen, a living room and an ensuite bedroom. 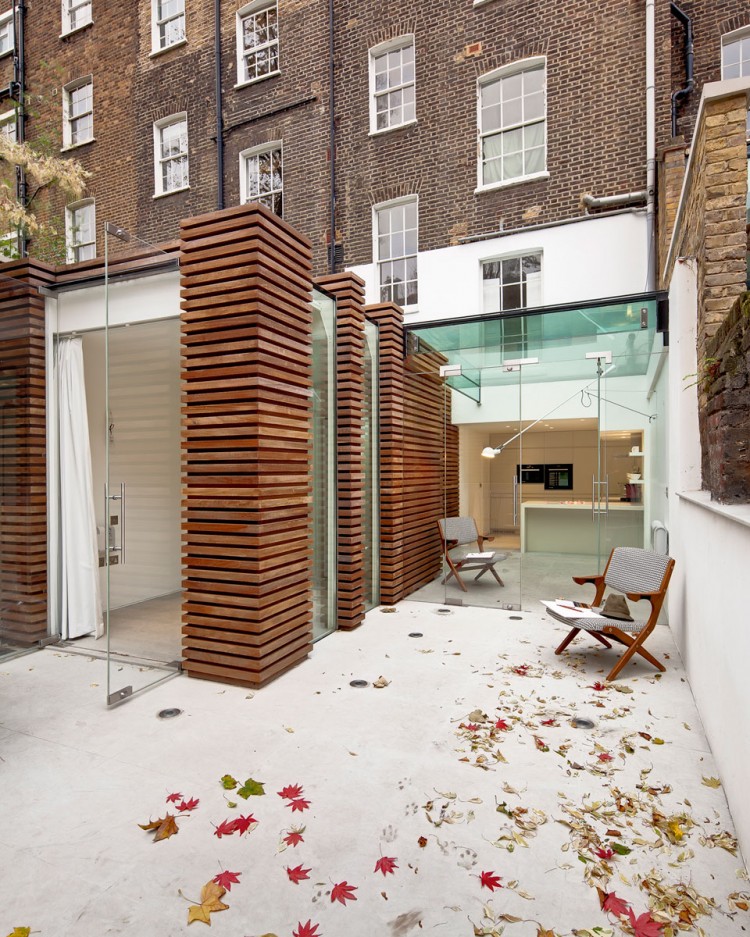 “Our clients’ brief for this project was to add a modern ground floor extension to their Grade II listed Georgian terraced house in Duncan Terrace, Islington. More specifically, they wanted this extension to contain an extra bedroom, a kitchen and a living space which would act as a connection between the house and the garden whilst also respecting the existing Georgian Architecture.

Our response, which obtained full conservation and planning approval, was to create a split volume that, on one hand wouldn’t compete with the existing Architecture and on the other offered a direct link to the house’s surrounding:

The first and more solid volume takes the form of a wooden box which, like a piece of Japanese origami, envelops the bedroom and literally brings a natural element (Iroko wood) from the outside world to the inside.

The second volume, entire in glass, brings natural light into the new living space and acts as a visual link between the Georgian house, the wooden box and the garden. The high tech structural glass used for this volume, moreover, acts as a contrast to the beautifully handcrafted timber slatted detail which envelops the adjacent volume.

Together they sit, comfortably, solid, transparent, old and new.

Approached by a private client, whose requirements were to have one extra bedroom, to be protected from the elements and at the same time to be connected with the external natural land space: we responded with this little gem.

Here, the more private space, the newly added bedroom, which is the protected part, is to merge and become part of the existing vegetation by joining the trees and plants. Whereas the more public part, is to still have a connection with the exterior landscape, but in a more public and exposed way, having a direct link, visual and physical.

Wood was the natural choice for the cladding of the volume, as it relates directly with its live surroundings and vegetation. Details such as the Olive tree, of the same age of the house, 150 years old, are only one of the connections between the interior and exterior.”

House in Edinburgh by Capital A Architecture

Link House by The Ranch Mine

Inside Out House by Takeshi Hosaka Architects