Completely renovated and extended in 2010, this single story home is located in Newton, a suburb of Sydney’s inner west, New South Wales, Australia. 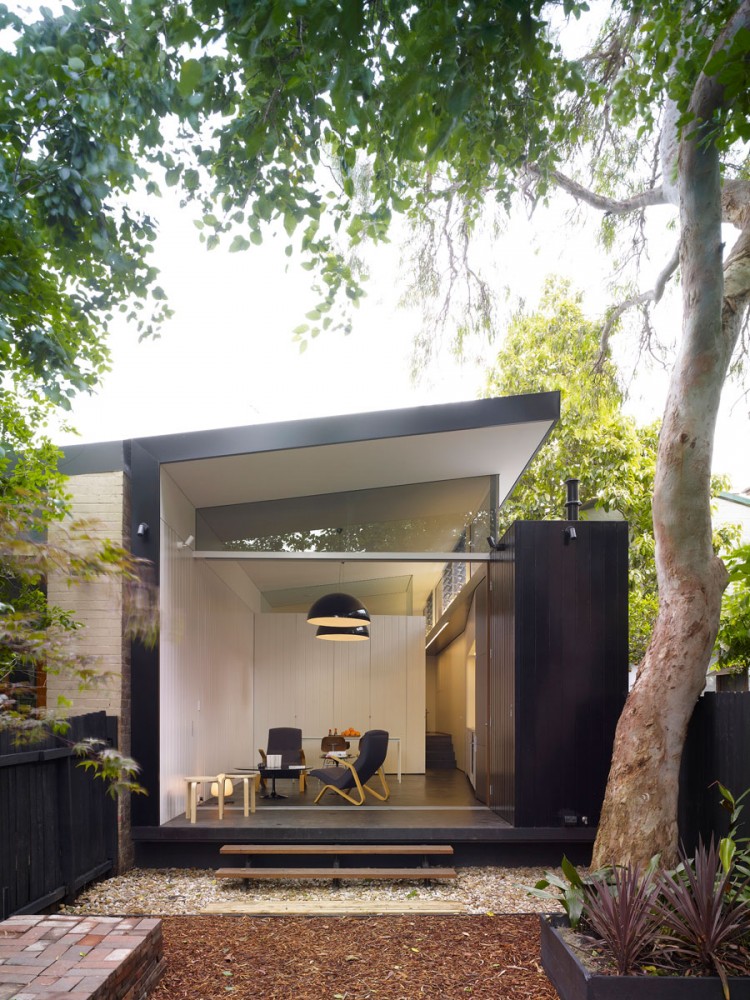 “Haines House is located in the inner city Sydney suburb of Newtown, in an area that is steadily displaying evidence of gentrification in the general upgrade of the surrounding urban fabric. The immediate context is comprised of predominantly single storey attached and semi-detached residences with intermittent 2 storey dwellings and 3 to 4 storey apartment blocks.

The proposal involved the complete refurbishment of an existing single storey semi-detached dwelling with the addition of an open plan volume beyond the original rear existing roof plane, to improve the physical and visual relationships to the new rear garden, while harnessing improved access to sunlight, natural ventilation and views to borrowed landscapes and sky beyond.

The generation of the design entailed two formal strategies:

1. A clear response to place in three acts involved extrapolating the line of the rear roof pitch of the immediate adjoined dwelling to generate the form of the singular roof and ceiling plane, extruding this to the extent of the rear setback alignment of this adjoined dwelling in plan, followed by the extension of an existing low roof level along the unadjoined eastern edge to the new rear footprint – under which a long ‘working wall’ spine accommodates a kitchen, storage and varying configurations of joinery, extending outside to accommodate a second toilet with basin.

2. The retention of the original front dwelling and centrally located bathroom enabled old and new fabric to stitch and enmesh an alternating sequence of compression and expansion, enfolding a series of expressed rooms from the narrow hall and front cellular 3-room layout, to open release in a newly accommodated Living room, followed by a compressed scale shift and downward change in level via an almost secreted passage into the new heightened rear openness of a Dining, Kitchen, second Living space.

Fixed highlight glazing finely connects these newly established bathroom wall heights with the singular ceiling plane, enclosing it from surrounding spaces while borrowing light from three directions. An arrangement of fine steel plate supports and banks of highlight louvred and fixed windows march along and above the entire eastern low roofed working wall, bridging the high and low roofs and wrapping to the rear southern orientation, while a series of pocket concealed timber framed sliding doors extend the living spaces onto a roofed terrace that directly connects to the enclosed private garden and surrounding borrowed landscape beyond.”