Started in 2004 and completed in 2010, this home and studio space, ‘the work of my life’ according to Siza, is located in Porto,Portugal. 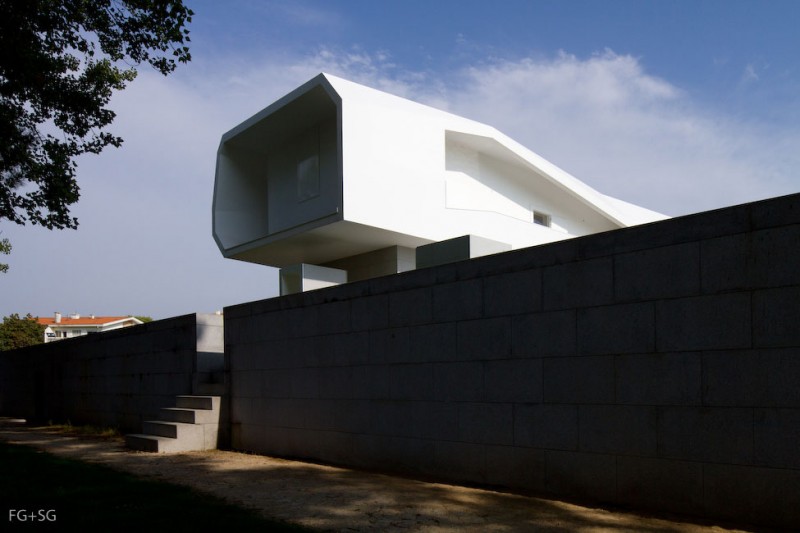 “The act of making architecture necessarily requires a client. At a certain stage in my career I realised that to continue my path I would need to perform that role. It needed a lot of courage to reconcile my aims, interests and goals, to pursue an ideal and achieve a dream. But I also had to supervise, coordinate and direct the project. I started design work in 2004 and finished it in early 2005; construction began in 2006 and concluded in July 2010.

The home is like a laboratory of dreams that represent the motives, the ideas and the tensions. The stories and the emotions condense the symbolism that represent human relations.

The project evolved from a process of free drawing, as if laughing like a clown at the problems, the tensions, the conflicts, the mismatches, all of which were transformed in geometric abstraction… the affirmation, perhaps, of a new classicism. Transitional spaces, porticos, lights, doorknobs, doors, handrails, even some paintings and furniture were specially commissioned, but I also acquired nineteenth century furniture from my family that fit the environment perfectly.

I purchased the site 12 years ago, without access from the street but for a favourable price. Over the next six years I tried to find a connecting site that would make development possible, and it was fortunate that my mother’s cousin owned an adjacent plot. I bought the whole plot and sold part of it with a proposal for a scheme in place, investing the profit in my own house.

During these land deals, the design unfolded as an expression of paradoxical intentions: home/ atelier; interior/exterior area; social/ cultural; private/public; and leisure/ work. The volumes are organised as vertical and horizontal sections, with the atelier facing the street, garages and service areas forming a ‘hinge’ and finally the residence related to the garden. A pool occupies the underground level with the foundations, and public and social areas are in the granite levels above. The ground floor facades express the interior spaces in contrast to the upper storey. Here, the aggression of the exterior creates symbolic tensions, as if the outside is putting pressure on the inside, reducing the volumes and giving rise to a single figurative image. Rigorous geometric abstraction made it possible to develop a constructional system, with lozenge shapes set at different angles so as to form a three-dimensional structure, which in turn gave the right proportions, horizontality and orientation.”

Magritte’s, a Jail-like House in the Heart of Tokyo!