Mexican Agraz Arquitectos has sent us photos of the SJC House project. 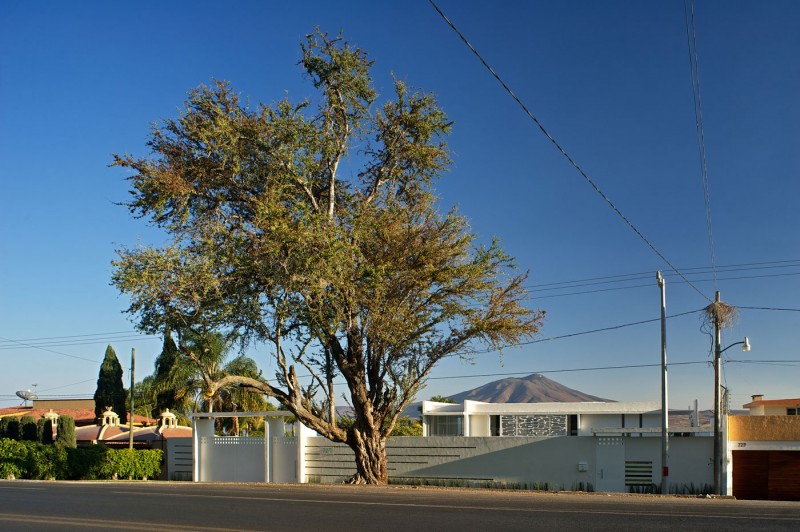 “Located in the edge of the Chapala Lake, the SJC House is a different approach for the firm while being a leisure architecture project. It is a weekend house with the main design goal to permit the view of the largest Mexican natural lake from every single one of its premises. With a North-South orientation and an entrance by the Chapala-San Juan Cosala (SJC) main road, it has a lovely water front. This is how the house is laid within a thoughtful distance from the road, using this space as an introductory garden for the lake.

In the main façade, both car and pedestrian access are placed, generating a plaza that also works as a concealed parking, so that dwellers can forget about their vehicles during their stay. And there too, on the western side of the terrain, is a complete concierge lodging.

This garden which becomes a frontier between the house and the road is provided with a path that leads to the main door and there, a double height lobby where the stairway goes to the top floor. From the hall on first floor is the access to dinning and living rooms, with bar and wine cellar, directly connected to the kitchen that can be integrated but also separated from them by the service areas behind it. This is where laundry, bath and patio, as well as pool dressing rooms are.

And as the great bay and mountain window it is, the living and dinning rooms have continuance on to the terrace where a large sunshade was placed. This spot offers outdoor amusement when the weather allows it, indoors when it rains or both (indoors and outdoors) for different ambiences in one same event. The terrace is also the place where the infinity pool is and where artificial and natural sceneries come together.

Once again inside the house, the “l” stairway leads to the upper hall that enjoys the other view, the one that looks out to the road and the mountains of San Juan Cosala. Conducting to the four hotel bedrooms of the house, designed for family and guests, all have bath and dressing rooms, and here too is where the main suite is with private terrace and viewpoint.

With easiness but not simplicity, the SJC House’s solution is the result of a belvedere that allows the contemplation of light, colors and weather in each one of the year’s seasons of this beautiful and breathtaking Mexican lake that is a natural cyclorama for this water front project.”