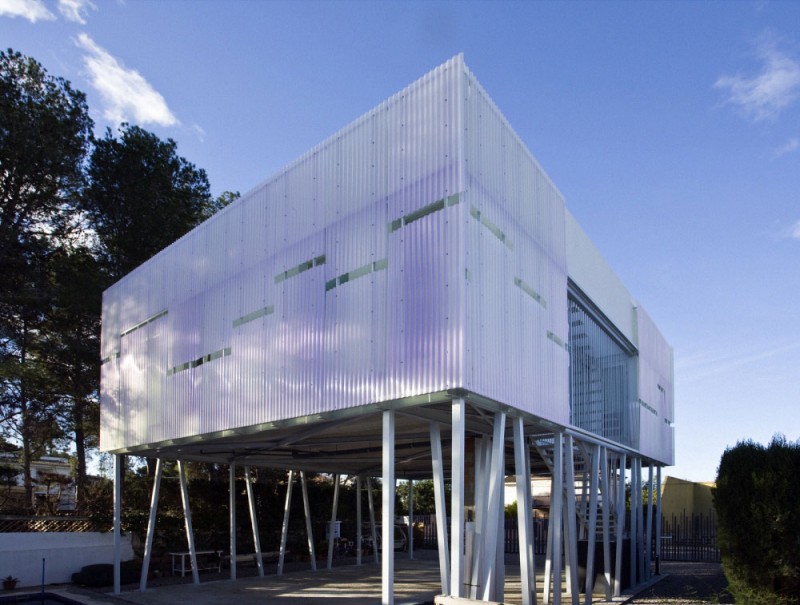 “A project to affirm concepts: A perimeter full of content, indoor/outdoor character of spaces, plasticity of the structure as composite material, definition of areas and uses through flexible technical nodes, and the idea of a deep and solid façade that changes with the quality of the material.

The house is raised up over the plot thus recovering the lost garden. A tree-like structure of metal supports is reminiscent of the pine forest where it is placed, and defines a supporting wall structure over the 9 meter span with the use of hollow core planks.

Circulation is solved in perimeter, a spiral that rises from the garden, via a retractable ladder, to the top, decorating the inside of the house, thanks to a tangential walk of visions through the nodes of service placed transversally to the interior.

This interior space presents 3 sides, two private ones and a shared one. The central side is a new type of space: a room-terrace that might be interior or exterior, depending on the season of the year and on the mobility of the polycarbonate sliding roof.

The lateral sides are solved with technical and storage furniture that shape the space. Thanks to a system of integrated screens, the interstitial spaces have different measurements, functions and nature according to their position.

Looking for an intimist touch, the house is wrapped with a polycarbonate skin of solar and thermal control, torn, offering partial views according to the uses inside. One gets the feeling of diffused light that abstracts the space of the passage of time.

The idea of liquid space is developed here. Inside of it a series of functional nodes are materialized and these nodes are guessed from a changing façade defined by overlapping degrees of lights and shadows, opacities and veils, which make the shape mutable and open to different interpretations throughout the day.”

House AT by MIRAG Arquitectura i Gestió

House in Vincennes by AZC

An Apartment in the City Center of Valencia, Spain

The Skyloft Penthouse in Tribeca