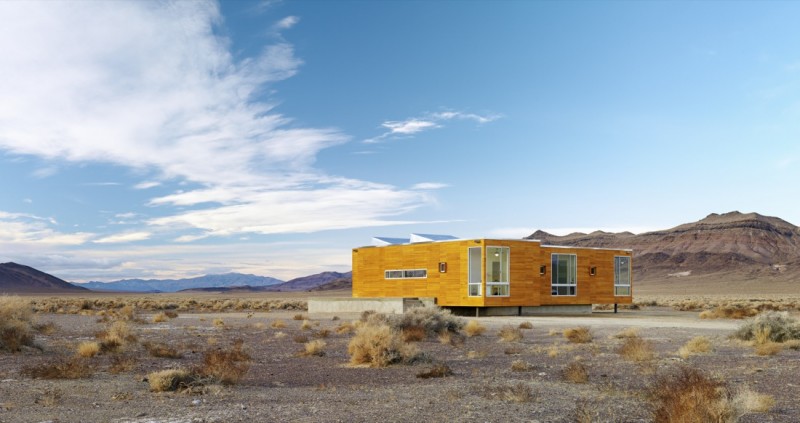 “The Rondolino residence is the prototype of the T-modulome, a prefabricated building system by nottoscale that was first developed in 2002.

Fabrizio Rondolino, an independent writer and author from Rome, Italy commissioned nottoscale to build the T-modulome on an isolated stretch of land in the Nevada desert near Scotty’s Junction. After a couple of challenges that we faced due to the remoteness of the site and the Wild West mentality of the local contractors, the building was finally completed in December of 2010. During the entire process the client and architect solely communicated via e-mail and did not even meet or talk once – and to this day have not met in person.

The site is an isolated piece of land in the Nevada High Desert near Scotty’s Junction and is far from any infrastructure or for that matter any neighbor, which is why we had to scrape a dirt path to the site, dig a well, create a leech filed and bring electricity to the site. After spending several days on the site, nottoscale situated the building in such a way as to take full advantage of the surrounding views, existing wind patterns and the trajectory of the sun.

The client loves the desert and wanted a vacation home in the middle of this isolated stretch of high desert that incorporates the vistas by visually expanding into the surrounding landscape, providing stunning views, while also making the desert part of the interiors – merging the inside with the outside.

One of the main design considerations was to take advantage of the views and to give the owner the feeling to be in the middle of the desert even though when he is inside the home. This is why we introduced large floor to ceiling windows in all living quarters and raised the building on a concrete plinth which seems to emerge out of the desert landscape while overlooking the scenery. This gives the user the impression to float over, yet to be completely immersed into the desert landscape. We also took great care how to place windows so that they frame special aspects of the landscape – the long and low window in the kitchen for example frames a beautiful mountain range which one can only see while sitting down at the dining table.

The house itself measures 1,200 sf, has 3 bedrooms, two bathrooms, an office, a storage and utility room as well as a large open kitchen, dining room, living room area that can extend onto the deck when the large sliding doors are opened. In order to minimize the built envelope the enclosed rooms are kept relatively small while a 9’-0” ceiling together with floor to ceiling windows make the space seem spacious and flooded with light, while visually expanding and connecting the interiors with the desert landscape.

A large 900 sf deck with a sunken-in hot tub connects the two building modules while creating a transition zone between the inside and outside that through the use of large full height glass sliding doors can be completely opened so that the outside and inside of the building seamlessly merge if one desires so.

The building itself sits on a large concrete plinth elevating the building above the desert floor so that it appears to float above the ground while lifting it out of the flash-flood water level. Passive cooling concepts such as cross and stack ventilation, shading, building orientation were used throughout the project.

The House is oriented in such a way as to take advantage of prevailing winds that, through cross and stack ventilation, maintain a comfortable temperature in the house, avoiding the need for an highly energy intensive air conditioning system. The windows facing south are shaded by the large trellis on the deck while all the bedroom windows are facing north in order to prevent heat-gain. The large crawlspace under the house double functions as storage space as well as a climate buffer as it is filled with gravel that helps to maintain a low average temperature below the house throughout the year.

The house is built with high insulating SIP panels and is heated with a radiant heating system that can easily be upgraded to a radiant cooling system if the client desires to do so. Various sustainable systems and approaches were used in order to minimize the physical as well as the carbon footprint of the building.

The architect did not only furnish the entire house but also provided all items that are needed for a stay such as a fully equipped kitchen, stereo system, washing machine, alarm system and tools, so that the client only needs to bring his clothing and food when he comes to the house. Making this a truly turn key vacation home.”

Passage of Landscape by ihrmk

Inside House & Outside House by Takeshi Hosaka Architects

2 Comments to Rondolino Residence by nottoscale