Completed in 2004, this 915 square foot contemporary home is located in Tokyo, Japan. 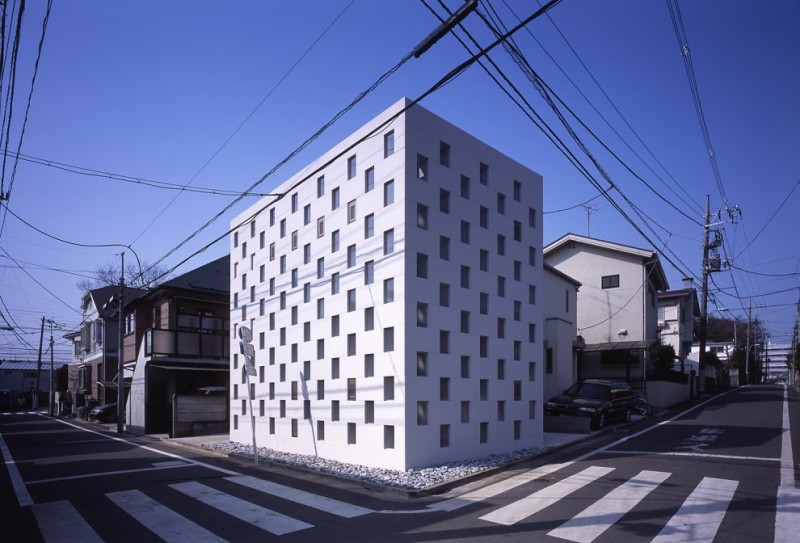 For this particular project, I wanted to accomplish two things. The first was to combine opposing architectonics; the masonry structure which is the origin of the building technique and the skin structure which I have been trying on my projects. And the second was to innovate something that equips structure, function and heat environment altogether.A steel box is designed with the Japanese original module and it sizes 450mm×900mm. The Boxes are piled up with openings that become windows. Considering the heating environment inside, the depth of a steel box was decided as 300mm that serves as brise-soleil. The given depth blocks out the summer sun light and pulls in the winter sun into the house. In addition, a heat resistance material, a special ceramic-infused coating which we have applied for the past Penguin House project, is put on the steel plate. This also helps to solve the heating problem.

For this project, I was especially concerning about and aiming to attain a ‘spacial depth’.Because piled thin steel boxes cannot give depth to a space, I was thinking of putting parting strips and deck shelf (it also serves as an essential structural material) from the beginning.To avoid making a dull space, the interior wall is made like multiple layers and it gives a certain sense of depth. It also makes one to feel as if he or she were in the trees when they are in the house. And when they put their personal belongings in the steel boxes, a ‘life layer’ is added and a layering process comes to the end.

This project is supported by 900mm(width)×450mm(height)×300mm(depth) steel boxes only. A vertical load goes down through the edge of boxes like ‘Ghost Leg’ shape and seismic force is supported by a row of backboards that becomes like a big wall.

In order to pile up the boxes, detailed planning took place over the design, structure, and construction. At the same time, from the very beginning, cost and precision of building frame were crucial topics in the process.

At first, we planned to assemble each boxes on site but the precision of construction, cost and time became problematic. And eventually, we decided to unitize boxes and fuse them with high-tension bolts previously at factory. The size of unit is decided to respond to the size of truck.

We were sticking to the idea of piling up the boxes but the unitizing system rather made us possible to obtain a modern masonry construction technique.”

House in the Pyrenees by Cadaval & Solà-Morales

67 Jalan Binchang by A D Lab