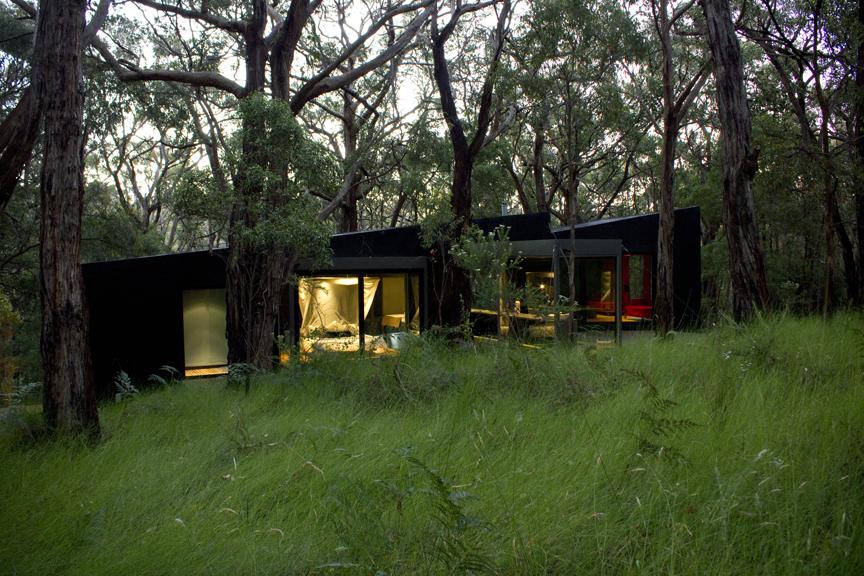 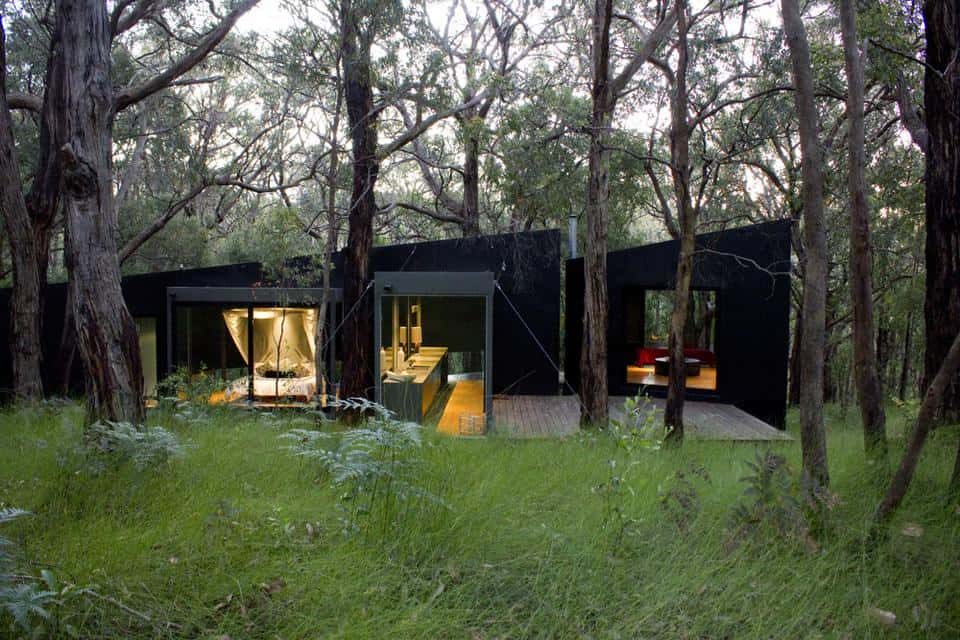 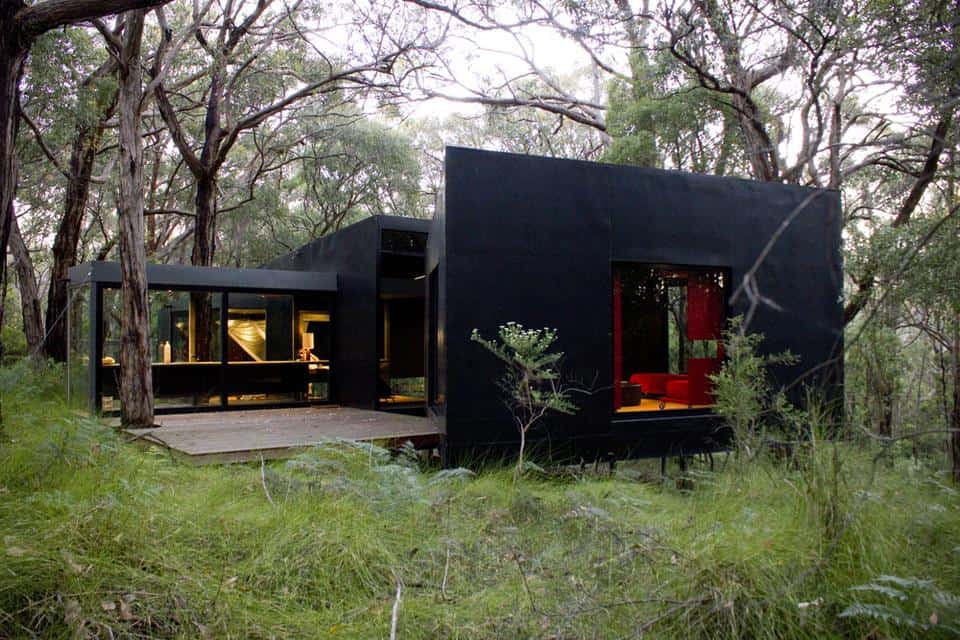 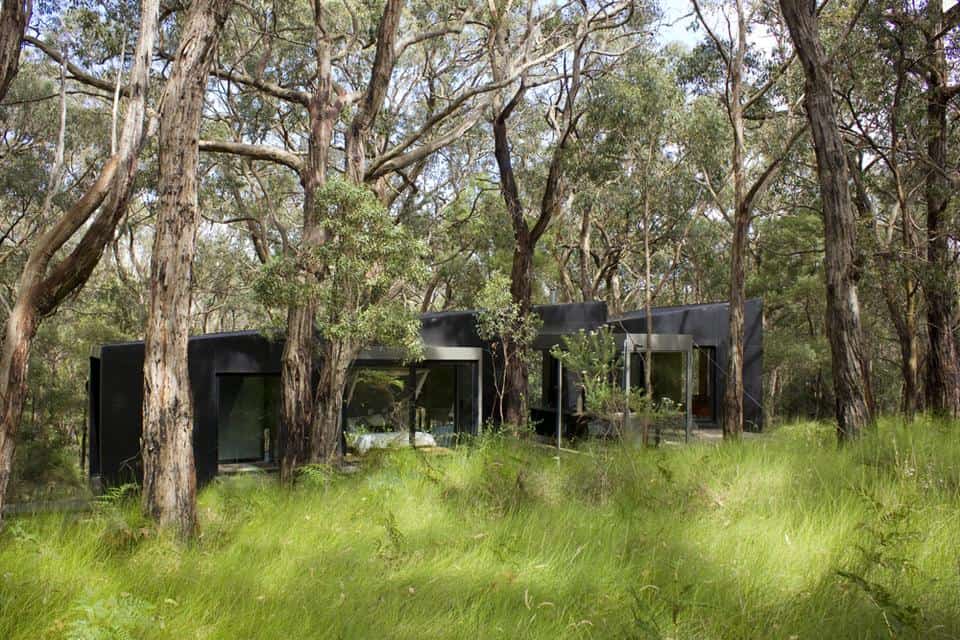 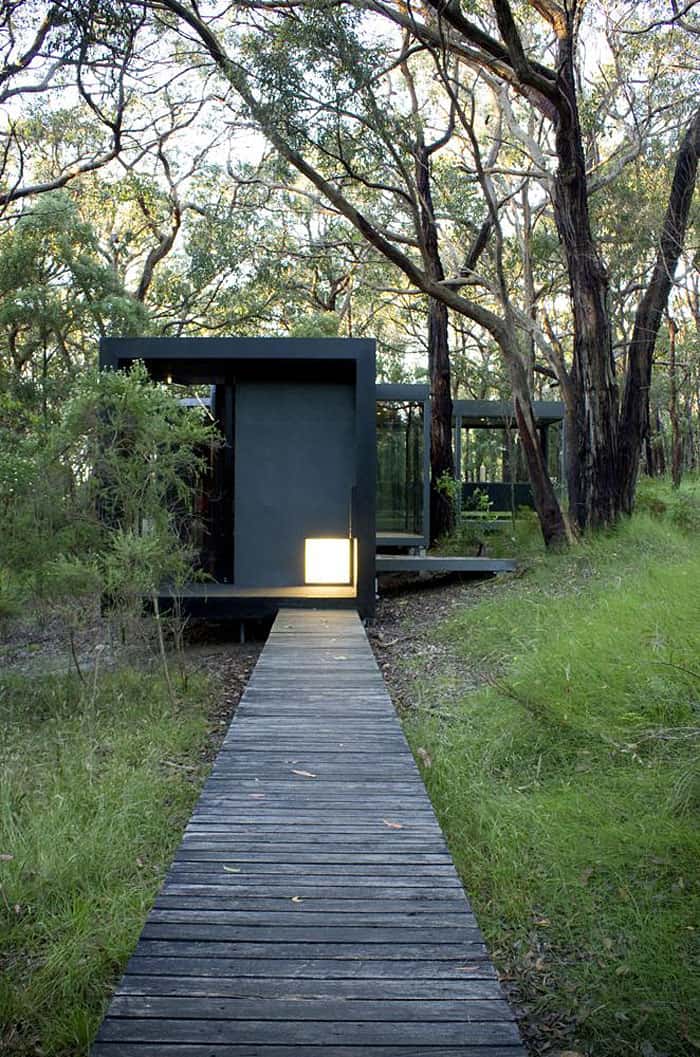 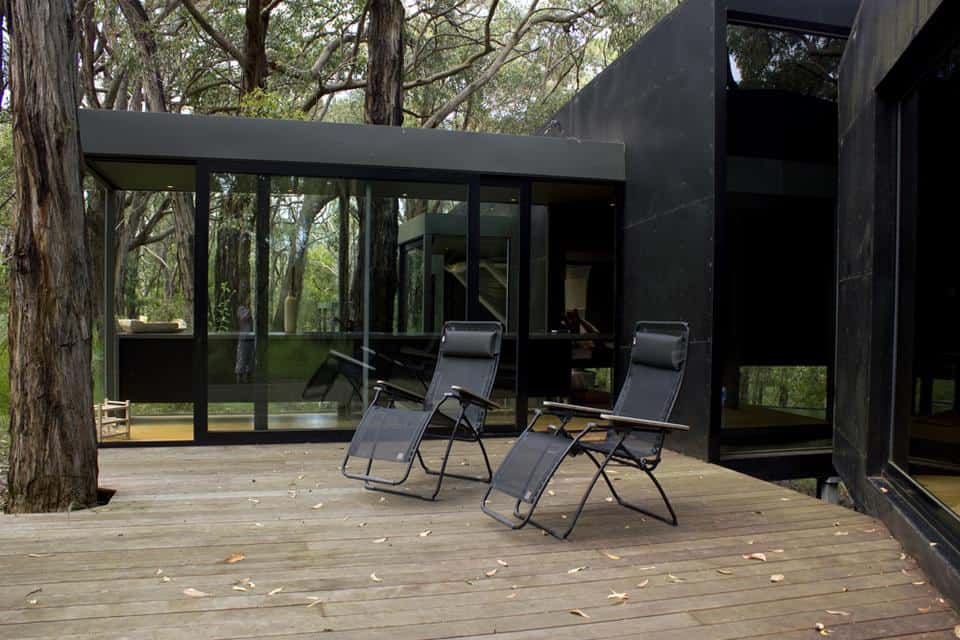 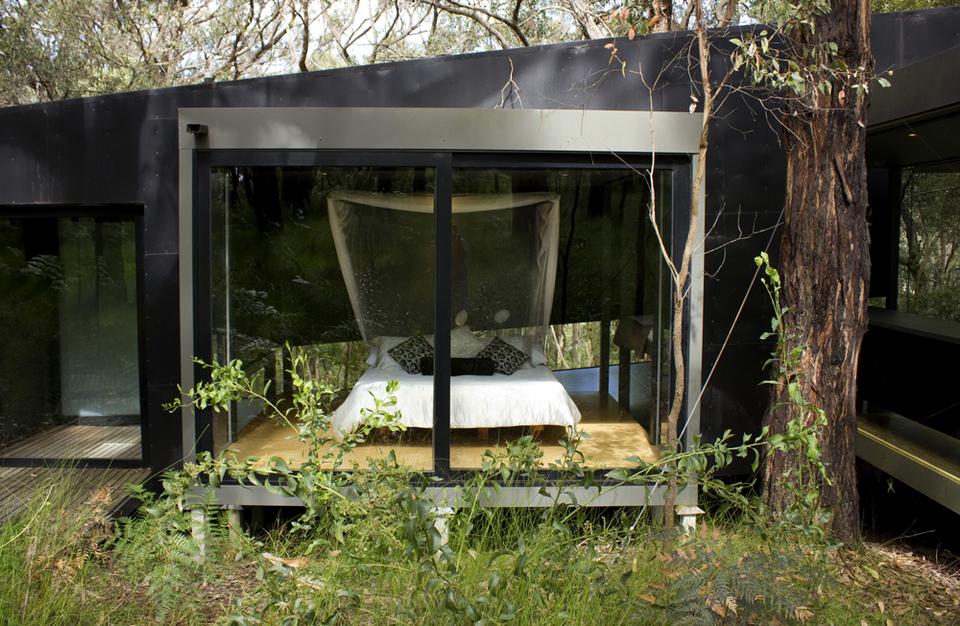 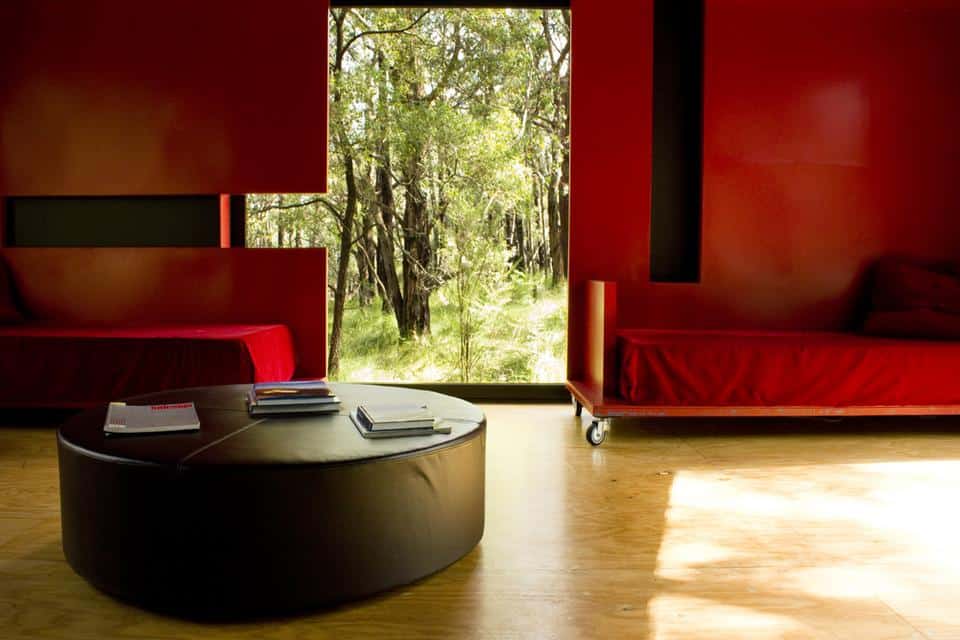 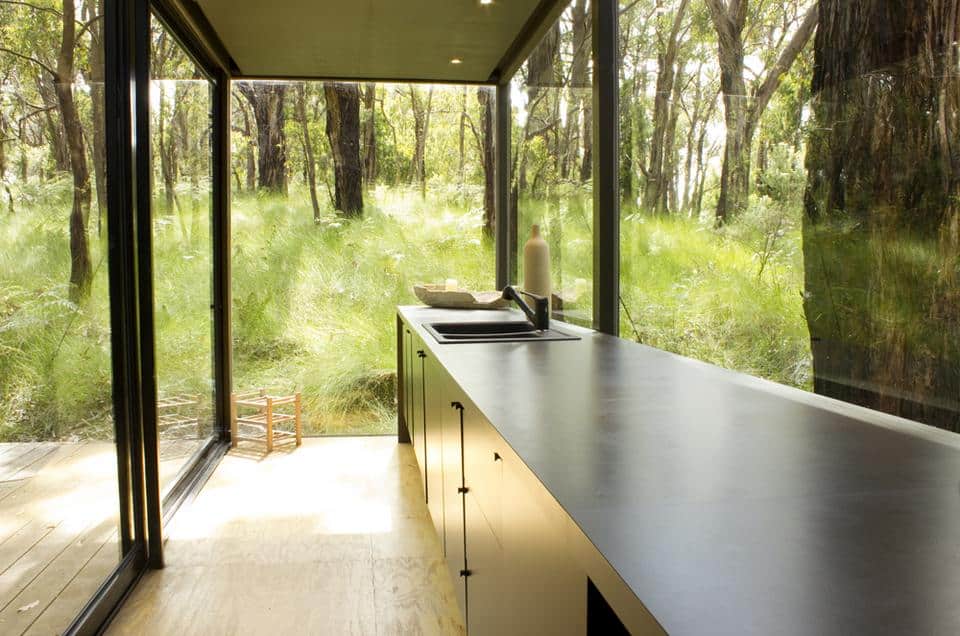 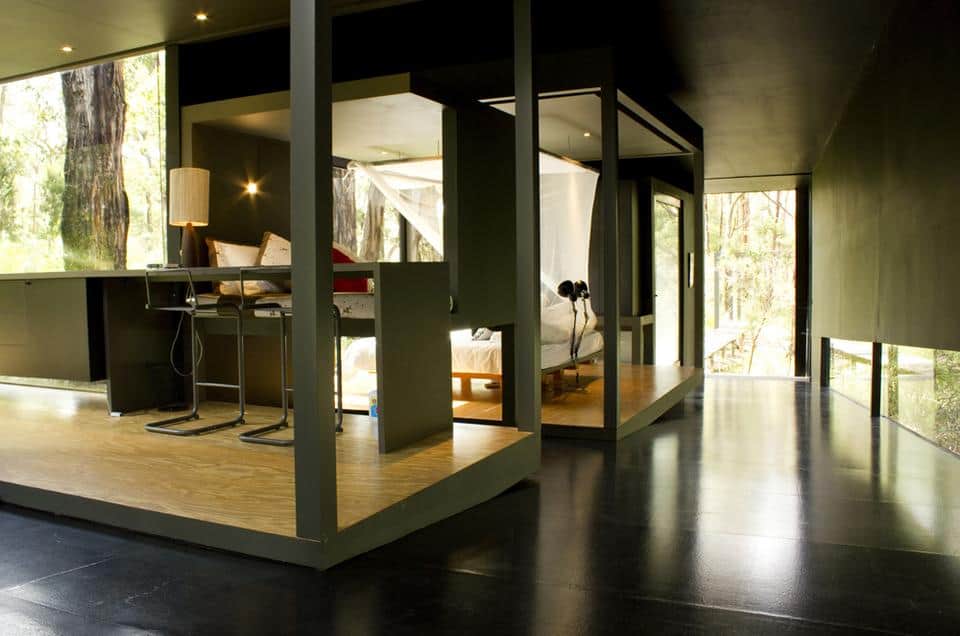 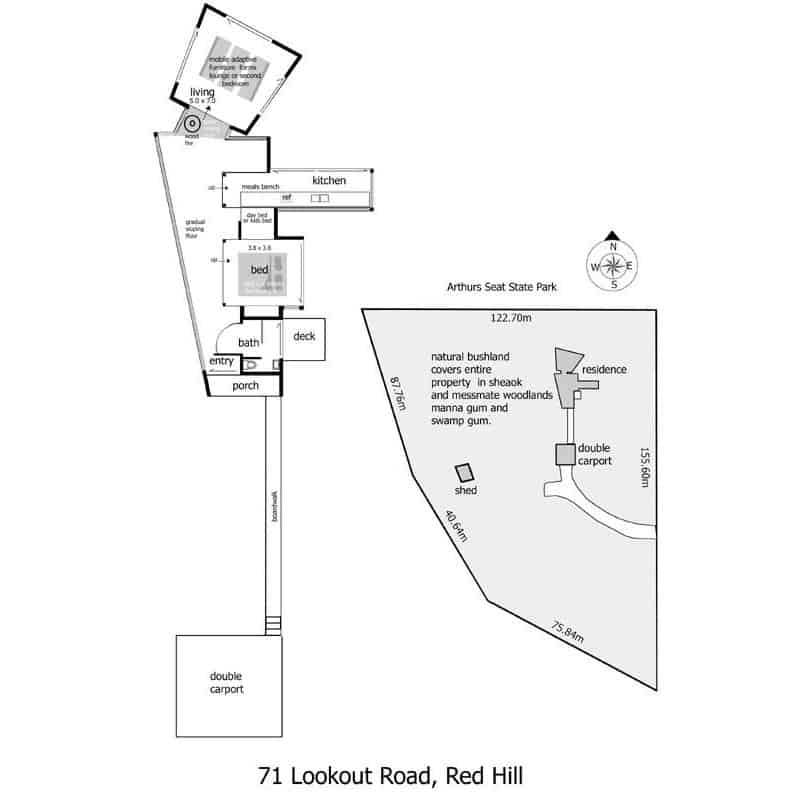 Completed in 2002, this nice contemporary weekend retreat is located on the Victorian Mornington Peninsula, a peninsula located south-east of Melbourne in Victoria, Australia. 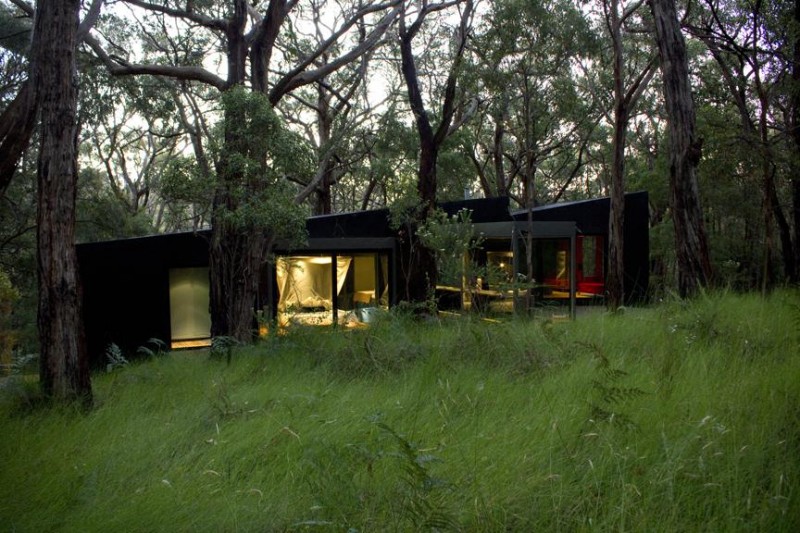 This property will be put on auction Saturday, 14 January 2012.

“Located on the Victorian Mornington Peninsula this house begins in the centre of metropolitan Melbourne. To reach the house one drives for one hour through the flat south eastern suburbs and is rewarded with a slow rise up into Red Hill. Across the Arthurs Seat escarpment the car journey stops in a gravel and leaf strewn driveway. From the car and along the boardwalk expectation is raised for a glimpse of Port Phillip Bay. Once inside the dwelling the ramp lifts your body and spirit higher, howev er the view out the fully glazed end of the ramp is blocked by a detached section of the building.

This glass skin is punctured by a steel bridge that leads into the main room, twisted on axis to true north and on axis back to the central city of Melbourne. Window openings on this room are on all the cardinal points. Views to the Bay and Melbourne are forfeited so one turns back – inward. Lookout house emphasis becomes of the self and not one of external entertainment. On the edge of our metropolis how do we define ourselves, actually, in the indigenous Australian landscape?

Perched on the Pacific Rim with the steadily advancing USA cultural juggernaut on one side and the near East of Japanese exotic and ancient culture on the other. How does a white boy in an old Koori land, an educated suburban boy now indoctrinated by Western architectural history build in this landscape? Lookout house stares into the environment that is plotted and dotted by Kimberley artist Rover Thomas.

Before that Sidney Nolan was exploring an existential alienation in the Australian environment with his Ned Kelly series. Behind the black minimalist object you can sense the intellect, hope and spirit of Australia. The black object is not of the ground but floats over it propped on a stick figure. Floating through the judicial and social systems looking for a peaceful future. The lookout house offers a different view of the future.

It is a metaphysical lookout that although located on top of a hill in pristine bushland is more about being in the landscape and a process of life. About becoming a part of the complex ecosystem that is indigenous. Outsid e the black walls are like shadows strung between the charcoal edged bark of the stringy barks. By night absolute blackness of the landscape merges with the inside black walls. Artificial lighting on the people and furniture inside have an exaggerated theatrical effect. Born of Glenn Murcutts extruded pavilion houses here layers of more complexity and critical connections to landscape are explored.

The large solid tectonic wall and floor planes are tilted and opened to direct ones body. Compressing and releasing emotion into the landscape. Miesian language is cross-polinated with Japanese notions of platform. Fingers of the building reach out to the indigenous landscape to connect and question. Form has a crusty power with the theatrics now on the inside. Plate glass, steel sheet, sliding walls are cut out of the light to make direct, sincere plastic spaces continuing the modernist project in a critical direction.

The lookout house unites the ancient landscape with modern Australia. Taking touch the earth lightly Glenn Murcutt as starting point, four floor levels and ramp have been broken across the contours of the land. Various pavilions are built on top of this substructure determining the spatial flow. Seasonal elements and broader architectural and spatial contexts. The ramp is a culmination of the journey from the city and is also a type of enclosed verandah – linking up and opening up to the functional rooms on the east and closing down to the heat of the sun from the west.

A tatami proportioned and spatially still bedroom cantilevers out to the east with ceilings, bed canopy and bed laying space to the scale of the sleeping body. Gently sliding doors delineate the platform edge against the native grasses and wildflowers outside. An eight-metre long glass box kitchen becomes an aquarium workspace for dwelling and releases the sense out under the tree canopies. This is a Miesian modernist device that secures against coldness and insects. At the end of the ramp is the main room with mixed living, dining, bedroom and terrace functions.

The myth of lifestyle lounge suite concepts have been exploded with the moveable walls with in built sofas. These expand and contract as space within the space. Here the Wallpaper life of slab sofas and beautiful skin is avoided. As the interior collides with the outside how do we attach ourselves to place? How do we make place in our land? We might have to get off our B and B sofas and plant our bottoms in the leaf litter outside. The lookout’s spaces ask what is this relationship. Is it as Le Corbusier drew it as a landscape forming a pretty backdrop to a macho man and domesticated women relaxing on a Saturday afternoon after a week of capitalist exertion.

In this project an uneasy relationship with landscape is described. Silent, blind, visually connected yet emotionally detached. A black box of the mind that locks into the emotional landform of ancient Australia. Taking the debate of ownership and occupation further as Architecture as the mother of art can only do.”

The Shack by Feldman Architecture